Our holiday to Holland this year has, as well as to enjoy the country and time to relax as a family, been an opportunity to make a pilgrimage I have intended to do for many years; which was to seek out the grave of my father's former commanding officer during his service in Normandy and Belgium prior to his death just before the launching of Operation Market Garden and the Arnhem Campaign. 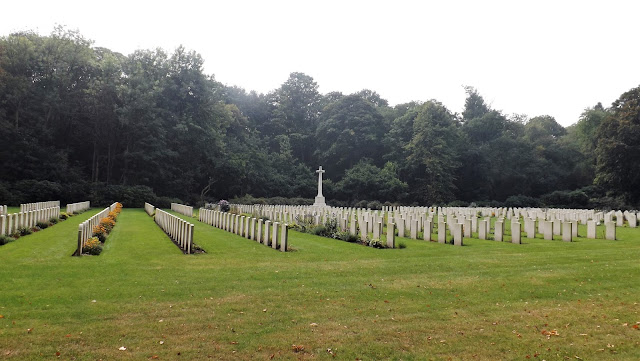 Captain Wilfred Geoffrey Good is buried in Leopoldsburg War Cemetery, run and administered by the Commonwealth War Graves Commission who perform a magnificent role in maintaining this site and the others I have visited around the globe.

As you can see we left a poppy together with some words I read out and left and have shared here.

"Dear Captain Good,
Sir we did not know you in life but have come to know you only from the accounts of my father Sergeant Herby Jones who served with you in the 55th Field Regiment, West Somerset Yeomanry, Royal Artillery, Guards Armoured Division, as part of the 21st Army of Liberation.

Sparing his family the trauma of war, my father spoke little about his war service, but the little he shared with us, his children, always made mention of you and the high regard and deep affection he had for you and the great loss he obviously felt at your passing. I know that a tank crew, through their close shared living conditions and their shared fears in the face of battle became a very close knit family unit one to another. From his accounts  it was obvious that you as the leader of your men in war encouraged a leadership and initiative in them with the warmth and good humour of a father and that is how he described you, as being a father to the crew.

As a father myself I can now understand the great responsibility you carried and can only deeply respect the way you carried it out in the face of battle that I , thankfully, have never had to experience.

I know he would have wanted you to know that your death was not in vain and that because of your sacrifice and the others in the Allied forces that laid down their lives in the fight to rid the world of Nazi fascism we, the generations that have followed, owe you a deep gratitude for having enjoyed over seventy years of peace, free of other world wars, living life in liberty and freedom.

Speaking personally I would like to thank you for being the man my father so deeply respected and loved and to tell you that my family remember you also with a deep affection and have come here today to pay our respects and honour that memory.

Jonathan and the Jones Family"

They shall not grow old, as we that are left grow old:
Age shall not weary them nor the years condemn.
At the going down of the sun and in the morning
We will remember them.

Note:
From September 7th to the 12th before Market Garden, Guards Armoured Division were involved in a vicious battle to liberate Hechtel in Belgium and the 55th Field Regiment were usually attached to the Welsh Guards who played a lead role in this battle.

It seems likely that Captain Good was a casualty in this battle that indirectly lead to the capture of "Joe's Bridge" by the Irish Guards, the start point for the 'Garden' part of Operation Market Garden on the 17th September 1944.