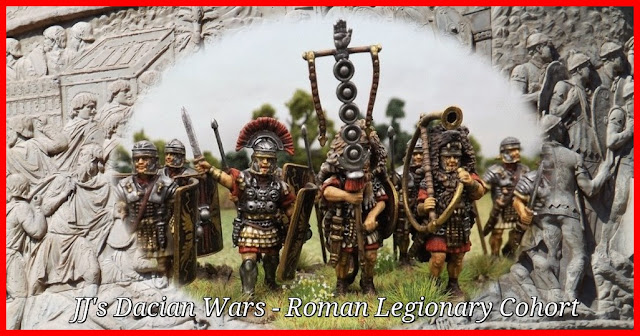 I now consider the Roman collection well and truly under way with the completion of the Victrix Roman Early Imperial Legionaries that I was putting together in the summer during our break in Holland.

I have been so looking forward to doing these ever since Victrix announced the launch with their CAD images of the new figures and they have been such fun to put together and learn my way around with a brush, which is the normal routine when getting familiar with painting a new set of figures.

As explained in my previous post looking at the Dacian Cap Wearer warband I have put together my own basing plan based on Augustus to Aurelian with the idea of reducing the number of bases players have to push around the table whilst still being able to indicate any given formation. 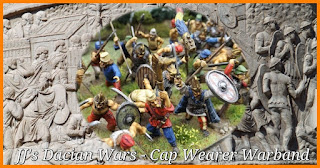 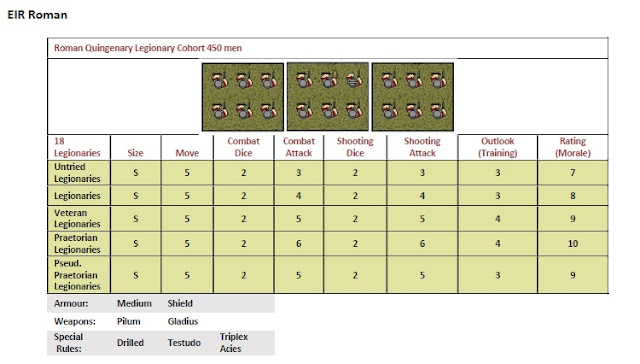 So here is my Quingenary Cohort made flesh or in this case plastic, and what a fine bunch of men they look, ready to create a bit of Pax Romana if the situation demands.

The look of my cohort has a certain symmetry in that I have settled on this three base set up which conveniently mirrors the three maniples of two centuries each numbering around 80 men thus a cohort of 480 men; I have assumed a figure to man ratio of about 1:25 with each of my three bases coming in slightly below paper strength at 150 men, thus a campaigning cohort of about 450 men. 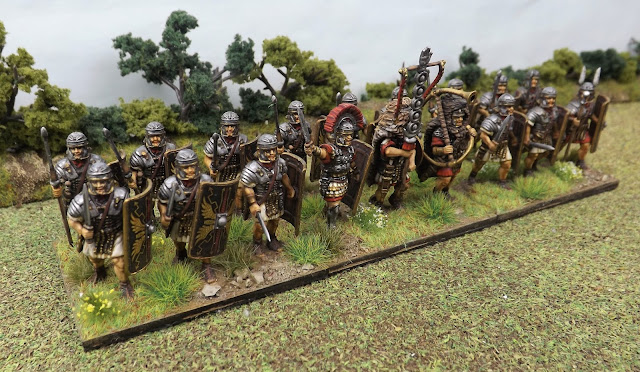 I chose for my first cohort the black shields in honour of the first book that got me interested in this period at the tender age of nineteen, namely John Warry's "Warfare in the Classical World" published by Salamander Books back in 1980 with some fantastic colour illustrations including the one below and the inspiration for my unit, this black shielded or scutum legionary from the 1st century AD. 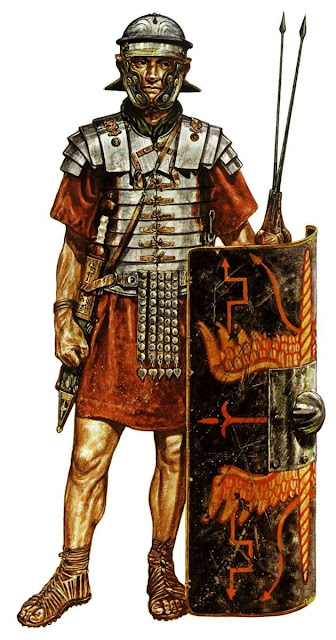 The figures went together very easily and, as I suggest in my little video clip attached below, they provide lots of scope for the scratch builders among us who love messing about to come up with those unique figures in our collections.

The musicians and various standard bearers come with a variety of big beast animal pelts that really make the command party stand out and the cornu is enhanced by taking a pin vice and drilling out the horn mouth to suggest a noise might be emitted from it.

The legionaries can be modelled with two types of imperial model helmets, one having reinforcing bars across the bowl, pugio and gladius scabbards which again adds to the variation for the eye. 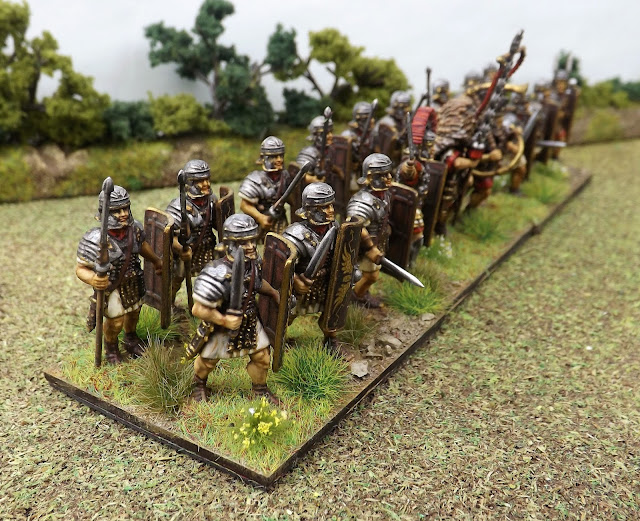 As with the Dacians, these chaps are well defined, with calf muscles that look like they have put in a few Roman miles of marching to get to the battlefield. 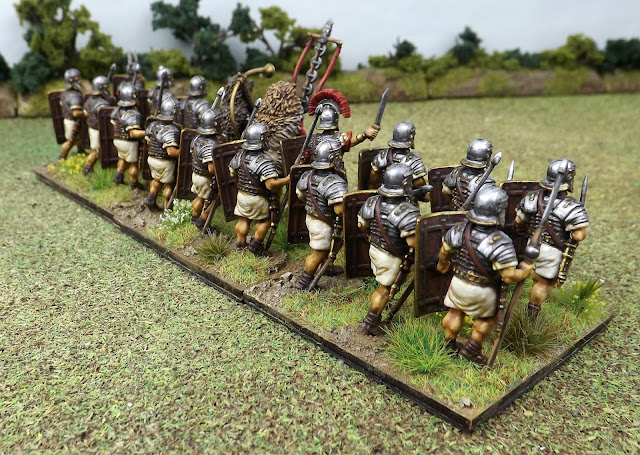 The weaponry is solid and those pila heads look like they could cause a lot of damage coupled with a solid ball weight at the base of the pins holding the long tapering shank in place.

Finally we have the Optio modelled here looking along the line and making sure the dressing is correct and every man is in his allotted place. 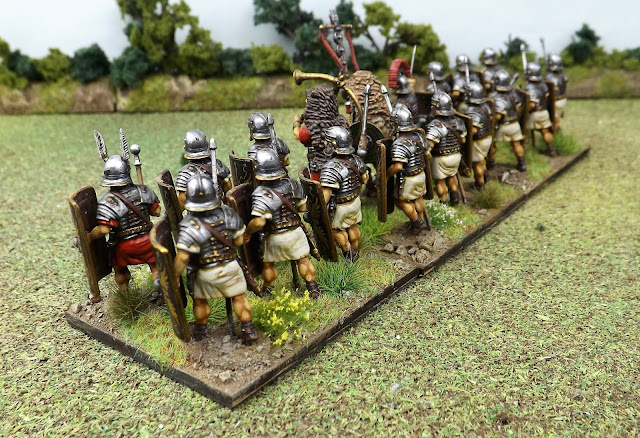 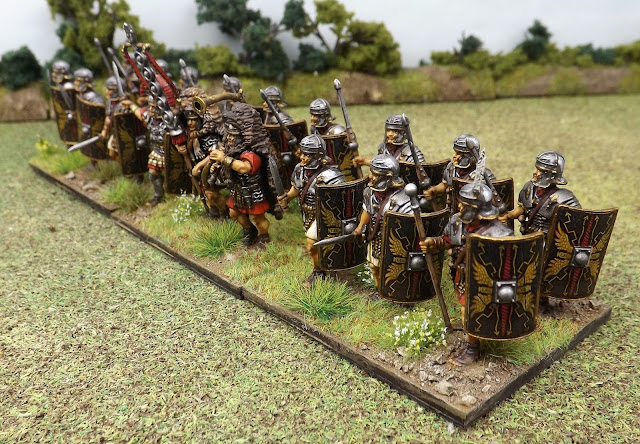 The figures come with oval shields and helmet crests to allow either legionaries or praetorians to be modelled and LBM supply a varied range of shield decals to suit most requirements.

I should say I had a bit of fun, not for the first time, mastering the decals particularly with the pronounced curve on these models that can make detaching the decal from the backing paper a little trickier than normal, but as you can see they really finish the off the figures. 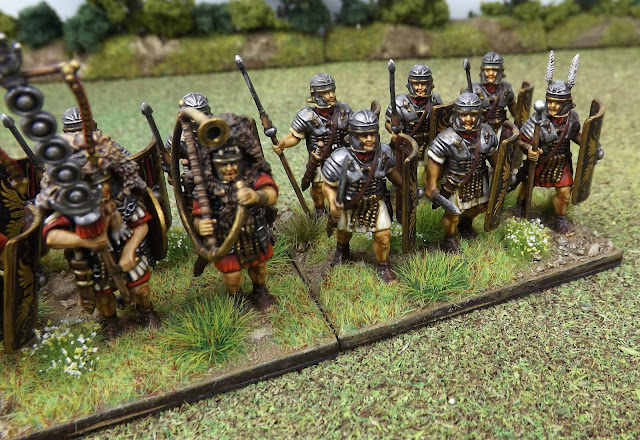 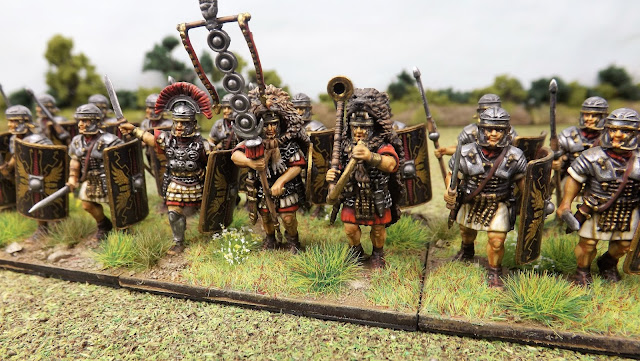 As with the Napoleonics I have added a video clip to talk about panting these and the Dacians, focussing on my colour options for the flesh work, together with a look at some of the books I have been referring to for inspiration or for painting guides.

These little clips are not intended as tutorials and assume you have an idea of how to paint the figures and are more designed to illustrate specifics in the way I paint that you might like to use along with references I have found most useful.

So if you can imagine nine similar units with a roughly equal number of auxiliaries and a first cohort with five instead of three bases with an eagle to wave around plus a few 'donkey wallopers' on the flanks, you have a legion to ready to take it to the Dacian hordes - what fun. 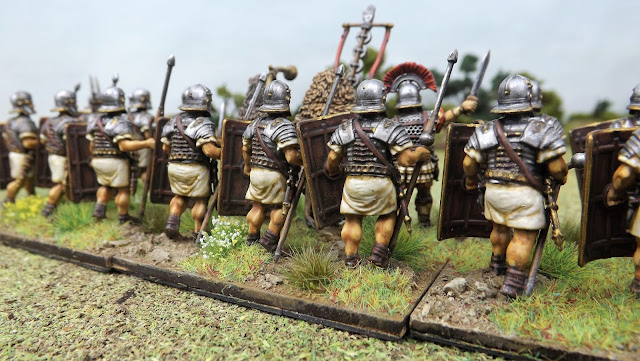