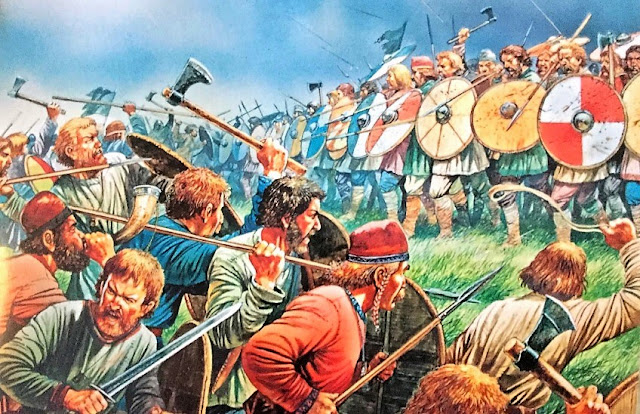 Progress continues to get the Dux Bellorum dark age collection put together, hopefully up to and over the Xmas break so I can then resume work on the Romano-Dacians.

I purchased four boxes of Gripping Beast plastics, one of Saxon Thegns, posted about previously. 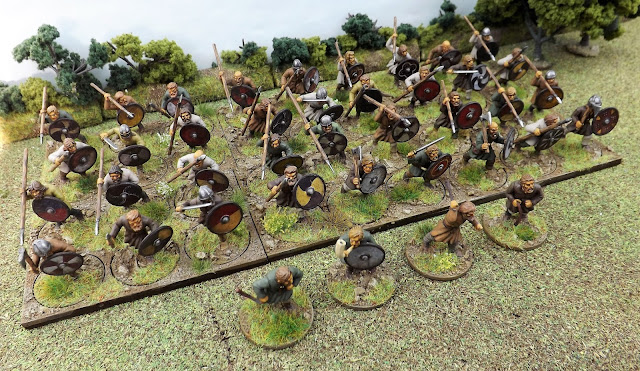 A box of Viking Hirdmen, now on the desk having put them together in Holland this summer and two boxes of Dark Age Warriors, one of which is now done and pictured here.

These four boxes together with some extra metals to add some extra personality and a few different choices will compose my Anglo-Saxon and Viking armies. 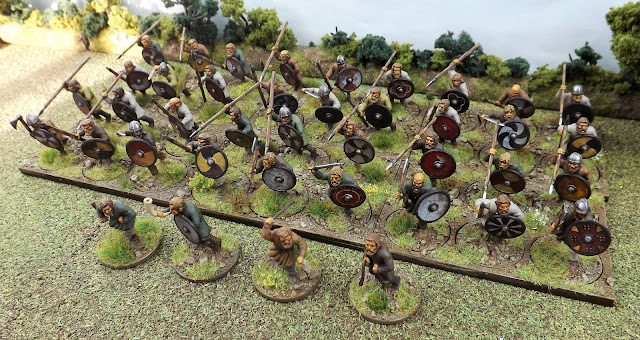 The Gripping Beast Dark Age Warriors allow the collector to amass a relatively generic force of bearded spear carriers that could be found bulking out a lot of the armies of this period and with the addition of a few helmeted and capped heads can be tailored to give a, in this case, Saxon or Viking feel to the force.

Not only that but the inclusion of some slinger arm options allowed me to build the few examples seen here which will be added to with the completion of the second box to provide my two units of such troops for my Anglo-Saxon force choice options. 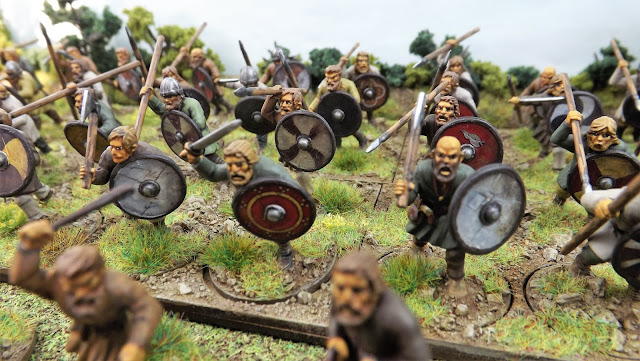 As with the Thegns, en mass these chaps look pretty good and really need just a few banner men and some metal leader characters to finish them off, which is the intention. 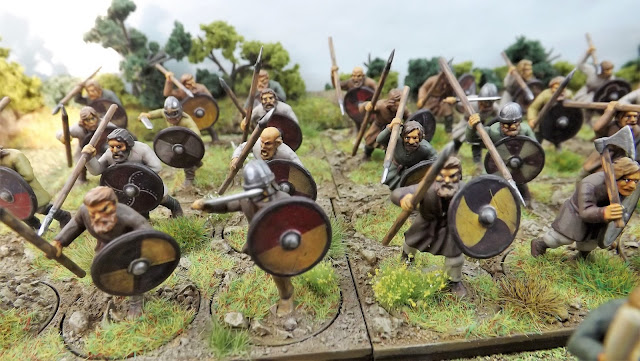 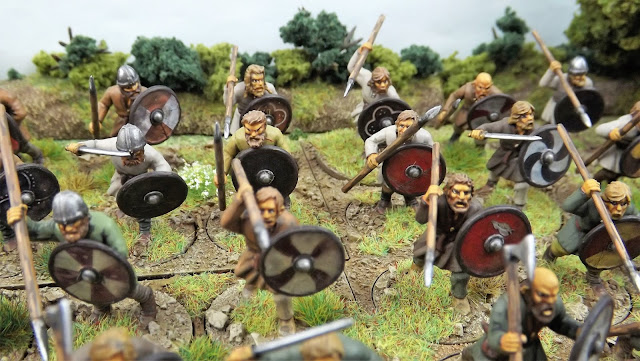 Having played my first game of Dux Bellorum this month at the Devon Wargames Group meeting I have been inspired to get this little project finished sooner than later, just needing to get a few bits of terrain items to dress the table with. 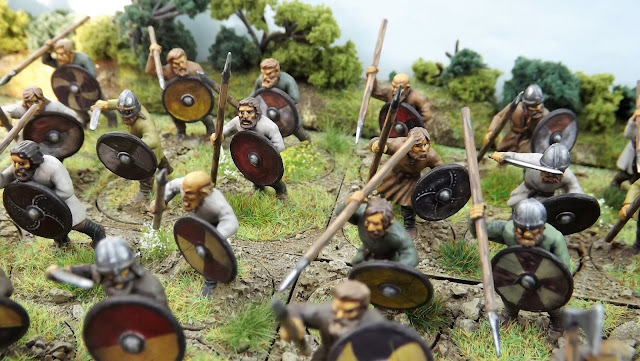 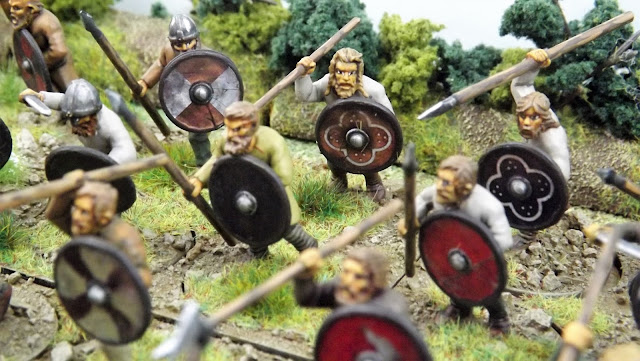 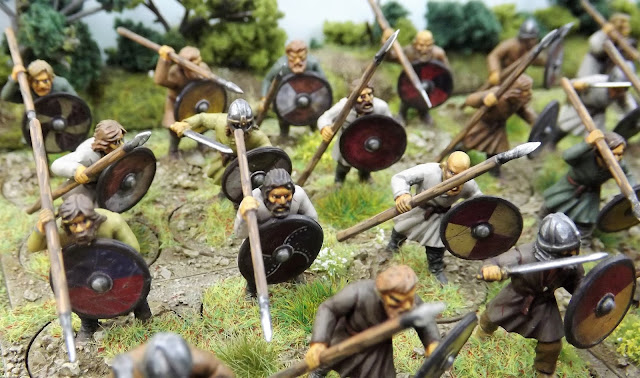 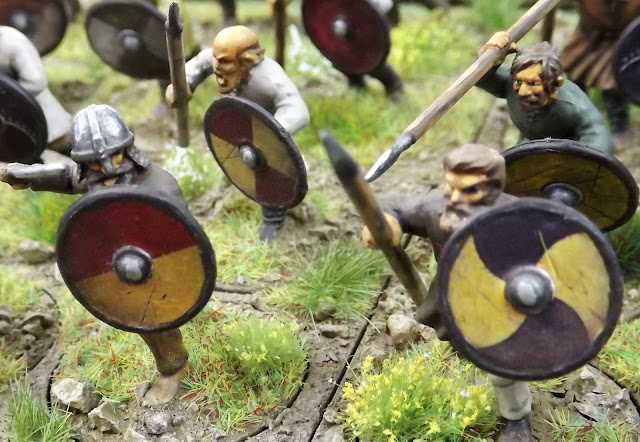 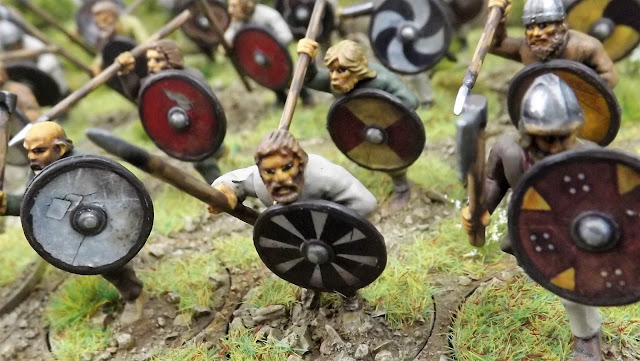 So with fifty percent of the collection done it is on with the Viking Hirdmen which are really nice and seem to capture well the fierce aspect of those men.

As mentioned these figures are the Gripping Beast plastic Dark Age Warriors and the shield decals are the Little Big Men offerings designed for them.

Another consequence of the trip to Reading last weekend is the box of Perry AWI Continental Infantry I picked up, that will provide my contribution to this year's Gus Murchie Memorial Game at the Devon Wargames Group. So they will have to take precedence and be the next painting project to feature.