Regular followers of the blog will have noticed that I was dabbling with a bit of scratch building in between the more regular work of constructing the ship of the line offerings from Warlord Games.
One model not yet offered to the historical naval gamer with this collection of models is what was known in the Royal Navy as a Sloop, the US Navy as a Sloop-of-War or in the French Marine Nationale a Corvette.
All the various terminology describes a ship-rigged, that is with three masts, small vessel, of around twenty guns and the size of ship that drew the boundary between a vessel that was commanded by a Lieutenant, in the Royal Navy, given the courtesy rank of Master and Commander and called a Captain, junior to the next senior rank of Post Captain; a significant promotion that ensured the officer concerned, after a period of seniority, would join the list of officers available to command a rated ship and in time, good conduct and with the right connections make it to flag rank becoming an admiral. 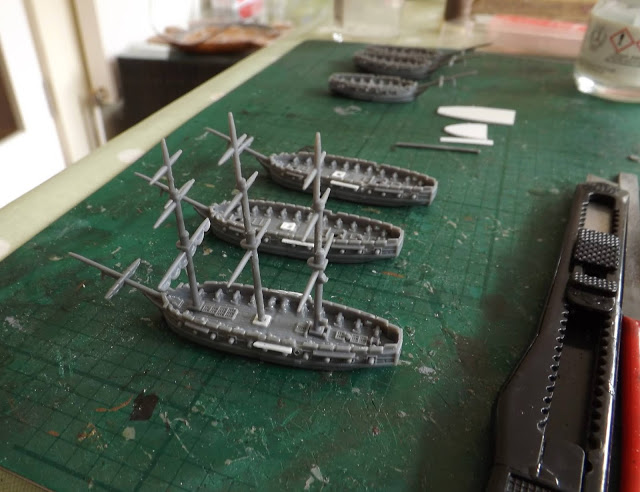 It seems likely that it may take a while for Warlord Games to make this model available, especially whilst busy designing sea-monsters and other creatures of the deep to compliment their range for those collectors so inclined. In the meantime the rest of us will have to start to think of other ways to complete our range of ships that we can use on the table in games that don't require such creatures.
As mentioned, building the hull and additional mast for my sloop, using the hulls and masts from the brig model, required me getting a new modelling saw to make the cut required to the brig and to make a new mainmast together with suitable rigging points for the back stays and shrouds.
Once that was done and the paint job sorted out then I had to think about the sail sets and size up suitable ratlines for the new mainmast. 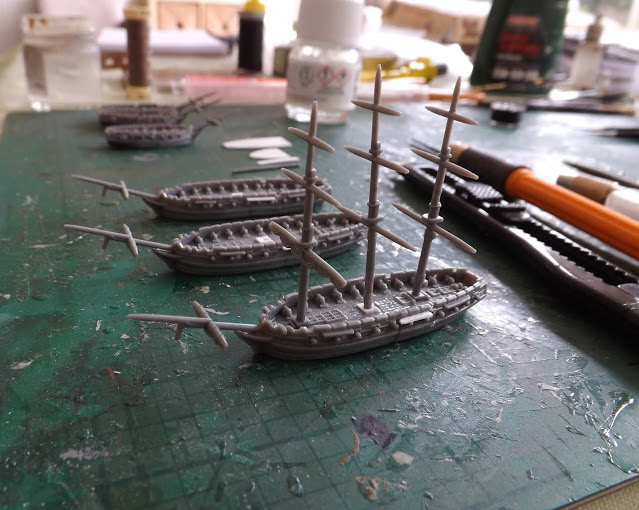 Needless to say, having listened to Christian Rodska read about the exploits of Horatio Hornblower and his twenty-gun sloop HMS Hotspur blockading Brest with the Channel Inshore Squadron in 1803, whilst rigging my Spanish squadron, I decided to produce a British sloop as my proof of concept model, with a French and Spanish version to follow, and here she is, ready for action with her commissioning pennant at the mainmast. 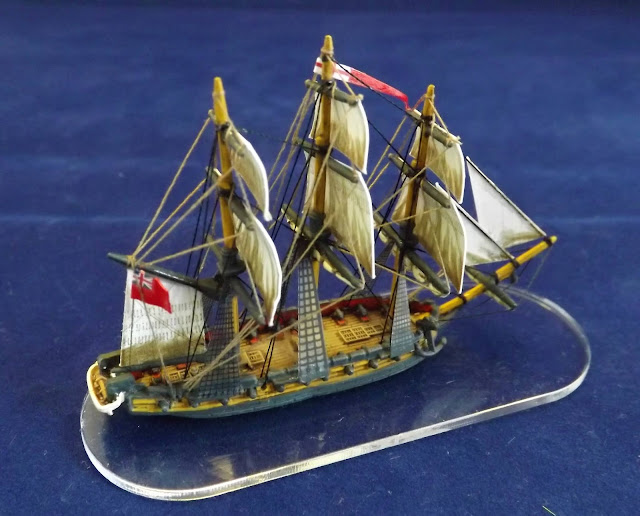 I was really pleased with the final look once she was painted and rigged with little evidence of her hull and mast job to show her original form.
The addition of a boat on the davit to the stern adds to the look of a vessel rather cramped for stowing boats amidships and lacking the spar deck of much larger types. 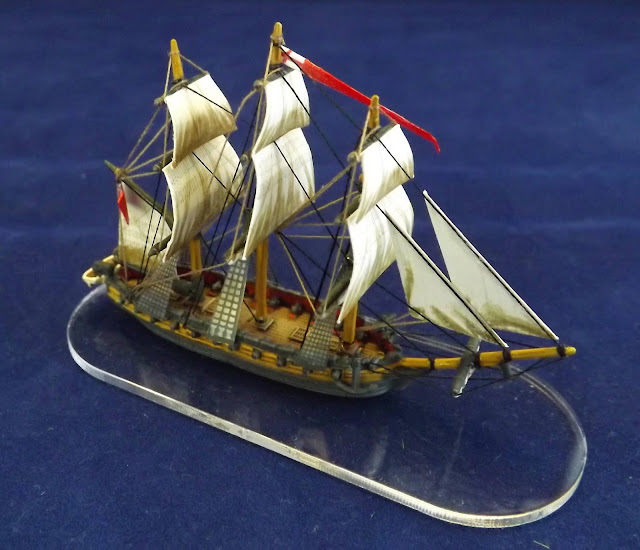 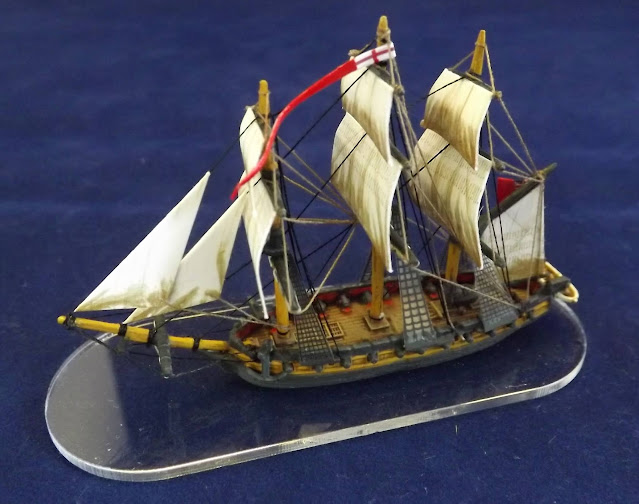 My sloop carries 22 guns, most likely nine-pounders as detailed for the fictitious HMS Hotspur, but she is not the traditional British type, which tended to have a quarterdeck and forecastle rather than the open gun deck seen of vessels such as the USS Wasp. Thus for the purist we might conclude that she has been acquired from a previous owner! 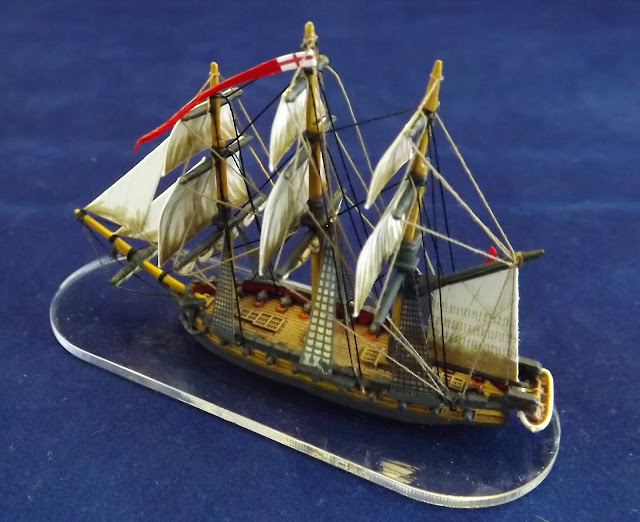 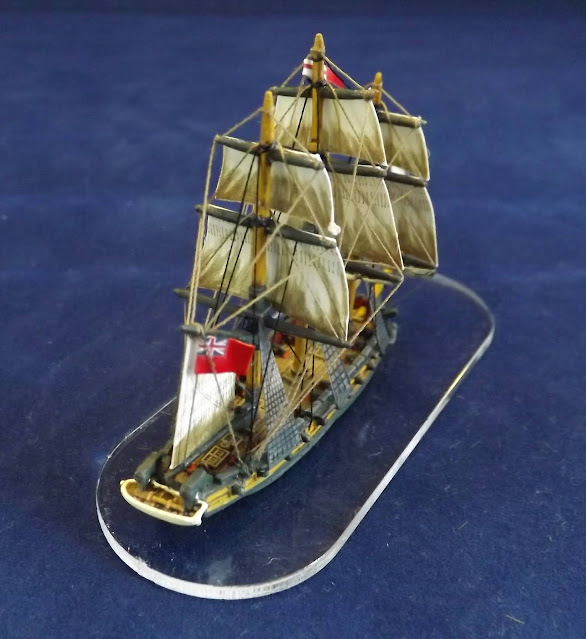 Either way a ship-rigged sloop provides some variety to any squadron of light ships over populated with brig-sloops and frigates, speaking of which, it might be nice to show you how my new addition looks alongside her fellow consorts. 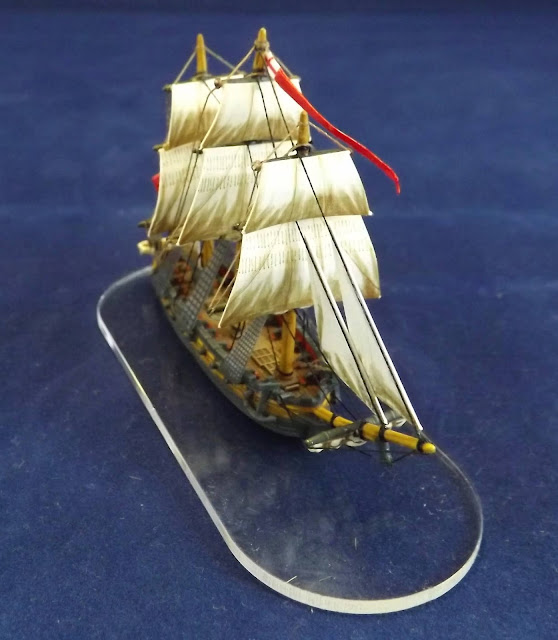 So below we have my new sloop alongside the comparable British brig-sloop displaying her ship-rig lines alongside her less attractive sister. 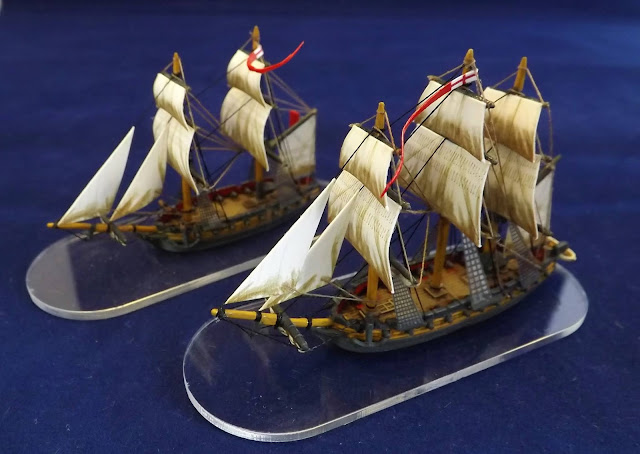 The sloop proved in American hands to be a much better cruizer than the brig in that with three masts it was much more able to withstand damage to its masts and rig than the brig which, once a mast had come down, proved vulnerable due to its reduced mobility versus its three masted opponent. 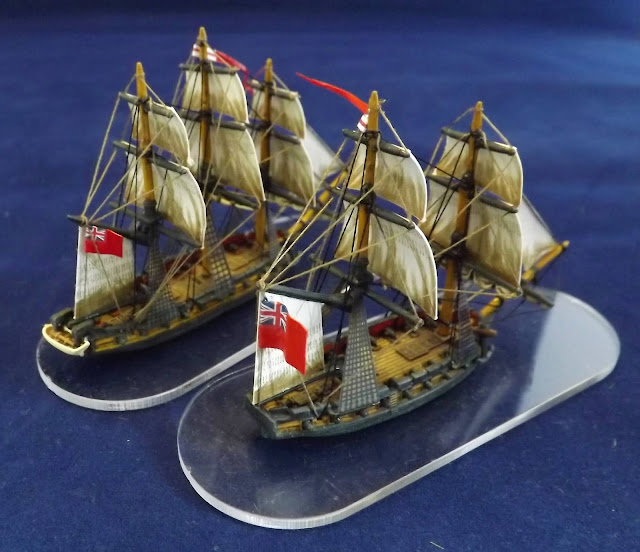 The longer gun deck is very evident with often 22-20 guns versus the typical 16-18 guns carried by the brig. 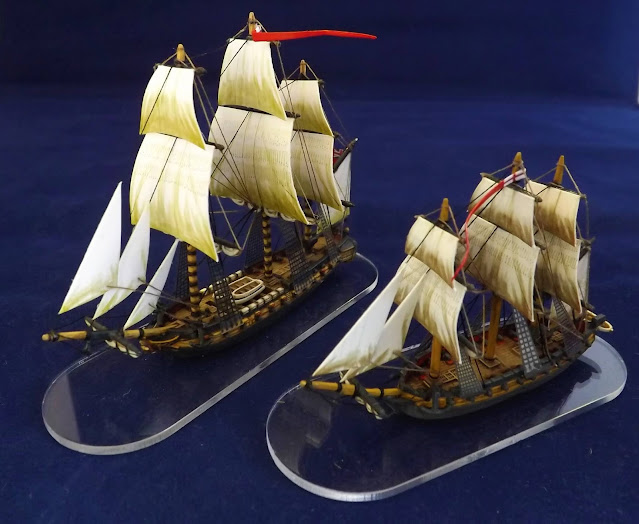 The next pictures, above and below, shows the sloop alongside the 36-38-gun frigate illustrating the jump in ship size commanded by a newly promoted post-captain if he was lucky to get one of the newer frigates to command.
However the sloop was very manoeuvrable in comparison to the larger ship and her more shallow draught made her a very useful vessel to have on hand on the rocky coast of French Brittany looking to intercept inshore supply boats, Chasse Marie's and luggers whilst also looking into Brest or Rochefort to count masts of readied enemy ships. 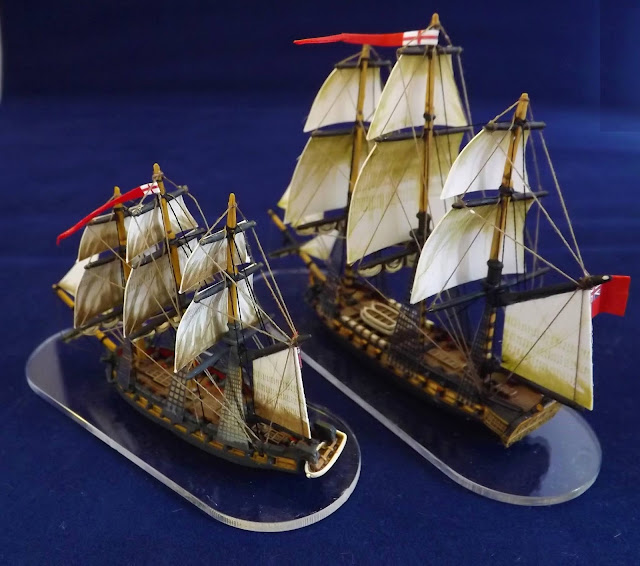 Once my French and Spanish versions are finished I will show them in comparison, but before that I plan to display the rest of the Spanish squadron with the next of my Spanish third rates the 80-gun Neptuno.
Posted by carojon at 09:49