The English Civil War, An Atlas and Concise History of the Wars of the Three Kingdoms 1639 -51 - Nick Lipscombe 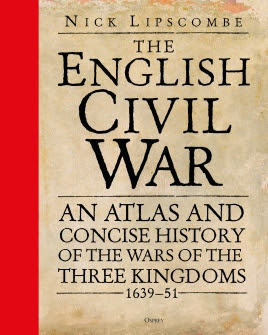 There  are certain books in my rather large collection that I would never be without and consider a fundamental tome when looking to read up on any given period, subject or fact that will give me the detail I'm after.

These kind of books are not the superficial, coffee table items that flatter to deceive with often copious and often colour pictures with occasional maps of subjects that have been repeated ad infinitum but bring very little new or of value to the subject.

When these 'fundamental tomes' come along, it is worth highlighting them for the value they represent and thus it was that I obtained my copy of the newly published English Civil War history and atlas from Osprey and written by Colonel Nick Lipscombe, an author I have reviewed previously here on JJ's with his excellent book 'Wellington's Eastern Front' covering the campaigns fought on the east coast of Spain from 1810-14 and have referred to often with my use of his previous massive work, 'The Peninsular War Atlas' which contributed hugely to my Talavera project and subsequently to my Peninsular War Tour that I wrote about last year.

I well remember pouring over Nick Lipscombe's map of the battlefield of Talavera and working out the specific contours I needed to capture on my table to reflect the nature of the key Allied and French ridges, not to mention the pimple that is the Pajar Vergara and can testify to the sheer enjoyment of having such a perfect reference work to help me in a labour of love that had been long in the planning.

Normally I will read a book from cover to cover and gestate on the contents before delivering my thoughts to you here on the blog, and if they make it to the blog you can feel assured that I have enjoyed the read and can recommend it to anyone else with a similar interest to myself.

The fact that I can say that I have not read this book from cover to cover since it arrived on Wednesday this week, but felt compelled to post this rather concise review should say something, as far as my pleasure at now having this book within my collection of English Civil War references.

So come on then JJ, what's so good about this book and why would I want to get a copy?
Well as a historical wargamer I am always looking for good maps of battle sites and clear overviews of the campaigns that led to them.
Osprey, the publishers of the book, excel at this type of work in their own series of campaign books and that expertise shows here with the glorious attention to detail that I was expecting, having had the Peninsular War atlas to refer to.
As you will see above, the collection of 156 maps in colour is prefaced by a key to the battle and campaign maps including contours in feet, perfect for those of us interested in creating suitable table-top terrain and for identifying key features when out walking these battle sites. So this is definitely a book that you will not find me complaining about how many of, or what quality are, the maps, quite simply these are excellent.
The other key aspect of this book that had me turning to other reference works such as 'The Civil War in the South West' by John Barratt, my usual walking reference book, was my concern that we might have a rather superficial coverage of the campaigns and actions, some of which can be quite small affairs with a few hundred to a few thousand men involved.
Well to illustrate my pleasure, I have included pictures of two of the map plates, illustrating the Battle of Braddock Down fought here in the West Country just down the road from me near Saltash and Liskeard on the Devon-Cornish border in January 1643, only four months after Edgehill.
The battle between Royalist general Sir Ralph Hopton and Parliamentarian commander Colonel William Ruthven only saw 5,000 and 4,000 men on each side respectively take the field and the map above gives a readily interpretable impression of the two armies with pike and musket blocks illustrated together with supporting cavalry.
This is one south west battle site on my list to visit and having a detailed representation and map to accompany such a visit is just the sort of reference to kill for.
Likewise, Mr Steve and I recently visited the battle site at Ripple Field just north of Tewkesbury after also visiting the Wars of the Roses battle site, and a post covering our walk will be posted soon here on the blog.
The action between Waller and Prince Maurice was an even smaller affair than Braddock Down with about 2,000 men on each side fought in a field with a slight ridge at one end on which sat Waller's horse.
It was really pleasing to see how well a small action like this was represented in the accompanying maps of the fight and the marching that led up to it and careful examination of the map shows the position we visited situated as it is between a rectangle of narrow lanes and with the ridge shown in the coloured contour levels.
I wish we had had this map on the day, and I will show the pictures of this battle site later, together with a view down the Parliamentarian ridge after Steve and I edged our way around a nearby field to get the perfect view, plus pictures of the pretty hamlet of Ripple, with many buildings little changed from the outside since 1643. 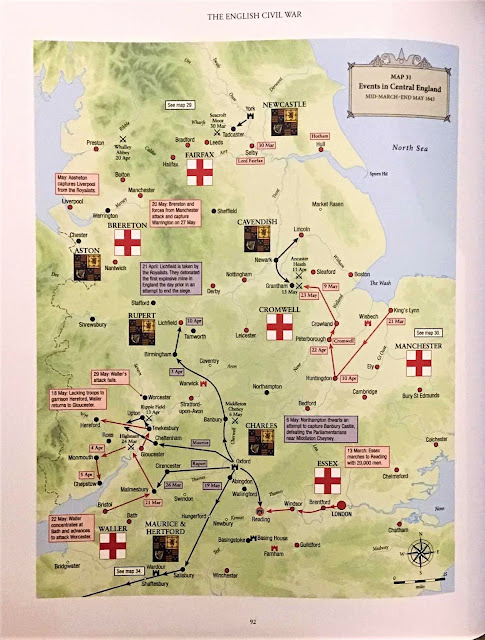 As well as the battlefield maps, the book captures the key details and movements of the King's and Parliament's and their allies forces in a chronological history covering the origins of the conflict in 1639-40 right through to the Interregnum of 1649-60 and the Rule of the Major Generals 1655-57 with maps covering the actions for the whole of the British Isles and Ireland.
The history of the war is broken down into 44 chapters making it a relatively straight forward reference work to be able to research a specific time period or campaign with those glorious maps illustrating key strategic movements as seen in the illustration above.
This is a relatively short summary of this book and I have not read the contents from cover to cover and if my experience of owning the similar Peninsular War Atlas is anything to judge, I am very unlikely to, because this book for me is a dip into reference about aspects of a very large and wide ranging war that has battles and campaigns I am very interested in to others for which I have a passing interest and want to be aware of for completion in my overall knowledge.
The writing covering each section is detailed enough to capture the key facts, with a book on that specific time period or campaign something that I would read in conjunction, but with Lipscombe's maps complementing both accounts.
Speaking as an historical wargamer interested in playing games and recreating actions from the English Civil War, not to mention dreams of campaign aspirations and the enjoyment of walking these battle sites, this book is a well-spring of information that supports those interests and I know I will be referring to it again and again.
The book is hardbound with gorgeously stiff paper making up its pages that number 367 from cover to cover.
Written with the support of the Battlefields Trust this book is likely to be a cornerstone of reference for the foreseeable and if like me you have the slightest interest in the English Civil War, this is a must have inclusion for your reference library.
The English Civil War Atlas is published by Osprey and has a recommended retail price of £55.11, but I got my brand spanking new copy via Amazon Prime for just £32.99 including free delivery, which is an absolute steal for such a stunning book.
Recommended
JJ
Posted by carojon at 02:15