Broke of the Shannon and the War of 1812 - Tim Voelcker 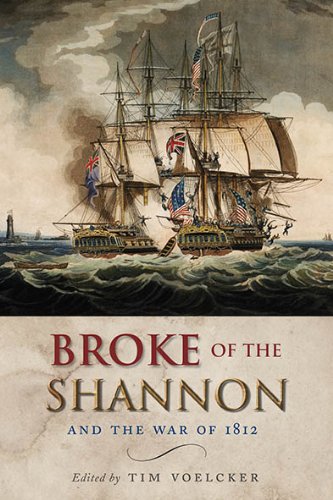 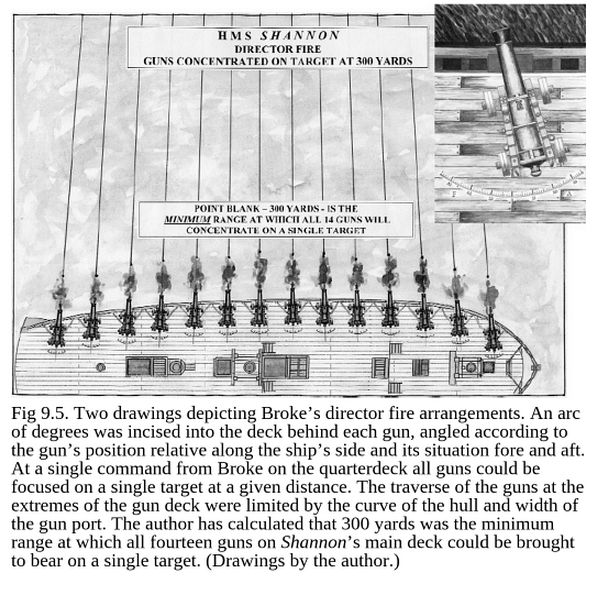 In a twelve page chapter accompanied by five illustrations, Bibbins recounts a most remarkable series of adaptations, improvements and new techniques and equipment modifications coupled with organisational improvements that Broke introduced the crew of the Shannon to with much of the equipment modifications financed out of Broke's own pocket.
As well as building on the gunnery standards of leaders such as Vice Admiral Cuthbert Collingwood, Nelson's second in command at Trafalgar and a leader in gunnery tactics, which introduced the idea of speed in loading and firing with the necessary teamwork and practice to achieve a rate of fire equivalent to three broadsides in three and half minutes, Broke introduced his ideas which created tables of recommended loads of projectiles and powder for achieving specific results against different targets, aiming to either dismast, disable, rake or silence the target and the variations to be accounted for with range, sea state and swell.
To help with these refinements, he had his guns fitted with locks and tangent sights, with the former using quill primers in the touch hole allowing the gun to ignite almost as soon as the gunner pulled the lanyard to fire, thus overcoming shooting too high or low because of the delayed ignition coupled with the roll of the ship. 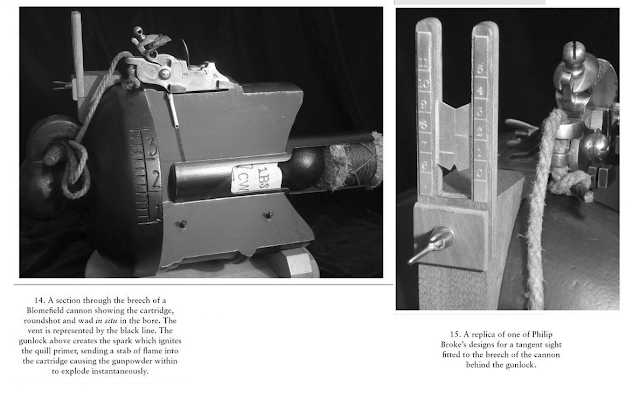 The sights added to the process for the gunner to pick out masts by aiming along the gun using the tangent site to allow for range and knowing the horizontal pitch of the gun precisely and being able to look along the barrel using the sight even as it was fired with its subsequent recoil; all these aspects being difficult if not impossible for guns fired simply by pointing in the general direction and using a lighted match with its consequential delayed ignition.
Broke could now have his gunners set up their guns according to how he wanted to direct the horizontal fire of his battery and, with arcs in degrees marked out on the deck behind each gun, all or some, in specific groups, could now be angled under command to focus their fire in any particular direction with the arc laid out, permitting him and his officers to direct their gunfire like never before.
One final rather unique modification was Broke's addition of his 9-pounder barbette guns, having his 9-pdrs on the forecastle and quarterdeck mounted on higher brackets that not only allowed the guns to fire over the bulwarks instead of through them via a gun port, but also to be able to elevate up to 33 degrees and able to combine their cross fire to sweep an enemy deck or shred its shrouds and rigging.
Alongside these changes Broke worked his crew up to a high state of efficiency with constant training on the great guns and small arms throughout the week except weekends, given over to the housekeeping of the ship and the spiritual requirements of the men.
After reading this particular chapter the events described in the next one looking at the battle and its short but conclusive outcome suddenly fell into place as the action described illustrated this killing machine in its dreadful work as HMS Shannon dismantled her opponent with precision with her barbette guns wreaking havoc in Chesapeakes tops and rigging raised to maximum elevation, whilst other 9-pdrs targeted her helm. The top deck was soon cleared in the maelstrom of metal from cannon and muskets seeing Captain Lawrence carried below, hit by two musket rounds and leaving the way clear for the Shannon's to board during which Captain Broke would sustain a sabre slash to the head that might have killed most men.
The difference in firepower exchanged in just ten minutes is staggering, with Shannon hitting Chesapeake with 44 round shot and with Shannon receiving just 10 or 11 in return, with much of the American shots hitting the coppers around her waterline.
Chesapeake's crew were not raw or inexperienced as three quarters of her crew, 279 men had sailed before with her previous commander, with 32 recognised on capture as British.
The casualty rate was another staggering consequence of this battle with Chesapeake losing nearly as many men in eleven minutes than HMS Victory (159 casualties - 57 killed and 102 wounded) at Trafalgar in several hours of fighting, seeing the USS Chesapeake receiving 146 casualties (69 dead and 77 wounded) and HMS Shannon 83 casualties, (34 killed and 49 injured) in return, with the action as a whole seeing more men killed per minute than in both Nelson's and Villeneuve's fleets combined.
Broke of the Shannon and the War of 1812 is 237 pages and contains the following:
List of Illustrations and Maps
Preface and Acknowlegements
Notes on Contributors
Introduction - Tim Voelcker
Historical Note and Brief Family Tree
Chapters
1. The War of 1812: A Perspective  from the United States, John B. Hattendorf
2. Sideshow? British Grand Strategy and the War of 1812, Andrew Lambert
3. Canada and the War of 1812, Chris Madsen
4. Prize Laws in the War of 1812, Gabriela A. Frei
5. Victories or Distractions, Honour or Glory?, Tim Voelcker
6. Broke - His Youth and Education, John Blatchly
7. In Arctic Waters, Michael Barritt
8. Letters to his Wife 'Loo', Ellen Gill
9. A Gunnery Zealot: Broke's Scientific Contribution to Naval Warfare, Martin Bibbins
10. The Battle, Martin Bibbins
11. Broke's 'Miraculous' Recovery, Peter Schurr
12. Representing Nations: Caricature and the Naval War of 1812, James Davey
13. Halifax and its Naval Yard, Julian Gwyn
14. HMS Shannon's Later Commissions, Martin Salmon
15. Chesapeake Mill, John Wain
16. Ballads and Broadsides: The Poetic and Musical Legacy of the Shannon and the Chesapeake, Richard Wilson
17. The Peace and its Outcome, Colin Reid
Broke's Rewards
Selected Bibliography
Index
This book is a very good read and with an all encompassing range of contributions that helps to put the action between the two ships into the historical context of the war as a whole and the legacy from it in terms of the art and literature that followed together with the advancement of the science of naval warfare it generated.
The book in hard cover has a recommended retail of £19.99 but new copies can be picked up for under £8.00 including P&P
Posted by carojon at 01:14