Ardennes'44 The Battle of the Bulge on Vassal - Part One 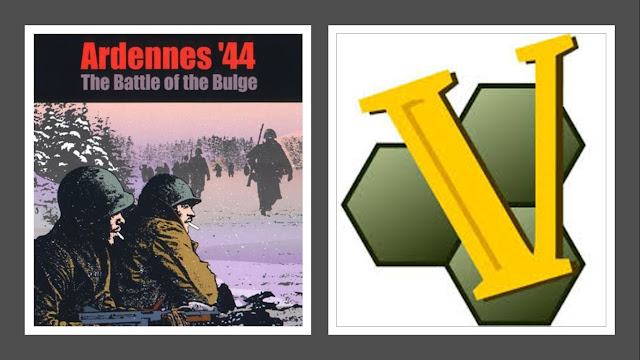 For the last five weeks on a Tuesday nights Steve M and I have been battling away in the Ardennes of 1944 refighting the last WWII German offensive in the west that came to be known as 'The Battle of the Bulge' as the German 7th Army and 5th and 6th Panzer Armies crashed over the Belgian frontline facing US troops on December 16th in what was thought to be a quiet sector of the front, where battered US divisions from other sectors could be safely sent to reorganise and accommodate fresh replacements from the rear.
Over the years my Battle of the Bulge itch has tended to be scratched by playing, first the 1981 Avalon Hill classic game of the name with copious reading of various General Magazine editions to work out the best possible attack set ups and the various percentage chances of success; swiftly replaced when I first discovered it and introduced it to Steve, 'Tigers in the Mist - Ardennes Offensive' also by GMT which we both love playing and would have probably done so this time around if there was a Vassal module to use.
So wanting to indulge ourselves with another bout of bridge blowing and Panzer hunting we looked for an alternative and decided to play a game I have had in my collection since it was first published but never had out on the table and given the size of it, perhaps is a little unsurprising.
The map shot below shows how massive a game this is with a hex scale of 1.6 miles, daily turns of eight hours (two day turns and one night turn and units representing, brigades, regiments and battalions, and for those willing to commit the time and effort the potential to play right through to December 30th, incorporating Operation Nordwind and the Allied counterattack in the wake of clearing skies and the return of the tactical and strategic air forces to hammer the Germans back to their start lines.
The size of the game illustrates well why Vassal is such a great platform to play on, having allowed us to play about a day's action of US and German turns each evening, leaving the saved copy of the game ready for our return a week later to pick up where we left off with map and counter graphics beautifully displayed making it so easy to immerse ourselves in it.

As with all Bulge games the situation presented to both players is what it was historically with a large number of German units looking to barrel along the few roads that run against the grain of the country, namely gaps in the mountains and hills and across rivers to eventually get out into more open country before crossing the River Meuse and on to Antwerp, leaving the shell shocked American defenders to do their best to slow the Germans at those choke points to allow their powerful reinforcements time to get into position to stabilise the offensive before pushing it back.

Thus we approached the game on that basis focussing our attention on working towards those objectives whilst learning the game play as we went, which is generally how we get to grips with all our first game plays, after a read through of the rules and a sharing of our learning, and in the end we decided to play the six turn scenario (ending December 18th) which focusses on the early German drive to secure key towns (ten) together with, if possible, exiting the first German spearhead units off the map.

My basic plan to start the offensive would have to be to get my infantry on both sides of the River Our that runs along the German start line parallel to the West Wall fortifications bringing overwhelming force where possible to the US forces holding that line, ideally near to key bridges which I hoped to capture to allow my armoured and mechanised units to start to break into the American rear areas.

On the right of the German line in the red area occupied by Dietrich's 6th Panzer army spearheaded by 1st and 12th SS Panzer Divisions, the river was not an issue but here the road network up to Malmedy is more limited in the number of approach routes and with stronger US units in position with others close by ready to reinforce via Eupen and Monschau.

As it turned out, a combination of massing large attacks of four and five to one using the copious amounts of German artillery on the first day of the offensive together with my die rolls being blessed by the Devil with numerous '1's' and '2's' (low rolls are good in Ardennes'44), Steve's defenders were rapidly pushed back or destroyed on the 7th Army/6th Panzer Army Front with victory point towns of Echternach and Clervaux taken on the first day and routes opened up to three others (Ettelbruck, Wiltz and St Vith), with the capture of ten such towns giving victory to the Germans in the six turn (16th  to the 18th December) scenario.

However the desperation built into the very planning of this offensive is well modelled as the German player discovers the limited capacity of dragging forward his artillery to support further attacks across the River Our and a limit placed on the number of artillery units able to reactivate on the succeeding days due to limited stocks of ammunition and the reduced ability to bring them forward; as well as the hold ups on poor roads in bad weather caused to German follow up units waiting to use the limited number of river crossings, and if that was not bad enough, the road blocks the US player can start to lay down ahead of German spearhead units, simulating the occasional Allied air attack or other similar hold ups.

Artillery and armour are key to German attacks in that they help shift a two or three to one attack with column shifts up to four and five to one and US units left in their wake are taken care of by the slower moving infantry and Volksgrenadier regiments who look to isolate them and attack the weaker units or cause the 'low morale/straight off the boat' units to surrender.

As my lead infantry units sought to consolidate river crossing points to facilitate the forward movement of the panzer units, I started to discover the need to push the Americans well back from them as Steve managed to blow a few bridges after I had crossed them but having failed to get his infantry further away from them, leaving them open to infiltration attacks - oh well, did I mention about learning the rules as we played!

The 6th Panzer Army front sets different problems to the German player with a very strongly held US defence line next to the Losheim Gap really limiting the approach routes, but with a successful attack by Kampfgruppe Peiper into Bullingen the race was on to get to Malmedy before the Americans could block the road effectively.

In Part Two, we'll see how well the German offensive continues on into the 17th December as Steve's American front line attempts to recover from the shock and early success of the German attacks.

Next up: The Trafalgar Build project is coming to a conclusion as the last twelve models await work in JJ's shipyard and I take a look at the collection to date and further ideas about putting together a 'big game', post-pandemic restrictions on social gathering.