All at Sea - Trafalgar Project Update, The Penultimate Group Added to the Collection

Last month I posted the first pictures of the Trafalgar collection of 1:700th model ships which is now into the final builds to complete the collection and this week I finished off the penultimate group of six models that have now been added to the respective line-ups. 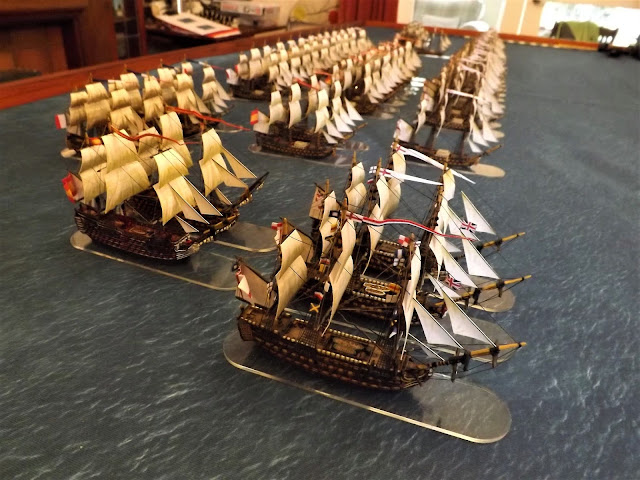 So first up I will start with the outstanding French and British third and fifth-rates that were the last ones needed to complete their respective groups. 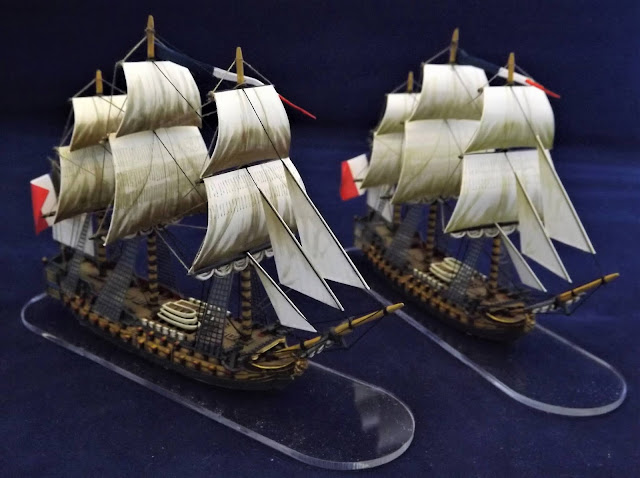 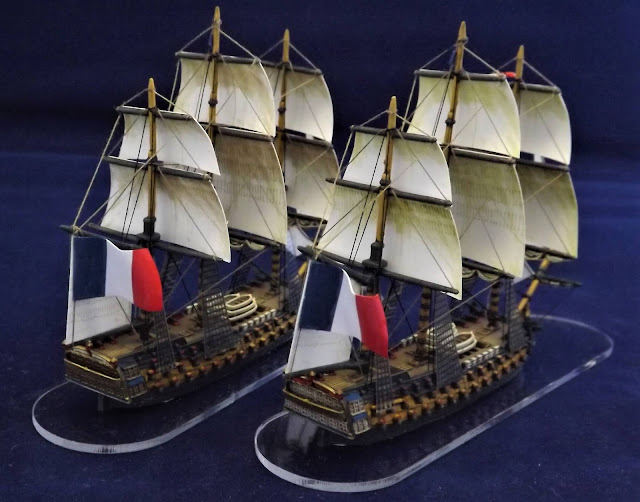 The Combined Fleet had a superiority of eleven third-rate 80's and 74's (28 against 17), which included no fewer than six of the excellent 80-gun ships against just one British.
It was in this part of the fleet line-ups that the British were at a distinct disadvantage with three of the much weaker 64's versus just one in the Spanish fleet compounding it. 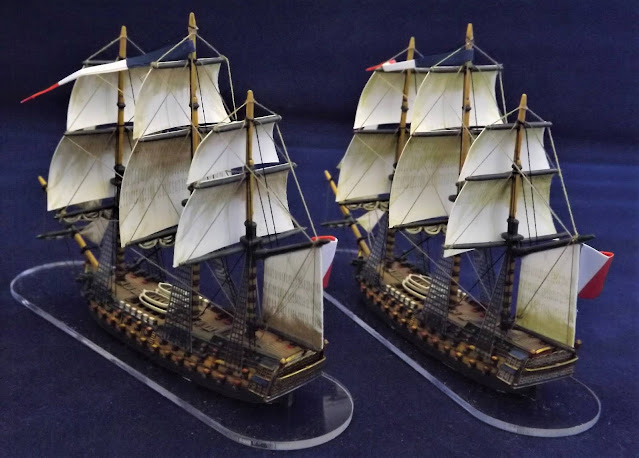 As with the previous six French 74's presented I decided to paint these in the Revolutionary war scheme rather than the more common chequerboard look seen later in the Napoleonic War.
All at Sea - Generic French 3rd Rates in Revolutionary War Trim 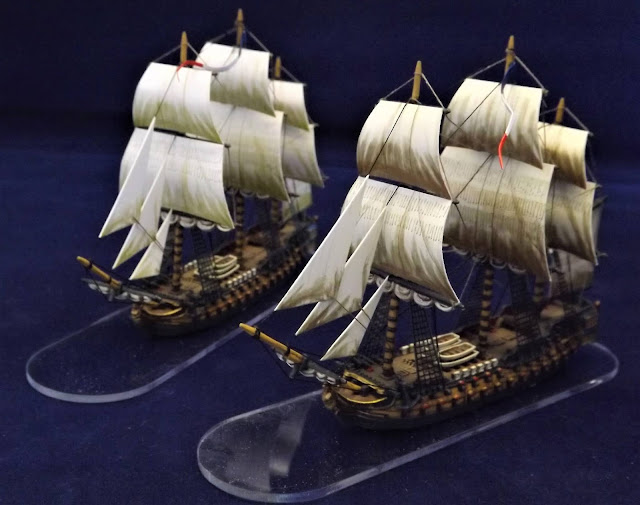 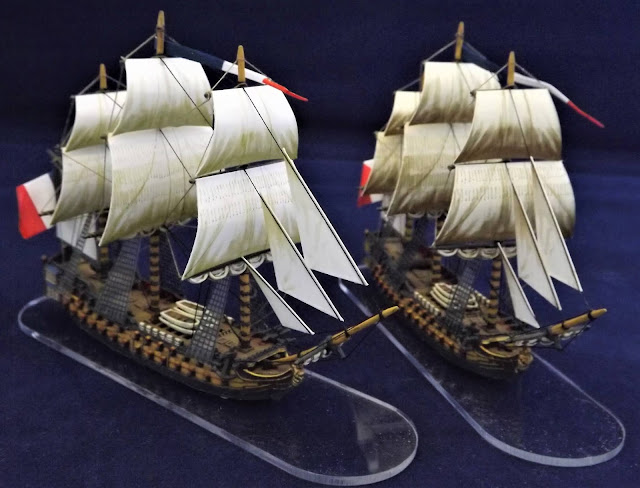 To complete my Trafalgar French collection I needed to add one more fifth-rate 40-gun frigate to complete the line up. 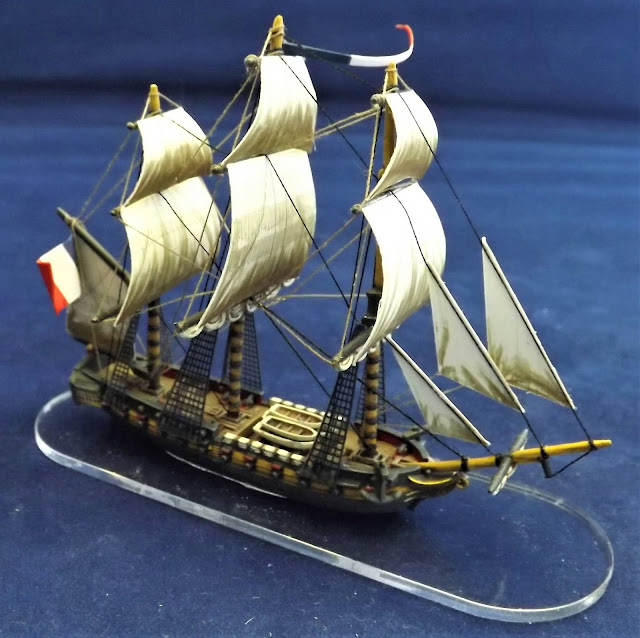 All the light ships of the Combined Fleet were French, with five 40-gun frigates and two brigs acting as scouts, signal relay vessels, command vessels if needed and in the end valuable tows for the bigger ships of the line, dismasted and badly damaged, that the Allies were able to get away from the victorious British fleet.
Cornelie - Capt. André-Jules-François de Martineng
Hermione - Capt. Jean-Michel Mahé
Hortense - Capt. Louis-Charles-Auguste Delamarre de Lamellerie
Rhin - Capt. Michel Chesneau
Themis - Capt. Nicolas-Joseph-Pierre Jugan 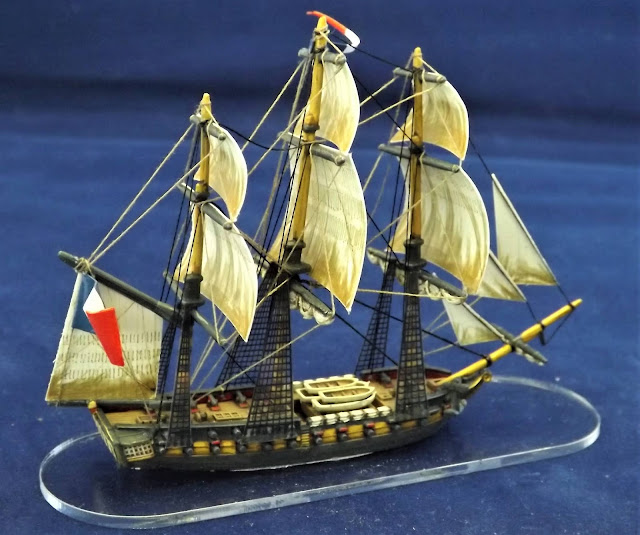 I think the role of the small ships in a battle such as Trafalgar is often underplayed by naval wargamers, often leaving these ships aside as unimportant to the decision of the battle between the big ships of the line, but I'm keen to see them not only on the table for completeness but fulfilling their important role during our games as described. 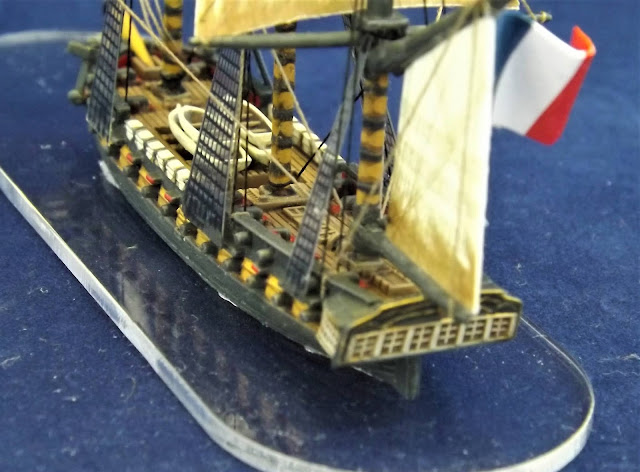 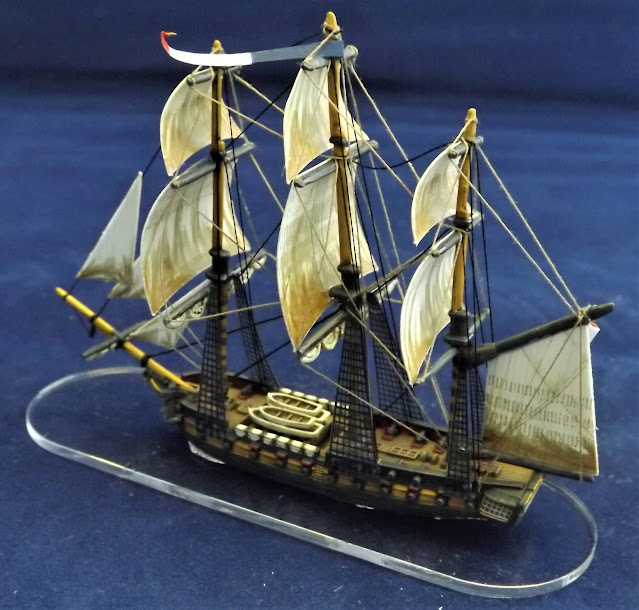 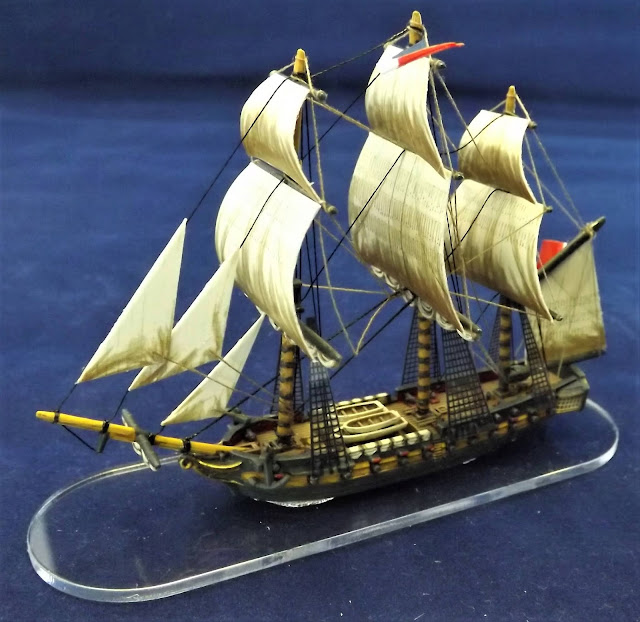 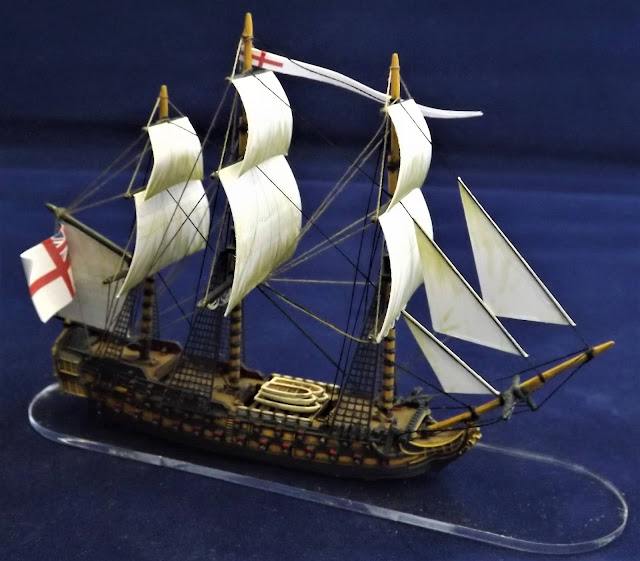 As mentioned, the British fleet was at a distinct disadvantage in third-rates versus the Combined Fleet, offset by the heavy batteries of the seven three deck first and second-rates, vessels I intend to look at in the next two posts as I complete the fleet line-ups.
That said the British third-rate component contributed about 25% of the total broadside weight of fire the British fleet could muster with 10,934 lbs out of 43,666 lbs (19.5 tons) total. This against 34,240 lbs (15 tons) for the French and 28,170 lbs (12.5 tons) for the Spanish. 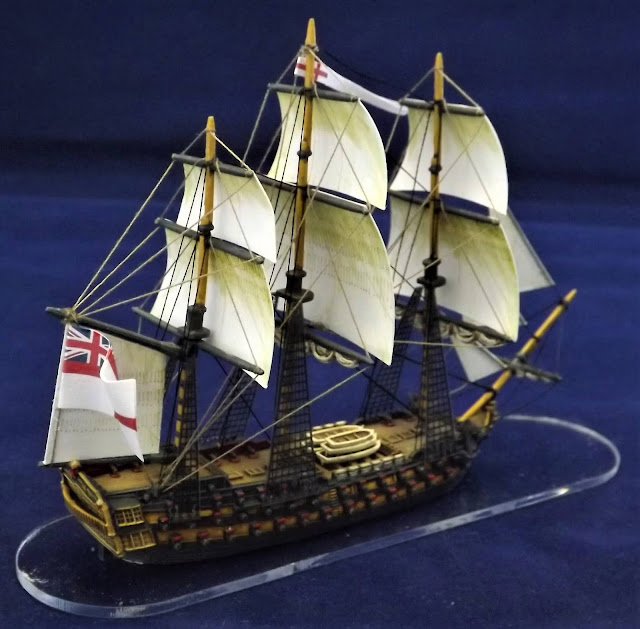 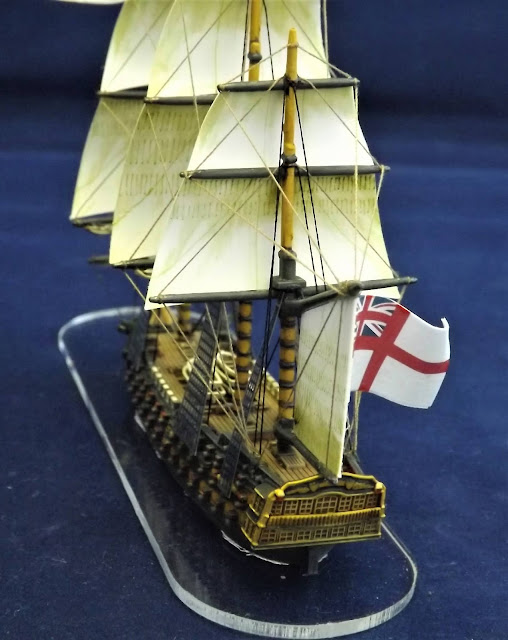 These total weights of fire power for the three national fleets at Trafalgar are staggering when you consider one of the largest land battles of the era, Waterloo, would see the combined capability of all the artillery present generate a tiny 1.5 tons in comparison. 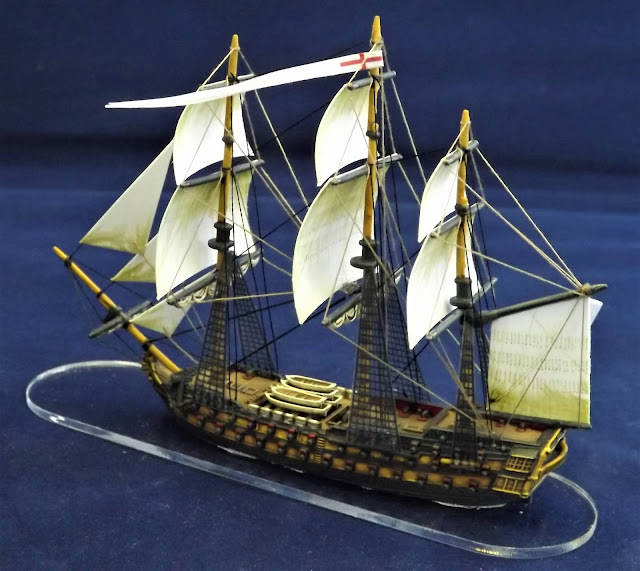 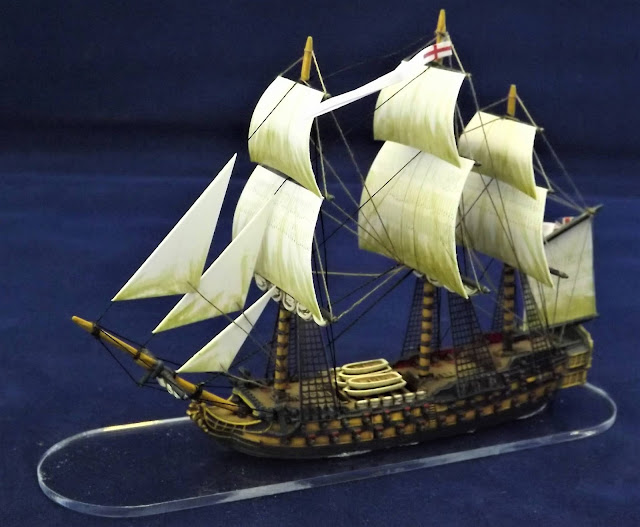 These models have been really fun to build and certainly repay the effort in trying to capture the look of the respective fleets and I will conclude this look at the last models needed to complete the collection with the six British and Spanish three-deckers to be added and the humble but just as important little British ships, the Bermudan schooner HMS Pickle and the Cutter, HMS Entreprenante. 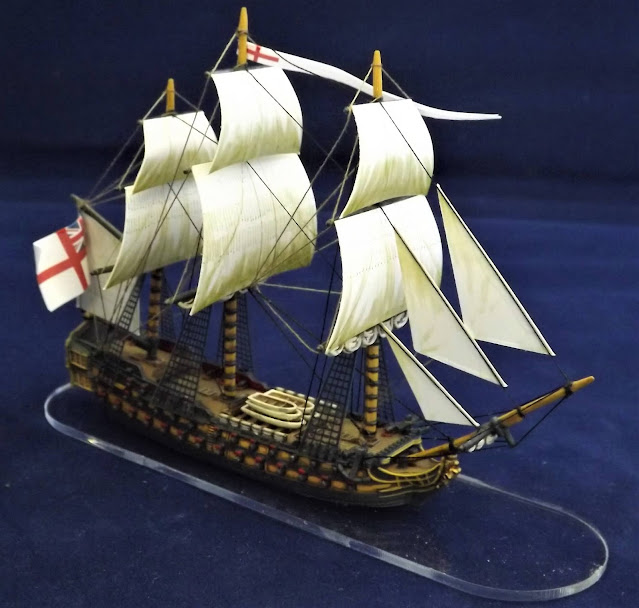 Next up: More ships as the final models to be added get their showcase before I look at the fleets in detail with the models built to represent them, plus Steve and I are into a new Vassal module, the Battle of Eylau, 1807 from Vae Victrix Magazine.
Posted by carojon at 23:25