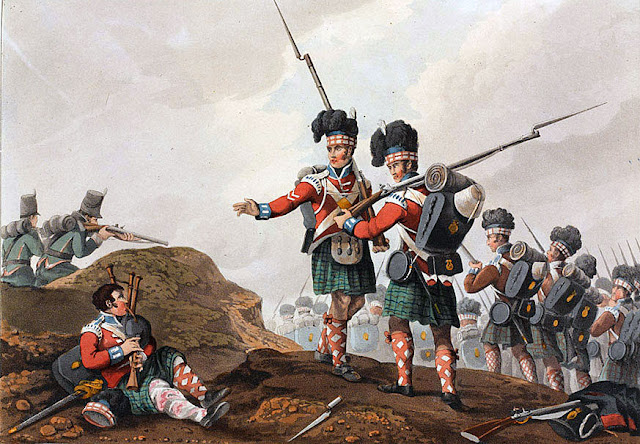 Mr Bill Slavin, host of the blog 'Tiny Wars Played Indoors', has continued with his adventures into the early years of British involvement in the Peninsular War with his playing of the third scenario from the O'er the Hills scenario book, picking up where he left off in the last game he played, by taking a look at the fighting that occurred out on the British left flank at the Battle of Vimeiro, 21st August 1808 around Ventosa Farm. 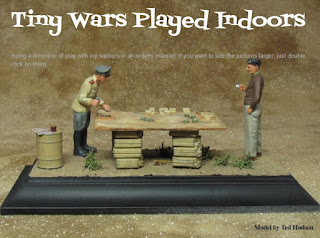 This scenario recreates the uncoordinated attack by General Junot's flank columns as the French commander sought to draw in British reserves with his frontal attack at Vimeiro Hill as his flank columns exploited in behind the British ridge line position and was first play-tested to be included in the O'er the Hills book by Steve M and me back in December 2017, where the uncertain arrival and set up of the French columns really emphasised the replay potential of this scenario with one game likely to be quite different from another depending on the slight element of chance that the French arrival could offer better opportunities than those that occurred historically and that the players could make good use of any advantage.
Over the Hills - Play-test, Ventosa
In addition, this part of the battle was written about by a participant in the fighting there, which I covered in my account of 'A Soldier in the 71st' and is also captured in the header to this post as the wounded piper of the 71st Highlanders piped his comrades into battle.
Prelude to Ventosa, A Soldier of the 71st

If you are catching up with this series of games played by Bill you can follow the links below to his previous two postings covering Vimeiro Hill and Rolica that preceded this game.

Tiny Wars - The Leopard's Debut, Battle of Rolica
Tiny Wars - Vimeiro Hill, Battle of Vimeiro 1808
As with his previous games, the scenario is brought to life with Bill's great tables together with the games being fought in glorious 28mm and the pictures that accompany his report are a delight.
As with the previous games, it is really interesting for me to see how these scenarios translate when played by others and the games they generate when compared with our own play-test games and in this case illustrating the potential for the French to have a better day than was the actual case, which keeps it interesting for both parties.
The Ventosa farmstead is a significant piece of terrain in this little action, allowing the French to anchor their position if not carefully dealt with by the British commander and if the French can withstand the likely British assault on their position allow their follow up column which includes French dragoons to severely embarrass any overcommitted British attack.
Having fought as the British commander in our run through of this scenario and having had the threat  of French cavalry getting in among my extended British lines as French columns bore down in their wake, I read Bill's account of his game with great interest and well remember the adrenalin rush of some of our critical die rolls when reading his account
If you would like to find out how Bill's game turned out and his thoughts about the scenario then just follow the link below for his post and more pictures like those featured here.
Tiny Wars - Flank Attack at Ventosa, Battle of Vimeiro
Enjoy
JJ
Posted by carojon at 22:52