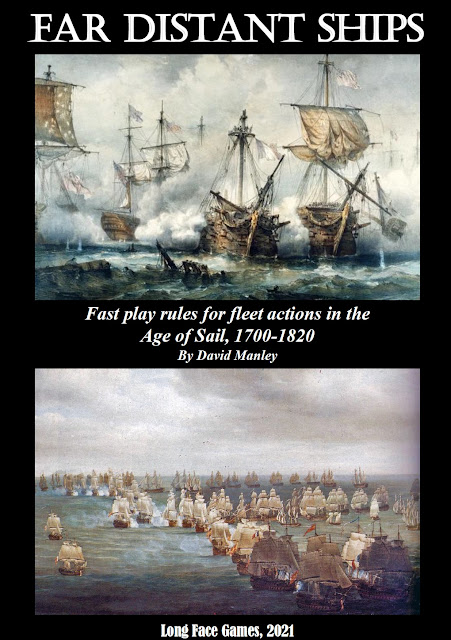 Those of us interested in Age of Sail naval wargaming have no doubt been aware of an impending new set of fleet action rules from David Manley who has authored a few sets in his time, most notably for this theme, 'Form Line of Battle which deals with the subject at a detailed squadron, individual ship level.
His new set of rules 'Far Distant Ships' shifts the focus upwards very much towards the Admiral/Commodore level with the rules directed towards the issues of higher command in a larger action and are described in the introduction thus;
'The aim of these rules has been to develop a quick play set for recreating fleet actions in the Age of Sail. with big battles resolved in 2-3 hours or less. Players take the role of fleet admirals such as Nelson, de Grasse and Gravina. As such the focus of the rules is on command and control rather than the minutiae of ship design, although the system does allow for a good degree of differentiation between ships within a particular ship type or rate. Command is exercised at Squadron level, with the players issuing orders to each squadron in their command, which must be obeyed unless new orders are transmitted by signal – not a perfect process and so the players must be aware of their own abilities, those of their subordinates as well as the environment when attempting to execute their battle plans, as a missed signal may cause confusion and disaster, or let a defeated enemy slip through one’s fingers.'
With my own current project now moving into working up suitable rules to produce my Trafalgar game a lot of the ideas David has included in this set around fleet management are very much part of my own considerations and from a first read through of the set I purchased from Wargames Vault this morning will likely influence those games. 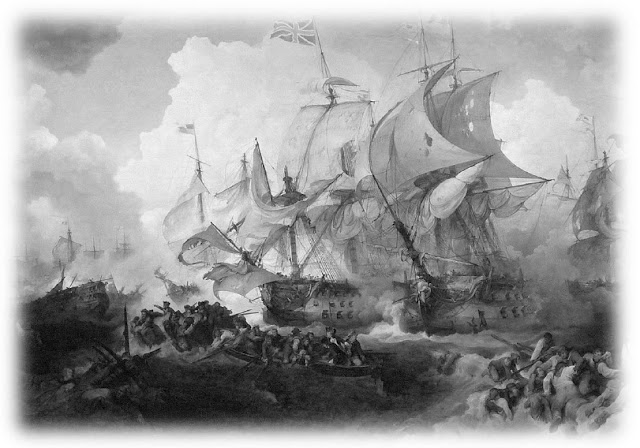 The rules are designed primarily around 1:2400 scale models but can be adapted for the large models simply by changing the game scale from centimetres to inches and incorporate systems to facilitate signalling, formations and command and control for really big battles involving large numbers of ships.
If these are the kind of games you are interested in playing then you might want to check these rules out available through Wargames Vault for just £7.50/$10.37