When the weather is right there is no finer place in the world to be than in Devon and one of our favourite places to walk is Dartmoor and in early June, when we were experiencing wall-to-wall sunshine and blue skies, and with Will home for a few days from Torbay Hospital in the last weeks of completing his medical studies, we headed off to Merrivale near Princetown in the middle of the moor; to follow a walk around King's Tor that takes in Neolithic monuments and the remains of the pre-iron age stone circle villages built by the first people who lived here, together with the remains of Dartmoor's Industrial heritage centred around stone quarrying, providing the materials that created London's most famous landmarks, in a landscape that would have been familiar to French and American prisoners of war of the Napoleonic War and War of 1812, detained in Dartmoor prison near Princetown, whose foreboding walls and buildings still dominate the town today.
The route we determined to follow is illustrated on my display captured from View Ranger and shows the direction of march from the roadside carpark under the red pin that first took us past the Merrivale stone row and village circles out towards the wooded vale that leads up on to higher ground crossing several leats that run off the moor from King's Tor and flow into the nearby River Walkham.
We cut the corner of the route as we circled past Hucken Tor seen above and up and behind the lower slopes of King's Tor before turning back towards the road following the path via the Swelltor and Foggintor Quarries, about five miles and combined with the incline and warm weather more than earned us a fish and chip supper on the way home. 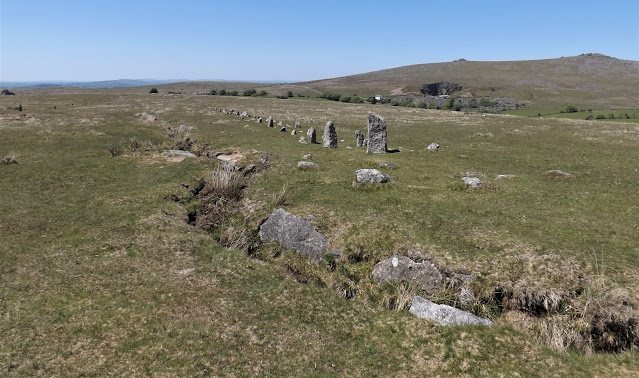 As we made our way past the Merrivale monument the ground descends and the terrain changes with trees and undergrowth, often indicating proximity to water, and we soon found ourselves among them and walled enclosures either side of our path with the fields beyond shimmering with a lilac haze of early June bluebells waving in the summer breeze. 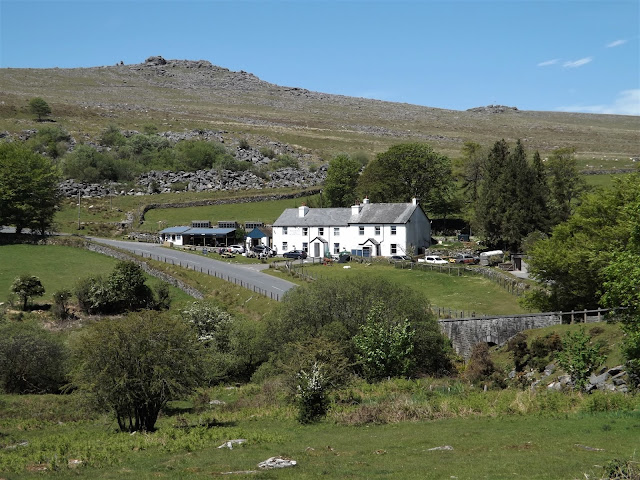 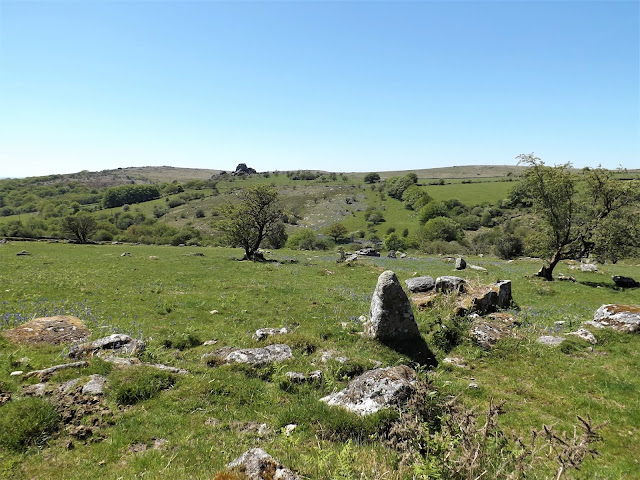 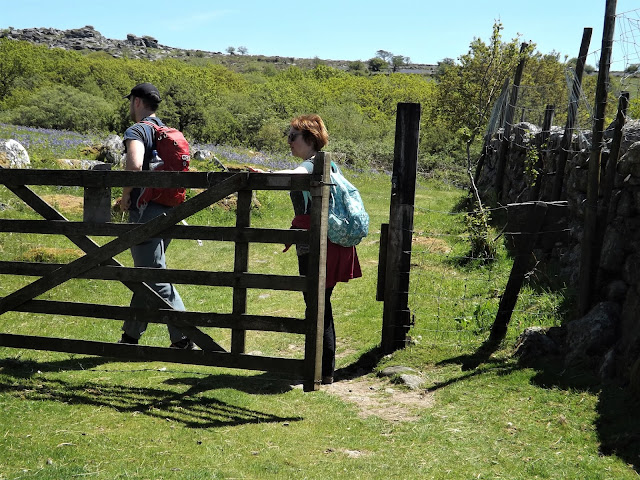 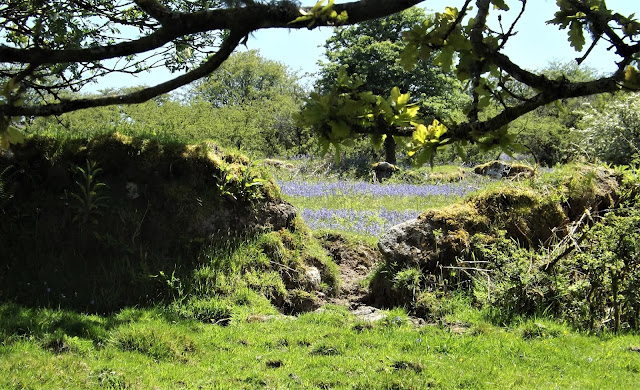 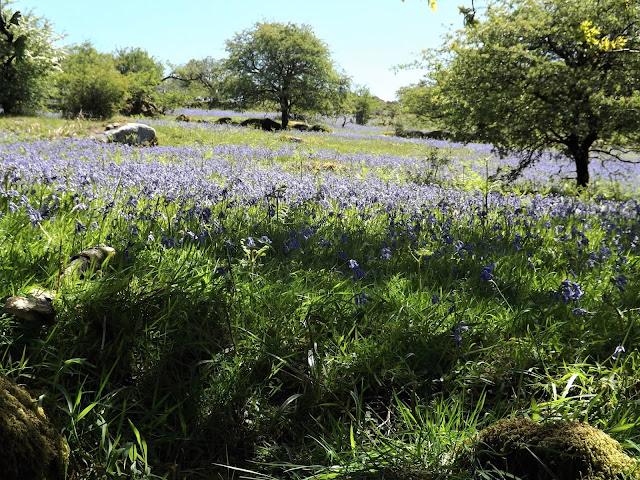 After the pleasant shade of the wooded river valley the ground climbed back out on to the moor above Hucken Tor and towards the lower slope of King's Tor where we inadvertently took a slight detour, which we pressed on with - you have to be pragmatic when out walking and often include the occasional change in route!

Moving around the back of King's Tor our path joined up with the much broader quarry track that indicated our route towards the old workings at Swelltor and Foggintor stone quarries, with heaps of stone blocks on the side of the path indicating our proximity to the remains of the old buildings. 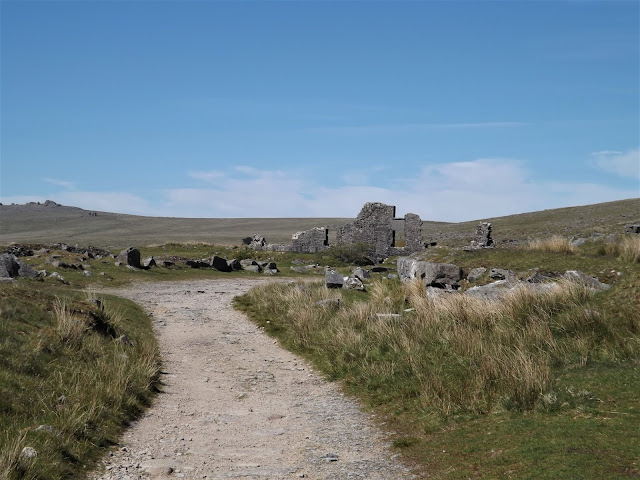 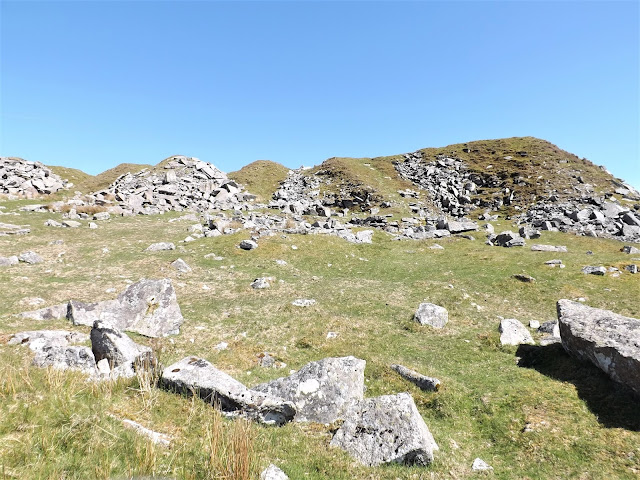 These old 19th century quarry buildings speak of an early pre industrial Britain on the brink of bringing a new age to the world and always make me think of a much harder way of life for those people labouring out here for instance on the moor, probably not really able to enjoy the surroundings in the quite the same way we were. 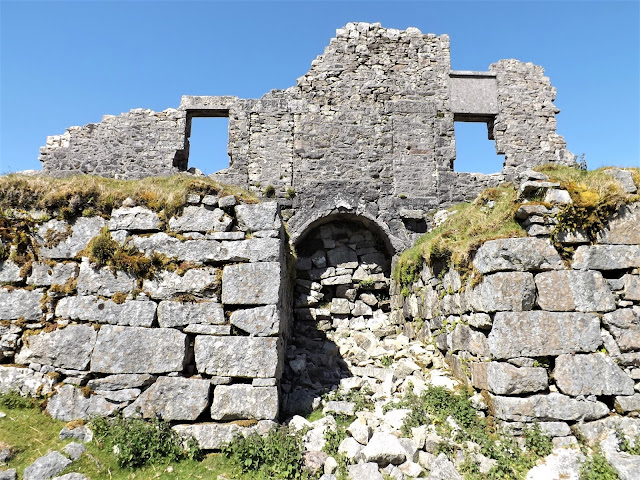 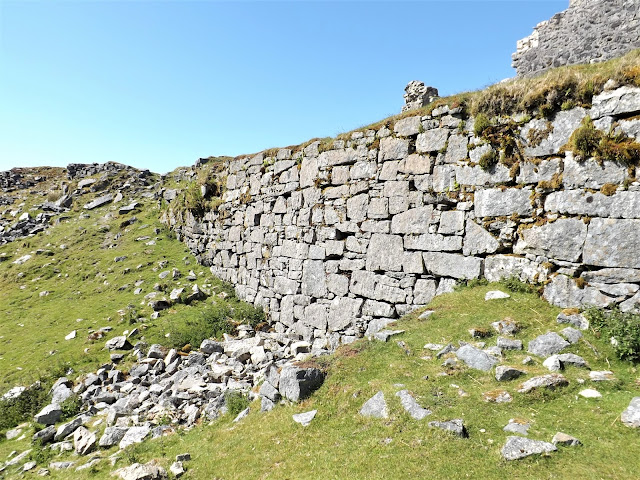 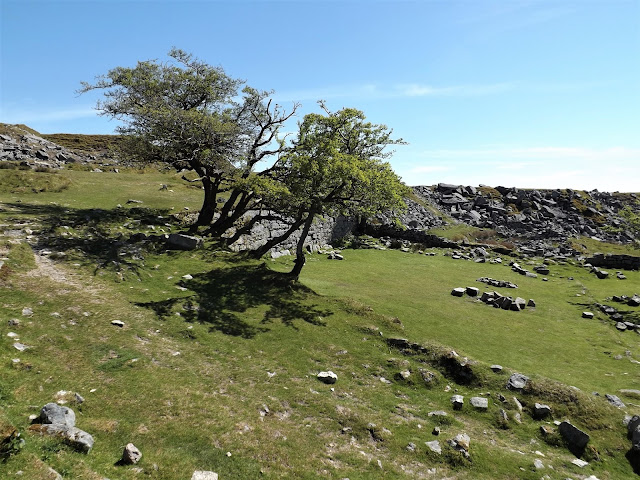 As our path headed back to the B3357 Princetown Road, the remans of the old stone railway and its sequential sleepers with ruts created for the carts that carried the stone away on them were still discernible, evoking comparison with similar Roman stone built roadways with less predetermined wheel ruts left for later generations to pause with thought over.

Soon we were back on the road with the car park in sight and with the late summer afternoon starting to turn a bit 'dimpsey', a Devon expression describing the decline in light of the onset of evening, our thoughts were of pulling off the boots and tucking in later to fish and chips. 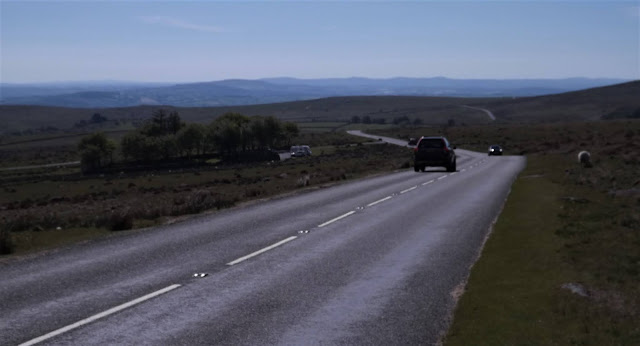 Another glorious day out on the moor and one for the memories.
JJ
Next up: Lots to come and it's back to wargaming, and I'm off to club this weekend to play Target for Tonight with an op to Hannover planned by Bomber Command in our penultimate game in the Battle of Berlin Campaign. Plus time away walking and enjoying getting out and about has taken me away from the shipyard but I have two sloops rigged and will show the first three that are done before working on the other three, and I have a post about a recent walk Mr Steve and I did looking at the Siege of Devizes and the Battle of Roundway Down
Posted by carojon at 02:41