Sovereign of the Seas (Compass Games) on Vassal and Boardgame, Table-top Application 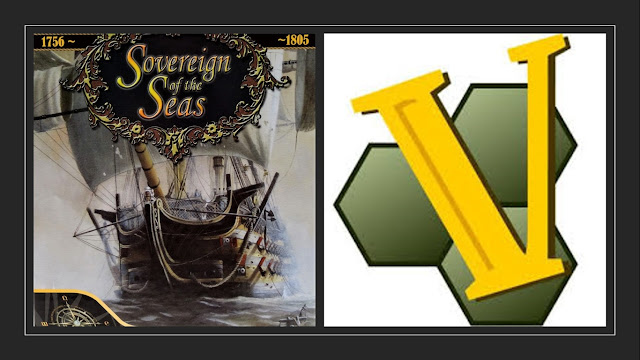 Any wargamer worth their salt, if they are into building collections of figures or models eventually turn their mind to campaigning with their collection, and occasionally, time permitting, some of those ideas see the light of day.

As this blog illustrates, I am a keen boardgamer as well as a table-top figure/model wargamer and see it as another aspect of the hobby that often also offers the potential to be used as a campaign engine to bring context to our table-top games, and whenever I play am always conscious of that potential in a game.

The main factors that can influence that potential for me is how easy is it to translate what happens on the table to and from the board and where is the time and focus likely to be, as many boardgames will carry a level of detail and minutiae that is not required or desirable when it is simply being used for context in the tabletop world.

However that balance is often a fine one, because if the boardgame is too simplistic it might not capture the feel of the period that you are representing on the table.

Needless to say with my mind very much focussed on the age of sail in recent months my eye has cast itself over the boardgame offerings in this subject and sadly it is a much under represented sector of the hobby, with little in the way of grand strategic naval games for the age of sail and with WWII naval predominating in games such as the old Avalon Hill game Victory in the Pacific and of course War at Sea.

I have looked at the offerings from Jay Waschak and Phil Fry such as Victory by any Means (VBAM) and his own GMT game 1805 Sea of Glory, which have bag loads of detail and period feel but seemed to me to be perhaps a little too complex in their mechanics on several aspects of this period, although 1805 is perhaps the better of the two but I think if used for a miniatures campaign would see more time spent on the game mechanisms and their admin rather than on the movement and command of the model ships. 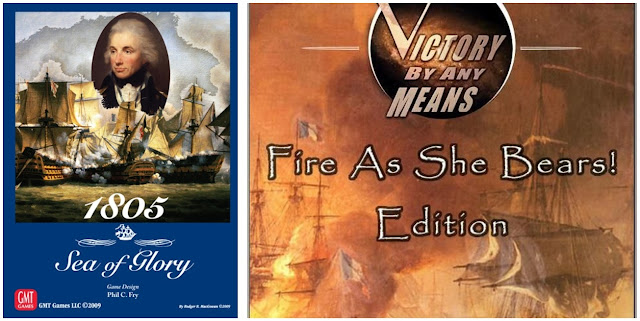 To quote the Too Fat Lardies, 'Making things simple does not imply simplistic' and the clever mechanics are the ones that incorporate all the detail and simulation that capture the essence of a period or historical theme in a very simple to use formula that keeps the game in that sweet spot of historical simulation but a fun game to play

Thus I have both VBAM and 1805 and, as well as being glad they are available, enjoy the attention to detail, but they are just not what I was looking for; but at least the naval gamer with a different opinion to me has some options here with these two offerings in what is a very sparse area indeed.

However I wanted to have the possibility of running large naval games within a 'wider war' context incorporating fleet management and the global nature of the First Great War that was the character of the Revolutionary and Napoleonic years, and Sovereign of the Seas (SOTS) from Compass Games seemed to offer that potential, bringing to it much of the design concepts of those earlier Avalon Hill WWII offerings but with very much an age of sail twist, and for those interested in earlier periods such as the Seven Years War and American War of Independence a chance to apply this game to those periods as well.

In addition, using Vassal, seemed to me to offer the opportunity of playing and coming back to the system around the table-top actions that the game might generate with a possibility of it modelling the small wall against commerce waged by the frigates and sloops together with the war of control and force projection waged by the great fleets, as well as overcoming some of the criticism of this game about counters being rather large for the map, amongst others.

Of course the only way to test the potential of the game was to play it and to see why some people love this game and why others less so, thus with my mind very open to possibility, I got together with Jason, another friend from the DWG, who is also very good at quickly dissecting games and how they play, and explaining to him my thinking, we started to play about eight weeks ago, starting in 1793 and working our way to 1805, the core years of the French Revolutionary and Napoleonic era.

With a quick die roll I took command of the Allies and Jason the British Royal Navy and we started the steep part of the learning curve with any unfamiliar game by working through the steps of game play which get repeated for each year of play, starting with randomly selecting the core of ships and commanding admirals from a national pool as seen above and then distributing them among the six squadrons for the British, French and Spanish/Dutch squadrons, with the option for the Russians to turn up as well.

Steps Five & Six are the last two admin parts of the game that sees decisions about where at sea squadrons will base themselves with the next year in mind and looking to be in the best possible place to operate from, combined with decisions to repair certain key ships damaged in battle or storms and those that will simply be added to the demobilised pile and returned to the in ordinary pool hopefully, or not, to return to the fleet in a later draw down.
We have both really enjoyed playing the game and have come up with ideas for home rule mods to retire commanding admirals in line with their historical careers as well as restrictions on some of the better British admirals such as Nelson and Troubridge, who weren't available as senior commanders until the latter half of this period and perhaps should be represented at half their total command ability when they first arrive as junior commodores in, for example 1797, for Nelson rating a +2 command ability instead of the +4 he gets as a full rear and vice-admiral from 1798 onwards.
These very able British commanders make a big difference to the British abilities to go to sea and to intercept.
Before starting this playtest I sat down and took a look at the representative counter mix of the respective fleets and was very impressed at the orders of battle that obviously does not have every ship available for the period, but does contain many very recognisable ones and in a proportion of rates that readily represents the forces available to the navies of that time
Our campaign is now on the eve of the Peace of Amiens and to represent the peace talks succeeding earlier or later we roll a dice from 1799 onwards to see if the next year will be the peace, but our roll determined the war will continue on into 1799.
This game is a much better game than some commentators would give it credit for, and despite some of the production faults in the map and counter size and the poor proof reading of the rules that has left some mistakes in the final product we have discovered what other commentators have noticed, that there is a very clever and entertaining game in SOTS and one that has much to offer the table-top community wanting to bring some context to their big and small games.
The Vassal option for playing the game overcomes many of its hard-copy issues and we are looking forward to picking up next week to resolve 1799 in the French Revolutionary War at Sea.
Sources relevant to this post:
Boardgamegeek - Sovereign of the Seas
Compass Games- Sovereign of the Seas
Next up on JJ's: Carrying on the nautical theme, the six sloops are now finished and have gone to the yard for rigging out, so I will be showing you how you can make these conversions look for the British, French, Spanish, Dutch and American navies or even to double up as merchant sheep in wolves clothing.

In addition I've been doing lots of walking and making the best of the summer sun in the last week or two with two walks on Dartmoor exploring its amazing scenery and historical 'ruins in the landscape', and Mr Steve and I have been out battlefield exploring, carrying on our journey back to the 17th century and to the dark days of the English Civil in the company of like friends Sir William Waller and Sir Ralph Hopton as we pick up where we left off at the Battle of Landsdowne Hill and follow the armies to Devizes and the Battle of Roundway Down.
More anon
JJ
Posted by carojon at 02:11