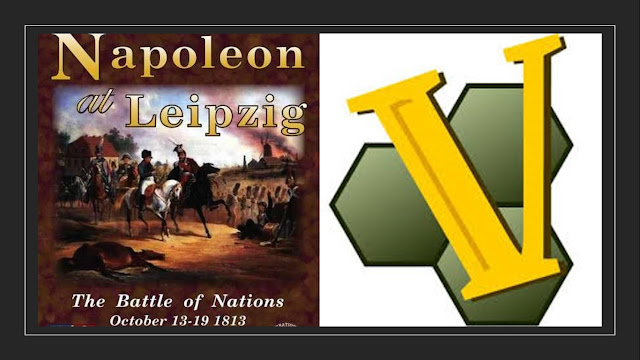 Back in the day when dinosaurs ruled the earth, I mean for you 'Millennials', pre internet and in a time when talking about digital meant using your fingers, Steve M and I sat down a few days before the Xmas holidays got into full swing, sometime in the late 1980's, to play my first edition copy of Napoleon at Leipzig from Operational Studies Group.
Of course the only computers around then was the Sinclair ZX Special or perhaps the Atari ST, which were not really up to handling a board game of this complexity, in fact they were not really up to much considering the computing power of an average modern day mobile phone, and so we were playing the traditional way using a hard copy paper and cardboard counter game, and we were happy because that's all there was!
As you can see from the pictures of that first edition game, which I still have as a treasured part of my collection, the artwork was pretty basic with the box cover featuring Marshal Ney leading the cavalry charge at Waterloo and with counters you could describe as functional rather than attractive.
Well it's all very different now, and sometimes I don't think the youngsters of today realise how very lucky they are, but us old codgers really appreciate the changes to wargaming and boardgaming and the 5th edition of Napoleon at Leipzig helps illustrate what I mean together with its Vassal reincarnation that makes playing a mammoth game like this very doable and great fun.
Yes we could set this thing up in hard copy, leaving it in situ and playing as the opportunity presented, but frankly I am now of an age where messing about with hundreds of small counters and a pair of tweezers is not really very appealing; not when we can get together over a table with laptops, back to back, and enjoy the graphics power of Vassal without any chance of a stack of counters getting knocked over in the mayhem of battle, and we can save the game at any time, to pick it up exactly where we left off.
When I describe this game as mammoth, I'm not kidding and the sight of the hardcopy map laid out shows the need for an aircraft hanger to accommodate it, but the new version of the game is truly a stunning piece of artwork with counters to match and so Steve and I were keen to rekindle the memories of our previous game over which we played into the wee hours of the several days it took us to get it done.
This time however we were using the latest Vassal module together with all the new rules including things like vedettes and strategy cards to modify the play and we decided to go large and start the game right at the beginning on the 14th of October as the armies started to arrive on the field of battle before the walls of the great city of Leipzig.
With lockdown restrictions gone, Steve and I are now able to play face-to-face once again, but I think this is where the versatility of Vassal really shines through not only as a remote play platform but also as one where the size of the game map wise and with a multiplicity of counters in play makes the aspect of setting up, saving and coming back to, so easy and a reason to keep playing Vassal while we are both so competent at using it, something likely to lessen as we play more games in hardcopy format.

Both of us are well read on our Napoleonic history and so were both aware of how the battle was set to unfold, but I chose not to refresh my memory on exactly how the actual battle unfolded so I could play it somewhat as Napoleon found himself, having to react to an unfolding situation.
That said the game has moved on from the original version we both played back in the late eighties with the inclusion of cards that can slightly alter the historical account with variations to the reinforcement schedule and slowed rates of movement to interfere with precise placement of specific corps

The game starts with Marmont's corps in the north together with the French Leipzig garrison in situ, and with the bulk of the two armies already on the battlefield facing off to the south of the city with the French under the command of Murat and the Allies, under Schwarzenberg.
The game is scaled around one hour moves at brigade level, with each hex equating to 525 yards of ground and with slope hex-sides representing a rise in height of 50 -100+ feet, with die rolls using a traditional d6.

Thus with brigades forming divisions and divisions forming corps, the key pieces are the various corps and army commanders, as seen in the illustration above, with, in this example, Napoleon obviously an army commander and a very good one, having three command points allowing him to command three subordinate corps commanders out to a range of four hexes without them needing to activate themselves, and with an example of a subordinate such as Oudinot here, able to command his corps units out to a range of three hexes, but if out of command activating himself on a 4 or less as defined by his Initiative Rating.

Likewise the various brigades have their corps affiliation clearly identified with the above example of Marulaz's Light Cavalry brigade of  French IV Corps able to break down into four vedette counters and having an Initiative Rating of 3 able to activate itself on 3 or less on a d6 should for some reason it finds itself outside of command from its IV Corps commander.
Obviously at this scale artillery ranges are out to a maximum of three (extreme) hex range and close combat occurs hex side to hex side, with line of sight able to run along hex spines to target an enemy close to, but not in, blocking terrain.

The 14th of October is characterised by both armies arriving and the respective lines around the city of Leipzig starting to coalesce as the race is on to 'get there fastest with the mostest' to quote a certain US general of a much later period.
This race generated some town fighting in Liebertwolkwitz as the Austrian IV Corps tried to stage an early coup by ousting the French V Corps as the French just managed to enter the town first, and seeing them winning the struggle before barricading themselves in and around the church on the eastern outskirts.
The struggle for the town saw us both trying out the rules and relearning the principles of artillery barrages and mixed arms combat with Pajol's heavy cavalry managing to catch an Austrian brigade with a charge in support of a combat that broke the Austrian formation up, sending it to the reform box.
As the first day of our game came to a close we are remembering the grinding battle of attrition this game creates presenting both players with the challenge of managing the combat in localised areas while trying to keep an eye on the bigger picture of the evolving lines around the city in what was the biggest horse & musket battle before the modern age and the titanic struggles on the Western Front in the First World War and thus demonstrating perfectly the command and control limitations of this age stretched to their limits in this battle.
As our game evolves I will follow this post up with the AAR's for the others days as we refight OSG's Battle of Leipzig on Vassal.
Posted by carojon at 00:46