With the completion of the British order of battle at Talavera it is time to press on and get the French finished off and so attention turns to the next French line regiment in General de Division Lapisse's 2ieme Division in Marshal Victor's I Corps d'Armee.

The 45e Regiment de Ligne can trace its lineage back to 25th June 1643 and the Regiment de la Reine-Mere (The Queen Mother's Regiment). Raised as one of the first new units during the reign of Louis XIV under the direction of the Regent of France, Anne of Austria who commissioned Nicolas de L'Hopital the Duke of Vitry and Marshal of France to raise the regiment.

The regiment was immediately thrust into the French contribution to the Thirty Years war in their war with Spain, (Franco-Spanish War 1635-59) taking part in several sieges that characterised the nature of the fighting and saw the regiment particularly distinguish itself in the Siege of Gravelines in 1644.

With the death of Queen Ann in 1666 The regiment changed its title to the Artois Regiment  and was then involved in the War of Devolution 1667-68 as Louis XIV made his bid to secure the Spanish Netherlands for France. The regiment was part of the Prince de Conde's campaign in the Spanish held Franche Compte. 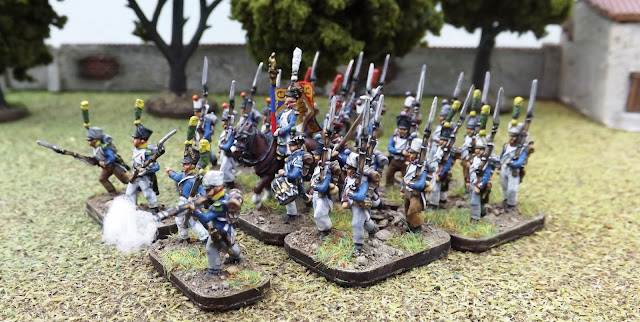 The regiment was now part of the Marshal Vicomte de Turenne's 50,000 man force mobilised at Charleroi in May 1672 which would see them go on to play a lead role in the successful siege of Maastricht where on the 18th June 1673 under the eyes of the King they would twice assault and capture a key defensive work, the second time after it had been lost to troops they had handed over to. After this costly fight they were selected to act as the King's personal bodyguard during the siege and were later awarded the title "Royal" in recognition, taking the name Crown or Regiment de la Couronne and presented with new flags which carried crown motifs at their centre with the Latin inscription “Dedit hanc Mastrika coronam - Maastricht gave this crown”. 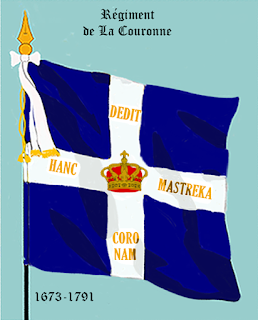 With the conclusion of the Franco Dutch War the Regiment de la Couronne would see service in thirty-eight years out of seventy-five in the War of the League of Augsburg 1688-97, The War of Spanish Succession 1701-13, War against Spain 1719, War of Polish Succession 1733-35, War of Austrian Succession 1741-48, The Seven Years War 1756-63. During those campaigns it would live up to its regimental honour with notable contributions in Spain at the Battle of Almanza in 1707 where the regiment, at terrible cost, held the centre against British attacks long enough to allow Marshal Berwick to sweep away the Portuguese cavalry and rout the allied army utterly destroying it (Allied losses were 17,000 out of a total force of 22,000).

Likewise they were part of the French line at Fontenoy that met the British Guards and like the French Guard suffered horribly to the advancing British platoon fire that  broke the Garde Francaises and drove back the Guardes Suisse and left the Regiment with 449 officers and men dead or wounded. Unlike the Garde the Couronne who were in the front line stood their ground and crossed bayonets with the British troops. 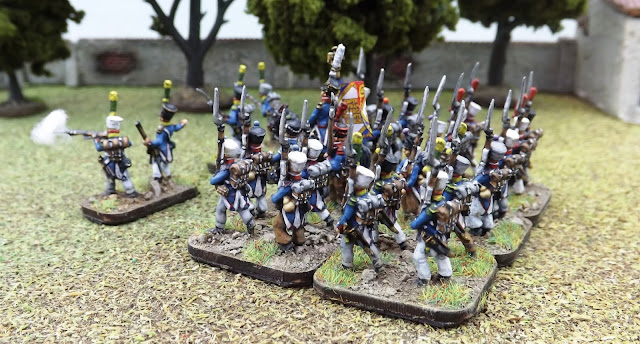 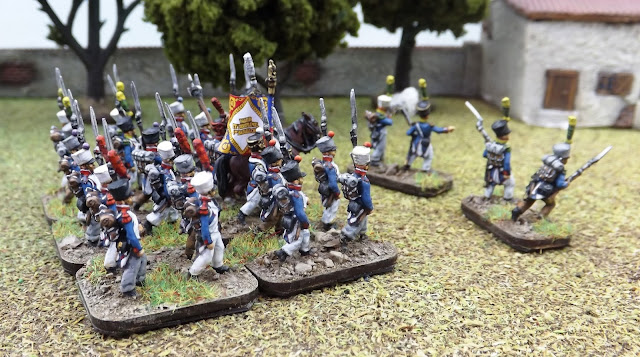 In 1803 and the rise of Napoleon the regiment was retitled the 45e Regiment d'Infanterie de Ligne under the command of Colonel Jean Leonard Barrie who would lead the regiment up to and including the Battle of Talavera where he was wounded and who would later take command of the garrison of Cuidad Rodrigo during the siege and storming by Wellington's army in  1812. 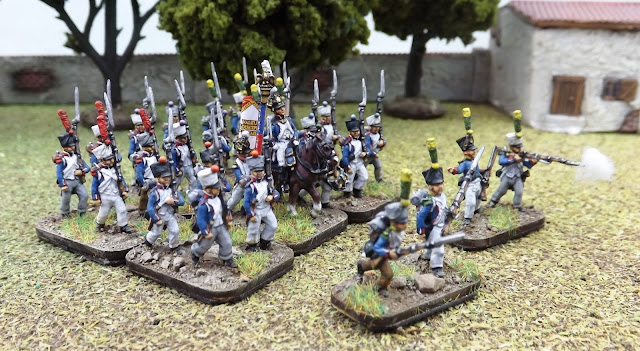 My uniform references specifically of the 45e Ligne are few and far between apart from these two offerings, one from the Otto Manuscript showing the look of a regimental grenadier and the other of the drum major in Hamburg in 1807. The other is from Rousselot obviously using the first reference to base his drawing on. 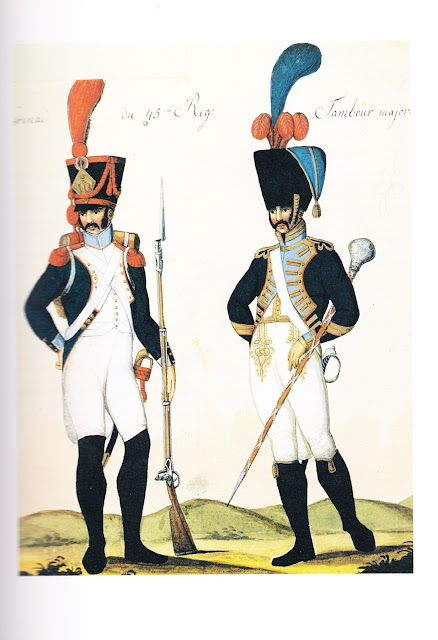 I am not sure we can place much assurance that the regiment would still have been sporting its curious light blue collar and cuffs in 1809, as seen on the grenadier, as at the time of the Otto depiction the French army was coming out of its white uniform experiment and the light blue was the facing colour allotted to the regiment although they were never issued the white uniforms. I therefore have opted for the more traditional red.

However without any other sources on the musicians in the regiment I have taken the light blue and used that colour for the facings on my drummer. The light blue is seen here worn by the Drum Major and also replicated in the Otto illustrations on the facings of the regimental sapper. One other regimental curiosity is the red banding on the grenadier's shako which given my first battalion is using shako covers I cannot adopt, but will be a feature of the second and third battalions and I will replicate a similar yellow banding for the voltigeurs. 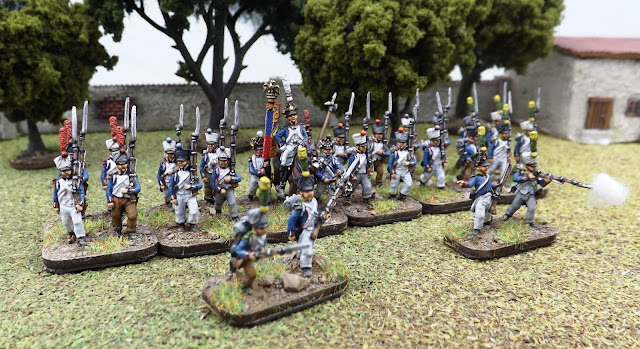 My 1/45e Ligne is composed of AB figures and carries a colour all supplied by Fighting 15s.