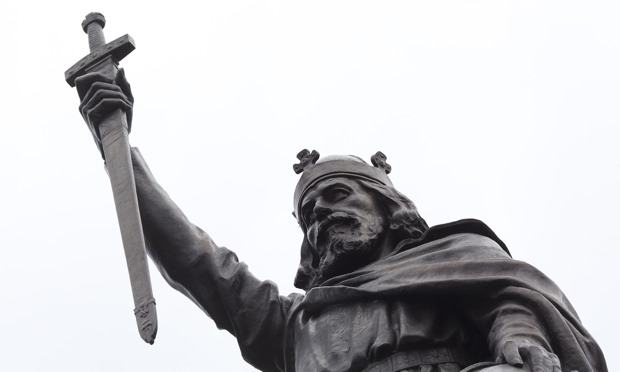 The weather is starting to warm up and spring is in the air and twenty more Saxon warriors heed the call of their King and arrive at Basengas to reinforce the garrison. With just two Viking and one Saxon turns left, I decline the invitation to forego the protection of the +3 defence of Basengas, knowing full well that any sally forth by my men would most likely be met by a retreat by the Vikings and then have them descend on me with their full force in the open as I am in my turn forced to beat a retreat back into Basengas in the next turn leaving me weakened and chastened by the experience and the possibility of being unable to resist an assault.

Much better then to reinforce our forward defence in the area that the Vikings have committed towards and to threaten their expansion westward into Wiltunscir with Alfred's force, thus having the Pagans dance to my tune rather than theirs. 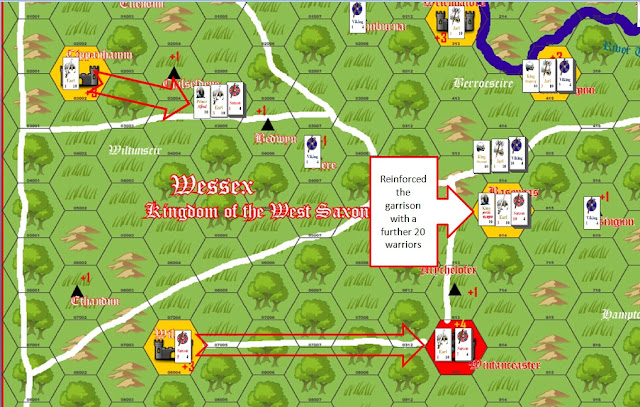 Well I can't do much to stop the Vikings grabbing a minor points victory as they have the initiative of the final turn, so any of my troops put out into the wider countryside as village garrisons invite being picked off in detail, and will weaken any defence of Cippenhamm but Aethelred can at least take satisfaction that the strength of the Saxon forces can still dictate a Viking response and is a force in being that would only get stronger over time perhaps allowing a counter offensive later in the year.

So I predict the Viking force near Malmesbury will fan out to the string of four villages and grab those close to the Thames, whilst those at Readingum and Lundene will grab the two villages in the south east and Sashes knowing no further Saxon attacks are possible. So potentially a 23 points - 17 points Viking win.

Making the move with Alfred and reinforcing Aethelred at Basengas was the move the Vikings least wanted to see and has forced them to shift their offensive on Wintanceaster away to Wiltunscir. 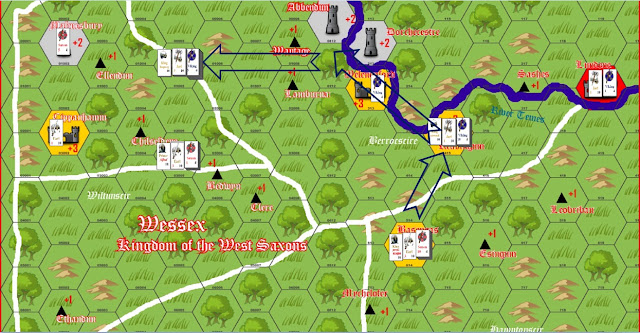 It will be interesting to see what the view looks like from the other-side of the shield wall. More thoughts from Ragnar to come as we go into the final move of our game. 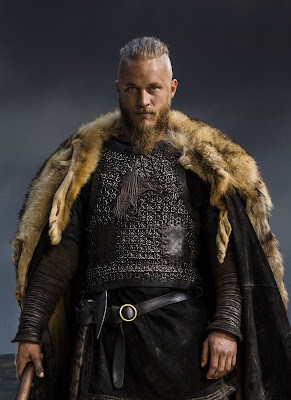 Good news the Saxons are still in slumber mode which means I can carry out my plan, first let me go over the previous move.

I have always played with the knowledge that I will get the final move, so to allow me the maximum opportunity’s I need to prevent what the Saxons can do in their final move. I placed my army where I did so as to try and prevent the Saxons from moving their main army, I am quite happy with where they are in Basing as it mean’s that they cannot have much influence over the rest of the map. If they attacked then we would have worn each other down to nothing but would still leave me with a sizable force in . Also if he moved out to attack me then he would have had to have left a garrison of sufficient strength or risk leaving it empty but without knowing what the result of the battle would be.

What can go wrong, well I see the following possibilities:
1.      Alfred attacks with his smaller force but beefed up by all the other earls and Kings and attacks Bagsecg. This could go either way and is what I would do.
2.      He detaches his faster moving Earls and attacks my occupied cities in the hope that all my counter attacks fail, probably not going to work as I can really mass figures from .
3.      He garrisons all the cities around Malmesbury calculating that I cannot be strong enough to take them all. Likely.
4.      Desperate attack on Reading with his main army, well they don’t have any other function so that is also likely  and/or heavy garrisons in Clere and Esingum.
Remember the points total is very close so one well defended town could swing it.
5.      Earl attack on , throw every earl he has at but again I can retake it with the army.
6.      Earl attack on , whilst suicidal it would prevent river movement. I must reinforce somehow.

I pull back most of the outlying garrisons, I had a long think about this prior to doing it and I am still 60/40 about it being right. He will have to put his own garrisons into them to prevent me scoring so that means I will then have to allocate sufficient men to take them back and I don’t think I can get some of the old ones back but I am hoping that the Malmesbury area will compensate.

I cannot weaken the Reading army much as I expect to get attacked , I send what I can into Wallingford and King Bagsecg doesn’t really end up with the force I would like but I add in whatever Kings and Jarls I can scrape together.

Just at the end I decide to move my Malmesbury force to a different hex that will also threaten Chippenham however it also allows the Saxons to add in another five warriors if he strips out everyone.

A battle would be between 28 Warriors, 2 kings and 11 earls maximum. Against my 3 Kings 8 Jarls and 34 warriors. I would expect him to place some of the earls into the towns as it would prevent a shattered Viking force picking up easy points.
If everyone hits then there wont be many survivors.
Last decision is to also strip out the river garrisons to help Bagsecg making it now 9 Jarls and 36 Warriors, as I said previously the garrison can always recapture them with over whelming force if necessary.


I hope that the lure of empty cities might tempt away some of his earls.
Posted by carojon at 00:17