Kill Them All, Cathars and Carnage in the Albigensian Crusade by Sean McGlynn 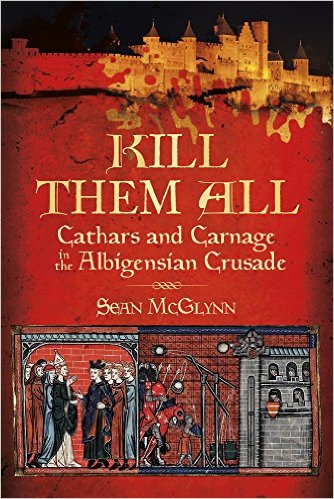 Let’s get the title out of the way first, it is said that after taking their first large city, Beziers, the Papal Legate who was accompanying the crusaders was asked how would they decide who of the cities population was a heretic and who was a good Catholic. He is alleged to have replied:

“Kill them all! God will know his own!” and so they did, every one.

There are slight variations on this but whether true or not the Albigensian Crusade was infamous for the number of wholesale massacres that took place on both sides.

This book is described as a military account of the crusade (1209-1229) and it does a good job in that respect, the story however is quite different from what I expected to read mainly through incomplete knowledge on my part and it has greatly changed my opinion on this crusade.

Sean McGlynn’s point is that while the Orthodox Church needed the Cathar heresy to be suppressed, it quickly became a matter of conquest rather than conversion. This part of France was virtually, if not totally, independent from the rule of the French king, indeed great parts owed allegiance instead to Aragon and some even to the German Emperor. Most of the area was under the control of the Duke of Toulouse and the book revolves around his efforts in trying to fight off first of all Simon de Montfort and then the French King. Of course whenever the crusaders did take a town then any Cathar’s who were inside very quickly became nice and crispy but it becomes clear that militarily the Crusaders weren't taking out the main Cathar strongholds but instead were systematically going after the key cities and castles of the area.

The book can be split into four parts, first up is the anti-Cathar crusade that gets it all started.

(1209)
The Pope finally despairs of the Southern nobles complete lack of effort in stamping out the growing heresy and proclaims a Crusade, as this is not the distant Holy land and is therefore a lot safer and cooler, there’s no shortage of volunteers to do a quick forty days work and therefore get all their sins absolved, they came mainly from northern France but also from Germany and even some from England. The Southern nobles mainly sit back, quickly surrender or offer half hearted support to the crusaders especially after what happens at Bezier. Carcassonne is captured reasonably easily and everyone goes home to start working on some new sins. 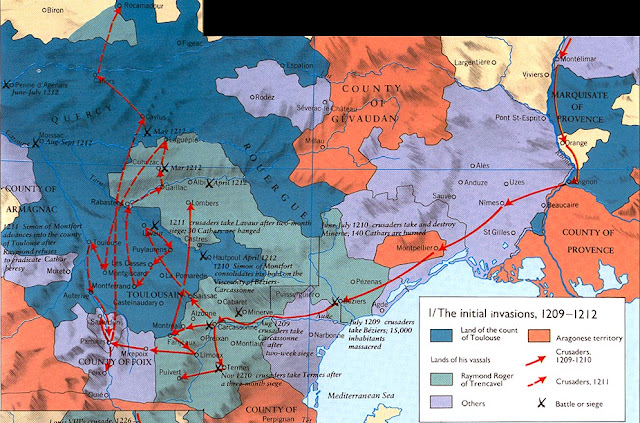 (1210-1219)
The next part is the most interesting, after the main nobles go back home, Simon de Montfort takes charge and attempts to carve out his own little kingdom (not really a kingdom but you know what I mean; once in charge he would have then decided who to swear fealty to as long as they then left him alone). This is obviously now a blatant land grab and the Southern Leaders start to fight back, he is helped however by there still being a Crusade in place and so he does receive regular reinforcements each spring which allows him to go on the offensive, unfortunately they tend to drift off again after forty days so it’s a constant balancing act for him. This part ends when at the second siege of Toulouse, de Montfort says “see that heavy rock coming our way lads, bet you I can head it. “and there isn't a saving throw in the world that will help him.

This takes up the majority of the book and is very interesting.

(1220-1226)
With De Montfort dead his son takes over (no, not that one) and he struggles to hold back the Southern Nobles as they go back onto the offensive, still short of troops it’s a tough job and with various Popes now concentrating on the Fifth Crusade in Egypt he wasn't getting that many sinners helping him out.

(1226-1229)
Part three is where the French really pile in, lead by King Louis (the one that invaded England when the Nobles rebelled against John, Dover castle etc). He leads a massive Royal army, besieges Avignon but he also doesn't quite finish off the Southerners as he to becomes another casualty of this Crusade by dying on the way back home from dysentery. In fact it’s a pretty disastrous twenty years for anyone taking part as the death rate amongst the nobility is tremendously high compared to normal. We lose two kings, the second one being Peter of Aragon who is killed in the Battle of Murat against De Montfort and if you were a knight then it was 50/50 on whether you got ransomed or massacred when captured. (not such good odds for everyone else)

The French leader who remained in the area changes tactics to waging an economic war, what became known as chevauchée, and eventually the last Duke of Toulouse after giving it one final effort and now with no money or food, gives in and the area becomes part of France. 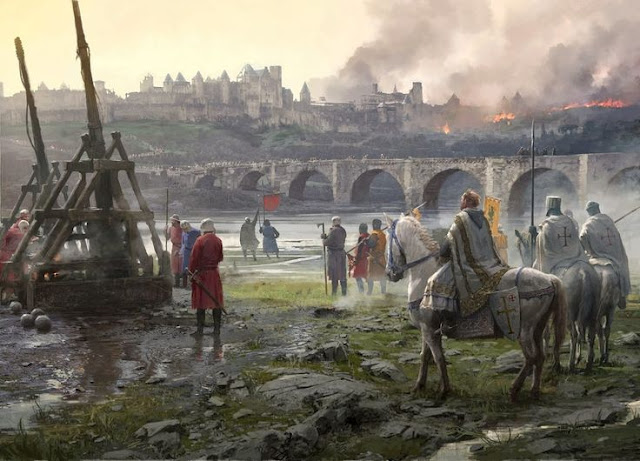 It’s a good read, the campaigns swing back and forth and there are even some decent sized battles and numerous sieges. De Montfort isn't the only one who gets on the wrong end of the defenders rock throwers, something quite rare I would have thought, crossbows or arrows certainly but I cannot think of many leaders who get killed by large lumps of stone, I mean, was he just distracted or were his followers just too frightened to interrupt him so that they could tell him to move five paces to the left.

The numerous sieges of Toulouse are also very interesting especially as they fight all of them off and also the fighting ability of the Northern knights allowed them to win despite the odds facing them on countless occasions, this difference between the North and the South of France is something I need to spend a bit more study on as it surprised me.

If you want more Heretic burning then this isn't for you but as a twenty year campaign that continually swings back and forwards then it’s a very good read. Its also quite gruesome as they really didn't like each other.

This has been a Mr Steve presentation.
Posted by carojon at 07:04