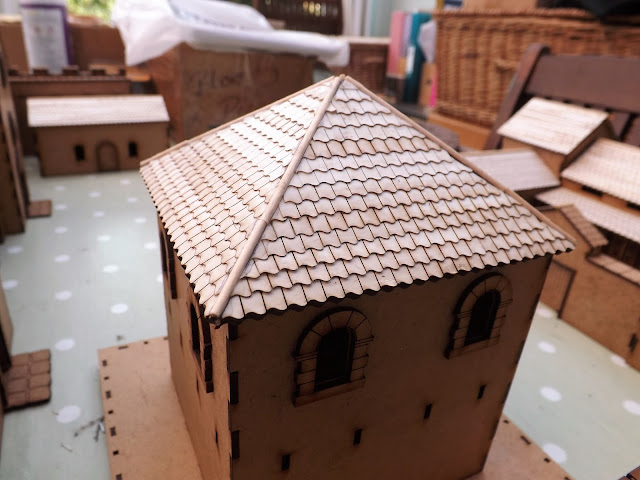 This time of year, namely early spring, is ideal for me to get stuck into a bit of terrain building which I like to do in our sun lounge.

The light in the room is perfect for constructing and painting and the weather is comfortable thus avoiding it being too hot to sit for several hours at a time messing about with terrain. 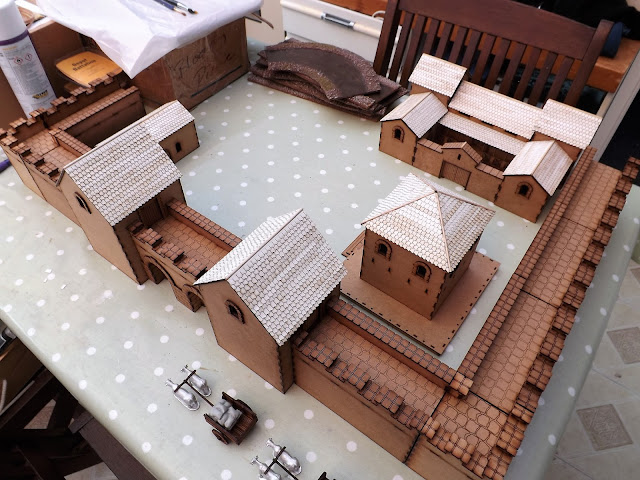 So picking up from my last post, the buildings were put together but needed work to stop them looking like MDF.

The first part of that process was to apply the Warbases sets of Roman tiles, which I think are a must purchase item if you are going to build these kits as I find the stencilled roofs don't really cut it, if you'll excuse the pun, and the tiling adds that much needed three dimensional effect, particularly when they get painted. 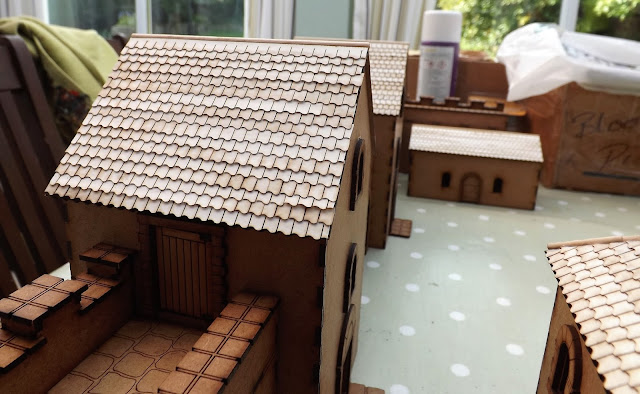 There is something really satisfying applying tiles to roofs and aligning each row, one with another.

I know this kind of stuff is not for everyone, but I see this as all part of the creative process that makes the hobby such fun and, once done, leaves you with a great sense of satisfaction.

I guess the other aspect is that the models start to feel more self created rather than bought off the shelf. 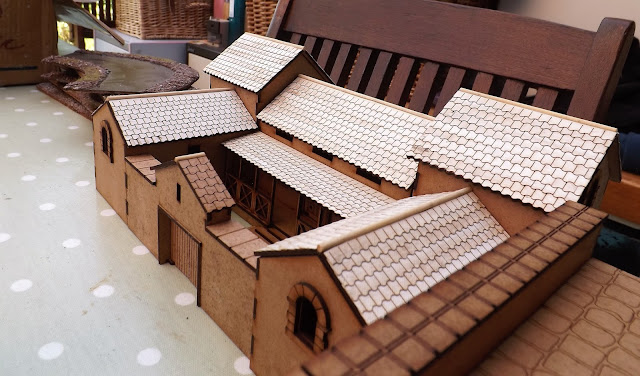 The Villa and Walled Gate House are supplied with dowel rods to complete the roofs with a ridge tile, but the temple isn't. With a much narrower gap that needed filling once the tiles were on I scratch-built my ridge tiles with cocktail sticks liberally applied with PVA to fill the grove.

Note the temple building doesn't have its veranda roof and railing up yet as I wanted to leave the wall open for painting and so will add them afterwards.

Likewise the Villa front porch roof and railings are not stuck on so I can easily get at the front wall to paint it. 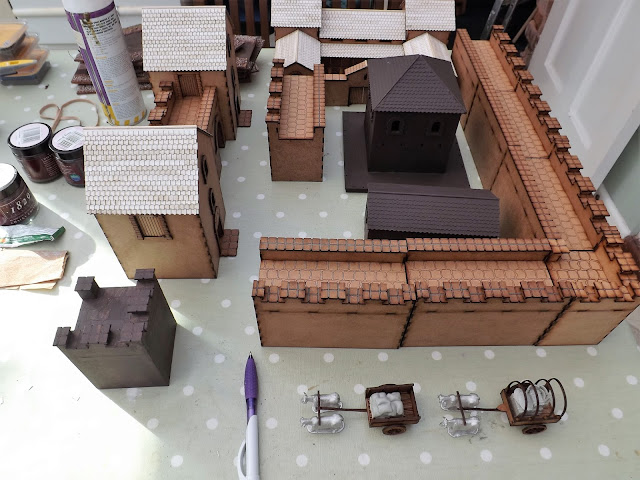 Once the tiling was done I needed to something about those lasered joints on the corners of each building.

The roofs were taken care of with their layer of tiles, but those corner joints are an eye-sore with MDF models and in my opinion need covering.

So each building received a coat of watered down PVA to seal in the brown gunge that can ooze from these joints if you try and paint over them. 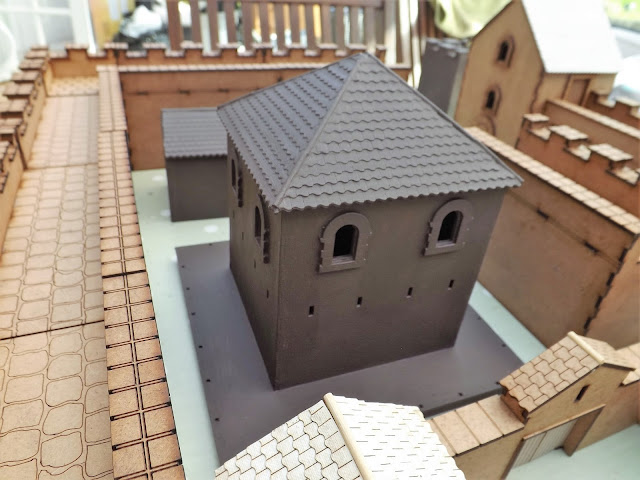 The next stage was to smear a layer of wet plaster over each and every corner seam, that is until I ran out of plaster, so decided to prime a few of the completed buildings with my trusty 1829 Clove Brown emulsion paint from Homebase, which does the job off giving that bitter chocolate brown undercoat. 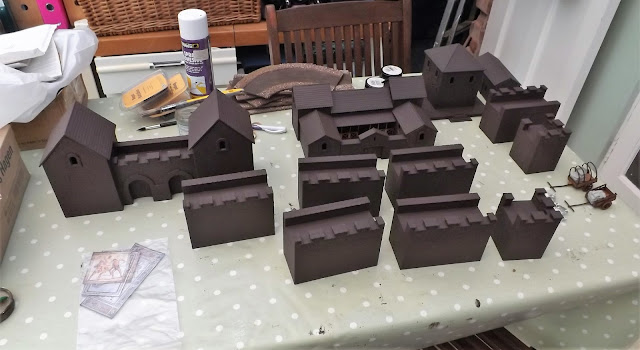 Once I had replenished my supply of quick dry plaster the day was spent undercoating all the other buildings and wall sections with not a nasty MDF joint still in sight. In fact you might think this lot was resin!

I know Martin at Warbases has some lovely looking curved wall corners he has created that I am eagerly looking forward to and then you will be able to produce a Hadrian's Wall effect as well.

Anyway, focus JJ on the job in hand. With the undercoat on and dry we can now press on with the really fun bit of making this lot look pretty and ready to grace the table. 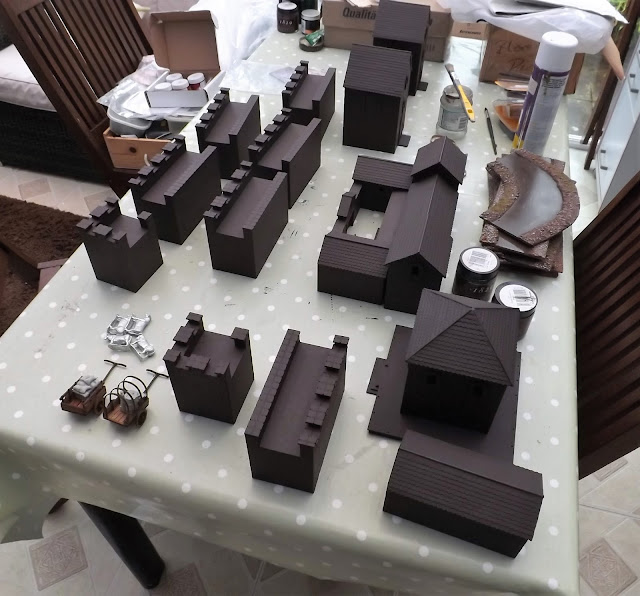 One final little extra was to produce some floor mosaics for my villa, which will have its roofs detachable and so I decided to copy Jim Duncan's idea, see the link below, of adding these examples taken off the net and resized appropriately. 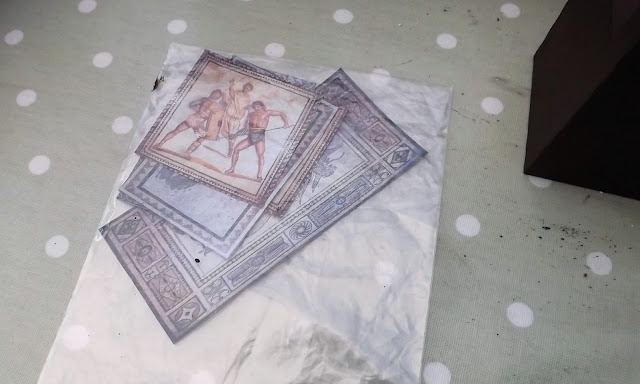 I now need to refresh my memory on the look of these buildings following the various examples visited here on JJ's and with memories of Xanten to inspire the work on the city wall.