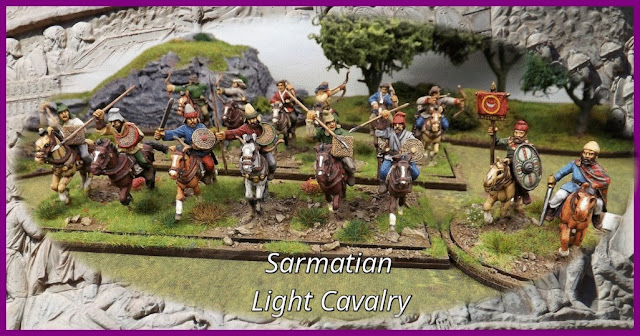 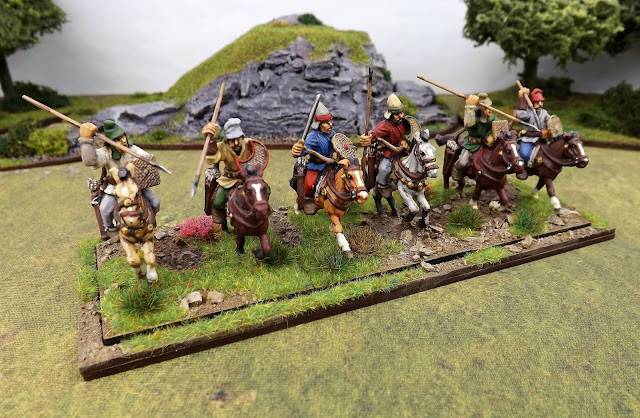 As covered in my last post looking at my second cataphtact unit I took time to describe the Sarmatian people that joined the Dacians in their war with Rome and the fact that they were a cavalry based army centred around their nomadic traditions of living on the Eurasian Steppe on horseback and moving their families with them in covered wagons. 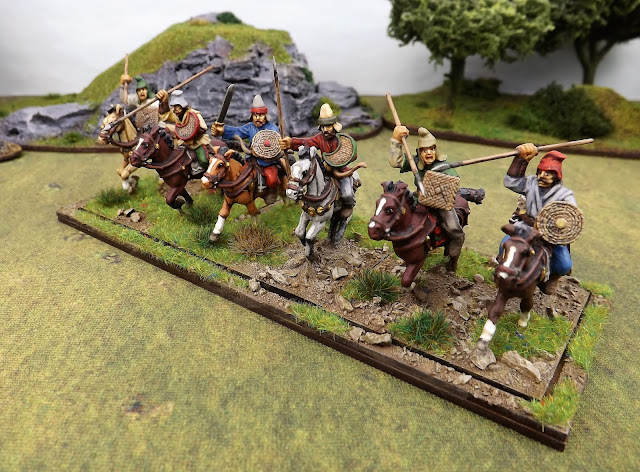 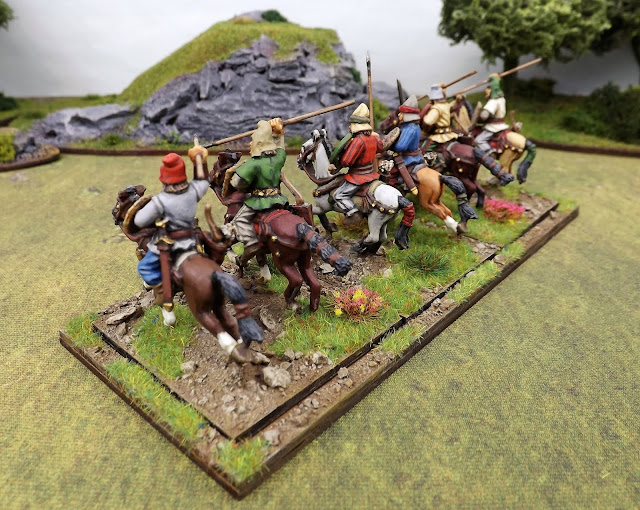 Alongside the heavily armoured and armed cataphracts the Sarmatian tribes could also call on multiple units of lightly armed horse archers and light cavalry, perfect troops for raiding and for adding their missilery in major battles. 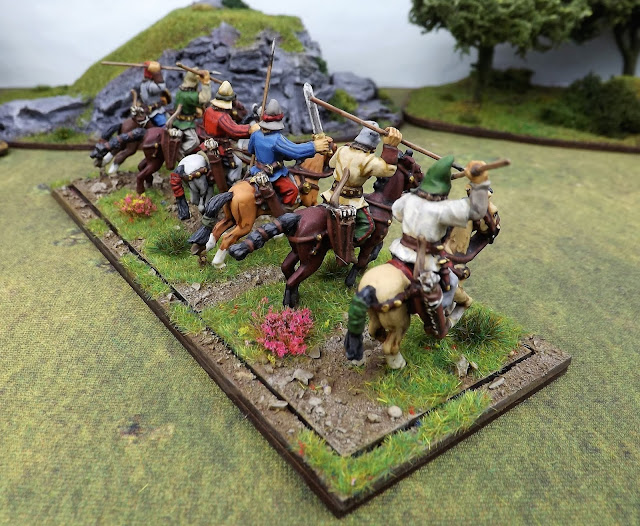 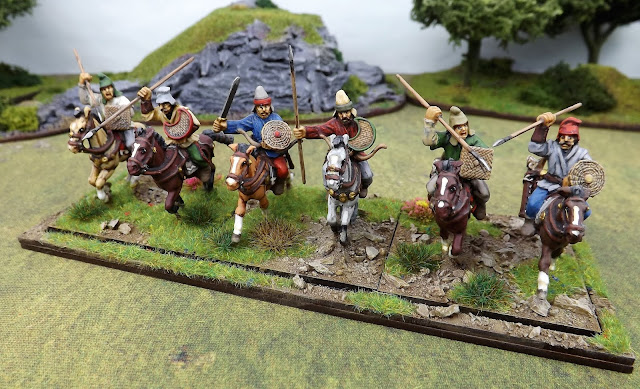 The mounted archers gain the special rule of 'Parthian Shot' allowing them to make a full move and shoot with no penalty and then immediately make a second full move after shooting, effectively moving at charge speed whilst harassing the enemy. 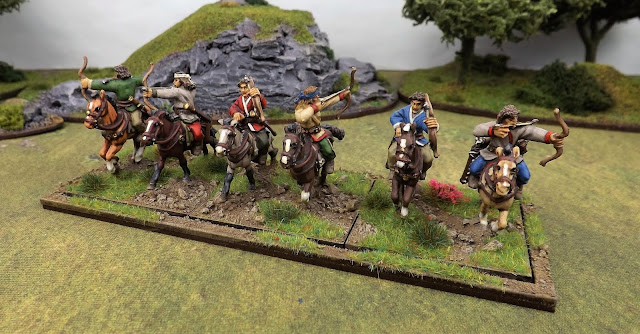 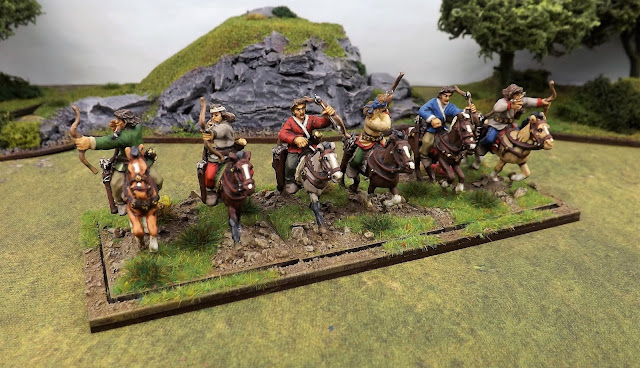 These light units are based in groups of just six figures and so rate as small units but with their lack of armour are not designed for close combat with Attack Factors of '2' for the horse archers and '3' for the light cavalry, which cross referencing those factors on the combat table below against, for example, medium armoured heavier cavalry, such as Roman auxiliaries, sees them scoring hits on their two D10 with scores of three or less and four or less respectively, before any additional factors. 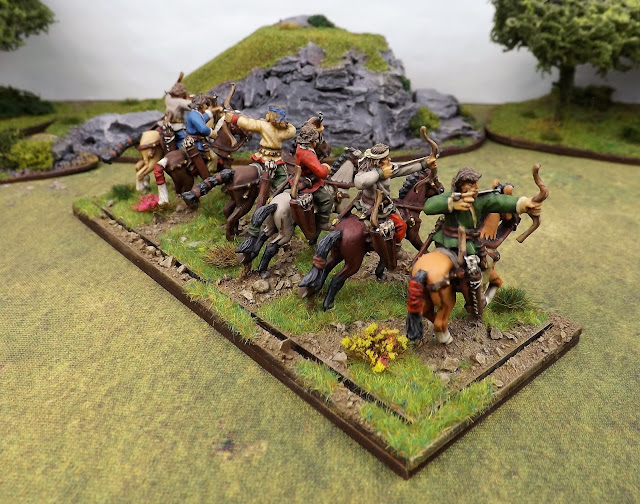 The strength of these units lies in their rapid mobility and sting offered by their shooting factors of '3' for the light cavalry and '4' for the archers as shown below on the stat card. 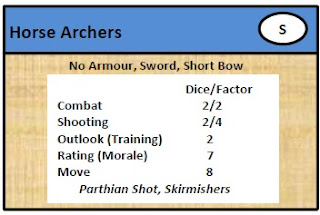 Thus the horse archers get to shoot with two D10 each time with a 50% chance of hitting, before additional factors, against medium armoured targets such as Roman cavalry or infantry and with relative impunity using the 'Parthian Shot' rule and getting the benefit of being skirmishers if shot back at. 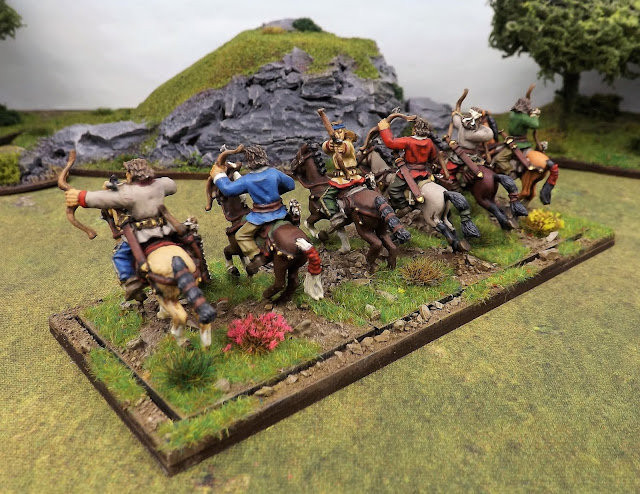 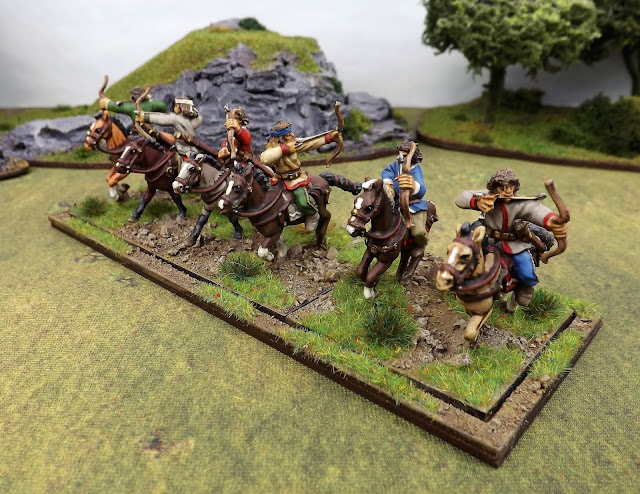 However the Sarmatians will have to be cautious operating in the close country that typifies Dacia which will offer the Romans terrain that could neutralise these cavalry units and with the use of Roman combined units, marrying their own archers in with their formed infantry and able to shoot overhead, enable some return shooting back at these lightly clad troops.

Both these units are composed of figures from the Warlord range using their Sarmatian Horse Archer and Sarmatian Light Cavalry packs. Interestingly the light cavalry although carrying bows are not modelled with the requisite bow and arrow quivers, but thanks to the the very nice team at Warlord Games I was able to rectify that with some extra parts.

These two units complete my first batch of Sarmatians and in the next unit post I am going back to complete the next six units of Dacian Warbands, starting with Warband number seven, that will compose the heavy punch for my Dacian forces.

Next up though I will be showing off my new Command Sabot Bases and putting together a YouTube presentation on the plans going into 2019 for the additions to my Romano-Dacian collection. Plus the final play-test of the Battle of Pinhoe, for Dux Bellorum, was played last night and, thanks to inputs from Bob and Steve M, I now have an interesting challenging scenario to take to the club this weekend; with an AAR to come on the DWG blog and a PDF of the scenario to be posted here on JJ's.
Posted by carojon at 00:19