As well as enjoying a visit to Partizan in May, which coming up from Exeter is a bit of an expedition, the chaps from the DWG like to make a weekend of our time away and so have arranged to gather over the previous two trips at Wargames Foundry to pick up some figures and to roll some bones.

We had a very enjoyable game of Dux Bellorum this time last year and the rules work well for a large group and with a lot of Dark Age collections between us enable everyone to be kitted out with a suitable force.

Last year we played the 'End of Reign' scenario which saw both sides going at it trying to cause the demise of each others king.

This year we went for the 'Bards Tale' which as you will see produces an entirely different type of battle in that all the players of the different forces are looking to create situations where they are able to cause enemy units to disperse or have their own units do the same thing, provided the bard that accompanies their army is present to witness the glorious end to the combat and add it to their repertoire of songs and poems to be rolled out at the next feast in the Lord's Great Hall. 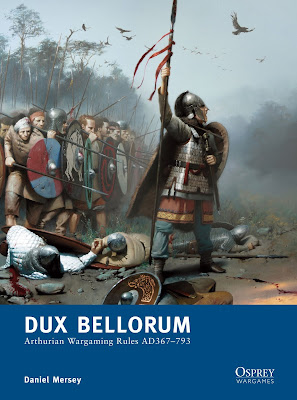 Thus with every great deed of valour witnessed by the attached bard, victory points are accrued at the end of the game and we end up with the slain littering the battlefield, opposing armies dispersed and the most successful (in a very Dark Ages way) commanders identified, to be long remembered in song and verse. 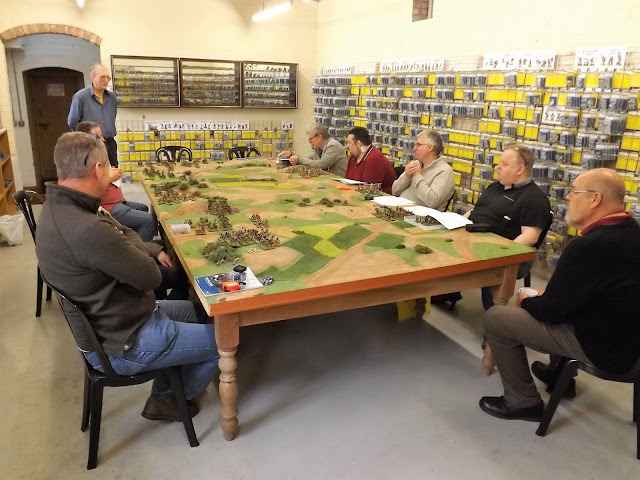 The more I play Dux Bellorum, the more I like them and they really seem to capture the feel of these kind of battles for me.


You really can't beat the look and drama these figures create with their multicoloured banners and shields with two opposing lines ready to get stuck in.

The scenarios provided in Dux Bellorum are designed to create the typical types of battles that populate the chronicles recording them, given the sparse amount of detail there is to base that upon.

Needless to say killing opposing kings, fighting for control of territorial boundaries often at river and stream crossings is what this kind of fighting is all about.

However an important aspect of these kind of armies was the bonds that tied them together, with kings granting rings and favours to their most loyal and capable followers and the legacy to be left from a life often short and brutal.

That is where the bard comes in, to make sure that a warriors immortality is guaranteed with his deeds of valour and sacrifice long remembered in song and verse, giving inspiration to those that come after.

King's such as Alfred new the importance of cultivating reading and writing within their nobility and making sure that a few well placed supporters within the religious estates were writing the chronicles in a favourable way.

Some of the participants in this particular battle, after reading my account, might ask what's changed, to which I would answer, nothing, my chronicle my version! Ha ha ha ha!


One account of this titanic struggle might waste time over petty details, such as Nathan, Tom and Panjo scoring highly in this battle, but the actual version that has come to us from the few remaining sources talks about the valiant Viking king in the centre of the line who anchoring his line, forced the dispersion of the army of the usurper, seen to run from the forward lines screaming to anyone that would listen about how unfair it all was and how they didn't expect to find a force using Shieldwall!! 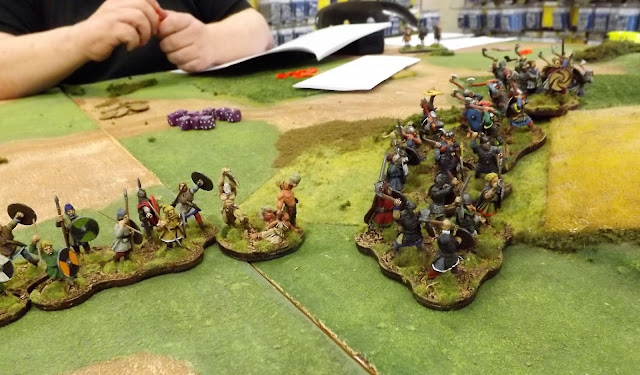 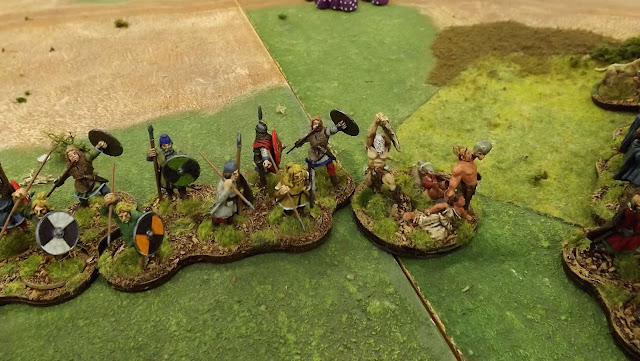 If you haven't played this scenario, I would suggest you give it a go, coming as it does as one of the favourites of the author.

The victory conditions, with a greater focus on individual combats rather than just which army won or lost, really do produce a more open free flowing kind of game with players losing a lot of their inhibitions about getting stuck in and the fun of working out the best place for a bard at any given time.

You can still lose a combat, but if your bard is there to witness your end, you can still score points.

As you can see from the end of battle shots, both armies were well and truly done in at the end, literally leaving the last men standing.


Thank you to Diane Ansell and her team at Wargames Foundry for hosting us again and thanks to the chaps for all the fun.

Here's looking forward to next year.

Next up - I'm off walking Offa's Dyke and visiting Shrewsbury with Mr Steve this week, so will look to do a post about our trip, plus Roman Legionaries and the new Victrix Roman General Officers are nearly finished.
Posted by carojon at 01:27