As with last year the Devon Wargames Group trip up to Newark to take in this May's Partizan show also included a day out at Wargames Foundry and a big game of Dux Bellorum, following last year's set to using Musket and Tomahawks.
https://jjwargames.blogspot.com/2017/05/wargames-foundry-devon-wargames-group.html

Jason over at the Welsh Wargamer in Devon blog top-lined this game which saw our combined forces of Vikings, Saxons, Scots/Irish and Romano British troops taking to the field in a straight-forward scenario, 'End of Reign'
https://welshwargamesdevon.blogspot.com/ 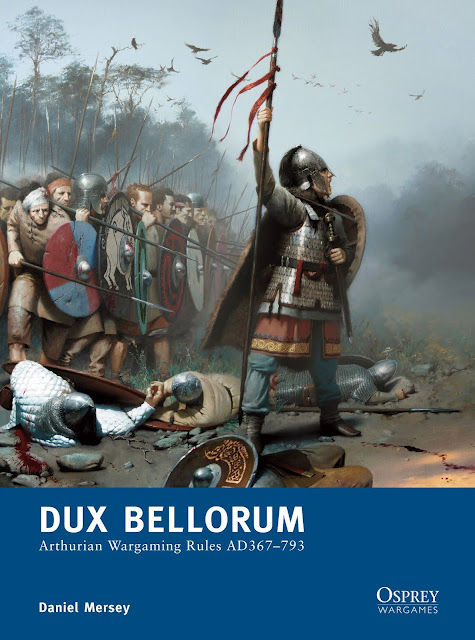 To quote from the rule book description of this scenario;
"A Warlord's life could be short and brutal, often ending on the battlefield. One sequence of events in the 7th century highlights this only to well: AD 633 at Hatfield Chase Cadwallon and Penda slay Edwin, AD 634 at Havenfield Oswald slays Cadwallon, AD 642 at Maserfeld, Penda slays Oswald, and finally AD 655 at Winwaed Oswiu slays Penda. Phew! The aim of this scenario is to kill your opponents Leader, with other casualties being almost irrelevant." 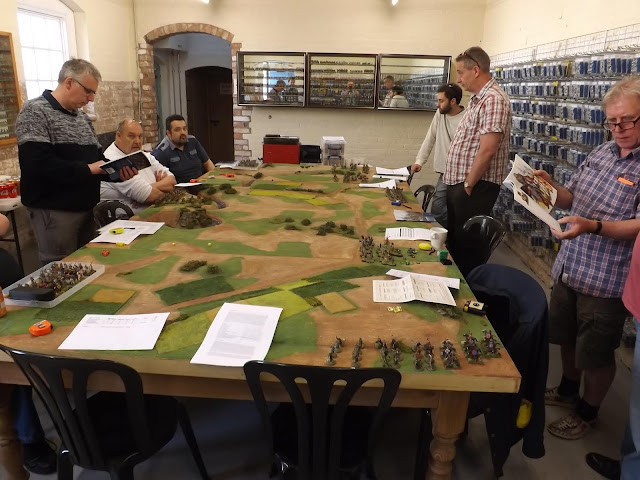 Once everyone had arrived after an early morning start, to travel from one end of the Fosse Way to the other, namely Devonshire to Nottinghamshire and a reviving brew, the troops were assembled into Dux Bel forces with Steve M  and Pingu commanding their respective sides. 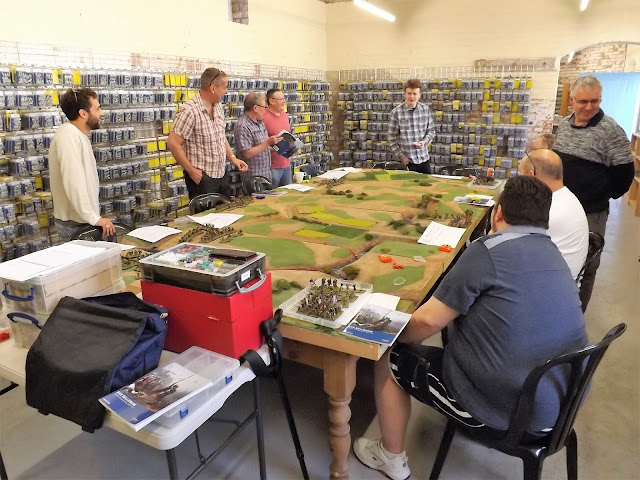 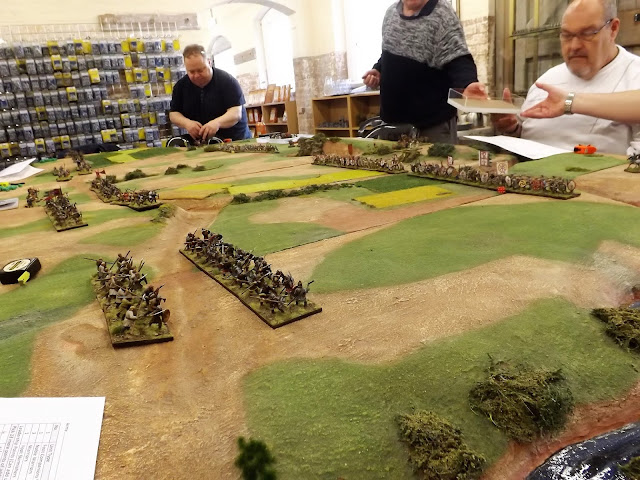 Between the members of the Devon Wargames Group we now have a very large collection of Dark Age figures and the period gets a regular outing in club games.

Thus it was a good choice for allowing us to fill a good size table with figures. 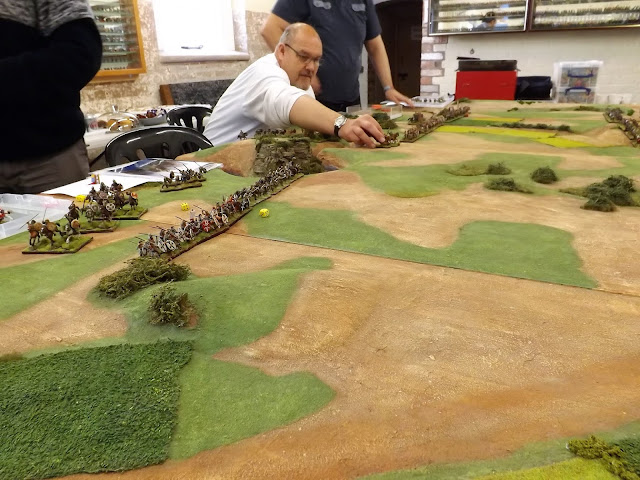 As you will know I spent the last few months of 2017 early 2018 putting together my own Saxon/Viking collection and this was the first occasion that I had nearly all of them on the table with two Saxon and a Viking force fielded as per Dux Bellorum. 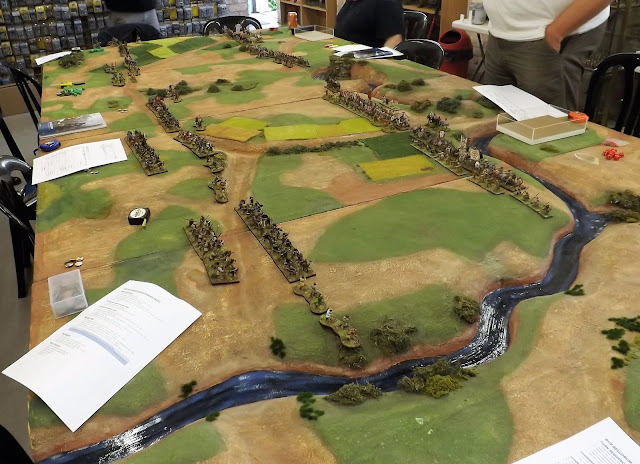 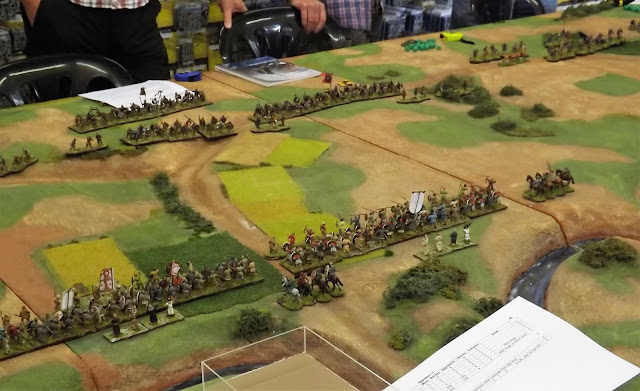 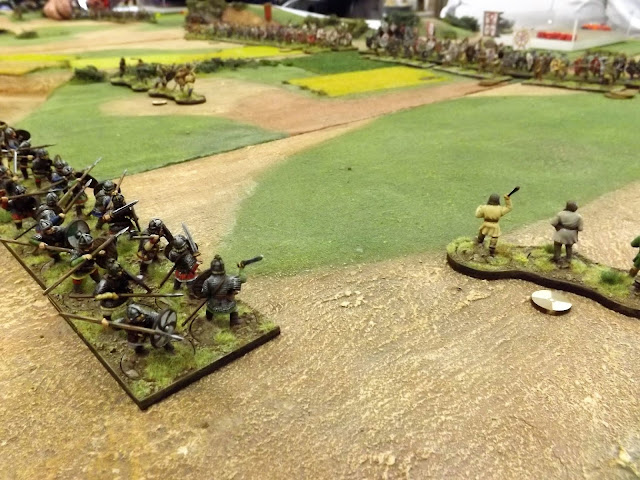 Dux Bellorum has been featured here and on the Devon Wargames blog and is a proven favourite set of rules which easily handles multiple players and gives lots of decision points during the game for commanders to decide how best to wield their particular army. 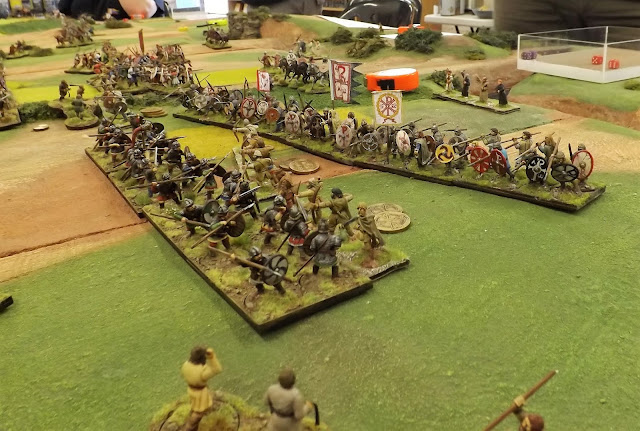 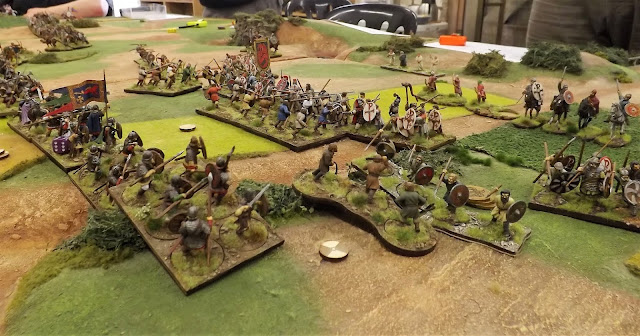 They are not a particularly complicated set of rules and I am still finding new ways of adapting them to the way we like to play.

One particular adaptation for this game that I hadn't played before was to roll a die to determine if a saving attempt was successful rather than allow it to be so automatically. 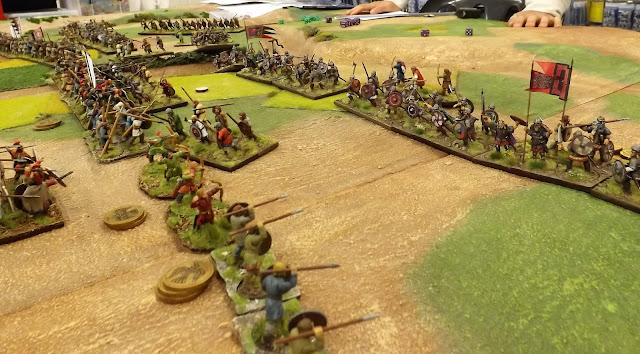 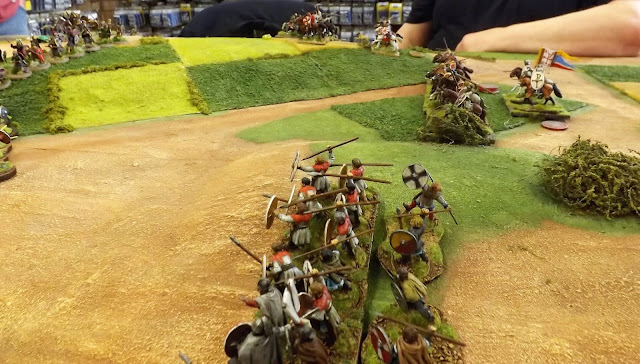 This small change requiring a roll of 4,5 or 6 on a d6 to confirm the saving attempt made the combats slightly less predictable and much more interesting particularly with shield-walls and I think is something I will use from now on. 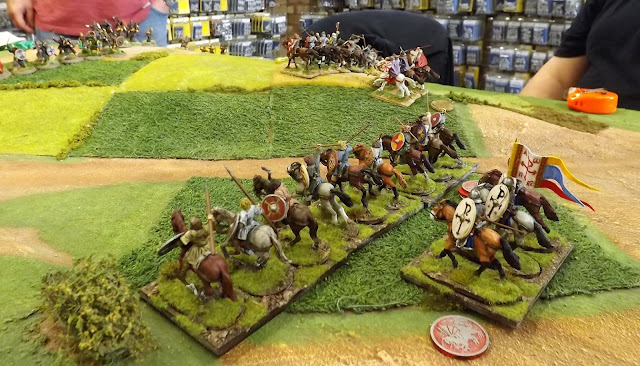 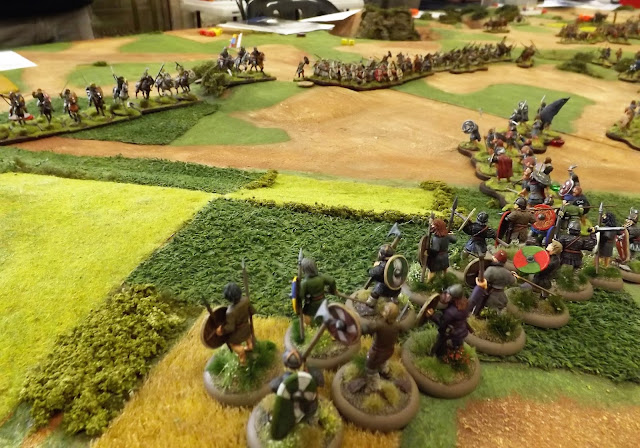 The afternoon swung along with the good folks at Foundry keeping everyone fed and watered throughout the day and with the simple objective faced by the opposing armies meant that axes were swung and spears jabbed in happy abandonment with casualties piling up along the two lines. 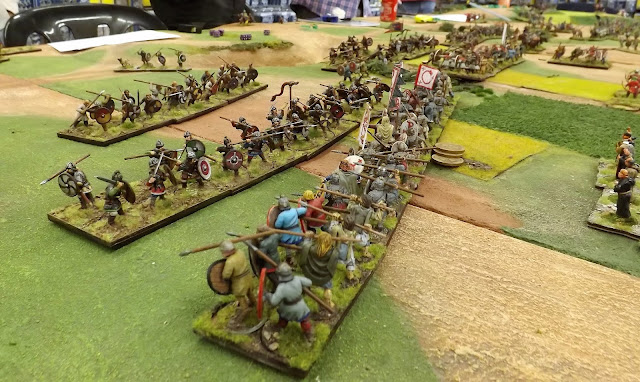 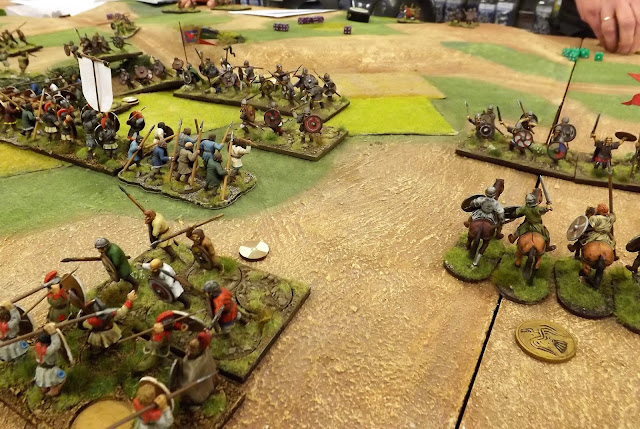 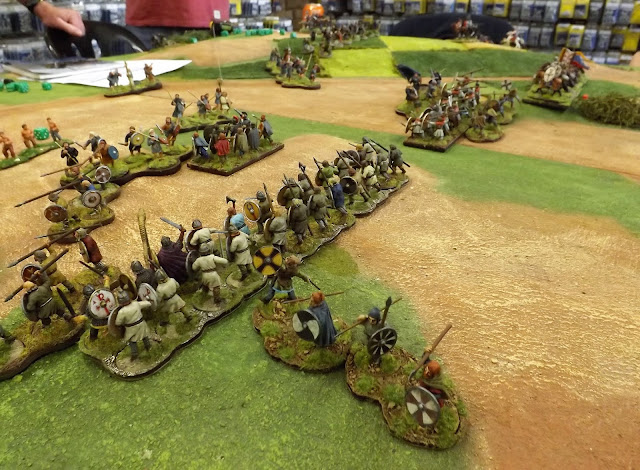 Sadly Jason's Brits managed to get the better of my brave fierce Saxons out on King Steve's right flank with my warlord going down in a bloody battle that saw both sides in a terrible state at the end. 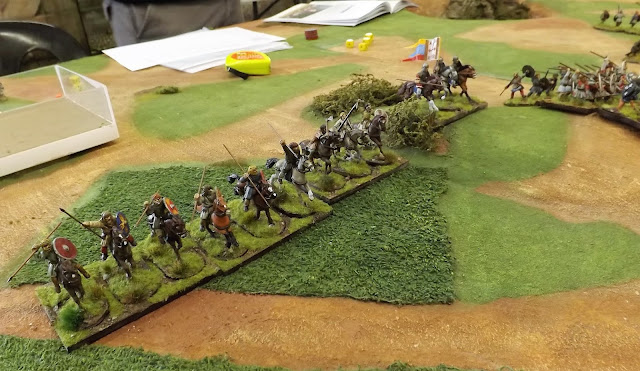 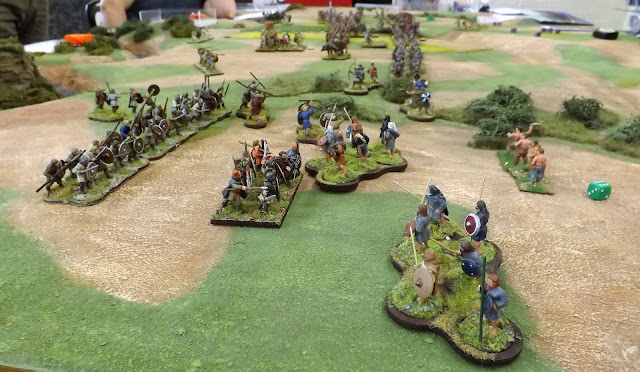 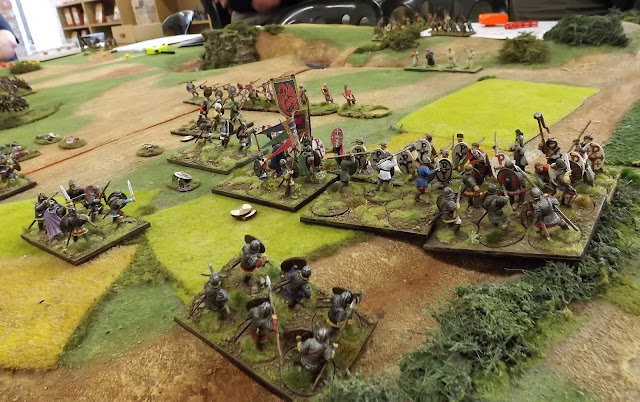 Fortunately Steve and Tom managed to get control of the centre whilst Chas and Vince held the left flank and surround King Pingu with a wall of spears and axes that saw him fall just as both sides were starting to suffer morale failure losses. 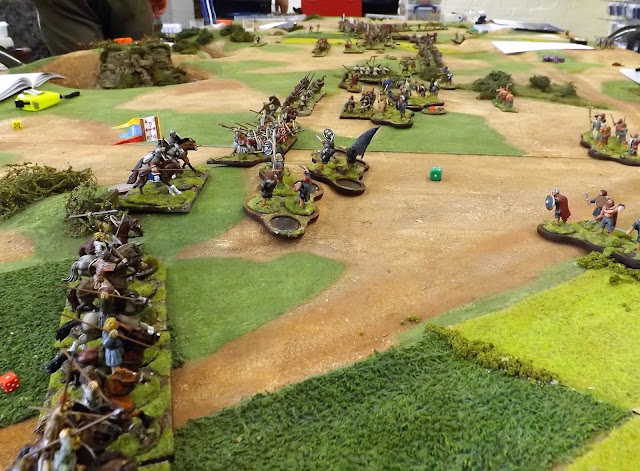 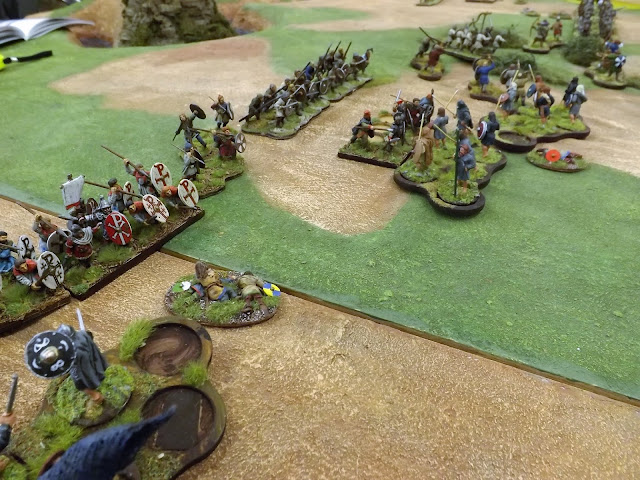 As with last year, this little pre-Partizan gathering at Wargames Foundry was great fun and with a curry in Lincoln that evening made for a thoroughly enjoyable weekend.

Thanks to Vince, Chas Steve M, Tom, Jason, Nathan, Pingu and Andy for all the fun.
Posted by carojon at 06:19