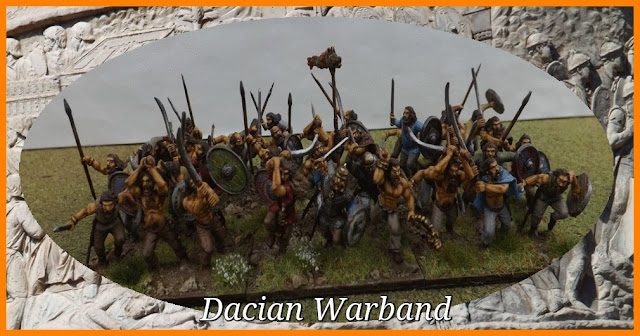 Well I'm back refreshed and recharged after a sixteen day break in the Ionian Isles, principally Corfu and Paxos, where a healthy bit of sun, sea and great Greek cuisine has helped set me up for getting stuck into my current projects. 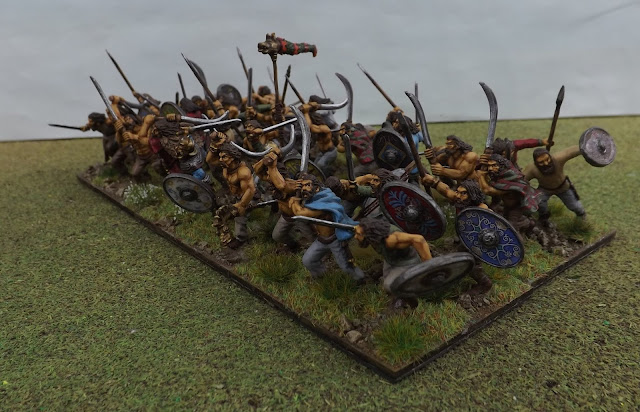 Knowing that my sojourn would mean an enforced break from the painting table I was very keen to get the desk cleared of work before I went away and thus I literally finished the fourth Dacian Warband together with my first commander the day before we flew out and thus had no time to bring you pictures of the collection too date. 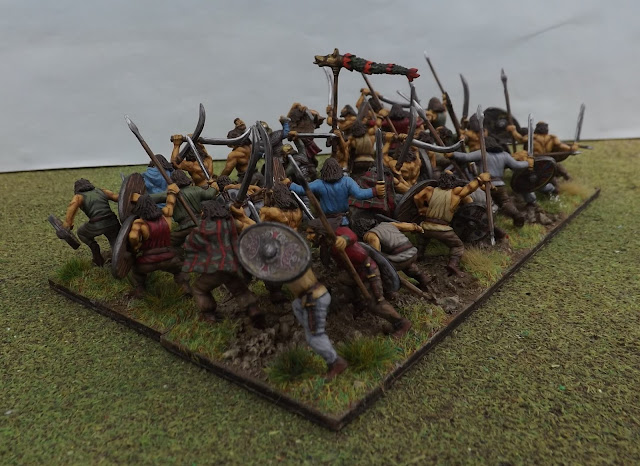 So here is warband number four, and marks the end of the current work on Dacian heavy infantry, but one that gives me a clout to the small Dacian force I am planning to field in my first game with these chaps using Augustus to Aurelian. 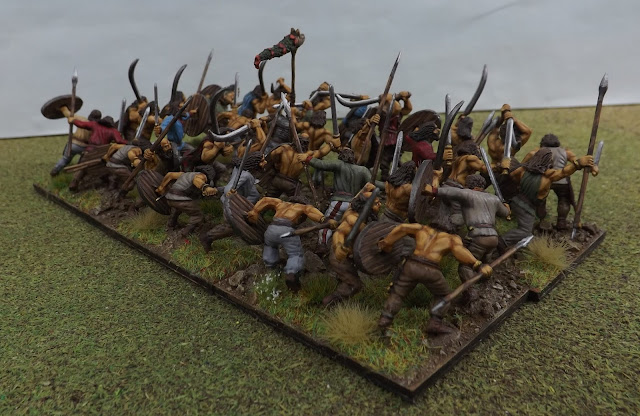 I am starting to think of these units in groups of two warbands forming a regiment of about 2,000 men from a local tribal area and to mark their association I am looking to colour code my draco standards, with eventually six regiments able to take to the table against the hated forces of Rome.

Of course each of my Dacian hosts will need a commander and I thought I would get on with painting up the first of these to command my heavies. 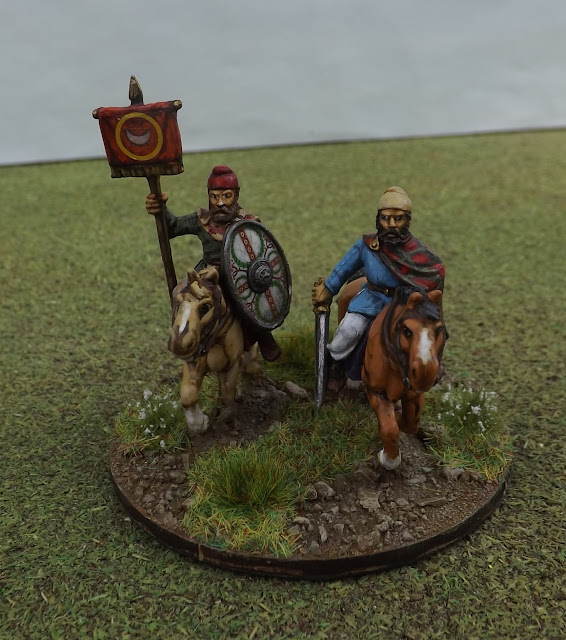 These two mounted figures are from the Wargames Foundry range which really work well with my Warlord and Victrix figures and will enable specific gaps in the other ranges to be filled. 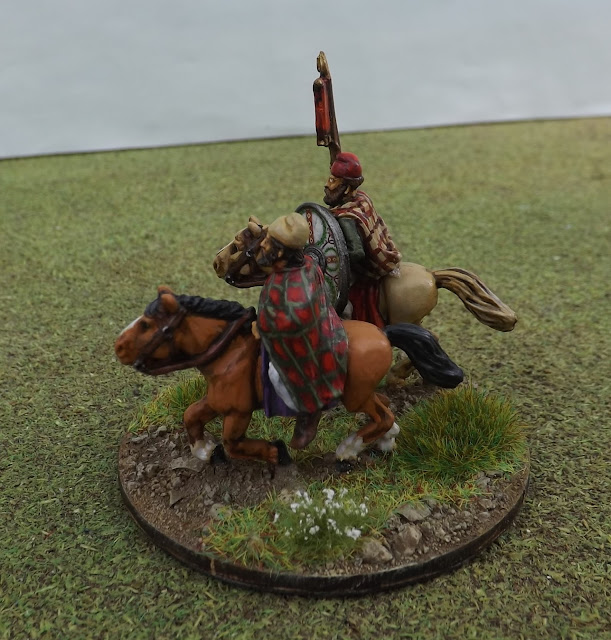 I aim to model another command group using these same figures but with some suitable head transplants to allow me to model King Decebalus and his guard either mounted or on foot. 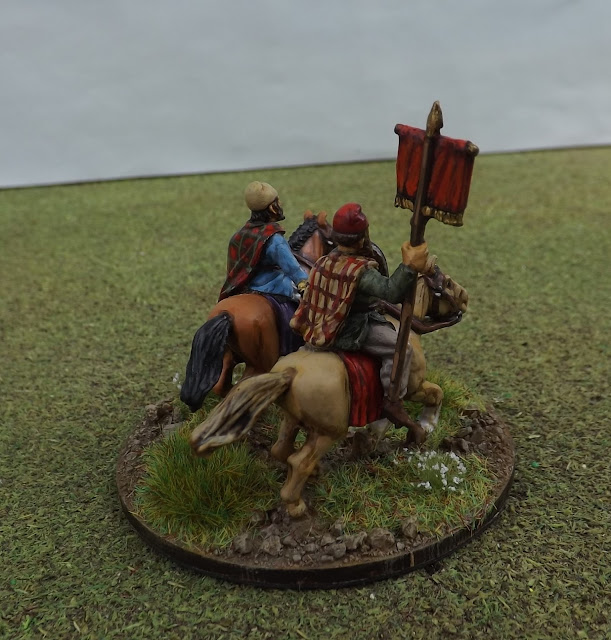 No one seems to offer suitable Dacian decals to go with the banner carried by the chap on the left so I ended up jury rigging it with some suitable decals I had in the spares box.

It is not perfect by any means but seems to work when viewed amongst the Dacian horde. 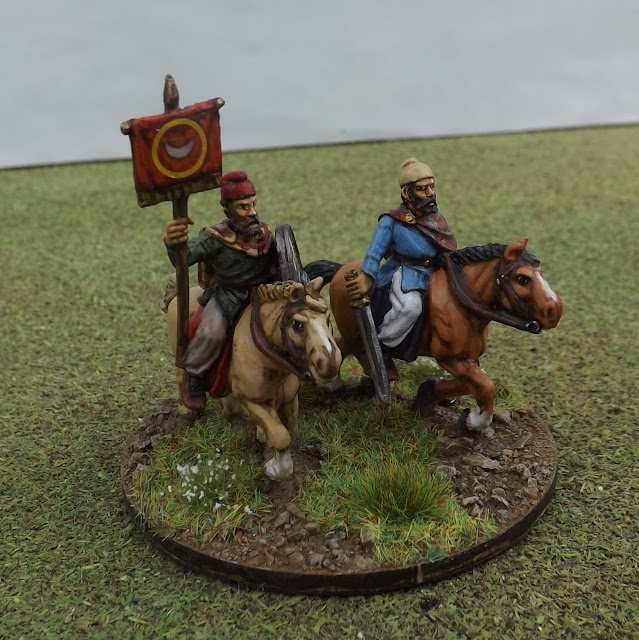 Talking of hordes, I thought you might like to see the effect I am trying to create with these large units and hopefully a terrifying spectacle for my Roman commanders to deal with. 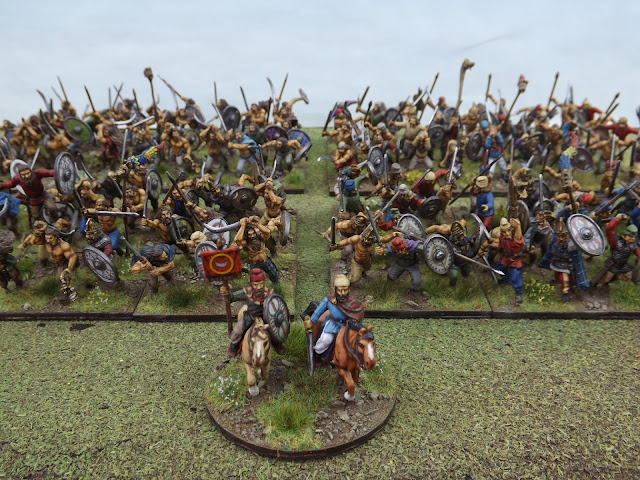 I think en-mass with a sprinkling of archers and javelin-men, not to mention a few Sarmatian cavalry units, oh and don't forget a few scorpion bolt throwers for good measure, the Dacians should give my Romans a good run for their money in most table-top encounters. 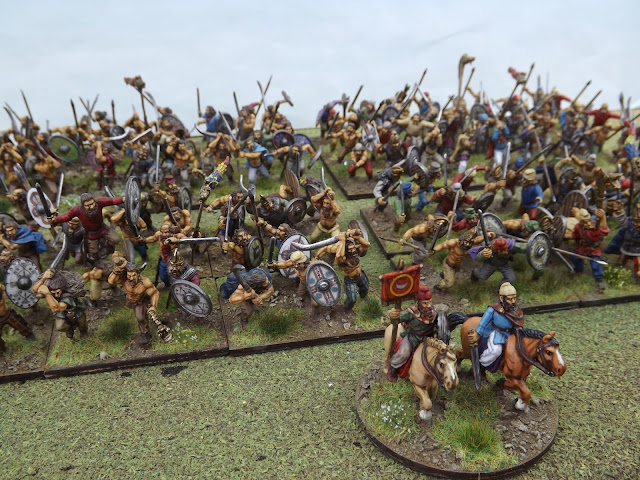 Speaking of archers, javelin-men and scorpions, guess whats up next on the planned unit shots, before we turn our attention to the bringers of Pax Romana and civilisation. 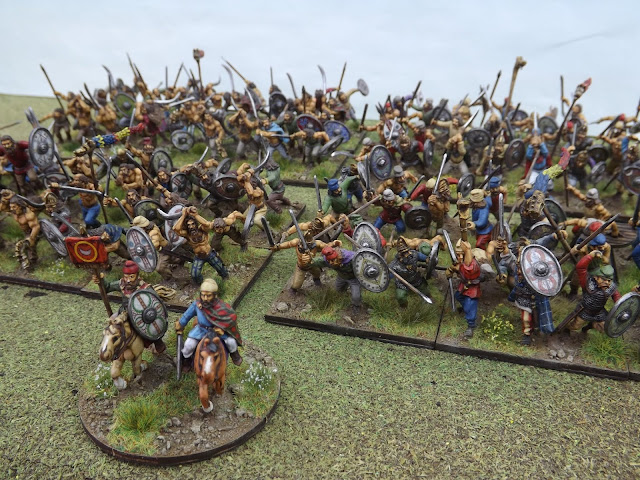 Lots of stuff to come on JJ's with trips to Wargames Foundry, Stoke Field and The Ridgeway to report back on, plus some work I have done with the chaps over at Stand to Games putting together a scenario book to accompany 'Over the Hills' Napoleonic rules.

Over the Hills is a fast growing Napoleonic rule set with a thriving community of players set now to  be joined by gamers like me interested in the AWI with the successful funding announced this week of their next addition to the rules family and the publication of 'Rise and Fight Again'.

In addition to Over the Hills I am working on putting together my files for another great set of rules I like to play here on JJ's, namely Carnage & Glory II, which I am planning to make available to compliment the work on the OTH book and enable C&G players to easily adapt the scenarios to their preferred rule set.