Last weekend the Devon Wargames Group and friends, Panjo and Andy, went on tour with a trip up to Nottinghamshire to take in the delights of Wargames Foundry on the Saturday and Partizan on Sunday interspersed with a bit of merriment and battlefield sight seeing.

The trip up to Foundry based in Newark took just under four hours, so setting out at about 07.00 we were up to their show-room/shop/games-room for about 11.00 in time to get started on our game before lunch, provided by our hosts mixed in with a bit of occasional retail therapy.

When Tom, Vince, Steve M and I arrived the other guys were already there, so once the table was set up and the respective forces laid out, Mr Steve M our Gamemeister for the day briefed the players on their objectives.

Our game was a French Indian War 'big bash' using Muskets & Tomahawks, with Steve overseeing the card deck to herd the cats that playing a big game in our club can sometimes feel like, especially with the added distraction of all those lovely Foundry figures in close proximity just asking to be given a new home. 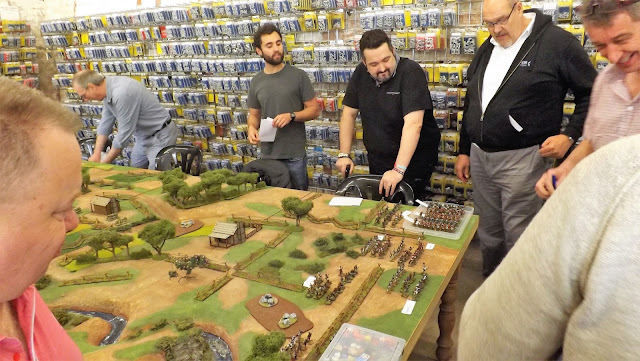 We were looked after during the day by Diane Ansell and her team who kept our strengths up with liberal lashings of tea and coffee together with other sustenance as well as dealing with our purchases.

The premise of our game was a fairly straight forward encounter mission between the two opposing armies with each player commanding a different mix of three or four units of Indians, Regulars, Militia and Ranger/Coureur de Bois types but with each player also having an individual task to perform during the play.

This mechanism meant that as well as dealing with the threat posed by the enemy opposite each player had an eye on an objective close by that had to be kept in mind as the forces tried to grab control of various parts of the table.

As an example I ended up commanding a group of ten Militia, eight locally raised Irregulars and eight Indians, with the task of securing a wagon in the opposite half of the table and dragging it back into French lines.

My particular task was made extremely difficult as the open space between my occupied barn opposite my objective was covered by Tom's British light infantry and regulars tasked with searching the buildings around to safely escort a party of officers ladies to the rear.

No matter how much fire I laid down on the cover close by the wagon, his light infantry held firm and I ended up taking my frustration out on "Mr Steve" in the sector next door by continually showering his Rangers with a barrage of arrows that took out four of their number over the course of the game. 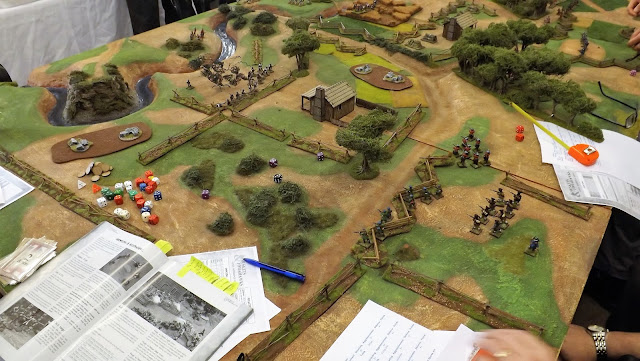 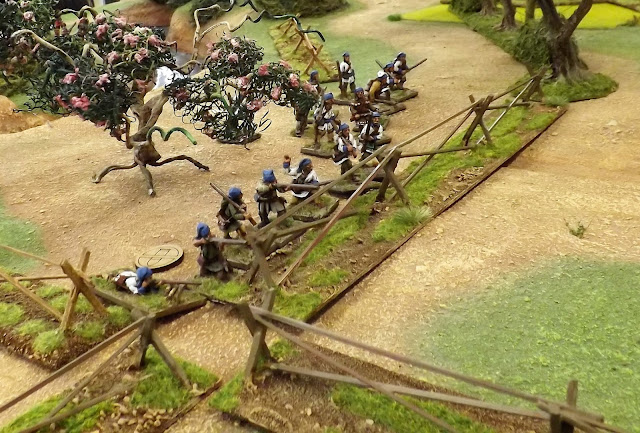 As the two lines closed on each other as each side sought to grab the best terrain from which to run their battle, the game settled into a struggle to wear down the enemy opposite to allow more freedom of movement to do the tasks each of us had been set.

Some rules are not particularly suitable for these kind of large friendly games, but Muskets & Tomahawks were a perfect accompaniment and kept the play flowing very well as the variation in card draw made sure that play from one turn to another was never in the same sequence. 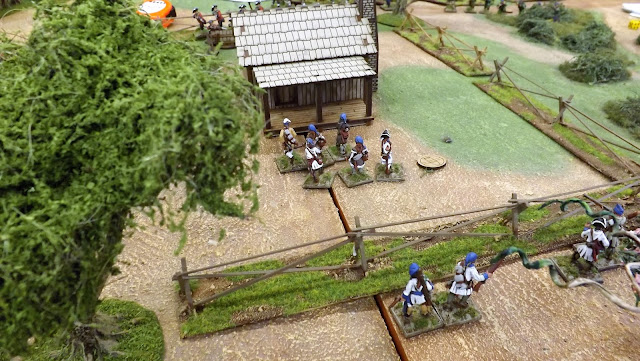 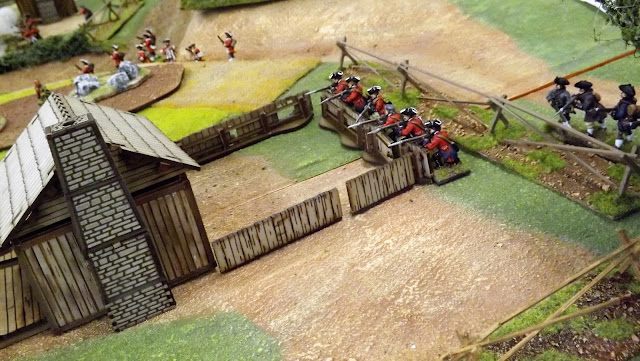 As our game progressed some player objectives began to be achieved as the battle started to swing in different directions across the front. 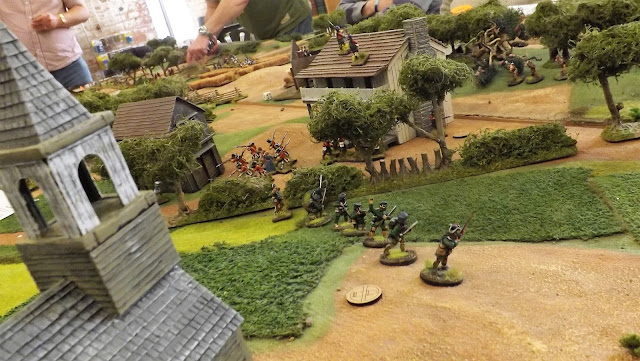 With two British and one French objective achieved and with the day drawing to a close we called the game a British victory. 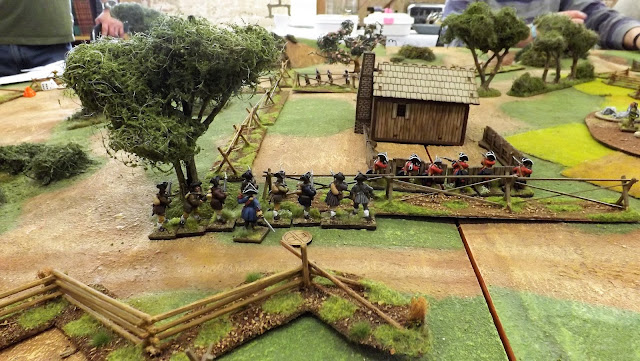 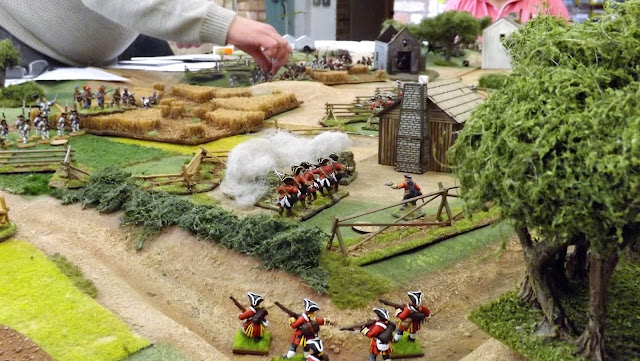 The game was a triumph of organisation and thanks go to the DWG members who provided figures and terrain to populate the Foundry provided tables, but principally to Steve M who pulled the game together and provided the bulk of figures from his very fine collection.

Thanks also to Diane and Wargames Foundry for hosting our day out. We were all made very welcome and thoroughly enjoyed the day.

Oh and not forgetting my retail therapy, aided and abetted by Mr Steve who kept thrusting packs under my nose all day, I picked up enough figures to build a Roman citizen legion together with some fine German ladies exhorting their men folk to kill lots of Romans and spare them from a fate worse than death.

Before heading off to our hotel in Lincoln about forty minutes up the road, we decided to check out the battlefield of Stoke Field which is situated right next door to the Foundry workshops.

Unfortunately during our game the day had developed into perfect wargaming weather with a torrential downpour by the time we stepped out into daylight.

Thus we contented ourselves with a visit to the church next door and a drive around the back of the battle field to see the area of the "Red Gutter"where some of the fleeing rebel soldiers met their end during the rout towards the River Trent and in which several grave pits were discovered.

If you are interested, Wargames Foundry are promoting activities in support of the 530th commemoration of the battle next month and I have attached the link to their site for booking tickets. 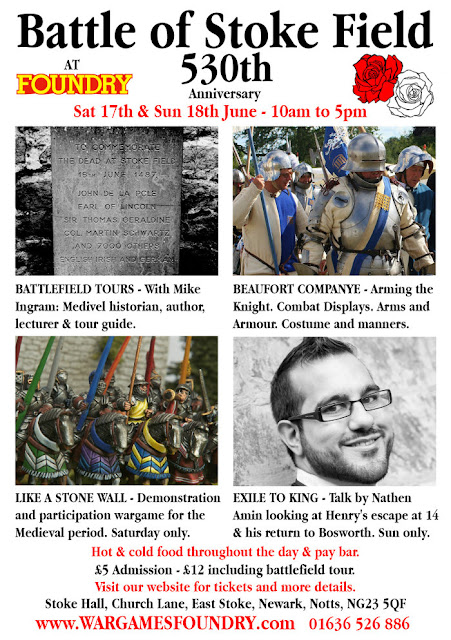 The following pictures show the steep escarpment at the back of Stoke Field down which the rebel troops sought to escape at the close of the battle. 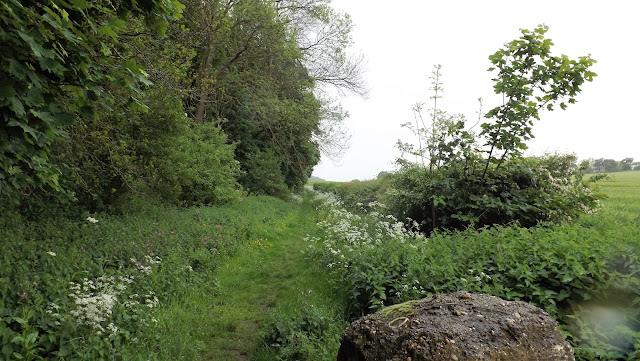 You can always tell when I have gone the extra mile for this blog when you can detect rain drops on the lens in the lower right corner of these pictures.

For a fuller understanding of the location of the "Red Gutter" area seen here, follow the link above to the Battlefields Trust site for a fuller explanation of the action together with a range of superb maps illustrating the possible positions of the two forces. 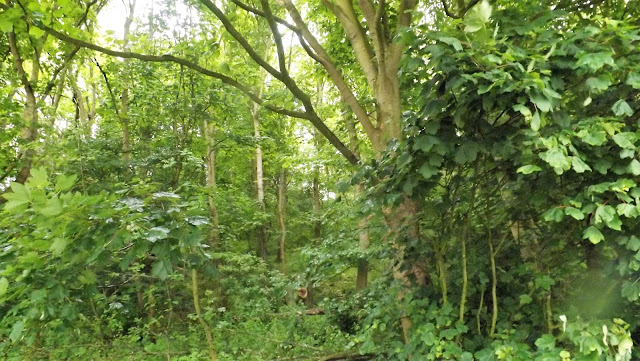 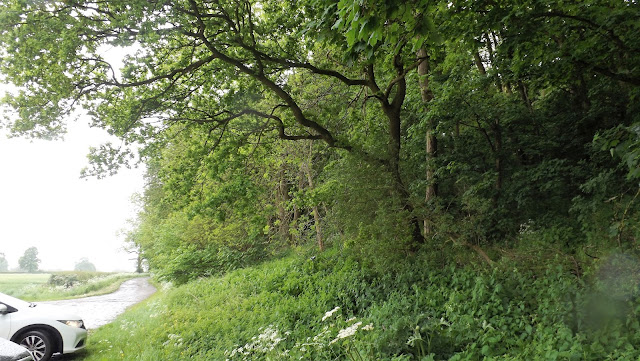 With the weather as bad as it was we contented ourselves to plan another visit to do this site justice on a future visit.

Next up the Queen's Sconce Newark and that Book Review.
Posted by carojon at 23:58