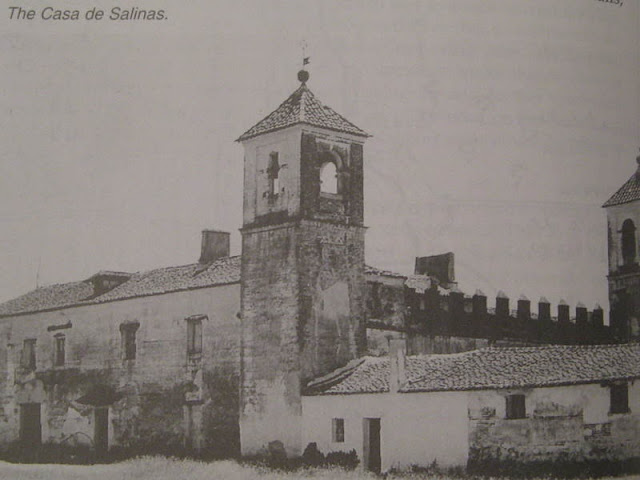 Yesterday was a a bit different from a normal second Saturday of the month as I would usually have been at the regular monthly club meet up of the DWG.

This month however, clashed with our local show hosted by the Exmouth Wargamers, "Legionary" and so we decided in the main to relocate our meeting to the show by running two games, a 'Pickett's Charge' game in 28mm and my 18mm Napoleonic collection to run a test game of Casa de Salinas 1809 using 'Over the Hills'.

Things are still in a bit of a state of upheaval at home but here is all the stuff ready for the game, Saturday morning with bare floor-boards awaiting the new flooring on Monday.

Legionary is a really nice local show and we got to the venue at 9am to have everything ready for 10am and doors opening. As usual the day was a gentle hub-bub of wargamers enjoying themselves, interrupted by old friends popping by to say hello as we got ready to play the game.

I have been trying out several of my scenarios using Over the Hills recently, including Vimeiro and Barrosa which were reported on at the DWG Blog

This would be the first test of the Casa de Salinas scenario which is the first in a series of games that recreates the fighting over two days, 27th-28th July 1809, at Talavara.

The situation is that on the 27th July, at around midday, the last units of Cuesta's Spanish Army of Estremadura made their way back over the River Alberche after a difficult march whilst pursued by the now combined French I and IVth Corps under King Joseph.


To relieve the tired Spanish troops and allow them to fall back unmolested onto the Talavera position, Wellesley placed the British 3rd Division across a nearby road junction to act as a rearguard against the pursuing French.

With infantry defending the wooded thick undergrowth in front of the deserted Casa de Salinas farm complex and with Anson's Light cavalry brigade covering the open ground to the south, the position looked like a sound one for the British troops to delay the French by at least forcing them to deploy off the march.

The British troops at this stage of the Peninsular War were still relatively inexperienced and a combination of poor picket duty and Marshal Victor's knowledge of the terrain allowed the French infantry to pass over the Alberche further to the north, unspotted by Sir Arthur Wellesley observing other French troops crossing further south from a high tower on the wall surrounding the farm. 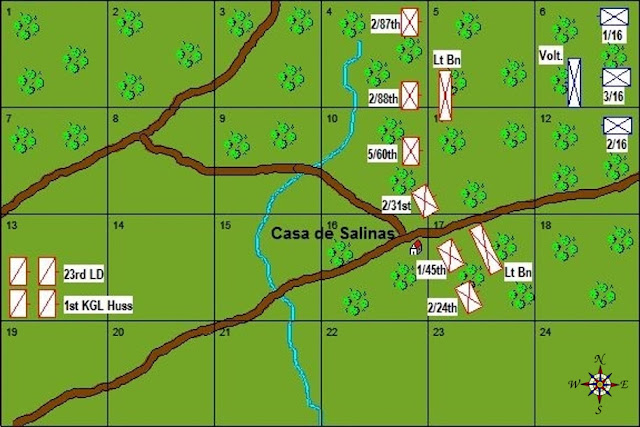 The surprise attack developed quickly, catching the infantry of Donkin's brigade (2/87th and 2/88th) sat around on the ground enjoying the shade of the trees in the hot Spanish sun and narrowly missed capturing Wellesley as he sprinted to his horse tethered close to his observation post but having its reins grabbed at by French voltigeurs as he spurred it away. The short fight would leave the British division with 400 fewer men and the French about 100, but would also deliver a hard earned lesson that would not be the last for the British forces in this battle.

What follows is a description of our game as it unfolded.

All seemed quiet as the last of Cuesta's Spanish troops trudged past the Casa de Salinas farm and Sir Arthur Wellesley doffed his hat towards his Spanish counterpart as he road into the yard to climb the nearby tower and observe the French pursuit.

The likely hood of any major attack this late in the day couldn't be ruled out but seemed unlikely given the French would be just as tired from their march pursuing the Spanish as the look of the Spanish troops betrayed as they passed by.

As Wellesley rested his glass on the arched window ledge of the tower he now looked out from, he could see the blue columns snaking their way down the slope of the higher ground on the east bank of the Alberche as the French began to cross on the Talavera road that followed the course of the River Tagus.

He was vaguely aware of the occasional pop, pop of musketry as forward pickets exchanged compliments, but then seemed to become more insistent as suddenly the 60th Rifles of Donkin's brigade were called to arms by the sounding of their bugles and the redcoats turned to look in the direction of the tree line as light infantry skirmish companies suddenly appeared falling back firing at, as yet, unseen pursuers.

Suddenly massed columns of French Legere charged out from the trees catching the 2/88th as they desperately tried to form line and issue some defensive fire.

Two of the columns kept on coming and the Irish troops fired as they fell back, stopping the attack but only by trading ground.

Just as French voltigeurs pushed back the British light troops, Sir Arthur Wellesley emerged through the front gates to be greeted by some well aimed shots, one of which seemed to graze the British general's right shoulder as he and his staff spurred their mounts back up the road towards Anson's cavalry.

The clock showed an hour and fifteen minutes had passed since the French attack had begun and both British brigades had recoiled under the ferocity of the attack but had not had any of their units broken; with the 2/88th the seemingly worst affected battalion causing both General's Donkin and Mackenzie to ride over and help steady the new battalion.


The French had also been surprised by the resistance shown by the British troops who didn't seem to behave like Austrians or Prussians and seemed to refuse to acknowledge when they had clearly been bested.

At the halfway stage of our scenario both British and French brigades had suffered around half their fatigue allowance lost, but the French had failed to get clear of the trees on their left and the passage of lines added to the difficulty of operating in formed columns in this difficult terrain was only adding to their problems.

The British on the other hand were now well aware of the attack and were busy rallying off the shock and forming their lines in anticipation of the French moving to occupy their former position.

On the French left in front of the farm, their commanders could congratulate themselves in forcing Wellesley from the battle slightly wounded and unable to help oversee events from now on.
The terrain though slightly more open was not much better and the French troops were forced to contend with the veteran 1/45th who were more than capable of stopping their attacks.

Solignac's brigade was however in better shape, fatigue wise, than those troops on the right and so lead the attack in the second half of our battle with two columns managing to contact the 1/45th and win the subsequent combat driving the British battalion back into the farm and behind its walls.

With the fighting now in full swing and the volley firing clear to all nearby units, General Anson led his cavalry brigade forward at the trot passing Sir Arthur and his staff as they made their way back towards Talavera.

Now rallied Donkin sought to take the pressure off of Guard's brigade by leading his brigade forward to push the French to his front back into the trees from where they had emerged.

The two sides swapped musketry and the British line seemed to waver only to see their French counterparts turn and rapidly fall back into the trees.

Donkin's men were shattered but had seen off the attack to their front and now were preparing to pull back as Anson's men drew near to cover their withdrawal.

The increased musketry in front of the farm revealed the intensity of the battle before it, as Solignac's French brigade pushed hard to break the British to their front only to reel under a crushing volley delivered by the 2/24th as the junior battalion stepped up to relieve the hard pressed 1/45th.

That and the firing from Mackenzies light troops who added to the fire of the line was enough to drive the second French brigade back.

Our game finished with just one turn from the ten in the scenario left to play and both sides had battered each other to a close finish and answered lots of questions I had in my own mind about how to model this little battle within a battle.

Thank you to Bob, Steve M, Ian and Si for being great play test guinea-pigs for the day. The good humour and gaming experience they brought to the table made this a very interesting and exciting game to play through and has contributed hugely to the fine tuning of this scenario.

Also thanks to all those who stopped by the table and said hello during the game. I was able to renew several old friendships during the day and look forward to welcoming new attendees to future DWG meetings.

Thanks also to the Exmouth Wargamers for another well organised Legionary Show which is a real highlight in the calendar for our neck of the woods.
Posted by carojon at 14:46