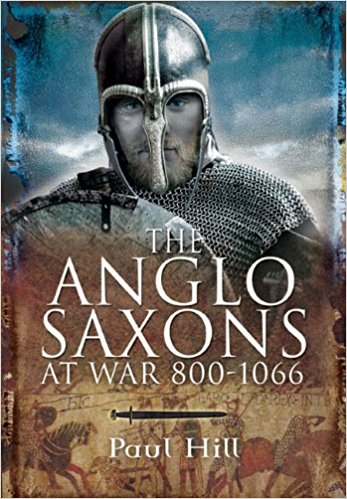 It was back at the beginning of April that regular JJ's follower Adam dropped me a comment following the post about Wallingford in Oxfordshire and its history as one of Alfred the Great's burghs.

In his comment he recommended "The Anglo-Saxons at War" by Paul Hill as a really good read on the subject and having just got back from a pleasant week away in southern Spain where I enjoyed plenty of time to read it from cover to cover I thought I would share my thoughts.

Firstly, 'spoiler alert', thank you Adam, I really enjoyed this book. As the title implies, anyone with an interest in the period of Anglo-Saxon warfare will find loads of stuff in here covering the historical record, principally the Anglo-Saxon Chronicle, but bringing in other source material such as the Old Norse Sagas amongst others and the latest interpretation and thoughts of scholars with the updated information that archaeological finds add to the debate.

Paul Hill has managed to produce a really comprehensive study of the subject despite the huge gaps in our knowledge of how armies fought their battles during this period and I found myself conjuring up plenty of potential wargaming scenarios based around the examples of battles, campaigns, subterfuge and the characters described in the text.

One aspect I found particularly interesting was the chapter focused on the early Anglo-Saxon fleet particularly under Alfred but also its later development as an English fleet that became the envy of other European Kings in the power it projected and its ability to deter raiders before they had landed.

My home town of Exmouth even got a mention as the Exe estuary is potentially the site of the first run out of Alfred's new design of ship that took on a Viking raiding group, taking out two of the three Viking boats that tried to escape but then getting several boats stranded on the sand bars which forced a hand to hand battle with the Vikings still beached in the estuary leaving heavy casualties on both sides but sending a clear message to raiders that a new maritime force was up and running.

The progression of Alfred's changing approach to warfare following the attritional battles fought with Guthrum and the great heathen army to the defence in depth strategy he later adopted is a very interesting read, as was the campaigns and progression of that strategy leading to the creation of an English kingdom under his son Edward and daughter Aelthelflaed, Queen of Mercia, as they took and consolidated their hold on the Danelaw areas of East Anglia, the Midlands and the North.

There is a very interesting section looking at the evidence or lack for the use of cavalry by the Anglo-Saxons, with some references to mounted attacks, but possibly referring to pursuit after battle rather than full on charges against formed troops. The balance of the sources would suggest certainly a mounted infantry potential.

The weapons, armour and accessories also get a very good analysis taking into consideration the contemporary accounts of their use and effects together with the findings from the many re-enactment groups who bring a 'hands on' assessment that all adds to a growing picture of our understanding.

So the structure of the book is based around six chapters all broken down into logical subsections;

Chapter 1. Warfare, Violence and Society
Why Go to War?
Where Were Wars Fought?
The Training of the Anglo-Saxon Warrior
Injury, Death and Exile - the Personal Impact of War
Feuding
Hostages, Oaths, Treaties and Treachery

Chapter 2. Military Organisation
Recruitment and Obligation
The Size and Structure of Armies
Heriots
Logistics and Communications
The Question of Cavalry
Tributes, Gelds and Mercenaries
Naval Warfare

Chapter 3. Strategy and Tactics
Ravaging, Harrying and the Use of the Landscape
Descriptions of the Armies in Action
Stratagems and Ruses

The six chapters are preceded by a Preface, Prologue and Introduction covering a survey of the evidence supporting the work.

A final section, entitled 'Conclusion' summarises the six chapters in an overall assessment of the period and the journey to a centralisation of power in an English King that created the English nation that would become in 1066 an Anglo-Norman power rather than purely Anglo-Saxon.

The book is completed with a three page appendix listing the rulers of the English from 871 to 1066, five page bibliography section and an eight page index.

The text is further supported by twenty plates depicting views of battle sites, weapons and equipment and the Viking burial pit uncovered at Weymouth in 2009, together with illustrations from the Bayeux Tapestry and other similar depictions to illustrate the look of Anglo-Saxon warriors and their weapons through this period.

Finally there is a good selection of six maps illustrating where key points in the text were referenced along with three tables covering a list of where key battles were fought, Anglo-Saxon heriots under King Cnut 1020-23 to Spear types in later Anglo-Saxon England.

From Prologue to Index there are 211 pages and the book is published by Pen & Sword at a list price of £19.99

As I have mentioned in previous posts, my battlefield touring and wider reading is all about informing my hobby and seeking to capture that knowledge in the games I play. The Anglo-Saxons at War, really epitomises the kind of book I like in particular, with a great focus on academic knowledge interwoven with informed comment and analysis that allows me to think about the various dark ages/early middle ages games I have played and whether they reflect the period well, together with buckets of information that equally inform any campaigns planned in future. If you are interested in this period of warfare then I think you will be pleased to have this book as a reference.