The Spanish 5th Infantry Division of the Army of Estremadura was probably the best of the infantry in the army with its four regular infantry battalions, two marine battalions and a battalion of provincial militia.

The quality of the Spanish units earned the division the title of the Reserve Division and it would play an important role in the upcoming French final attack helping to prevent any serious attempt to turn the Allied left flank in the northern valley.

The completion of the Spanish 5th Infantry Division together with General Cuesta moves the Talavera 208 project into its penultimate stage of completion as this is the last formation that was needed to be completed to model all the units that featured that hot afternoon on the 28th July 1809.

The map below illustrates the complete line of battle taking in the Spanish troops occupying Talavera itself, however the table will focus on just those units involved in the fighting which concentrates the table on the left and centre of the whole allied line. 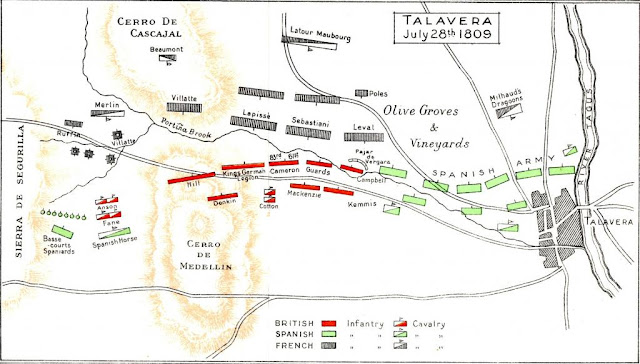 The maps that will guide the tabletop commanders have now been edited to indicate the positions of all the formations involved in this part of the battlefield together with the key victory point areas that are masked here to keep the opposing commanders 'in the dark' as to their value to each side. 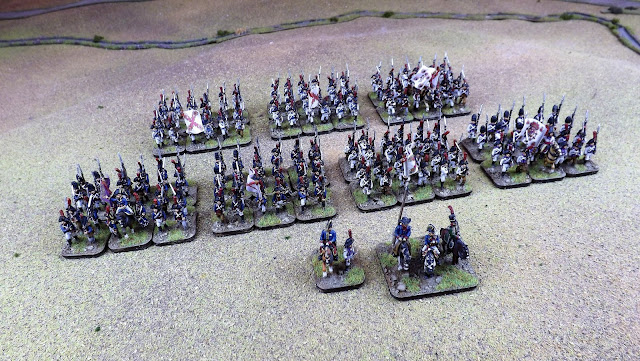 The first game is arranged to be played at the end of June and together with the new maps the players have had their briefings to allow some pre-game preparations before the big day.

As with other formation parade posts, I have linked above all the individual units that were completed as part of the 5th Division to this page for future reference, should others choose to use my research as a basis for their own collections.

General Bassecourt and his aide from the senior Reina Regiment are AB figures.

The Spanish command system together with the quality of their troops and generals makes them a fascinating command challenge for most sets of Napoleonic rules and no less using Carnage & Glory.

General Bassecourt is a divisional general only because the Spanish did not use an official brigade structure. Thus Bassecourt's stand is as a French of British brigade commander, but I add a single foot aide to indicate the rather hybrid nature of the Spanish system.

The composition of the division, having mainly regular battalions makes its appearance quite different from the 3rd Spanish Division on the right flank of the British line and featured in previous posts.

I have really enjoyed researching and constructing the Spanish for this action and feel they add a great deal of colour and individuality to any Peninsular War table.

My General Cuesta command group is based on the excellent illustration by Graham Turner in the Osprey Campaign 'Talavera 1809', showing the General meeting with Sir Arthur Wellesley during the pre-battle manoeuvres. 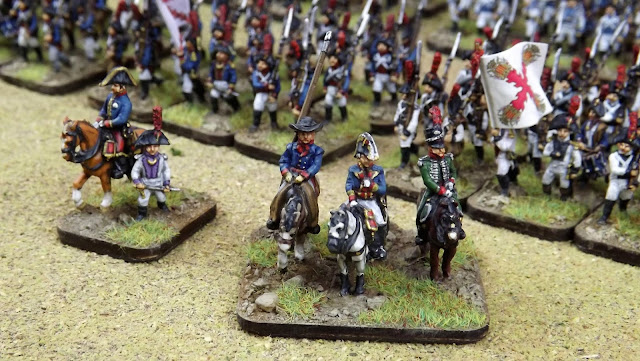 I know that Cuesta is reported to have been wheeled around the battlefield on a mule drawn carriage but I have chosen to keep my senior Spanish commander on horse back to allow his inclusion in future Spanish actions as another of his colleagues when the need arises. 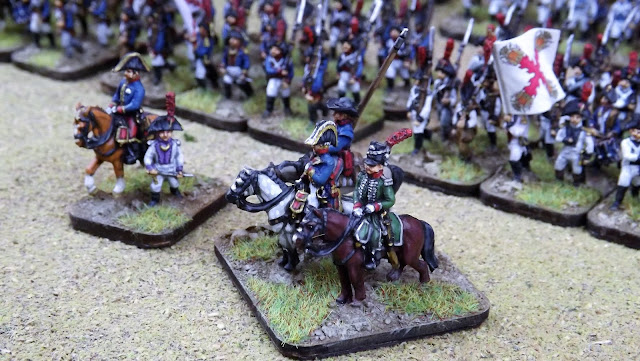 The generic approach to modelling Cuesta means that I have given him a Cazadore a Caballo, ADC officer together with a volunteer lancer escort to complete the look. 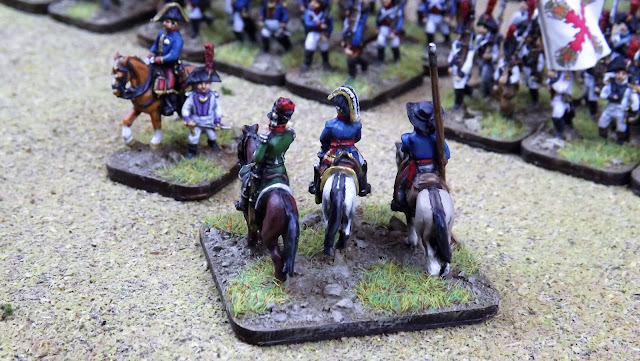 Thanks to the copious amount of coverage the Spanish general gets in British accounts of the campaign Cuesta appears to be a rather awkward obstinate and proud chap for the much younger Sir Arthur Wellesley to deal with.

In fact the only reason that the two allied armies ended up fighting a defensive battle in the first place was down to a fit of abject obstinacy only a few days prior to the battle when Cuesta refused to attack with the British on the day agreed because he felt his troops were  too tired.

The Spanish general then pursued Victor's I Corps towards Toledo only to beat a hasty retreat back to Talavera and Wellesley's army, pursued by Victor, Sebastiani and King Joseph's Madrid Reserve. 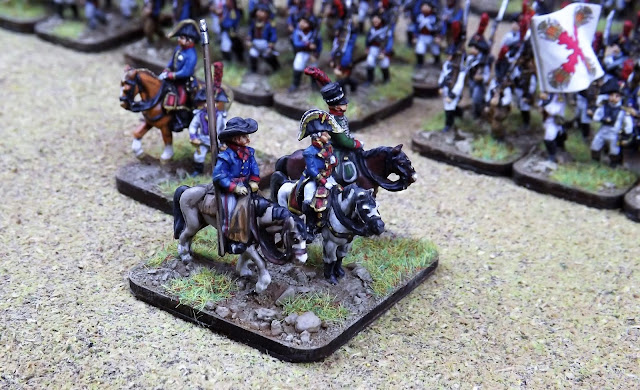 Of course Cuesta's behaviour can be partly explained by the manoeuvring going on among the higher echelons of the Spanish General officers and the Supreme Junta as characters vied with each other for supreme command of Spanish forces. Cuesta was in the running for this command and his suspicion and dislike of Wellesley could only have been piqued when he heard a rumour that the British General was being put forward as a potential Allied Supreme Commander.

Interestingly Cuesta's finest hour at Talavera was probably in between the hours of 12.00 to 13.30 just prior to the afternoon French attack when he agreed to Wellesley's request for Spanish support in the northern valley, surprising the British general by not only sending the Spanish Reserve Infantry Division under Bassecourt but also the 2nd Cavalry Division under Albuqueque together with seven Spanish guns, including three 12lbrs.
Posted by carojon at 01:25