The Army of Estremadura at Talavera 1809

As I am about to start work on the Spanish forces at Talavera, I thought it would be fun to take a look at the Spanish army of this period and the time leading up to it.

When looking at modelling the Spanish forces, the time period can be quite informative as the Spanish uniform, if it could be called that, was in a massive state of flux with the problems caused by the destruction of bases and magazines and the means to keep an army supplied with arms. ammunition and food, let alone uniforms.

The state of dress for the Spanish seems to go through three loosely defined periods, with the early war (1808-09) seeing the period when the original Bourbon Royal uniform could be seen on the battlefield, together with some more exotic examples of, very often, French inspired dress. The mid war (1810-11) when the remnants of Bourbon uniform became mixed with French and British uniforms together with traditional peasant clothes that the recruits turned up in; and the late war period (1812-14) starts to see the impact of British supplies with units able to adopt a more uniform appearance, and with the French bell topped shako look still popular with some.

I use the term "loosely" because the ability to identify the dress of specific units at specific times is limited; and I see numerous questions on forums asking about the dress of Spanish troops at such and such period. A lot of the time we are left to best or educated guess work, and I will be working to those norms as well. In addition to the changing appearance of Spanish troops the unit organisations would also see change, with British and French systems being adopted with a similar level of variability.

With the popular uprising against the French in Madrid on the 2nd of May 1808, the French found themselves with too few troops to control and hold the whole country. In the turbulent months that followed, with the collapse of the Spanish government, many regional junta's were formed in areas free of French occupation.

With the eviction of French forces from Madrid later that year, the Central or Supreme Junta was formed to coordinate the fight against the French. Initially it enjoyed the confidence and cooperation from the provincial juntas, but the reoccupation of Madrid by Napoleon forced it to flee to Seville and from there it failed to fully exert its previous authority over the others.

With little central control each junta started to raise an army to fight the French which, when combined with the lack of coordination and the petty regional jealousies, often led these early attempts at resistance to regular defeat. However these ad hoc Spanish forces, though defeated and dispersed into the many mountain ranges in Spain, never capitulated and quickly and enthusiastically rallied around the hard core of regulars; with other conscripts and volunteers quickly replacing those lost to the enemy or who joined the guerrilla bands.

This resilience to defeat and a determination to take the war to the French convinced the British government to act in their support.

The regular Spanish army had been consistently neglected in the years before 1807. Organised much like other western- European armies of the late 18th century, in 1808 it consisted of 137,000 men including 30,000 militia.

In theory line infantry regiments had three battalions of four companies, twelve companies in total, of which two were grenadiers, normally forming half the compliment of the first battalion.

The mounted regiments consisting of heavy cavalry, dragoons, cazadores and hussars, had five squadrons each and there were four regiments of artillery providing, on paper, forty artillery batteries, thirty four field and six horse.

There were forty-two regiments of provincial militia in the peninsula, each of one battalion, with one regiment of two battalions in Mallorca and a battalion in the Canary Islands. In theory from 1805 these units dressed as the line regiments in white with red facings, but there are references to many units being dressed in the more common brown cloth instead

With all the defeats suffered in 1808, the regular army's organisation collapsed, with new units spontaneously appearing all over Spain, Spanish forces became a mixture of pre 1808 dressed units in their white uniforms, but with brown and blue becoming more common.

The Army of Estremadura that fought at Talavera was made up of troops from four sources. The first group came from the army that was thoroughly beaten at the battle of Gamonal near Burgos in November 1808 as part of Napoleon's personally led invasion campaign.

The second part came from the remains of the small army led by General San Juan, that had vainly attempted to prevent Napoleon's march on Madrid at Somisierra, the General being lynched for suspected treason by his routing army.

Thirdly, there were hastily raised, poorly trained and equipped levies, and finally four regular dismounted cavalry regiments sent to the area to procure horses and equipment.

In time I aim to put the whole army together, but initially I propose to start with units that played a significant role in the Battle of Talavera. I have put together an order of battle with notes on the units, with a particular focus on, in bold, the units I will model first. My notes determine what the unit is, which will generally define the look of the unit with, line infantry in Bourbon pre 1808 uniform, light infantry in the pre 1808 blue uniform illustrated above, etc My first battalion of line infantry will have half the battalion as grenadiers to represent the regimental grenadier component. For more information on the look of these units follow the link at the bottom for a PDF of information.

The two divisions, 3rd and 5th, will show the look of most of the infantry and the selected cavalry units will do their bit to add plenty of colour to my allied army and include the more active components of the Spanish forces at Talavera. 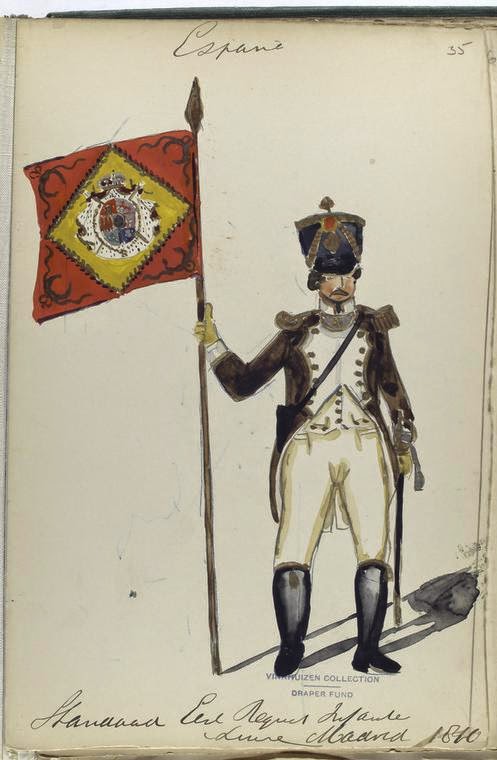 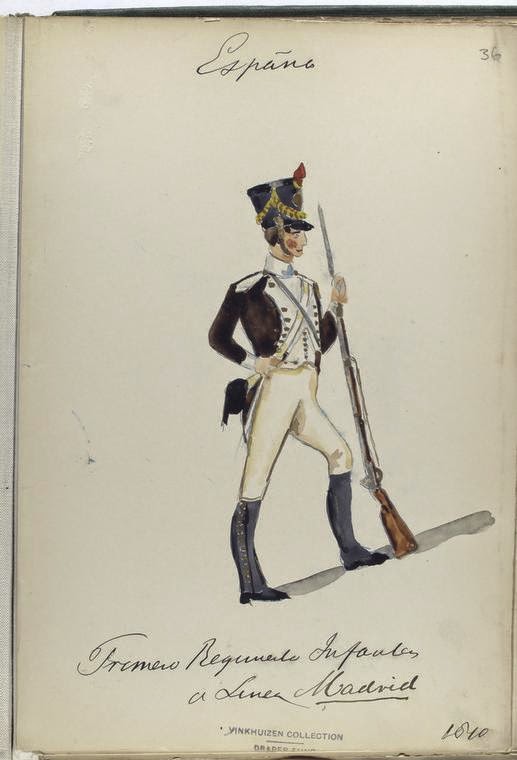 Standard Bearer and Fusilier of the 2nd Volunteers of Madrid.
I am going to have to get that Colour made to order

The Spanish army of the Napoleonic period poses a lot of challenges to the wargamer looking to capture the look of these troops, and we are often forced to make decisions based on incomplete information. That together with the overall poor battle performance probably puts some off from playing them.

Personally I think they are a fantastic looking army with the variety and mixture of dress adding to the feast for the eyes. The performance and rating of the troops makes playing them well, a real challenge to wargame, but again I think that adds to the attraction. Some Spanish units performed extraordinarily well and occasionally their armies were able to defeat French armies in open battle. Part of the attraction for me will be to randomise the quality of these troops so you are never sure which Spanish army has turned up, and I can't wait to have them out on the table.

There are more sources than ever available about the Spanish armies of this period. My own list is not exhaustive and a simple search on the net will reveal plenty of others.

The following is not my information and I can't find the blog to attribute it to, so I have put it on a PDF for others to use and I've added illustrations from my own research. If you know who put this together let me know and I will attribute it appropriately.

Painting the Spanish Order of Battle at Talavera
https://drive.google.com/open?id=0B4uf_cuQyI3rM2pLWjlucXNfSDg

Next up the 1st Battalion Badajoz Infantry Regiment.
Posted by carojon at 06:15