With lots of building work going on here at Chez JJ, my photographing of new models added to existing and new collections has been put on hold as rooms used for taking pictures have been used to store furniture during the work.

However, whilst concentrating on posting about this year's major holiday that enabled me to get to see some very important battle sites that featured in the Peninsular War, the painting work has continued and with a break in house building projects, I have several new units to post about having grabbed back my room for taking the required pictures in.

A few years ago I decided to renew my love affair with the American War of Independence but in 28mm rather than 15mm which was how I gamed it in previous times.

In 2017, I dipped my toe in the water with my planned scale of collection when I put together a few figures as part of a club Christmas game where traditionally members are encouraged to produce some figures to add to the game, and you can see my efforts putting together some Continentals and riflemen in the link below


The AWI is a curious horse & musket era in that the war was characterised early on with some significantly sized battles culminating in the 'biggies' of Brandywine and Monmouth; but, as the war fell into a conflict of attrition, with British forces drawn away to other theatres, with the conflict taking on a global perspective as other European powers attempted to take advantage of British woes, it soon became a war of who could last the longest with smaller battles and actions becoming a common feature of the latter part of the conflict.

I have always preferred the 'big battle' game but I find myself, with the AWI, equally drawn to the smaller actions, and finding a way to straddle the two types of games has caused me to think long and hard about how to put my collection together to potentially facilitate both.

With the advent of rules such as Sharp Practice, Muskets and Tomahawks and recently Rebels and Patriots, the lower level large skirmish/small battle player is spoilt for choice, and the larger scale collection looks so nice with these kind of games where characterful figures really add to the narrative nature these games produce.

Thus it was, I decided to initially concentrate on putting together a collection pitched specifically at this lower level game, which caused me to look at building the collection around a very specific theatre within the wider war, with a mind to add to the collection gradually, with other troop types, theatre specific dress and other options to enable bigger games in future; well that's the plan!.

It seems that many others looking to do something similar have headed for the South with its great mix of infantry and cavalry together with an eclectic selection of troop types from across the gamete available to both sides.

Tempting though the southern conflict is, I have harboured a long standing interest in the conflict that raged around the northern frontier in the great river valleys along the Canadian border such as the Hudson and Mohawk rivers that saw an equally bitter contest between loyalists and rebels, with the added fighting capabilities of the native Americans, mainly but not totally, in support of the Crown.


The region after the campaign of 1777 by Sir John Burgoyne was primarily garrisoned by militia and state levies overseen by a command based in Albany, with very little main Continental Army involvement outside of the expedition of 1779 by General John Sullivan, leading 4,000 troops to eradicate the Mohawk Indian population by destroying their villages after a series of Indian raids in the area had caused outrage and dismay at the highest level.

The campaign by Sullivan only poured fuel on the fire by failing to break the military power of the Six Nations who would return from the Canadian border where they took refuge among the British forts to join the campaigns of Johnson and Butler in the following years.

The American militia forces were able to move quickly with a familiarity of the terrain and fighting skills to match the irregular style of warfare often required, relying on numbers to compensate for any lack of quality in the few open field battles and forts to provide rallying positions and strongpoints for civilians to be able to take shelter; conversely the British and Provincial forces were small in comparison to that available in other parts of America with the few British regulars and Provincials split into small groups to stiffen the capabilities of the irregular forces, equally able to make good use of the field skills of the Indians and loyalists and their familiarity with the region.

My interest in this region was first drawn when travelling in the area many years ago on our honeymoon to Canada and the US and reading about the history as we travelled up from New York, via Boston, Quebec, Montreal, Niagara, Buffalo and then back to New York via Gettysburg and Washington. 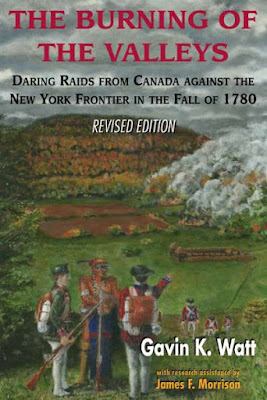 My reading of the conflict gathered further inspiration when I picked up a first edition copy of 'The Burning of the Valleys' by Gavin K. Watt a founding member of the reenactment group set up to portray Sir John Johnson's Regiment, The King's Royal Regiment of New York, known as Johnson's Greens when, in their first incarnation, the regiment was clothed as other provincial regiments in green regimentals with white facings.


As the book's title suggest, the content is very much focused on a series of raids in the area of the Mohawk valley that saw Sir John together with Lieutenant Colonel John Butler, he of Butler's Rangers fame, Joseph Brant, Mohawk War Chief and Captain in the Six Nations Indian Department and others march into the northern areas of New York state burning crops and destroying homes in an effort to disrupt the food supplies and production generated in the region that helped feed the Continental Army and civilian population alike.

As well as the military objectives, the war also had a very personal element to it with displaced loyalists and Mohawk Indians highly motivated in taking out revenge against those they blamed for their plight, with the feelings often mutual from rebels simply looking to defend their homes and families whilst caught up in a wider conflict and the demands of the military high command.


Just the sort of theatre of operations that would seem to work particularly well with a rule set like Sharp Practice able to include the local dynamics alongside the military objectives and with plenty of scope to generate small actions amid the raiding, spy missions and other low level military actions that typified the conflict in the area.

So to have a slight break from painting Romans and Dacians, I embarked on building the new collection with units for the 1780 campaign which sees here my first groups of KRRNY hat men in their new look red faced blue regimentals, wide brimmed hats and cut down jackets. 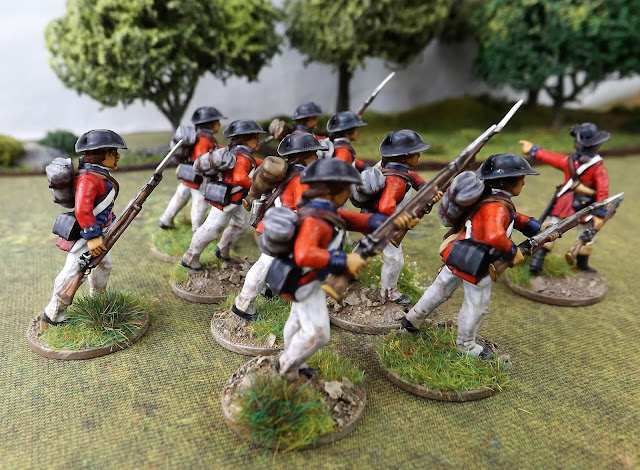 These are the Perry range of British plastic infantry and will form part of the core of my British-Provincial force set to go raiding along the Mohawk.

The other ideal part of building a collection for this theatre, in the AWI, is that most of my new 28mm terrain items will work just as well creating an upstate New York wilderness and countryside as it does representing first century Dacia, once I get some American frontier houses, barns and fencing added to it, together with some fields of crops to make suitable targets for raiders. 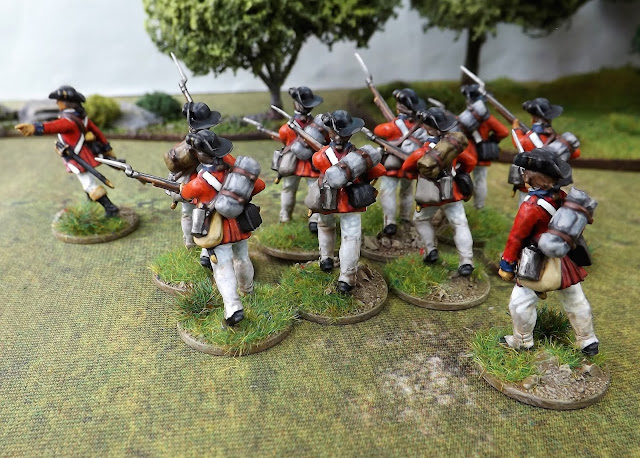 The one figure in these group shots that I am not entirely content with is the drummer in 1768 Royal Warrant dress regulation bearskin behind the line of company groups, which is not correct for this unit and will be replaced with a broad brimmed hat option going forward, with my bearskin drummer better suited for the 8th Foot that often operated together with Sir John's forces.

The collection will be using mainly Perry's Miniatures which are a delight to work with in the detail and character the figures display and I will supplement them with a few additions from the Warlord plastics offerings to add a bit of variety and to include a few scratch builds.

Hopefully as the collection grows, and with some added colour parties, I can use the intended sabot basing to allow the same figures to be used for bigger battles and more appropriate bigger battle rules. 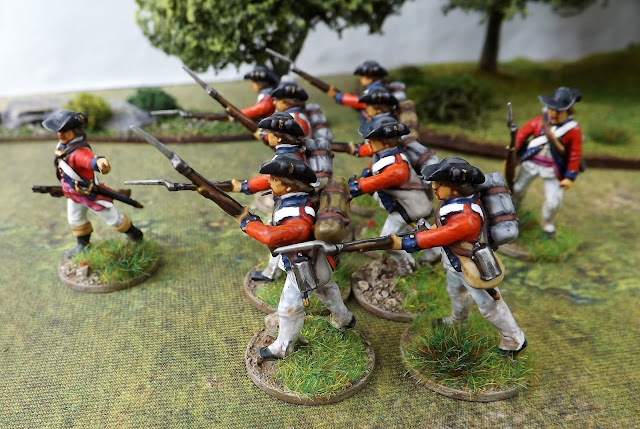 Anyway, next up will be Roman Legionaries added to the Romano-Dacian Collection and some British AWI Light Infantry, plus the Peninsular War Tour series of posts continues with a look at our visit to the fortress city of Badajoz.

In addition I'm off to Colours in Newbury this weekend so hope to get a post up about the show and next weekend the DWG is hosting Clotted Lard so I'll be posting on the club blog about another great day of Lardy games.