All at Sea - Another Project 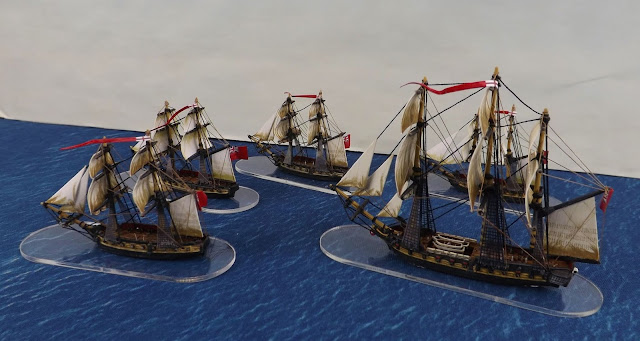 It was back in April this year that I reported on my visit to Salute and was able to show pictures of the then, next big thing from Warlord Games, namely Black Seas which was being shown for the first time along with some of the models and mock ups for the gaming materials which have now become familiar with more of us, following the launch of the game system this year.

I am not usually an 'early adopter', to use the marketing speak, but following the release of the plastic sprues attached to Wargames Illustrated, my imagination was captured by the detail on these models and with extra Brigs donated by Steve M, I set about putting these and the frigate together as a British light squadron. 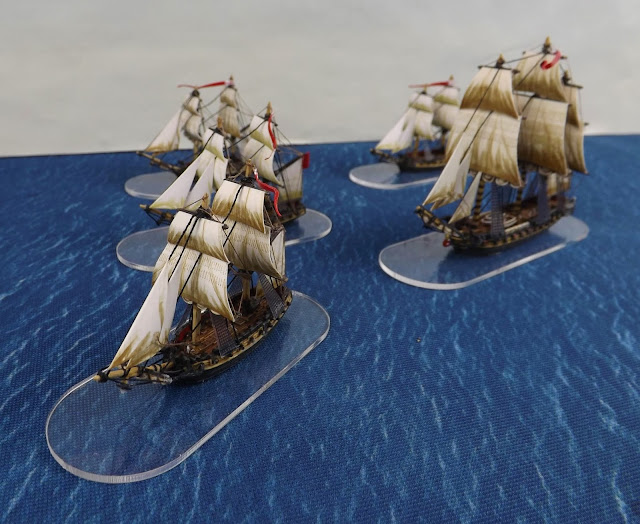 Following this initial build I have discovered how well these models look and the possibilities to add extra detail, with crew figures and running rigging which really adds to the overall look.

The fun I have had putting them together, inspired me to order up the US frigate and three of the plastic 74's which are on the paint desk as I write and I am looking forward to adding to the collection in time.

The models are very straight forward to put together, and there are plenty of YouTube videos out there illustrating this. I myself have found that painting the hull and the masts separately allows an easier painting process with both, afterwards bringing them together with the paint job completed, and ready to move on to rigging. 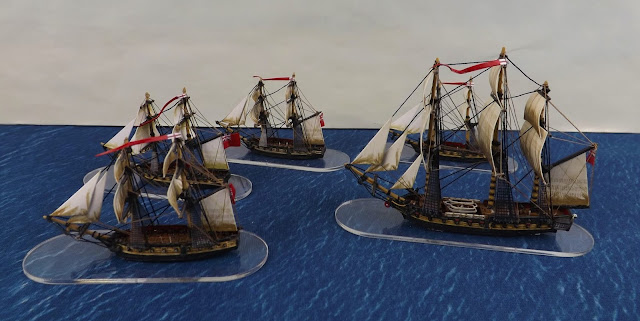 The rigging is very straight forward, more so in my experience than working with the 1:1200 Langton models, with the standing rigging being attached followed by the acetate ratlines, and then the running rigging to finish.

The ratlines are not a perfect fit for the masts and sails and require a bit of work, and superglue does tend to cause them to mist when fixing them to hull and masts. I notice some modelers are turning to various etched options, but they add to the cost of what is for me a wargaming model and not something I intend putting on my mantelpiece for show, thus the acetate option makes an sturdy robust model better able to stand handling.

Another slight issue is the thickness of paper the naval ensigns are supplied on, making folding a little more problematic and needing a good paint job on the edges to make any unsightly seem less offending to the eye. 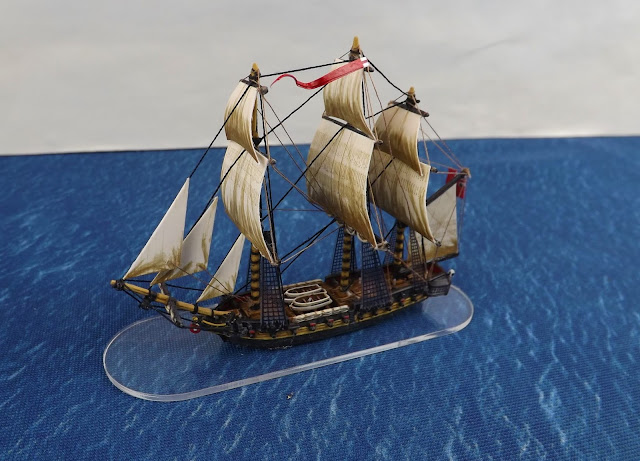 The next question for me was basing, which I always intended to do, as I want the model to take most handling on the base rather than the model itself, thus I have sized the bases to extend the length of the hull and the projecting bowsprit.

I decided to move away from the textured rectangular base common to a lot of naval wargamers models, which I find hard on the eye when seen on a sea table, and so opted for the clear acrylic pill, or 'stadium' bases you see on my modes, supplied by a great company,  Fluid 3D Workshop ,who will cut these and other shapes to specific dimensions for gamers.

The clear style of base allows my Tiny Wargames sea mat to show through around my ship models in all its glory and the round edges seem a lot more subtle to my way of thinking. You could add ship names and other data to them, and I will probably fix labels in a temporary and sparing fashion as needed. 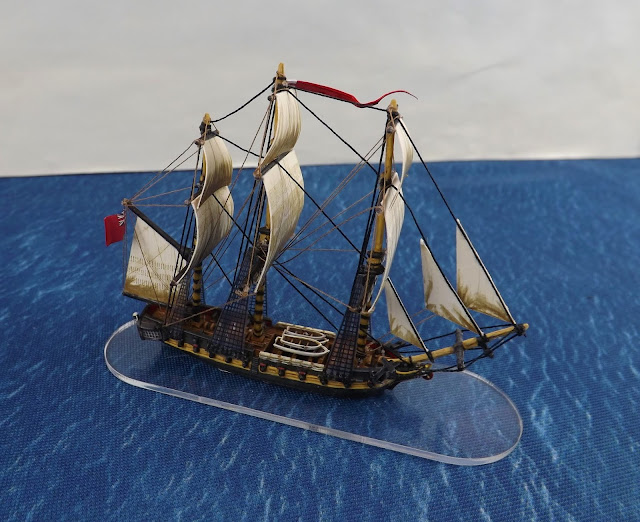 I really love the lines of the 38-gun frigate and am looking forward to getting her on the table up against the American Super-Frigate, Constitution which contrasts sharply, being almost the same length as the 74-gun ships.

Likewise the model brigs are very nicely done and offer lots of opportunity for scratch building to personalise them or convert them into another small class of warship or small merchantman. 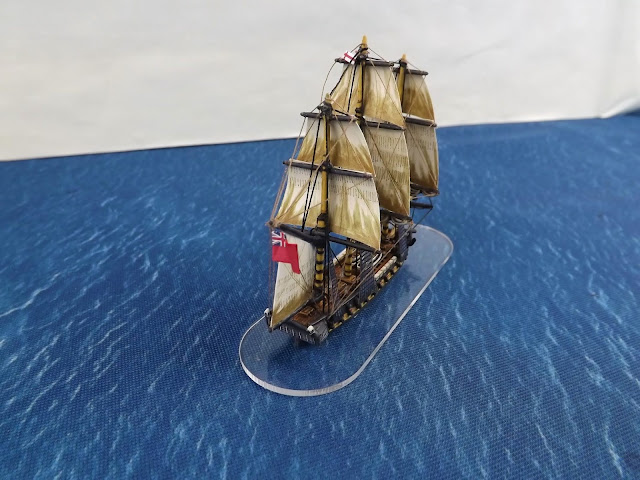 So the next issue for me was the rules to use as I came at Black Seas rules with a lot of reservations about them, based on what I had seen from Warlord for other periods.

As I suspected 'Black Seas' is not for me, and I find the wake markers and counters grating to the eye, and so I looked around for other alternatives. In the end, after a lot of thought and sleeping on ideas, I have settled for using 'Kiss me Hardy' (KMH) from the Lardies which seem to have been scaled to about 1:900 which should allow the use of these models, 1:700, without the need to mess about with the movement and gunnery ranges.

Having played KMH quite a few times and with all my card decks sorted out, the rules will allow a fun game with these models for either small or single ship actions right through to bigger battle set ups and my 9 x 5 foot table should allow plenty of scope.

If the collection develops to allow even bigger set piece battles to be modelled then with these bases I can move to a fleet action set of rules such as Grand Fleet Actions. 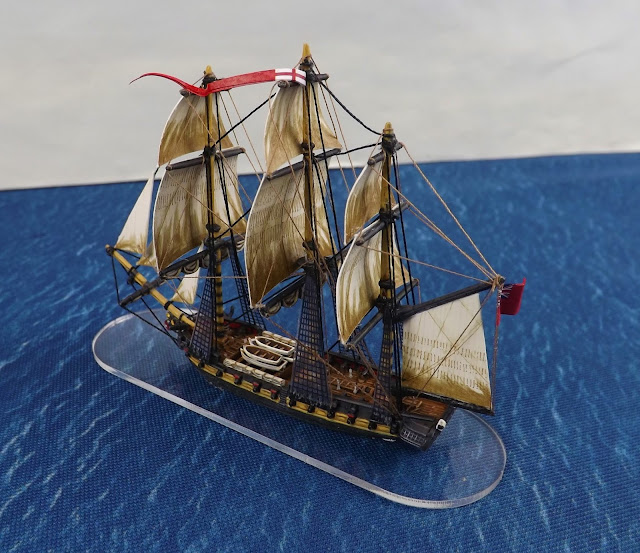 I noticed a comment recently on a certain forum by another naval gamer that this range would not be featuring on his table, extolling the virtues of a great range of paper ships from War Artisan, that I have featured on this blog and am only too familiar with how good they look and at a fraction of the cost of other options, including these.

That said, I don't think you can argue with the look of these models, and with multiple ships on the table, fully rigged, with gun flashing smoke markers between models, the look of a naval battle will only be enhanced, which is perhaps the biggest issue with naval wargaming, namely the look of the table.

Warlord Games are to be congratulated for making available a larger scale Age of Sail set of models that are not toy looking pirate models but capture the look of the historical vessels they portray, and fulfill the promise of the Meridian range launched by Skytrex all those years ago of larger scale, accurate models, but affordable for building a wargame collection. 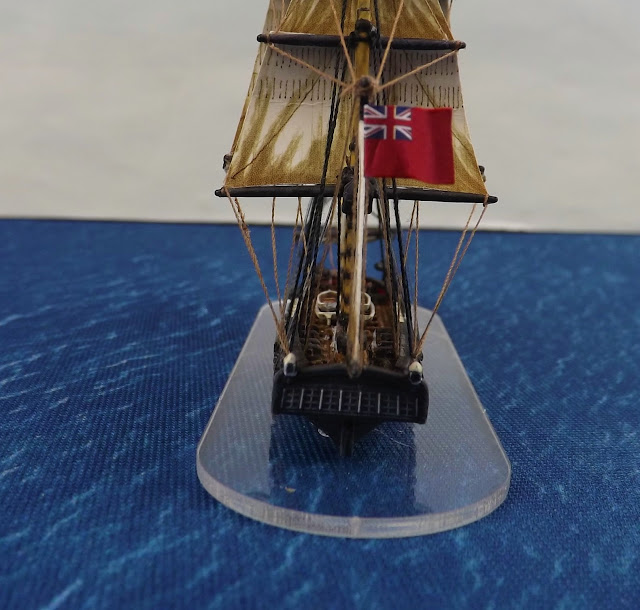 Finally the other consideration for extending this collection was what period to model. In the past, using the Langton models, I opted for the American War of Independence and specifically a collection themed around Admirals Suffren and Hughes and their series of battles fought in the Indian Ocean in the 1780's. 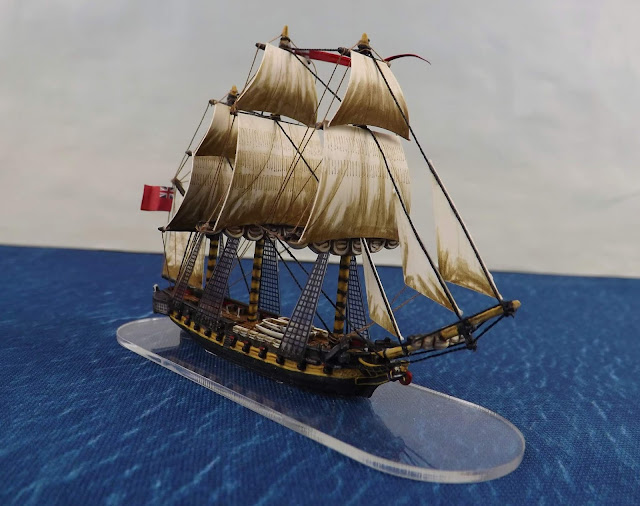 This time I wanted to do something different and am rather interested in the struggle between the British and French in the Caribbean from 1793 to 1801 during the Revolutionary War which saw Spain ally with the French towards the latter part of that period. 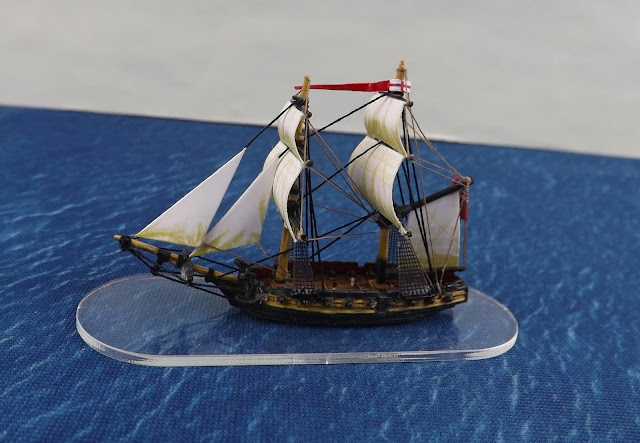 The theatre offers plenty of opportunity for relatively manageable sized actions and plenty of single ship clashes when you include the hunting down of privateers.

However the ensigns carried during this period by the French and British change as the war reactivates in 1803 as the Napoleonic struggle and the later 1812 War against the USA and, as I would also like to be able to cover some of those actions, I am settling on modeling my ships for the later period as delivered in the box. 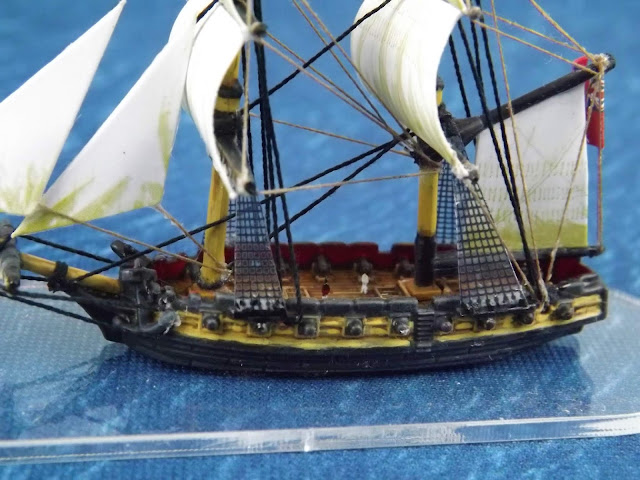 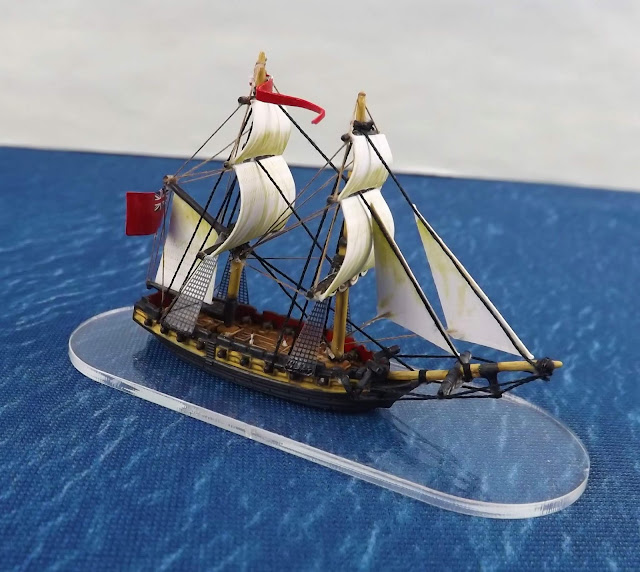 Warlord look set to add to this range of models and if the response and interest to them is anything to go by, they look to have come up with a model range that will pay them back handsomely for expanding it, and so I hope they will add merchantmen, a smaller third rate 74/64 -gun SOL together with a 4th rate 50-gun a French 40-gun frigate and perhaps a 22/24-gun three masted corvette or sloop-of-war. 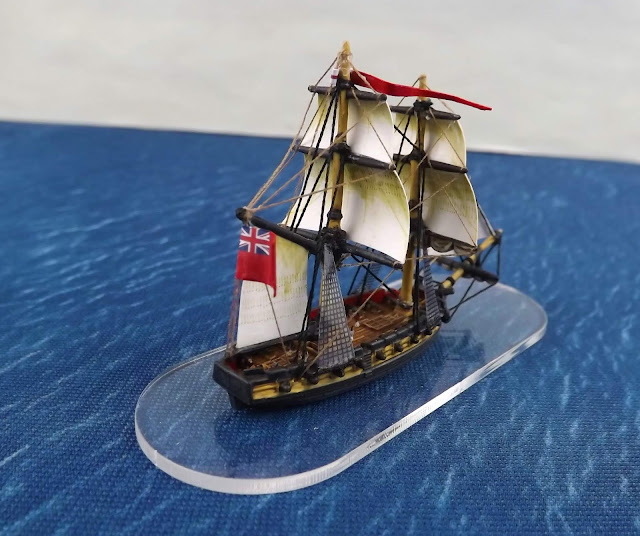 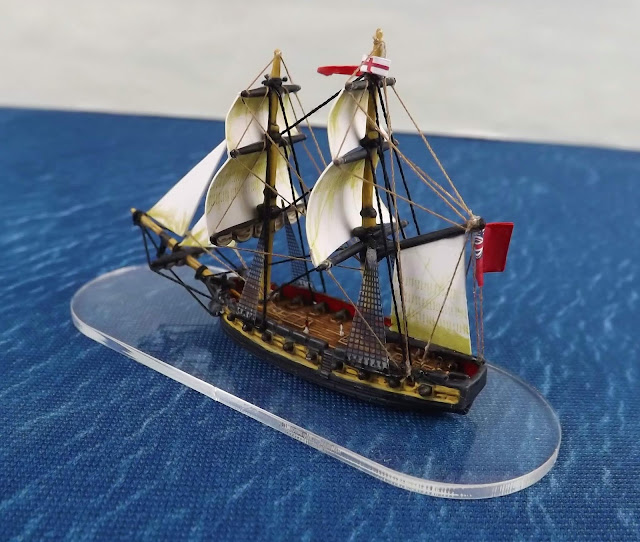 There is something really nice about sitting down to rig an age of sail model and I really enjoyed the fact that Warlord have included aspects such as different figureheads and stern-quarters to really personalise each ship and create something unique each time, as well as offering models of specific historic ships from the period, such as Victory, L'Orient etc. 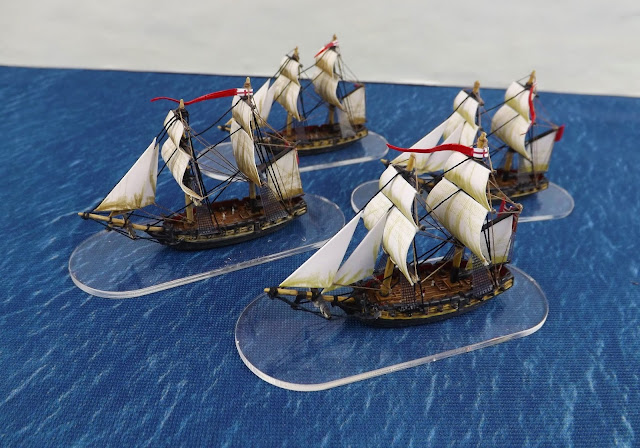 The fun has caused me to return to the loft and dig out my rather large collection of books on the subject and start reacquainting myself with the history as well as conjuring with ideas for campaigns and future big battles. 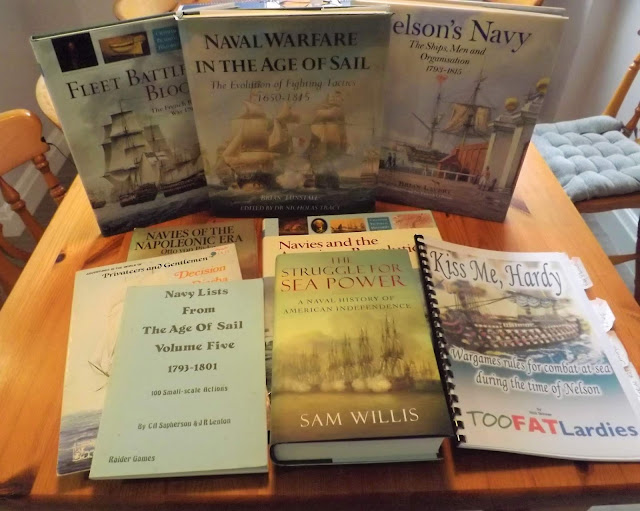 In summary, the models are from Warlord Games, part of their Black Seas range of ship models, the bases from Fluid 3D Workshop and the sea mat from Tiny Wargames.

I look forward to showing you more models from the range going forward.
Posted by carojon at 02:36