All at Sea - On the Stocks in JJ's Dockyard, New French Builds, Part Two 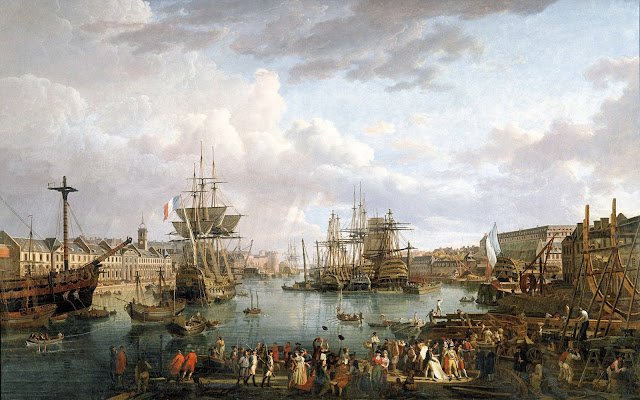 The ship yard in JJ's Royal Docks have been extremely busy in recent days with multiple launches and fittings out completed as the core of my French collection starts to take shape.

All at Sea - On the Stocks in JJ's Dockyard, New French Builds, Part One

There were still two more ships of the line awaiting the work of the riggers when I published the first part of this post, namely, my 74 gun Redoutable and my first 'first rate' of any of the warring nations, with the generic French model that comes with the box set.

Redoubtable was another of the ubiquitous Temeraire class of 74 gun third rate ships of the line designed by Jaques Sane as detailed in my first post looking at her sister ship L'Aigle. 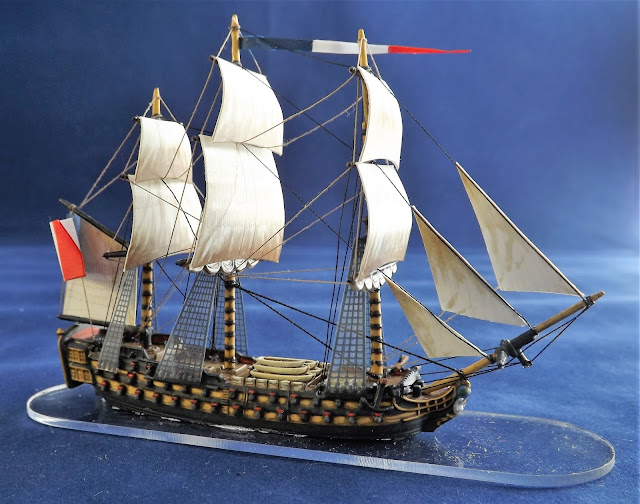 Originally named Suffren, after the great Admiral, when launched at Brest on the 31st May 1791, she was renamed Redoutable in May 1794 after the resolution of the Quiberon mutinies that broke out in the Brest Squadron in September 1793 at the height of the Reign of Terror. 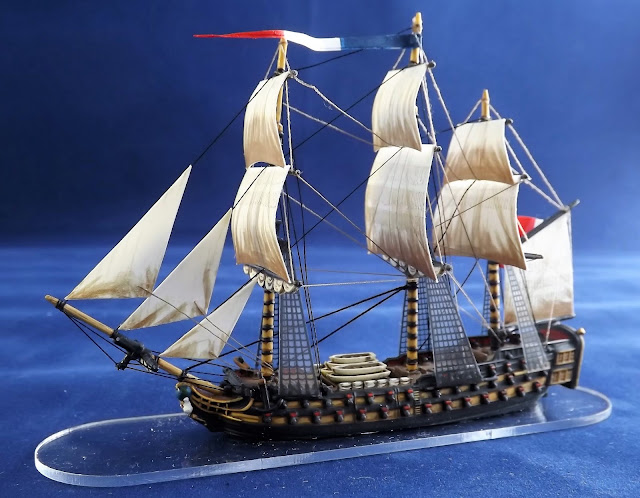 As part of the French Channel Fleet, she missed taking part in the Glorious First of June in 1794 as part of Rear Admiral Pierre Francois Cornic's attached squadron left in Brest with the departure of Admiral Villaret-Joyeuse's main fleet. 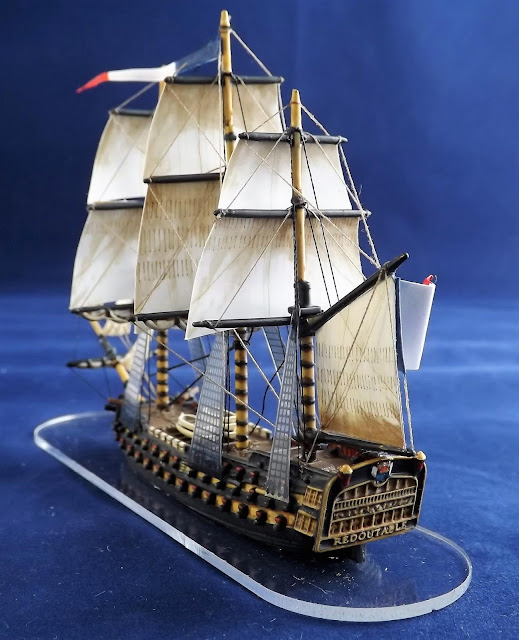 In the winter of 1794 she was part of the French fleet sent into the Bay of Biscay as part of the 'Croisiere du Grand Hiver' which resulted in no expected clash with the Royal Navy, but did see the sinking of the 110 gun Republicain which broke its anchor cable and was lost on nearby rocks, and Redoutable also losing her cables at the same time but managing to make it safely into open water.

Other ships involved also suffered a lot of damage that was difficult to repair at a time of shortages of materials and the general disorder in French ports, all this while the Royal Navy stayed in its ports and anchorages waiting out the bad winter weather.


On the 23rd June 1795 she took part in the Battle of Groix, near the island of that name, off the Brittany coast in the Bay of Biscay, when Lord Bridport, Vice Admiral Alexander Hood's fourteen ship squadron intercepted and chased Vice Admiral Villaret-Joyeuse's twelve ship squadron, and brought them to action taking three of them (Alexandre, Formidable and Tigre) with the rest of the French ships scattering and taking shelter in L'Orient before returning later to Brest.


Redoutable was the flagship of Rear Admiral Kerguelen and her poor sailing qualities saw her at one stage taken in tow by the frigate Virginie. However despite that, Redoubtable was one of the ships that responded to Villaret-Joyeuse's signal to support the hard pressed Alexandre along with Tigre and Formidable, however she was unable to prevent the loss of all three and was perhaps fortunate to have escaped with the rest of the squadron. 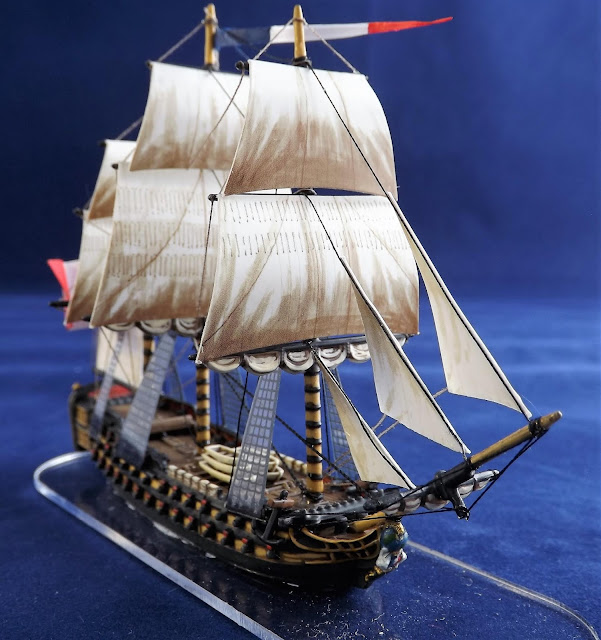 In December 1796 she was part of the force sent on another ill-fated winter expedition, this time as part of a French attempt to invade Ireland.

Taking advantage of the seasonally bad weather, the French fleet was caught by it, as it attempted to evade a British frigate squadron of observation under Sir Edward Pellew in HMS Indefatigable, and the resulting disorder ended up with the French ships scattered about the approaches to Brest before it could reassemble and make its way to Bantry Bay, arriving on the 21st December, with Redoutable being the first ship into the bay.

The bad weather and gales that followed their arrival would see ships breaking their cables and those that were not driven on shore ran for the open sea and scattered in the Western Approaches with the whole operation abandoned by the 29th December and with the first ships to return arriving at Brest on January 1st 1795 which included Redoutable. 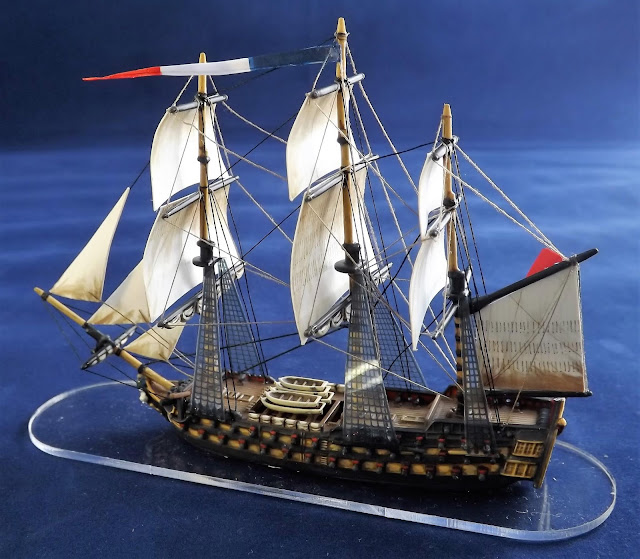 With the Peace of Amiens signed on the 25th March 1802, Redoutable became the flagship of Rear Admiral Francois Joseph Bouvet, commander of the failed invasion of Ireland in 1796, and in command of two other ships of the line and four frigates, dispatched to the Caribbean to support French forces in Guadeloupe and later Saint-Domingue but by 1804 she is recorded back in European waters at Corunna in northern Spain, with four other French 74's.


Of course Redoutable's most famous and last action would occur in October 1805 when she was engaged by HMS Victory and later HMS Temraire which helped put an end to the fierce resistance put up by the French 74 as she engaged Admiral Nelson's flagship, which would see the British Admiral lose his life to topmen aboard Redoubtable firing upon the deck of the British ship.


The action and Redoutable's part in it, is vividly captured by her captain on the day, Captain Lucas and his report can be read in the link below.

The evidence of the fierce fight put up by Redoutable is illustrated in her casualty totals showing that when Lucas finally struck, the ship had suffered 300 killed and 222 severely wounded including Lucas, out of a total ships company of 643 men.


In return Victory suffered 160 casualties and Temeraire 120, whilst the battered hull of the Redoubtable was taken in tow by HMS Swiftsure, only to see the ship founder on the 30th October as her stern collapsed leaving fifty survivors to be picked up clinging to debris after the sinking.

Captain Lucas was taken to England as a prisoner, and when released was awarded Commander of the Legion of Honour by Napoleon for his service. 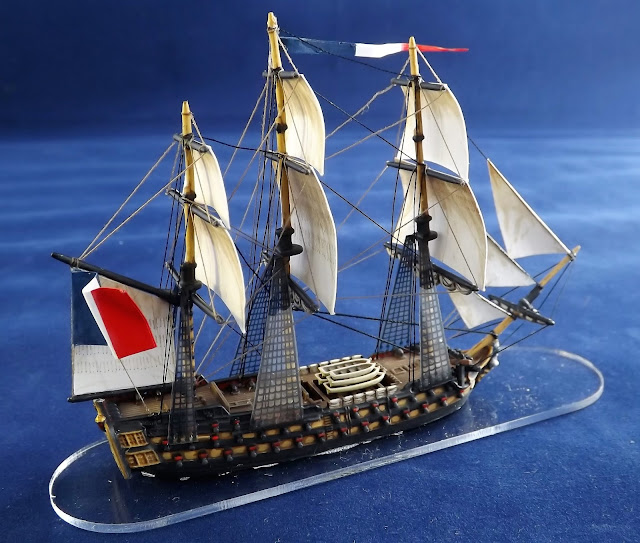 Finally, my French force has been joined by a generic first rate ship of the line of 110 plus guns.

Admiral Villaret-Joyeuse took four of this type of French first rate with him on his sortie in 1794 that resulted in the Battle of the Glorious First of June; three 110 gun ships, Republicain, formerly Royal Louis built in 1780, Revolutionaire, formerly Bretagne launched in 1766 and the Terrible launched in 1780, whilst he raised his flag in the mighty Montagne 120 guns, formerly the Ocean launched in 1790. 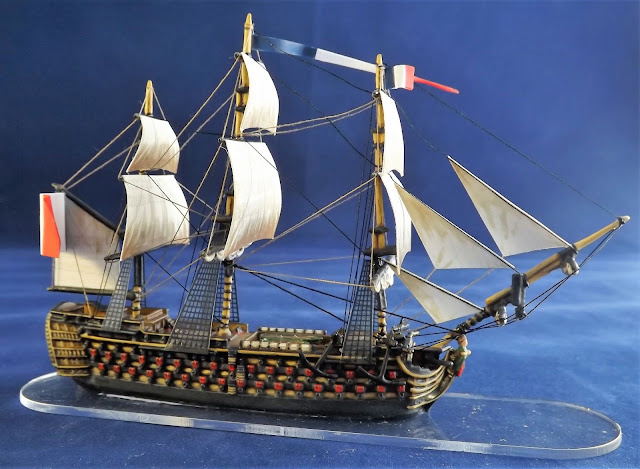 These ships were designed to act as flagships for admirals within a large fleet, providing the accommodation and facilities for a senior flag officer and his staff, as well as providing a powerful gun platform to anchor a section of the line of battle.


The potential power these large ships offered the French navy, particularly in the heady days of success during the American War, was largely undermined by the collapse of the French navy in the French Revolution with the loss of so many experienced officers and the break down in discipline and organisation that followed.

Thus it was that Revolutionaire was brought to battle early in the First of June battle as HMS Bellerophon of 74 guns, one of the faster ships in the British fleet, closed in on the tail of the French fleet attempting to avoid an engagement, but with Revolutionaire living up to her name and reportedly 'spoiling for a fight' hanging back to offer battle. 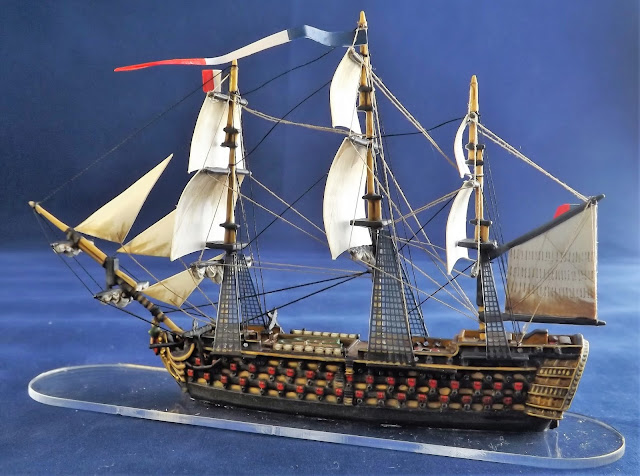 Bellerophon threw a broadside of 829 pounds to Revolutionaire's 1,212 pounds suggesting the former was well outmatched, but in a seventy minute duel with Bellerophon opening fire on the lee quarter astern of the great French ship, both of them separated with their rigging well cut up, but with Bellerophon repairing the damage to return to the line the next day, but with Revolutionaire forced to return to Brest to make repairs.

The damaged Revolutionaire would be scrapped two years later.


Reports suggesting that Bellerophon's gunnery was poor on the day and that a better result might have been expected, can probably be forgiven when considering both navies were still gearing up their crews for this new war and this was the first significant action in it.

Indeed the Bellrophon more that made up for her rusty performance four years later when she tackled the 120-gun Orient at the Battle of the Nile, with the resulting explosion aboard the French flagship, that left just seventy survivors from a reported compliment of 1,130 men and boys.


One aspect I particularly like about the Warlord Games model of this and some of the other named French ships is their depiction of the rounded stern galleries, a feature that is very typical of French and Spanish ships of the period and depicted in the contemporary picture produced by Jean Francois Hue of French warships in Brest Harbour, seen above.


As I am keen to recreate the actions of the Revolutionary War as well as the early Napoleonic period, that came later, this model is an important addition to the collection and a recreation of Bellerophon's fight with Revolutionaire is now possible.


These large French warships, carry a mighty punch and demand respect from an aggressive British player, and provide great eye-candy to any French line of battle. 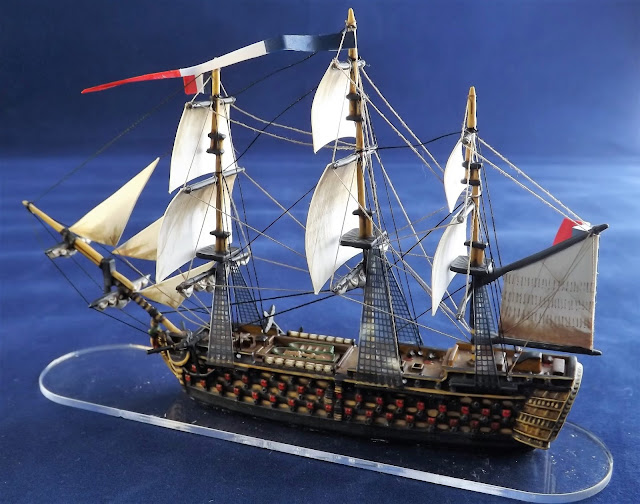 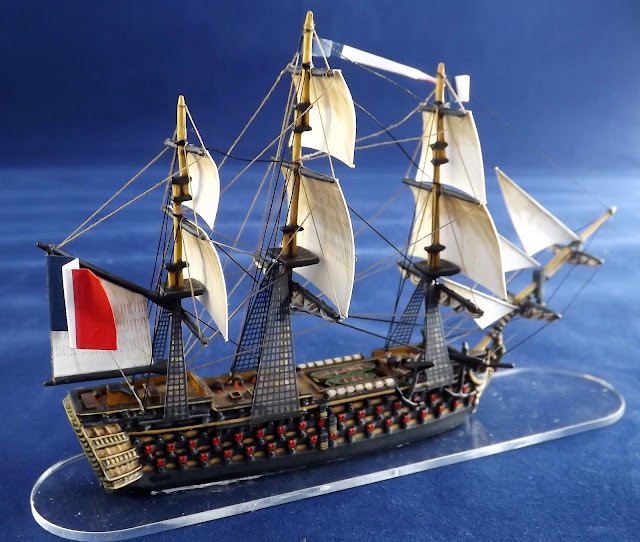 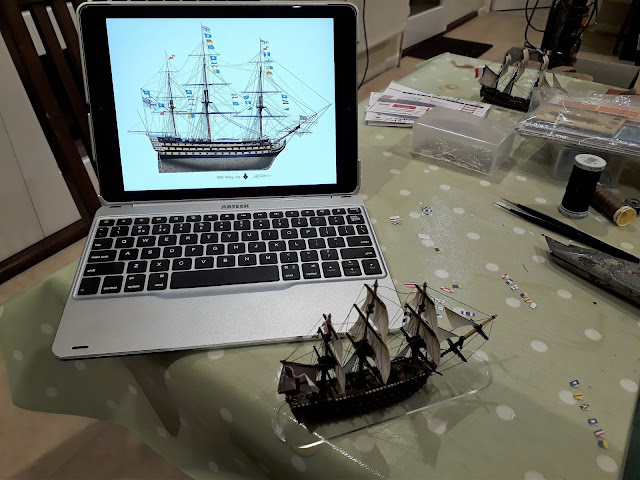 Next up the ship building work turns its attention to the Royal Navy, accompanied by a lusty rendition of 'Rule Britannia' and in particular my rendition of HMS Victory that saw me up to my eyes in signal flags on the weekend!
Posted by carojon at 01:59