All at Sea - The Leeward Line using War by Sail, Solo Game Playthrough 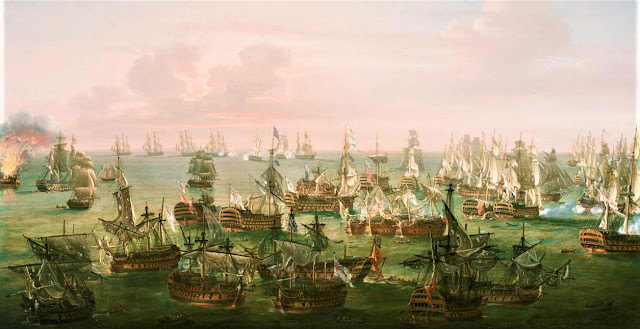 This time last year, the world was a very different place and I was looking forward to developing the 1:700th Age of Sail collection of ships and working up a set of rules and scenarios to play them with which saw me post a couple of games played with Jack, Bob and David,
JJ's Wargames - War by Sail
as we set about some single ship and later multi-ship games using War by Sail, written by Tom Jensen and available through Wargames Vault in the link below.
Like most others faced with social distancing and lockdown, my tabletop wargaming has gone on the 'backburner' as I turned my attention to the painting, modelling and reading side of this particular project, however the desire to get some toys out on the table and start to enjoy the models in the way they were created to be enjoyed became rather overwhelming and so I decided to contemplate the idea of doing some solo games to help further develop some rule ideas I have had and to have some fun fitting them around an historical scenario.
As mentioned in my JJ's Wargames - Year End Review 2020 Plan, perhaps the worst case secret ever rolled out on the blog, was the plan to finish off the current collection with a view to producing the Battle of Trafalgar as a very big game, and so it seemed to me that a Trafalgar based scenario would fit the bill perfectly for playing through some ideas I have for the larger game whilst demonstrating those ideas as well as how practical 'chit draw activation' games are as a vehicle for solo play.
Thus I have started to work my way through The Leeward Line scenario from Warlord Games as a free pdf, see link above, to play solo with some added modifications based on the detail contained in Mark Adkins - The Trafalgar Companion and put together a video compilation of the game as it progresses.
One of the best aspects of having a dedicated room and table is that I can leave the game set up between play and carry on the other aspects of the project, namely building the models and researching the theme whilst working through the game mechanisms that I collated from the earlier games plus a few others that might be practical going forward but that needed testing.
So the game I am presenting is very much a development play through and some of the rules I have added to the original set might get changed in time and bearing in mind I haven't played for twelve months, some might get omitted through error, but then that's what happens in most games anyway!

If you want to see the first part of the play, where I start with the approach of the British Leeward column as it attempts to penetrate the line of the Combined Fleet under fire, then just click on the video link below; the next part of play will follow in due course and I hope you enjoy the presentation.

Next up: I have a Vassal game report to post looking at Steve and I playing the full campaign game for Rommel in the Desert, plus six French third rates are on the stocks in JJ's Shipyard and I am starting to read my way through some new books that Santa brought me for Xmas, so book reviews are on the list.
Posted by carojon at 03:57

Email ThisBlogThis!Share to TwitterShare to FacebookShare to Pinterest
Labels: Age of Sail, All at Sea, JJ's Wargames, War by Sail