This week I got to try out a new way of enjoying the hobby of table-top wargaming when I played my first remote game over Zoom, this following watching a really interesting YouTube chat between Richard Clarke of Too Fat Lardies in discussion with friends about Miniature Wargaming On-line - A Beginners Guide.
So after getting in contact with another fellow Lard enthusiast, my mate Bob Connor who manages the DWG Lardy Day, we got together to put Richard's recommendations to the test plus me shortening my learning curve because Bob has a few such games under his belt already.
Well I have to agree with Richard that, if I understand the comments of Guy Bowers and the chaps at Wargames Soldier and Strategy Magazine correctly, I think they might be a bit premature in their assessment of this way of gaming as we certainly enjoyed the evening pushing some model ships about the table using Kiss Me Hardy (KMH) to moderate play and I have put together a short video presentation of how are game turned out.
I should say that I had originally planned to present the game as a solo run affair, as per my previous effort covering The Leeward Line scenario from the Battle of Trafalgar, but with comments from Rich and the chaps about how well naval games and KMH can work with this way of playing I was more than ready to try it out and would encourage others toying with the idea to have a go.
So to set the scene, I quote William James' 'A Naval History of Great Britain Volume 1' covering the year 1793 and the start of the French Revolutionary War;
'On the 13th of March, the British 16-gun brig-sloop Scourge, Captain George Brisac (but mounting then only eight 6-pounders, with a crew of 70 out of her complement of 90 men and boys), being a few leagues to the westward of Scilly, fell in with, and after a three hours' action captured, the French privateer Sans-Culotte, of 12 guns (eight long 8-pounders, and four English carronades, 12-pounders), with a complement of 81 men; of whom nine were killed, and 20 wounded, the Scourge escaping with only one man killed, and one wounded.' 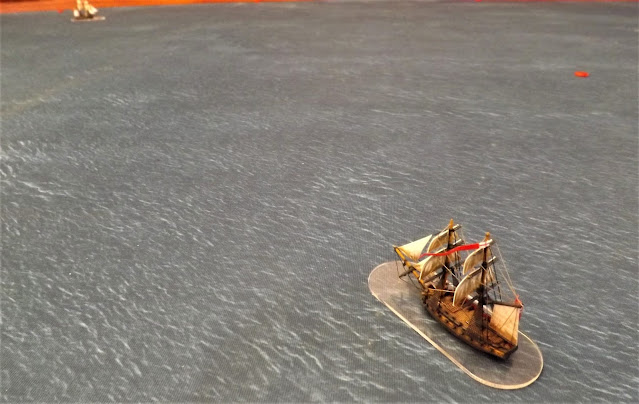 In my previous post I outlined my plan for this game using Gina Willis' Grand Tactical AI Wheel to bring the Sans Culottes onto the table and Narrow Seas to determine advantage and wind, and 'To Covet Glory to better modify KMH for small ship actions thus enabling me to complete the first two turns solo before Bob and I picked up the game from there, with Bob taking the Sans Culottes under command.
All at Sea - To Covet Glory in Narrow Seas
Thus with the iPad and mobile phone logged in on Zoom Bob and I played another five turns resulting in an equally fierce and decisive, if slightly shorter action as the Scourge and Le Sans Culottes went at it 'hammer and tong'.
Hopefully the video presentation of the game will help capture the key elements, so if you want to find out how it played, just follow the link to the video below.
Next up: Another report looking at another Peninsular War scenario from O'er the Hills and progress continues to add six French 3rd rates to the collection of Napoleonic ships. In addition adventures in the world of Vassal with a game of Richard III and all the fun of the Wars of the Roses or should that be 'The Cousins War'?
Posted by carojon at 00:12

Email ThisBlogThis!Share to TwitterShare to FacebookShare to Pinterest
Labels: Age of Sail, All at Sea, JJ's Wargames, Kiss Me Hardy, On-line Wargaming