All at Sea - To Covet Glory in Narrow Seas!

This time last year, having built a few models in the age of sail collection, I was working through some historical single ship actions, looking to develop those scenarios based around the concept of duels and chases to try a set up a framework around these games that better reflected what the commanders of these ships were trying to achieve when they ended up in the fights they did.
Very often these fights were a mismatch because the opposing commanders mistook the identity and fighting capability of their opponent before it was too late to alter course and escape and the ruses of flying false colours or shoddy handling of sail and rigging to add to the confusion only made things more difficult as most nations insisted on a positive identification to be made before engaging in combat, Barbary Corsairs excepted.
The other issue when refighting engagements between ships at the smaller end of the rating lists and below are that the rules have to cater for these lighter and more lightly armed fighting vessels, to allow the players to recreate the actions that could last for tens of minutes to several hours once the action became close.
Of course fighting these single ship engagements also presents added problems for the solo gamer in that representing the options available to an enemy commander of a ship desperately trying to outmanoeuvre ones own is problematic when you the player are trying to choose options for both ships, which is why I have focussed my attention of the larger ship engagements initially, where the line of battle tactics limit the options of the individual ship commanders on each side.

That was until I saw a very interesting video presentation from Gina Willis who is the designer of a board game 'A Glorious Chance', hopefully soon to be published, covering the naval warfare on Lake Ontario during the War of 1812 for which she has designed a tactical simulation for those who would want to set up the engagements generated by the game on the table top.

In the video she demonstrates the use of her Grand Tactical AI Wheel which, by setting up the course of the AI ship in relation to the wind and the player's ship randomly generates some plausible course directions for the AI vessel, and I thought it might be fun to try on the table top to bring ships into close action or indeed have them run simply by taking an opposite course to that generated by the AI Wheel.

Well that's the idea and so to test it I sat down at the weekend and put her design together, falling back on my old 'Blue Peter' skills (for non UK residents, a BBC TV kids show that taught you how to make models of Windsor Castle out of Cornflakes boxes and old washing up liquid bottles, back in the day when BBC made programs that people wanted to watch!) and with card, modelling knife and a Pritt stick made myself an AI Tactical Wheel that will generate my three numbers and help my AI vessel select a course to close with or run from the enemy.

The idea is, that the three numbers it generates is read off against a chart with six course options next to each set of three numbers, selected by rolling a D6. The ship will generally head towards the threat and my intention is that if the commander decides that he will run instead then that course option is simply reversed - 'simples!' as the Meer Cat said (Sorry another British TV thing).

The next idea was to choose a set of rules to marry with this idea and to further develop the thoughts around scenario set ups and small ship rules and that lead me to think about 'To Covet Glory' by Chris Stoesen, a small ship rules adaptation of Kiss Me Hardy together with a selection of some very interesting single small ship actions, with ideas around flying false colours and other such goodies.

The other idea was to take some of the scenario design ideas from another publication available through Wargames Vault, 'Narrow Seas' by  Wargame Vault Curs'd-Captain Products, and their frigate war set of rules 'Enterprize' which sets up these smaller engagements within a framework around the ideas of chases and duels, designed to allow enough scope to tailor them to the rules you want to use.

So as usual I sat down and started to mess around with both these resources to come up with my own ideas hence the title of the post and above and below is my table set up to try them out.

The scenario I chose to bring these ideas together was a simple action involving two brig-sloops that met 'a few leagues west of the Isles of Scilly on the 13th of March 1793' at the very start of the naval war of the French Revolutionary and Napoleonic War or 'Great War' as it was known before the titanic struggles of the twentieth century eclipsed it.

The reason for selecting To Covet Glory is that it is tailor made for these small ship engagements using Kiss Me Hardy as its foundation, a rule set I am very familiar with and of course using the chit activation system that makes them very solo play friendly. That said, I'm halfway through Rich Clarke's video recording on best ways to run games via Zoom, so I might see if we can get some live opposition in future games.

So to get things going I have set up the encounter between His Majesty's Brig-Sloop Scourge, nominally of sixteen guns but reported on the day of this encounter to have only mounted eight six-pounder long guns and with seventy men aboard, twenty men under strength, and under the able command of Captain George Brisac.

The opposition and the AI controlled ship is the French privateer brig Le Sans Culottes sporting a formidable armament of eight eight-pounder long guns and four twelve-pounder obusiers and with a crew of eighty-one souls, the commander unknown to history but out of due respect to Nick Skinner commanded by that 'devil may care', 'rash is my middle name', Lieutenant Visage de Vache.

Being a privateer merits the Sans Culottes as having a better than normal French crew, recognising their desire for prize money and volunteer status as 'Poor, Jolly Jack Tars', so this should make for a very interesting little fight. 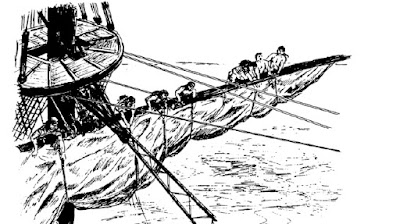 Fortunately or unfortunately this little action, one of the first in a very long war, only merits about six to eight lines in William James' history and so sea conditions, wind direction and details of the action are none at all, limited and/or concise, so I generated the wind direction based on prevailing westerlies off the Scilly Isles and used the Narrow Seas rules to generate the initial positions and preparedness for battle with the Frenchman being the slower off the mark to beat to quarters, and with both ships needing to confirm the identity of the other.

I shall record the proceedings as play develops and put together a presentation to follow.
More Anon
JJ
Posted by carojon at 00:33

Email ThisBlogThis!Share to TwitterShare to FacebookShare to Pinterest
Labels: Age of Sail, All at Sea, JJ's Wargames, Kiss Me Hardy