Eager for Glory, The Untold Story of Drusus the Elder - Lindsay Powell 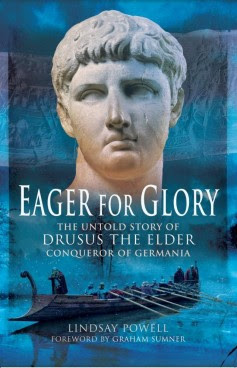 As part of my build up to putting the Roman collection together I am getting a bit of additional reading done to give me a better feel for and understanding of the army I am trying to create on the table.

This Xmas, as well as completing the buy in of my Dacian host, I also got my four heavy pieces of Roman artillery and two fantastic hard back tomes, "The Complete Roman Legions" by Nigel Pollard and Joanne Berry and"The Complete Roman Army" by Adrian Goldsworthy, so you can see the mobilisation is well under way.

As mentioned in recent posts I also have an eye towards the Germania frontier and I have been picking my way through "Eager for Glory" by Lindsay Powell over the last month, a birthday present from Will, and I thought I would share my thoughts after reading it.

This book is heralded as the first book since ancient times to document the life and achievements of this ultimate Roman war leader and all round "damn fine chap" as the Romans would certainly have seen him. Unfortunately all the contemporary ancient written records of his campaigns and life are lost to modern researchers and thus Mr Powell has pulled together what remains of the written texts together with the latest research from the archaeological record to put together this, what I thought, excellent read.

I have to say that before reading this book my knowledge of the Roman contacts with the German tribes pre Varus and Germanicus was rather sketchy other than the activities of Caesar and his contacts with the tribes during and after his conquest of Gaul.

Having read this book I can now understand the relationship that this early contact with the Romans created with the Germans and it really puts into context what followed in the time after Drusus.

Lindsay Powell has structured his book in a chronological format around seven chapters followed by the authors assessment of his life.

In Chapter One - Drusus the Youth we start with the young Drusus (38 - 18 BC) and his family relationships with his mother Livia, brother Tiberius and step father Augustus, which was a time heavily influenced by the civil war and the struggle between Augustus and Marcus Antonius. The chapter goes on to look at his early career into public life and his marriage to Antonia Minor, the daughter of Marcus Antonius and Octavia, Augustus' sister. As a young girl Antonia would have been known to the young Drusus and who would, unusually, form a life long bond with her husband and never re-marry after his early death; a Roman marriage for love it seems rather than one of political convenience.

Chapter Two looks at the life of Drusus the young soldier covering the years 17-15 BC with his first command in Raetia and Noricum in what became known as the Alpine war as Augustus sought to extend control over the Celtic tribes that bordered the narrow link between Italy and Gaul and was subject to constant raids primarily from the Raetians. This chapter also includes a look at the Roman and Celtic troop types together with their arms and equipment.

Chapter Three is titled Drusus the Builder and the years 14-13 BC which covers the time that Drusus, now a young father was appointed governor of Tres Galliae with his palace at Lugdunum, modern day Lyon in France. From here he oversaw the build up of troops and fortifications along the Rhine, in preparation for the German War; including the building of the famous canal designed to give sheltered acesss to the North Sea by linking up the River Rhine to the Zuider Zee and thence along the coast. The Drusus canal or fosse Drusiana required the agreement by the allied tribe, the Batavi, who after their discussions with Drusus also permitted the building of a forward base in their territory to accommodate two legions.

Chapter Four, Drusus the Explorer, covers the year 12 BC when as well as launching the German War, into what was at that time uncharted territory with an amphibious borne land campaign, combined with diplomacy and treaties with the Frisii and Chauci tribes, Drusus also had to deal with an attempted rebellion in Tres Galliae.

Chapter Five , Drusus the Commander covers the year 11-10 BC and looks at the Germanic tribes and, with emphasis on the Chatti, Cherusci and Sugambri, their fighting techniques. This time was also one of near disaster for Drusus as he was nearly badly defeated at the Battle of Arbalo.

Chapter Six, Drusus the Consul, looks at 9 BC when Drusus attains the highest political office, but returns to the front to lead his army to the edge of the Roman known world and the River Elbe, only to turn back under extraordinary circumstances that are referred to in the sources that predicted his untimely death. The author then works through the likely scenarios that might have caused the death together with the complications that may have occurred from the suspected injury.

Chapter Seven, Drusus the Hero, describes the journey his body took back from Germania to Rome. the reaction to his death and the exploitation by Augustus and his successors to exploit his subsequent legendary status as a Roman role model and 'Conqueror of Germania'.

The book then has a summary and assessment of the life of Drusus and events in Germania that followed his death, with the disaster under Varus and the follow up campaign launched by Drusus' son Germanicus that was practically a carbon copy of his father's invasion plan.

Each chapter carries an extensive list of the references and sources quoted or referred to in what was a really good read. The final assessment makes a really interesting comparison between Drusus and his accomplishments and that of Alexander the Great, with both men dying somewhat prematurely at 29 for Drusus and 33 for Alexander. The one shining example both commanders exemplified was that charismatic leadership that convinced their men to press on in the face of extreme difficulty and a willingness to lead by example with, in Drusus' case, an almost rash determination to challenge German tribal leaders to personal combat in his pursuit of glory and an eagerness to inspire his men to victory.

Lindsay Powell also looks at what might have been had Drusus survived the passing of Augustus, given the professed leanings expressed by him to the Princeps of a return to a Republic. The devotion of his troops, his military record and his personal reputation as man of high integrity, combined with charm may well have enabled him to have turned the political clock back whilst the Principate was still in relative infancy.

The text is accompanied by twelve really good maps and plans that helped to follow the progress of the story, together with sixteen pages of full colour photos of family busts, relevant archaeology, re-enactors displaying the dress and weapons of the Roman and Celtic/German warriors and modern day views of the terrain discussed.

Given the somewhat limited material to work with, this made an excellent read and I really felt I had learnt a lot about a great, but somewhat forgotten Roman hero and has me ready to read the other book in the series on his son Germanicus. In addition I can see a trip to Holland and Germany with Will to have a look at some of the great museums and Roman displays that capture the events of this period of Roman expansion.
Posted by carojon at 11:01