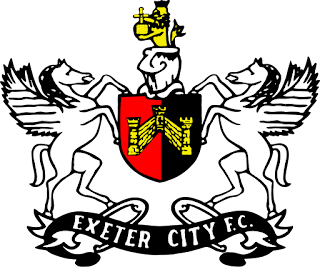 Every now and then JJ's Wargames goes "off piste" and looks at Devon and Sport themed activities and sometimes combine the two.

Last night was such an occasion, and at the risk of being slightly partisan, take the opportunity to offer a huge congratulations to Manager Paul Tisdale and Exeter City Football Club who did themselves and the city of Exeter proud in the FA Cup.

Exeter City took the lead twice in the match and looked nothing like they would against a side that is seventy odd places above them in the football league. The game was broadcast live on BBC TV and little St James' Park took centre stage on national television, with a maximum crowd of just over 8,000 crammed in to watch a thrilling FA cup encounter.

A win would have been very special in the history of the club, but the draw means a potential windfall of an estimated £700,000 from receipts from a replay at Liverpool which will come in very handy; and it will be fun to hear "Ooh Arrr, we are Exeter" echoing around Anfield.
Posted by carojon at 00:45