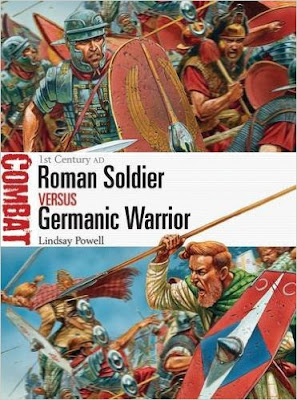 Following on from my recent review of "Eager for Glory", Lindsay Powell's biography of Drusus the Elder and his campaign of conquest in Germania. I though I would share my thoughts about the next book I decided to tick off the list of reading, which rather aptly was another title by the author on a similar subject matter.
http://jjwargames.blogspot.co.uk/2016/01/eager-for-glory-untold-story-of-drusus.html

I picked up my copy of this book as a Kindle offer from Amazon and it had been sitting in my E library for several  months when I remembered I had it following finishing the Drusus book.

This is the first title in the Osprey "Combat" series of books I have read and like most of the other Osprey series it provides a compact appraisal and summary of its given subject with plenty of pointers to more detailed sources, coupled with great artwork for which the publisher is renowned, in this case done by the great illustrator Peter Dennis.

I have to say I really enjoyed this book which was a perfect follow up to the Drusus title and consolidated the knowledge gleaned from the first book. This book really does pack a lot of information into 80 odd pages and provides a good grounding in the subject for someone like myself getting to grips with the period.

Introduction
This chapter covers the first contacts with the German tribes by Caesar in Gaul and consolidation of Roman occupation under Augustus and the appointment of Drusus to lead the campaign into Germania, its progress up to his death and the follow up initiatives of Tiberius and Varus followed by the rise of Arminius, which sets the scene for an analysis of three key campaign examples and the fighting that followed

The Opposing Sides
Before launching into an analysis of the campaigns, Powell provides a chapter looking at the two sides troop types and general organisation, covering training, weapons, tactics, morale, logistics, leadership, communication and the role of Roman allied and auxiliary troops. I was familiar with most of this content, but found it a useful recap with a few nuggets of new information to add to the learning.

The next three chapters look in detail at three examples of campaigning that help illustrate the way the two armies fought each other in the early years of the 1st Century, with the classic ambush scenario that is represented by the Teutoburg Pass, the set piece open field clash at Idistaviso which favoured the Roman style of combat and an attack and defence action with the German warriors set up in behind field defences and in wooded terrain with the Romans looking to force them out and mop up in any pursuit.

Teutoburg Pass - Summer AD 9
A familiar battle in the woods fought over several days designed to wear the Romans down with attritional warfare in terrain that allowed the German warriors to make full use of their ambush style of warfare, before moving in in force to administer the coup de grace. This kind of action depended a lot on surprise, and the Romans became less accommodating as the campaign progressed.

Idistaviso - Summer AD 16
The classic line of battle with German tribesman charging down from their ridge line position into the three line Roman battle formation with cavalry hovering on the flanks to take advantage of any waverers. This fighting suited the Roman tactics and their better discipline and drill won out at the end of the day.

The Angrivarian Wall - Summer AD 16.
The Romans attack a prepared position, get repulsed on the first attempt, then resort to softening up the Germans with their artillery before sending in the legionaries to take the position. Another way for the Germans to make the Romans fight a more attritional battle and perhaps cause them to question whether the campaign would be worth pursuing.

Each of these chapters follows a similar format with a description of the events leading up to the battle giving the context for the action, usually accompanied with some very good battle maps to illustrate the set up. The battle maps are well illustrated designed to give a time line to key events that shaped the clash. There is then a description of the battlefield based on the sources and then what is often the best guess as to where the actions may have taken place with photos of some of the modern sites today to give an impression of the lie of the land.Then we get a blow by blow account of each action illustrating the way the various commanders used their units in the three very different battles.

Analysis - Leadership, Mission objectives and strategies, Planning and preparation, Tactics, combat doctrine and weapons. The penultimate chapter acts to summarise the battle descriptions by teasing out the key command decisions that influenced the outcomes and a consideration of the strengths and weaknesses of both armies tactics that shaped the style of fighting they adopted

Aftermath - the conclusion to the book discusses why the campaigns were initiated by the Romans in the first place and how events probably drove Emperor Tiberius to put a halt to any further troop deployments and consolidate his hold on the west bank of the Rhine, content to conduct a proxy war with the help of Rome's German allies.

Bibliography - A very useful list of the ancient sources

In summary a good read and a useful starter book to encourage further reading, with very inspiring artwork to encourage the wargamer to get painting.
Posted by carojon at 15:33