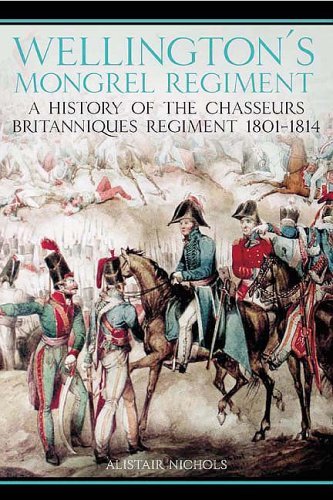 Wellington's Mongrel Regiment, A History of the Chasseurs Britanniques Regiment  1801-1814

I decided to read 'A History of the Chasseurs Britanniques Regiment' (CB) as I was acutely aware that as a student of the Peninsular War and Wellington's army in particular, this originally French emigre regiment had passed my scrutiny and I only had a basic knowledge centered on all the established clichés from Oman and others about its high rates of desertion.

On reading Alistair Nichols history of the regiment I soon discovered the large gap in my knowledge together with a certain confirmation of the previous impression which reinforced my thinking that the CB were a rather enigmatic regiment, very difficult to pin down in character.

By that I mean that the regiment displayed great acts of stoicism and bravery during its service in British arms but this contrasted hugely with its inability to maintain its numbers causing it to be withdrawn from picket duties because of desertion to the enemy, causing much aggravation with its brigade comrades forced to take on their duties as extra work. 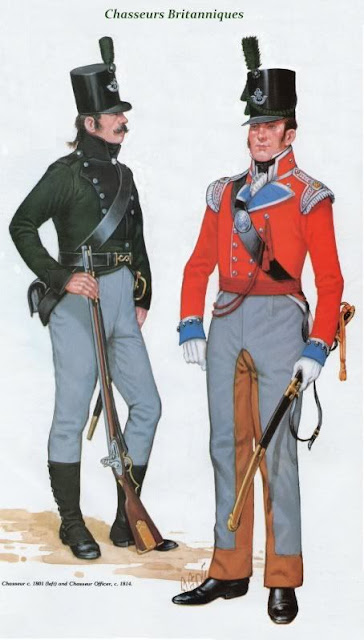 The enigmatic nature of this regiment even extended to its role, with the name and role planning suggesting a light infantry battalion to be a cornerstone battalion in Wellington's second Light Division which became the 7th Division. The 7th Division, known as the 'Mongrels' to the rest of Wellington's army due to its composition of many foreign elements (The CB, Brunswick Oels and two battalions of KGL Light Infantry) never lived up to the reputation of their predecessors and for all intents and purposes developed into another Line Division.

This confusion in roles is emphasised by the CB themselves adopting many dress items of the Light Infantry as illustrated in the officer above with shoulder wings, green plum and bugle shako badge, but with the battalion companies dressed as a line battalion with a grenadier company, fusilier companies with standard shako plate and white and red and white shako tufts. The officer seen below in a Line Officers bicorne illustrates this point.

There are other peculiarities in uniform, covered in the book such as the black and/or white cross-belts and also the look of the unit in the Revolutionary period. There is a very good section covering the national demographics of the regiment which changed from its mainly French Royalist cadre to include other significant national groupings encountered in Spain.

The book left me with an impression of the frustration Wellington must have felt about the battalion when he expressed his exasperation at there desertion rates, particularly with crossing over to the enemy; which due to the risk of giving the French, free easy intelligence on Allied forces and intentions, carried a capital penalty for those members returned into British captivity, certainly in the early-mid part of the Peninsular War.

This issue contrasted with the battalion that performed stoically on the slopes of the Pyrenees as Wellington's forces faced a surprise French offensive lead by Marshal Soult which required individual battalions to fight their own combats and stands very often with little support from divisional or army assets.

For the wargamer looking to rate such a unit, it left me thinking that you couldn't really know which CB battalion would turn up on any given day or how many of them. However, as Nichols points out, they were reliable enough for Wellington to keep them in his service and several British battalions soon found themselves relegated to garrison duties in Lisbon, Gibraltar or Cadiz if they didn't perform so this speaks favourably of the CB overall.

Nichols does a good job of looking at the problems faced by the CB of keeping men from different nationalities focused on the reasons they joined the ranks in the first place, particularly in a British army that enforced a draconian level of discipline foreign to many of the men. Overall I think I agree with his conclusion that the Officers of the CB did a pretty good job and that Wellington could often be the harshest of critics.

The 248 page book consists of the following sections:

In addition there are eight pages of photographs of portraits of key notables, battle sites and documents pertinent to the text.

I enjoyed  reading this book particularly for the coverage of the early history of the CB and the fighting in Egypt and Southern Italy. The Peninsular War coverage less so as I thought there was too much coverage of the brigade activities rather than the CB regiment itself, but that is probably down to a lack of information.

I know I mention this again and again just like many other readers, but please, please, pretty please can we have more maps to illustrate where the action is taking place and where units were operating in any given action. I am sorry but the maps in this book were in the main "pants" (a British expression meaning not at all good).

The one that stands out for me was the map on page 140 of the Western Pyrenees which had a multitude of tiny black triangles, some filled in to indicate where peaks were that funnelled the fighting into the many valleys or on the ridges. I'm sorry Pen and Sword, I love the service you offer of bringing great military books to the interested reader but you should know that maps like this are not good enough.

One other useful addition would have been some illustrations of the uniforms worn throughout the period covered. I have included some here in my post as I feel a picture is worth a thousand words. Oh and if you were hoping this book would shed some light on the look of the Regimental Colours, I'm afraid that information seems still lost to history.

A useful tome to have on the shelf when it comes to the time when I start work on this famous and interesting regiment and a good book to add to my knowledge.
Posted by carojon at 02:36