I love reading and playing historical scenarios. I even enjoy writing and putting them together myself. Part of the fun for me is reading what others have done, comparing that with my own understanding of the events portrayed and then writing up my version emphasising and bringing in the aspects I want to portray. My objective is looking to create a game situation, based on the historical events and situation, that will give a challenge each time it's played and that encourages you to want to give it another go. 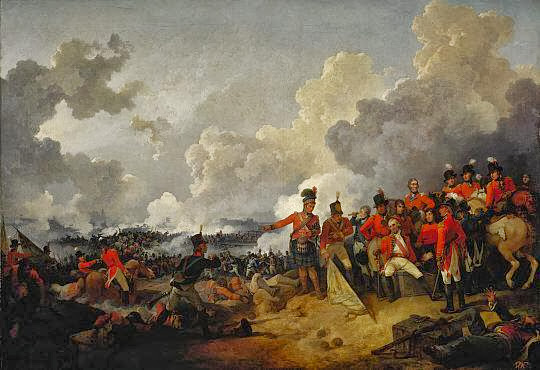 I have always been interested in the smaller earlier battles of the British Army in the French Revolutionary and Napoleonic Wars that range from India, North Africa, Northern Europe, Italy to South America and the Caribbean. Theses campaigns were very much about the British Army finding its confidence in its abilities and, just as in the French Army of the time, developing its battlefield tactics. In the process of many victories mixed with occasional defeat a tactical doctrine and command system was developed that culminated in the army seen in the later campaigns of the Napoleonic period.

The earlier part of the revolutionary wars, particularly looking at British involvement on the land, is not spoilt for scenarios and therefore it is interesting to look at them when they come along. One such offering is from James R Arnold a name I was familiar with after looking at his range of books covering the campaigns of Napoleon and indeed he has co-written a collection of scenarios covering the campaigns of 1805-07. It's great to have an historian interested in writing scenarios for the war-gamer.
Alexandria Scenario - James R Arnold

So as a first time purchaser of Mr Arnold's products I thought I'd share my impression.

The scenario is laid out in a very logical format over eight pages with an historical/game overview, pre-battle briefings for each C-in-C, table-top dimensions with map of the key terrain features, terrain description and effects, game time/duration of game, special rules, orders of battle, set ups and victory conditions. The information contained is very precise and together with the maps easy to follow with a clear description of why the author has made certain choices about the terrain or troop classifications.

The author states his methodology based on his own preferred wargaming rule set, but the troop morale ratings based on a score for experience and elan are generic enough for a simple conversion to most rule sets others may wish to use. The "Experience" levels range from Militia, Regular, Veteran to Elite and the "Elan" ratings being numerical based on a ten point scale, but usually running from 6(worst) through to 9(best).

The orders of battle strengths are explained in the text as to how they were arrived at and being in numbers of men present, should again allow easy conversion to other rules.

The special rules cover off the peculiar events that affected this particular battle and the suggestions as to how to model them, all of which seemed very reasonable and thought through.

The set ups allow for the French to follow the historical attack just before dawn or to be more conservative and go for a daylight set up with suggested effects from either choice.

The "Additional Scenario" section puts forward ideas for "what if "alternatives to the historical game adding to the re-play potential.

My only small criticism would be the omission of a list of the reference sources used in the research.

This was particularly noticeable with a point stating that British Light Companies had yet to master skirmish combat, which justified giving a French advantage in skirmish capability. As there are no references to check this assertion with, I was not convinced. General Abercromby spent time in Turkey training up his forces for this campaign before landing, and British Light Company drills were well established by 1801, with several exponents of the art, commanding in Abercromby's force, General John Moore, who would set up and train the British Light Infantry, General Eyre Coote later of the Rifles. In addition the British force had several foreign corps armed (rifles) and trained especially for light duties. These together with the combined light company men had the potential to acquit themselves more than adequately. I am not aware of any references to the British being unsettled by French skirmishing.

I thought it might also be useful to list other sources available if you are interested in the Egyptian Campaign. There is a useful article from Wargames Illustrated that looks at The British Army under Abercromby.
http://www.wargamesillustrated.net/Default.aspx?tabid=297&art_id=3227

and also the French Army
http://www.wargamesillustrated.net/Default.aspx?tabid=297&art_id=3226

The Osprey title on the subject is getting on a bit now but is full of great information and the excellent artwork of Gerry Embleton
http://www.ospreypublishing.com/store/Napoleons-Egyptian-Campaigns-1798%E2%80%931801_9780850451269

In addition there are the two titles covering French and British forces from Caliver Books. I haven't seen these but do own one of the Peninsular War titles and was very pleased with it.
http://www.caliverbooks.com/Partizan%20Press/1798-1820.shtml

The only thing needed now is a great range of figures in 18mm specific to the theatre. I'd love to do some camels and Mamelukes. If there are any manufacturers toying with the idea let me know please.
Posted by carojon at 09:50