This week I have been very much focused on finishing off the terrain requirements for the Vimiero game I am planning to run over the next two months. This has primarily involved river building and a few other important terrain markers.

Whilst doing this and some other paint jobs on figures, for friends, I was provoked into thought by a post I saw on TMP by a fellow gamer musing over whether to game Napoleonics in 15mm of 28mm and the pros and cons of doing either or both. As always TMP proved a truism that opinions are like noses, every body's got one, and the good folk of the TMP readership chimed in with their thoughts.

The one thing that, surprisingly, didn't get a mention was terrain. You would think that two different scales require two sets of terrain if you want to put on the odd game yourself.


I think the above example illustrates the importance most gamers attach to terrain, and often the games I see depicted reflects this priority in thinking. I am often puzzled and somewhat amazed at the time and effort many gamers go to in producing wonderfully researched and painted figures, prepare the necessary orders of battle for a certain game, and then present that game with an eclectic mix of terrain that fails to do justice to all the work that has gone into the other game components.

Only the other day my eye was drawn to a battle report, with pictures, of a game representing one of Napoleon's early battles with the Austrians in the Alps. I am always interested in this period and was immediately drawn to the link. The order of battle was complimented by some beautiful figures fighting over what looked like a generic rural area of England with Tudor beamed thatched cottages, a building I am pretty sure is quite rare in the French alps!

I realise that if terrain is not something that "floats your boat" then my comments are starting to get irritating and you may be starting to move towards the delete button. However if you are still reading, and are up for the challenge, then let me be even more in your face, by saying, if you are not interested in terrain, then you should be.


Surely the whole point about bringing model figures on to a table to represent a period in history has to be about getting a balance between playability, functionality and esthetic's. My feeling is that very often its the last factor that gets forgotten, to the detriment of our hobby. If you're not bothered about the look of the game and just want to play out a given scenario, then it would be simpler to play a board game, computer game or dare I say, use unpainted (silver surfers) figures, with card terrain and reduce the effort.


I'm not representing the "fasionistas of war-gaming" who get all picky about a particular colour shade of French Blue or style of Venetian  portico work that appeared on such and such 15th century building. The point is is that it's not difficult putting together a simple collection of terrain items to produce a good looking game and that it is achievable over time with a little bit of research, modelling and planning.

You don't even have to have a purpose built table like the one I have at home. When putting on games at the club, I will grab my trusty "Games Workshop" battle mat, some foam hills to stick under it and the most appropriate scenic items in the  collection and off we go. Most of the games pictured on the Devon Wargames Blog are testament to that point.

To help in the process of putting together a collection of terrain items I made a key decision. I, like many gamers, run my hobby on a limited budget. A budget requires discipline, particularly if you are going to make the most of it, trust me, I'm married to a finance manager! The key decision was to wargame in one scale to allow me to have terrain that would suit all the periods I am interested in. Thus after consideration, I decided that my chosen scale for all my land conflicts would be 15/18mm. I now have collections for AWI, Napoleonics and WWII in those scales and all my terrain basics are interchangeable between those periods. I only have to alter the buildings and create a few time/era specific pieces to put on a game with those collections.

As the saying goes, "Fail to plan, Plan to fail". Too many times, I see gamers who fail to reign in the gadfly in all of us, that falls in love with a particular range of figures, not thinking about any other considerations about terrain and then ending up very rarely using them.

Remember, the other two words I mentioned were playability and functionality. In Napoleonic games in particular we are constrained by ground and figure scales all of which causes lots of contrivances that enable us to fit a two and a half mile wide battlefield onto a nine foot wide table. However these contrivances can and are accommodated by the rules/scale of figures we use to enable us to game out the battle we do. Thus my version of the River Maciera is to depict what might seem just a small dike/brook, up against the 18mm Napoleonic warriors due to fight over it, but with the ground scale used is in fact an artillery/vehicle stopping waterway requiring bridges to enable access across it.

Also, as a Peninsular War enthusiast, I am all too aware of the importance of knowing where the "military crest" is on any given ridge. For my British commanders playing in a few weeks time those crest lines will be very important in deciding if they are able to repulse the French columns advancing on them.


Thus a simple, but effective way of indicating if you are behind, on or in front of said crest is the use of the humble terrain marker made from roof felt and disguised as a bit of upland scrub

All the terrain I have pictured on my table is relatively inexpensive, particularly when compared with the cost of figures. Some of it is home made, most of it has required some input from myself, in the form of painting it or sticking it together. I don't regard that task as any less important that creating the units of figures that will fight over it. The beauty of functional terrain is that it can be used for other eras, with some thought. Thus this scene could easily be adapted to rural India for Wellington's earlier campaigns, or WWII Italy/Tunisia. With a selection of European or North American buildings it could be transformed into mid/eastern Europe, or North America for a dust up in the A.W.I. or War of 1812. With the addition of snake rail fences the difference between the two would be confirmed. 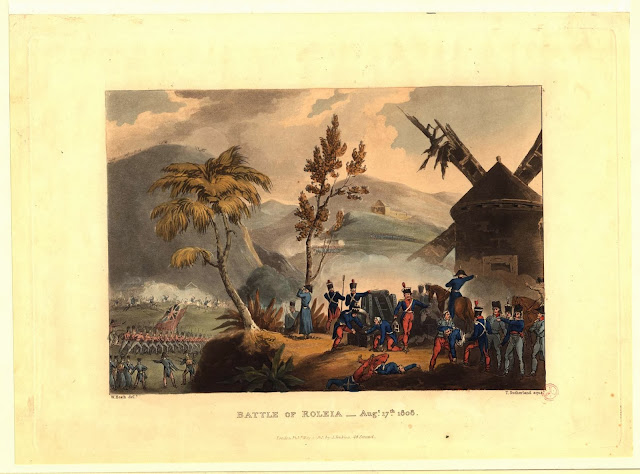 My windmill was purchased and constructed with one idea in mind, to help the viewer, who has any idea of what to expect to see of a battle in the Peninsular, get immediate confirmation of what he or she is looking at.

Terrain building just adds another layer of fun and interest to our hobby. We can spend those few moments between planning and realising the units that will complete our orders of battle by studying pictures from the times through to modern views, together with walking the sites themselves, all with the point of identifying those key bits of terrain that need to be modelled to enable our game to tick all three boxes, playability, functionality and esthetic's, the P.F.E. of wargaming.

As always, let me know your thoughts. The clever, constructive and thoughtful ones always get published. If you couldn't care less about terrain or it's very much a lesser consideration for you, then share your thoughts as to why.

Next up, French mounted colonels from Khurasan Miniatures, the bell tower for Oporto and the Vimiero game,(the invites have gone out).
Posted by carojon at 04:48