Yesterday I had a break from Napoleonics and put on a WWII scenario using Battlegroup Overlord. The last two occasions we played these rules we used a scenario from the book "First Battle Honour, Breville" then we played out the Lardies scenario "Assault on Pegasus Bridge" and yesterday I took another Lardies scenario, "Bas de Ranville" for which there is a full game report on the Devon Wargames Group Blog

Whilst putting together the scenario for this game and playing it yesterday, I think I have finally made my mind up about this set of rules. Back in May of this year I posted my thoughts and impressions of them. At the time I made it clear that I didn't feel qualified to call my thoughts a review as I really hadn't seen enough of them to make any conclusions.
﻿﻿ 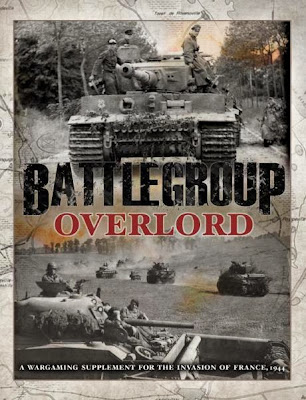 I was clear in my mind where these rules fitted in to my thinking about game versus simulation and that this set fell very much on the game side of the spectrum or though less so than other sets like "Flames of War".
The "fun" side of the rules are very well catered for in the morale/event chit draw system and I think this is for me is the most attractive aspect of the whole system. That being said I think I have a "love - hate" feeling towards these rules and I can't seem to get past the aspects that irritate me with them.
Namely the units and orders of battle as constructed in the books seem to me contrived to fit the rules, and I find myself continually wanting to make changes based on the historical orbats and/or likely effects of combat attrition. These changes are not made easy with the Orbats having attached morale ratings based on the importance to the force as a whole. Up or down grading them affects this overall calculation and is not easy to assess as with a simple points system or no points at all.
After yesterdays game I now think that I should have defied the orders of battle in the source book and given the Germans their historical set up of two MG42s per section instead on the one listed. The MG34 is given as the standard weapon for Panzergrenadiers in the Normandy book, where, in most sources I've read, the MG42 was the standard by June 44 and if anything it was the MG34 that was the unusual weapon, particularly amongst Panzergrenadier units.
The ammo load outs for AFVs have been mentioned by other commentators and like the number of machine guns in a platoon, I find myself using them out of concern that leaving them out or changing them will alter radically the game balance that the designer intended, I then think that this is a contrivance to give a game rather than a simulation and I want a simulation.
My compromise has been to set up the HE/AP numbers myself to at least add a modicum of reality. So for example, in yesterdays game I gave the 105mmSP a load out of 5 rounds of HE, figuring that this gun is a mobile artillery piece so would be carrying that kind of ammunition. However the 75mmSP AT version also carries 5 rounds, which could be either AP or HE. If I were the German commander I would want 5 rounds HE for that scenario, but in reality the vehicle was designed as a tank killer so a mix of 3AP and 2HE seemed more appropriate. All well and good you say, but this number of 5 rounds is a contrivance and bears no reality to the number of rounds carried or the firepower potential of the vehicle. That 75mmSP had only two rounds to fire in the game and I find that a bit silly.
You could then argue for the inclusion of an ammunition truck to reload the vehicle as the rules intend, but this is a contrivance too far for me and so I left the ammo waggon out.
Finally, the drawing up of the orders of battle are a chore made easier by the Greg Farrell orbat generator, but even here I find myself producing the list of forces for each side, then converting the word document into a PDF so I can take a JPEG into Paint and put in the Gun and Ammo stats together with any tweaks to the units that I just have to make. Then I put these revised orbats into my briefings.
This wouldn't be half as bad if Greg Farrell were authorised to allow his brilliant orbat programme to load up the weapon stats as well as the weapon itself instead of the empty boxes that I have to fill out manually. This surely isn't a problem, even the guys at Battlefront allow their stats to be used in their equivalent on line orbat organiser.
I have really tried to love the BattleGroup rules and see them for what they are. At the end of the day I guess I am a bit too old school and I want my rule sets to at least fool me into thinking I have a simulation set up and its probably me and not the rules that is the issue. These are small examples I know, but they really wind me up and so I think I am in the camp of happy to play if these are the rules being used, but they will not be my turn to set, and so its back to "I Aint Been Shot Mum" where I can play the period not the rules and hopefully after next month Chain of Command, which I have the rules but haven't played them yet.
﻿
Posted by carojon at 03:34