The next unit completed in General Portago's 3rd Spanish Infantry Division at Talavera is the Imperial de Toledo Regiment. 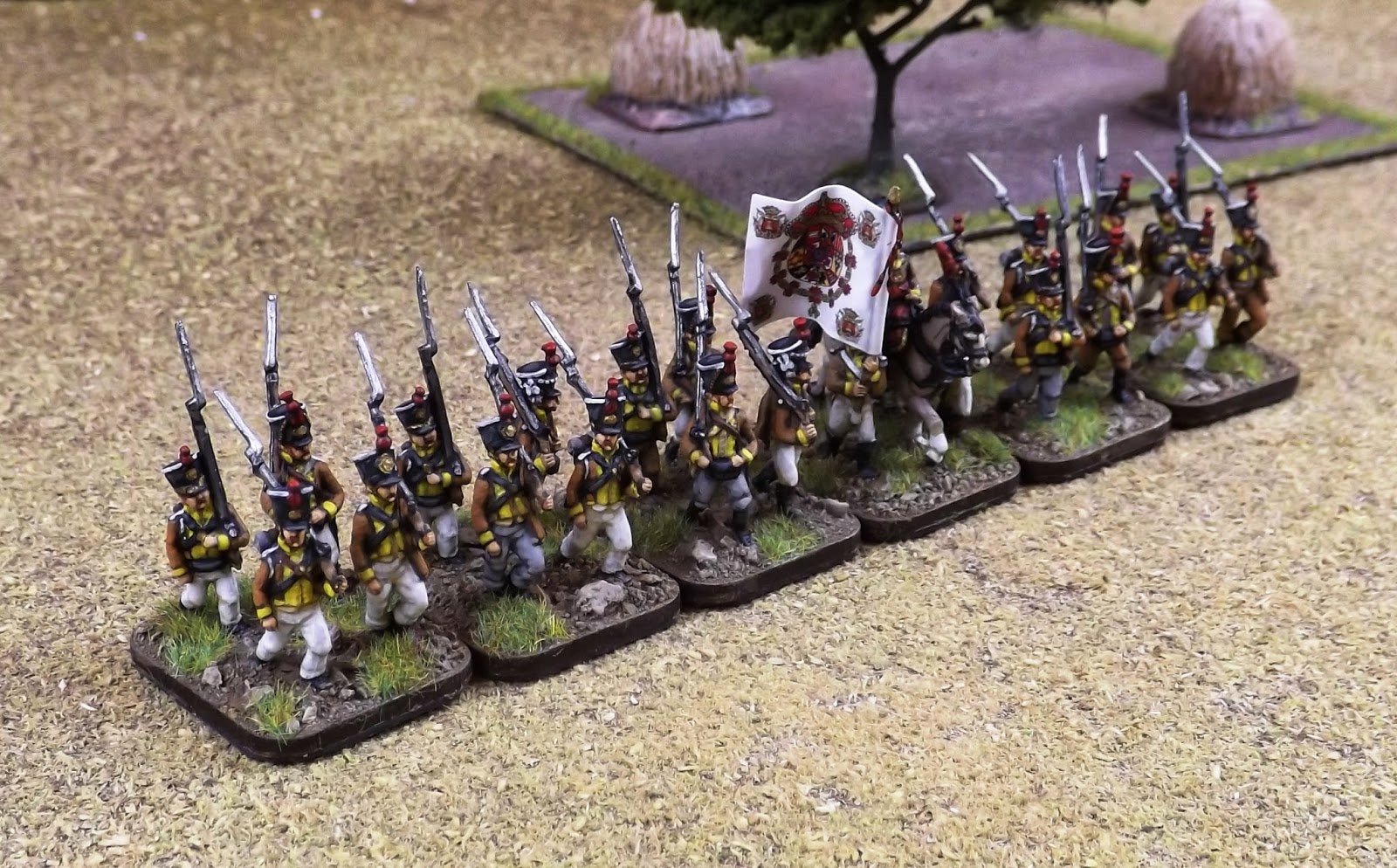 This regiment is listed in Oman as a new battalion of Levies as part of the Army of the Centre under Cuesta at the Battle of Medellin in March of 1809. Like the Badajoz Regiment it was almost destroyed in the battle and had to be hastily rebuilt in the months leading up to the Talavera campaign. Thus I have chosen to model this new battalion in the brown with yellow facings, befitting a Junta raised volunteer unit. 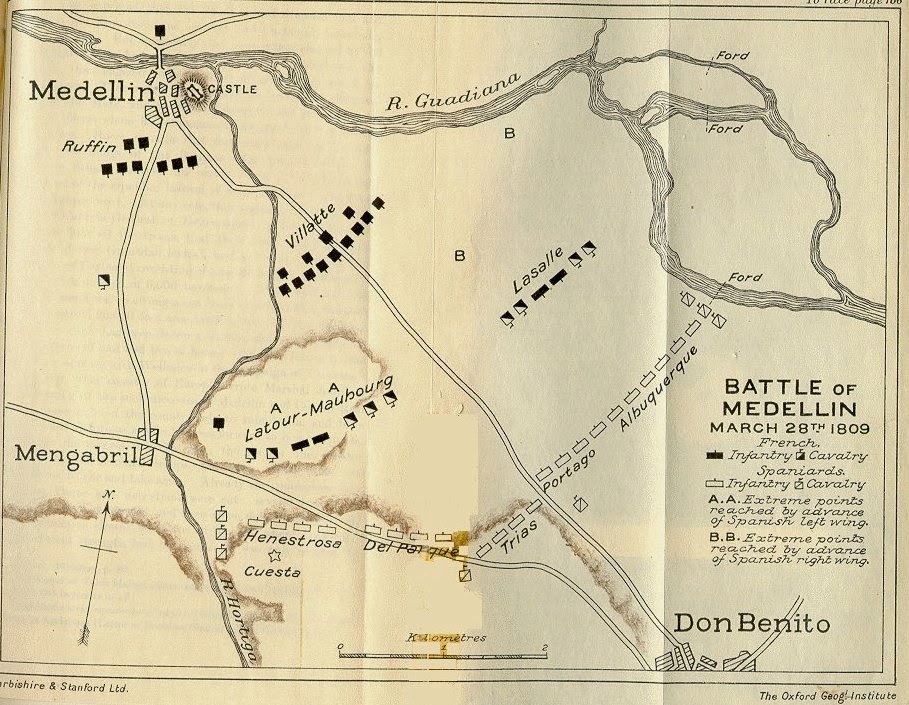 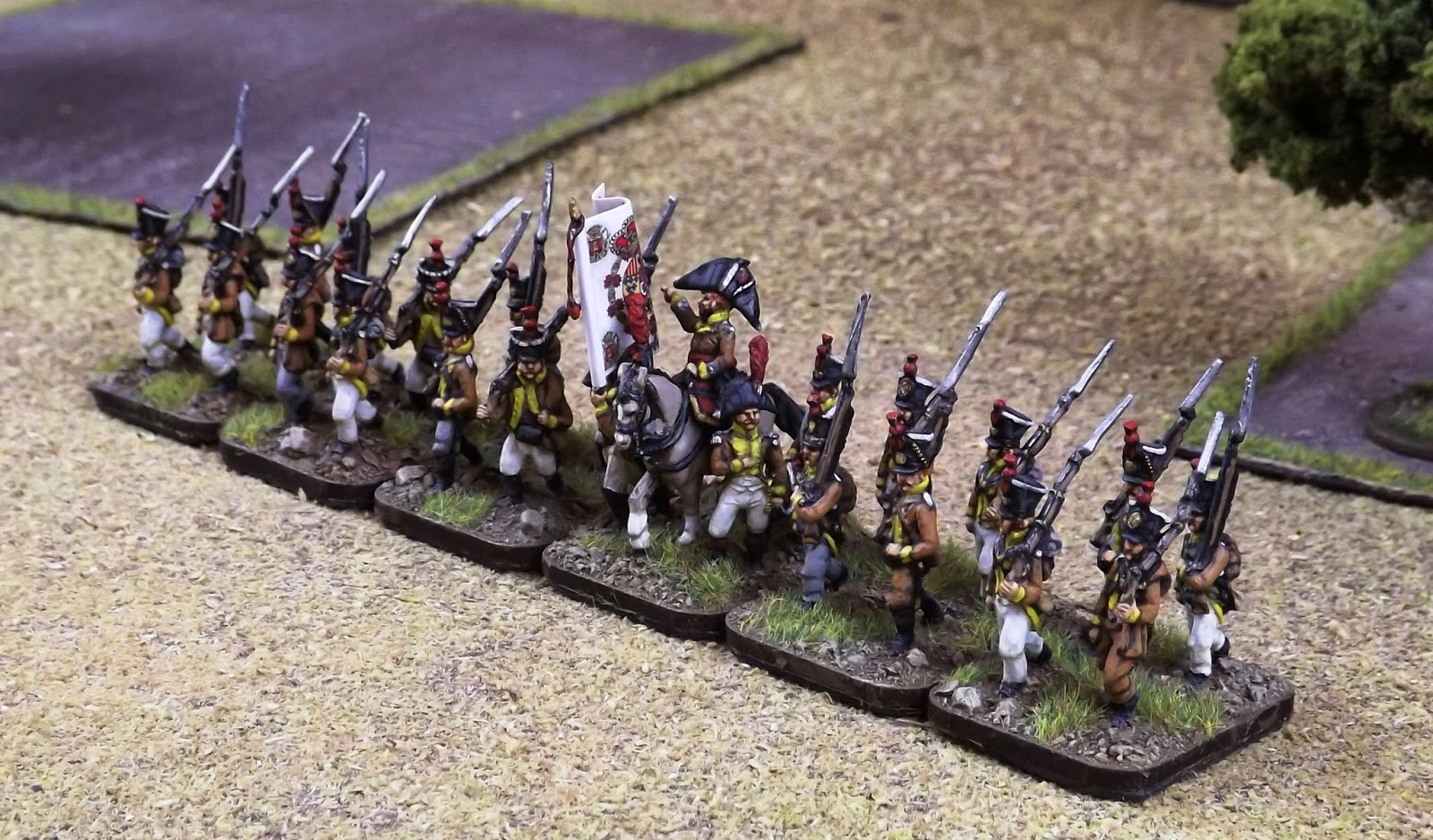 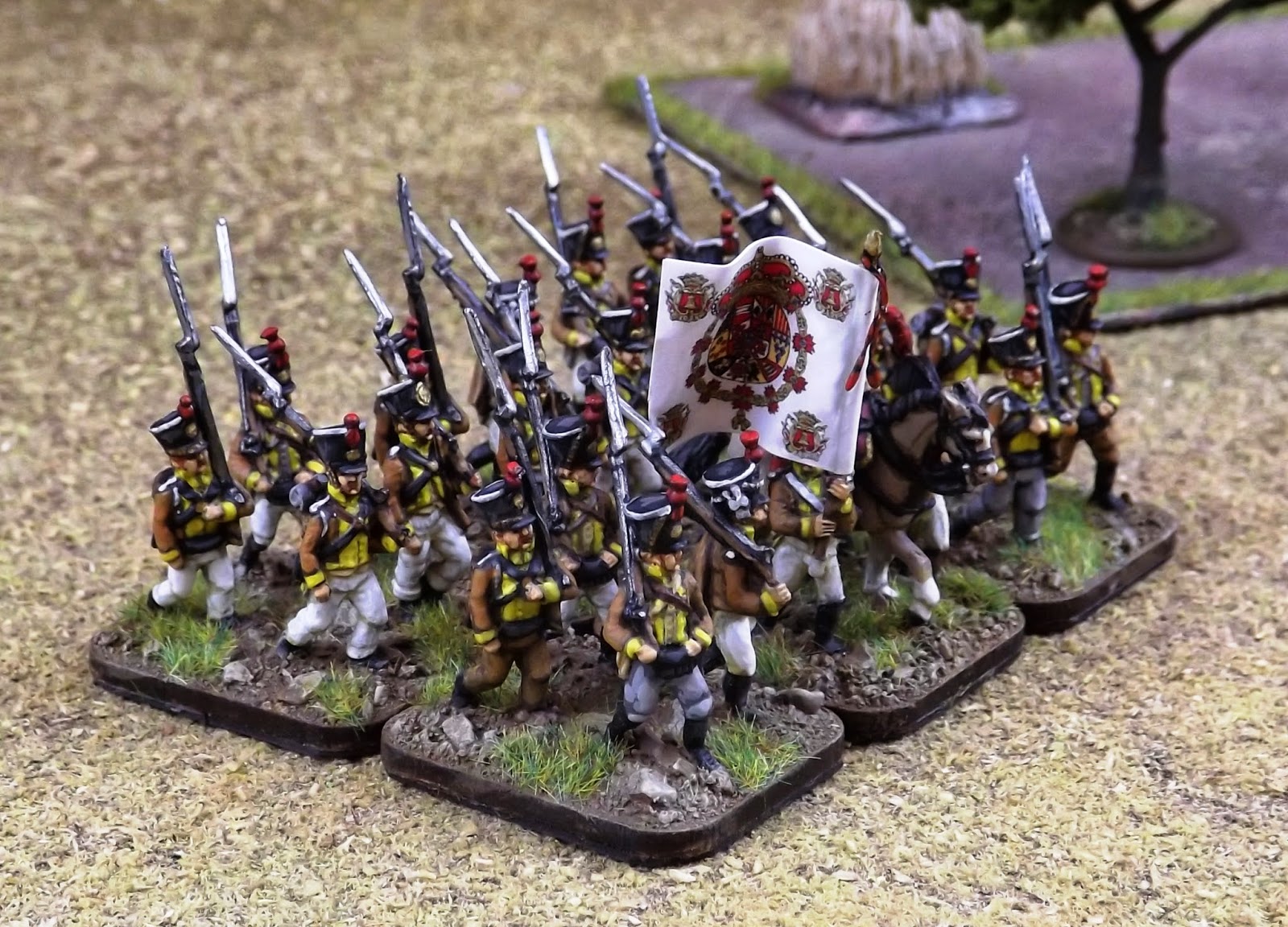 * Not at battle.
Oman, A History of the Peninsular War 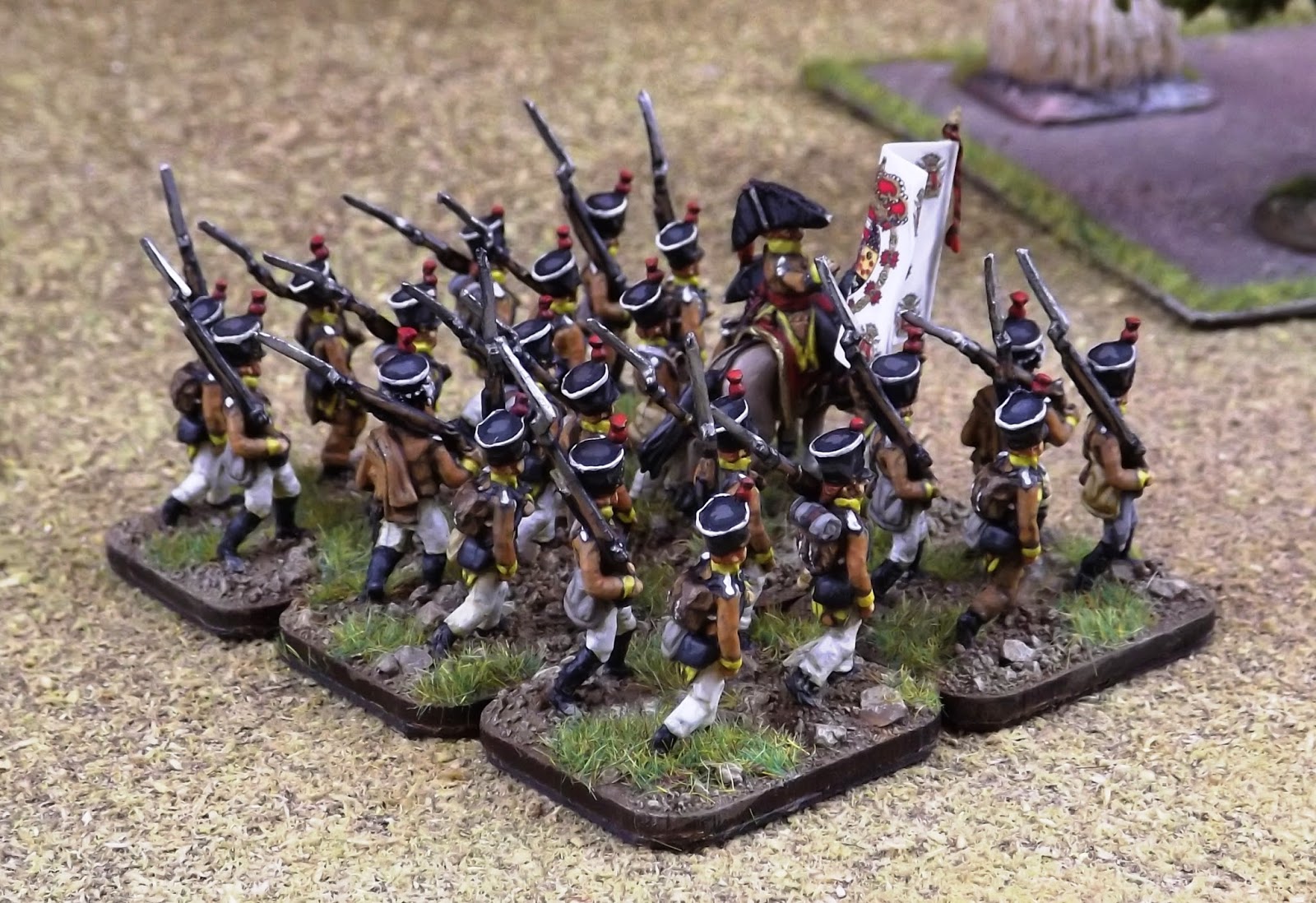 When the Imperial de Toledo took it's place in the line at Talavera, it was a very raw unit composed of young conscripts lacking proper training, mixed in with the survivors of the harrowing defeat at Medellin only four months previously. Little wonder then, that, like the Badajoz Regiment, they too fled after the volley fired at French cavalry vedettes on the evening prior to the Talavera battle. 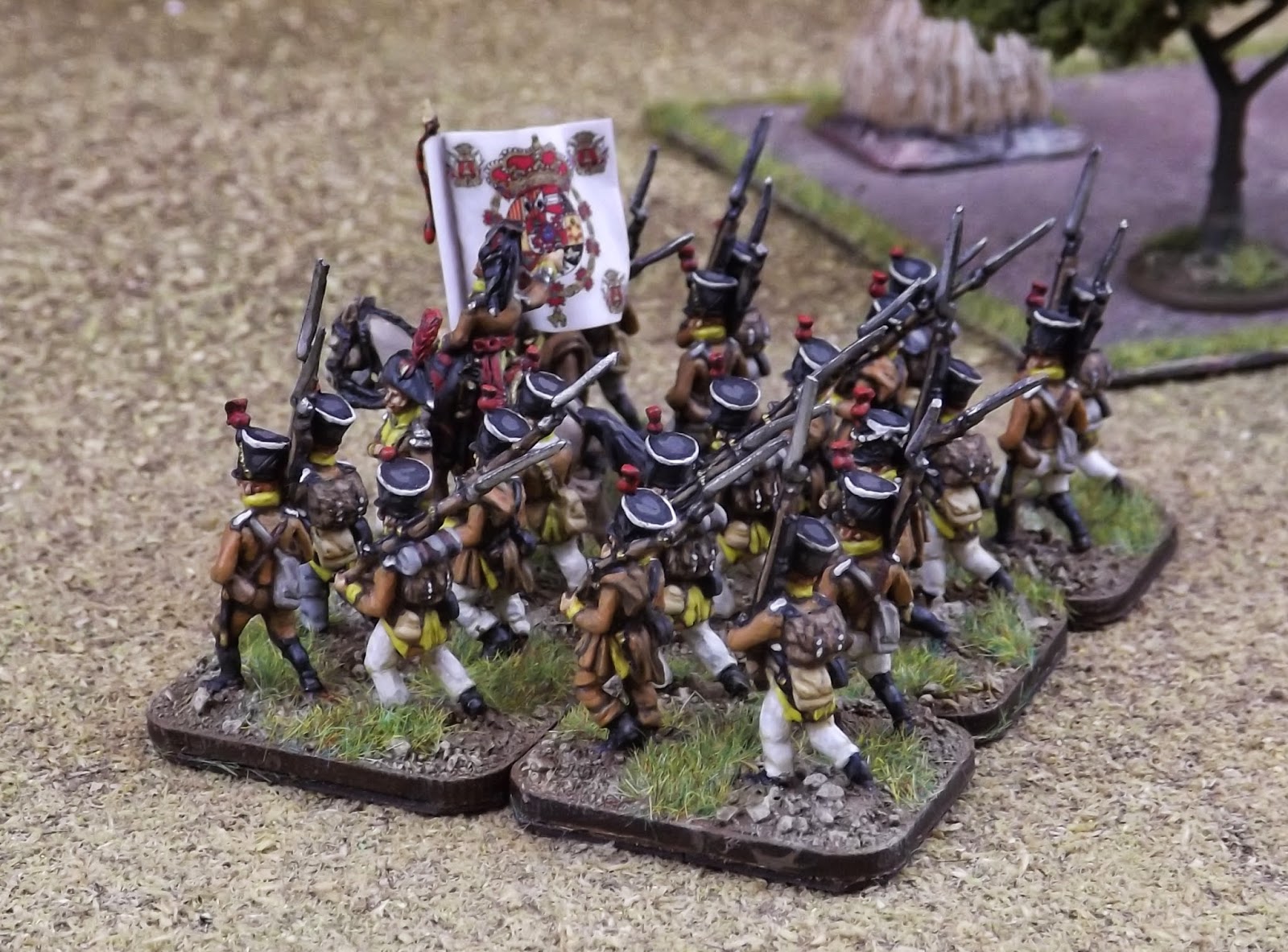 In the second Osprey title on the Spanish troops, Rene Chartrand suggests that the Toledo Regiment were in the brown with yellow facings uniform by 1811, and so my Toledo boys are possibly premature in having the look they do, but with an eye on 1811 and Albuera where the Toledo Regiment re-appear and, as Chartrand states, with them changing to a blue uniform in 1813, I feel justified in going for the brown look to give me a fairly generic Spanish army that will be around in future scenarios.

Interestingly Haythornthwaite and Chappel have the same uniform of brown and yellow illustrated from a portrait of Colonel Don Juan de Gonzalez from Dighton's illustrations entitled "a sketch from Cadiz" dated 22nd June 1813; this when they are supposedly changing to blue. So I think we have to be pragmatic when it comes to illustrating the Spanish forces at any given time allowing for approximate timings of change. It's quite possible that the regiment was looking like a rabble in peasent dress, but given that we have these illustrations of them close to the time we are looking at I am happy to have them thus, and they make a colourful addition to the ranks .

To illustrate the joys of planning and researching the Spanish armies, I put up a couple of illustrations in my post, in January, on the Army of Estremadura that were wrong and the Toledo Regiment was part of the error. The illustrations and colour guide were for the French raised troops of King Joseph shown in their brown uniform and light blue facings. I compounded the error by showing similar illustrations of the Seville and Madrid Regiments. 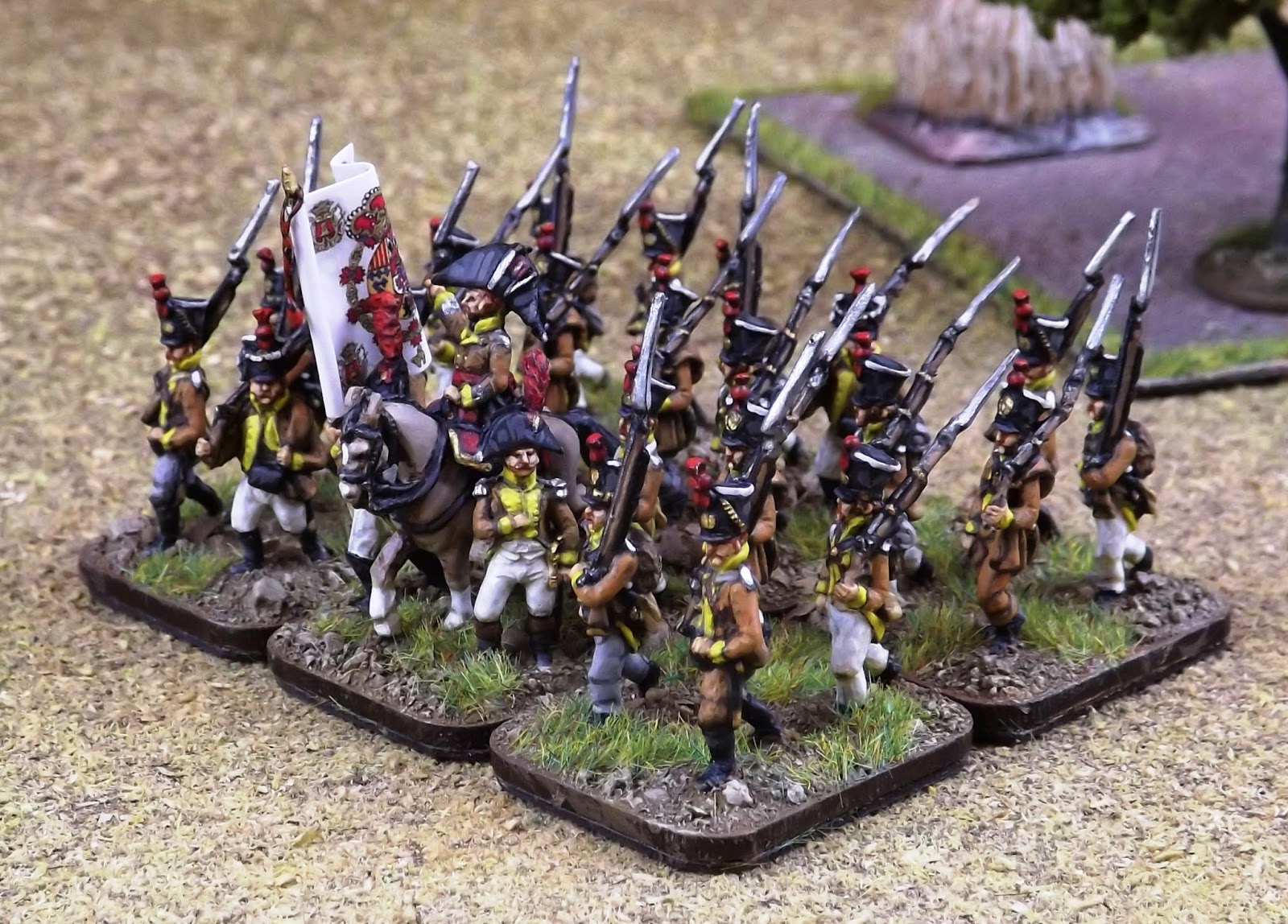 My error stemmed from not properly checking the original document put together by another author and being misled by illustrations posted on another site erroneously portraying them as Junta forces rather than Afransecados. I have updated the PDF to correct those errors. In addition, as a prelude to posting on the Antequera Light Infantry, I have included an illustration of a light infantryman in a shako, of a unit the was with Romana's Danish expeditionary force and will be the look of my volunteer light units.

Next up the action at Casa de Salinas game two and the Antequera Volunteer Light Infantry
Posted by carojon at 01:13