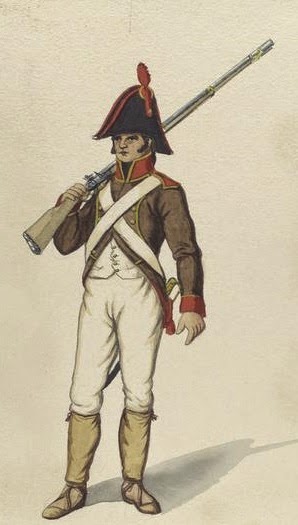 Next unit in General Portago's Division at Talavera was the Provincial de Badajoz, one of two militia regiments in the division. 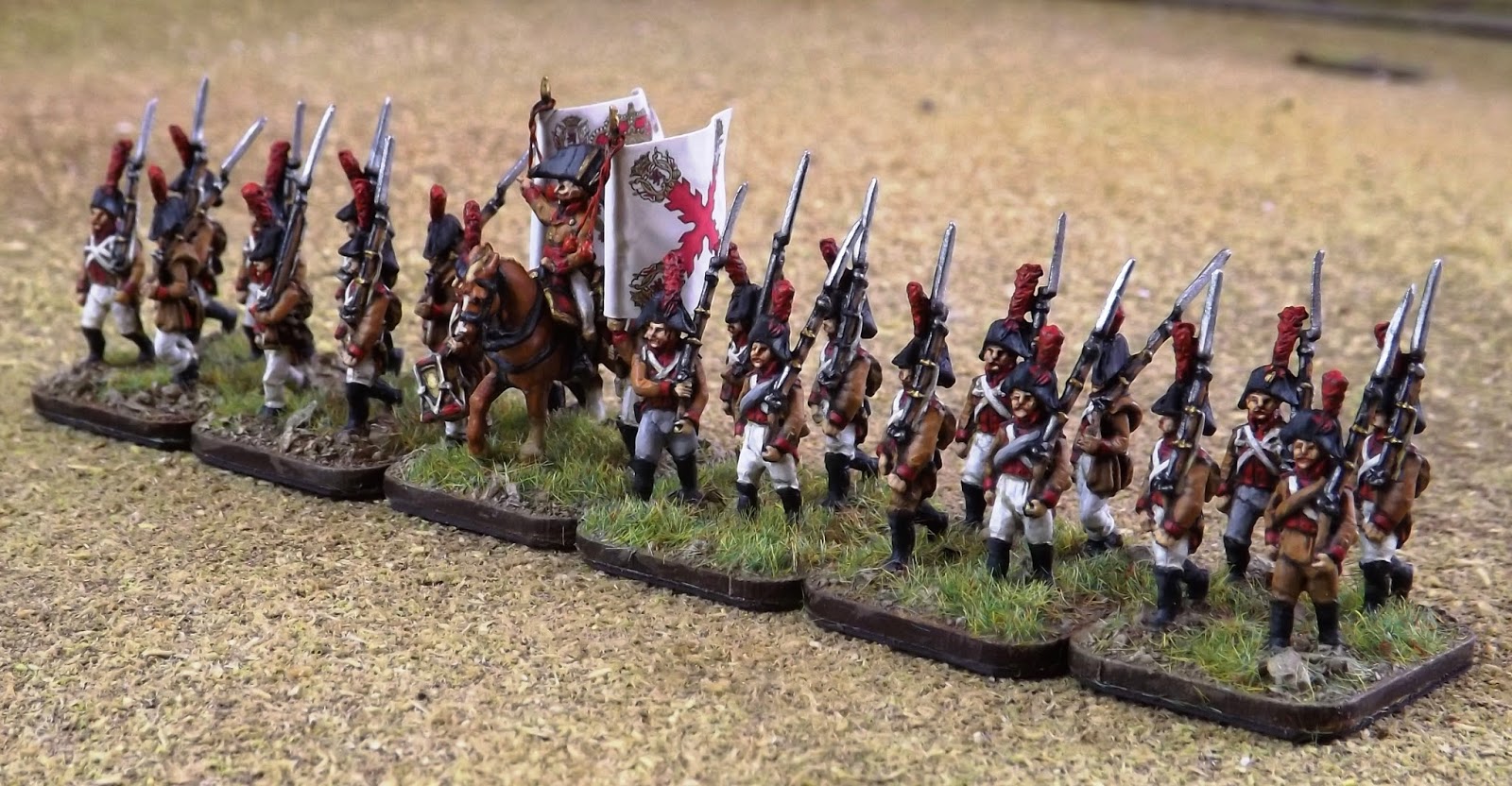 The militia regiments in the Spanish army were, in the main, one battalion regiments and would under the 1806 uniform regulations have been dressed similarly to the regular infantry in a white uniform with red facings on collars, cuffs, lapels and turn-backs. However I was really interested to see Asku's post on his blog GeMiGaBoK, see link below, which suggests that, as in the illustration header, many units went to war in brown jackets.

I quite like the fact that the militia had a lot of units dressed this way as I intend to use it as a way of clearly identifying my militia units from the white coated regulars and so, unless their is a clear reference otherwise, will use this feature to define my Spanish army 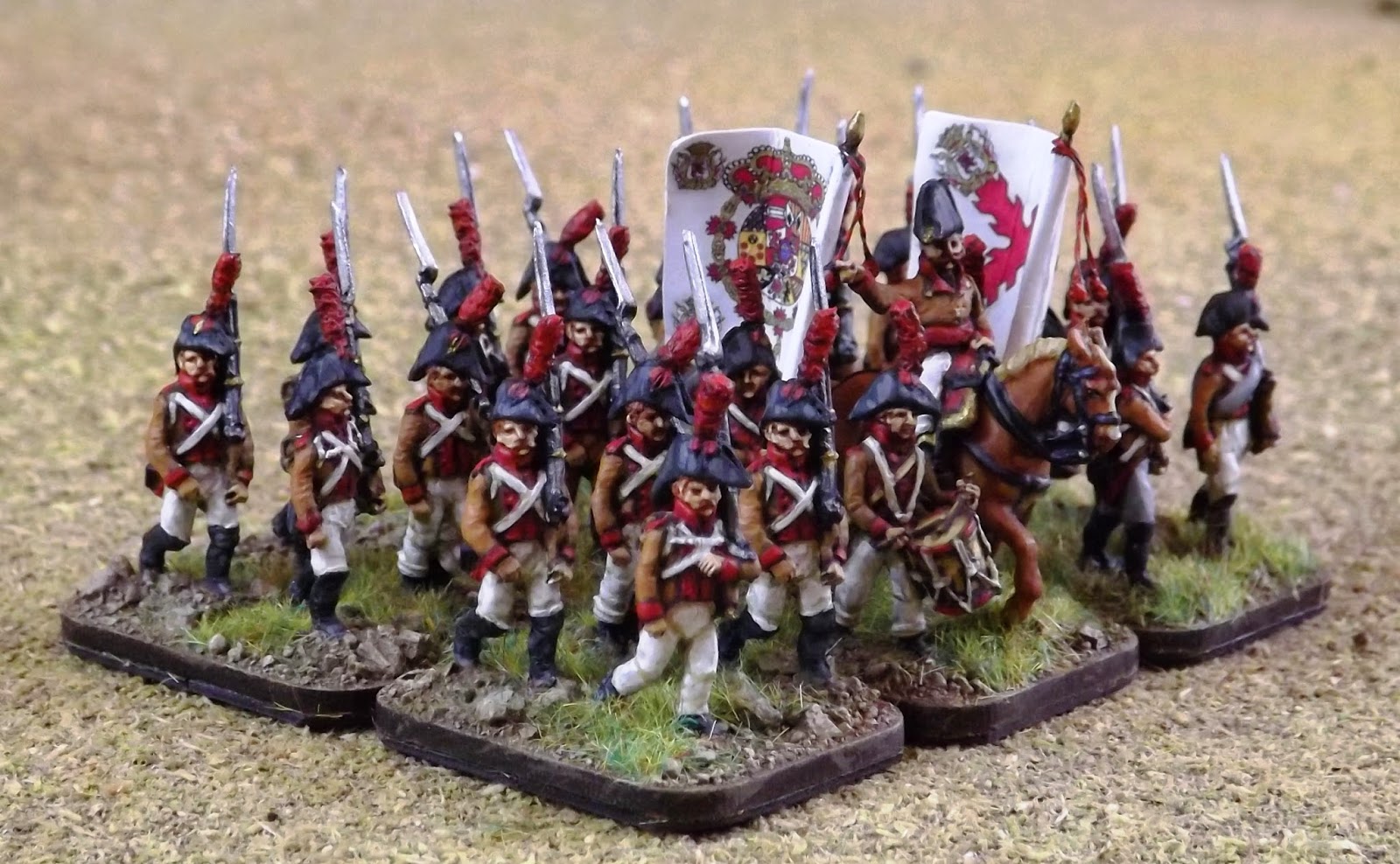 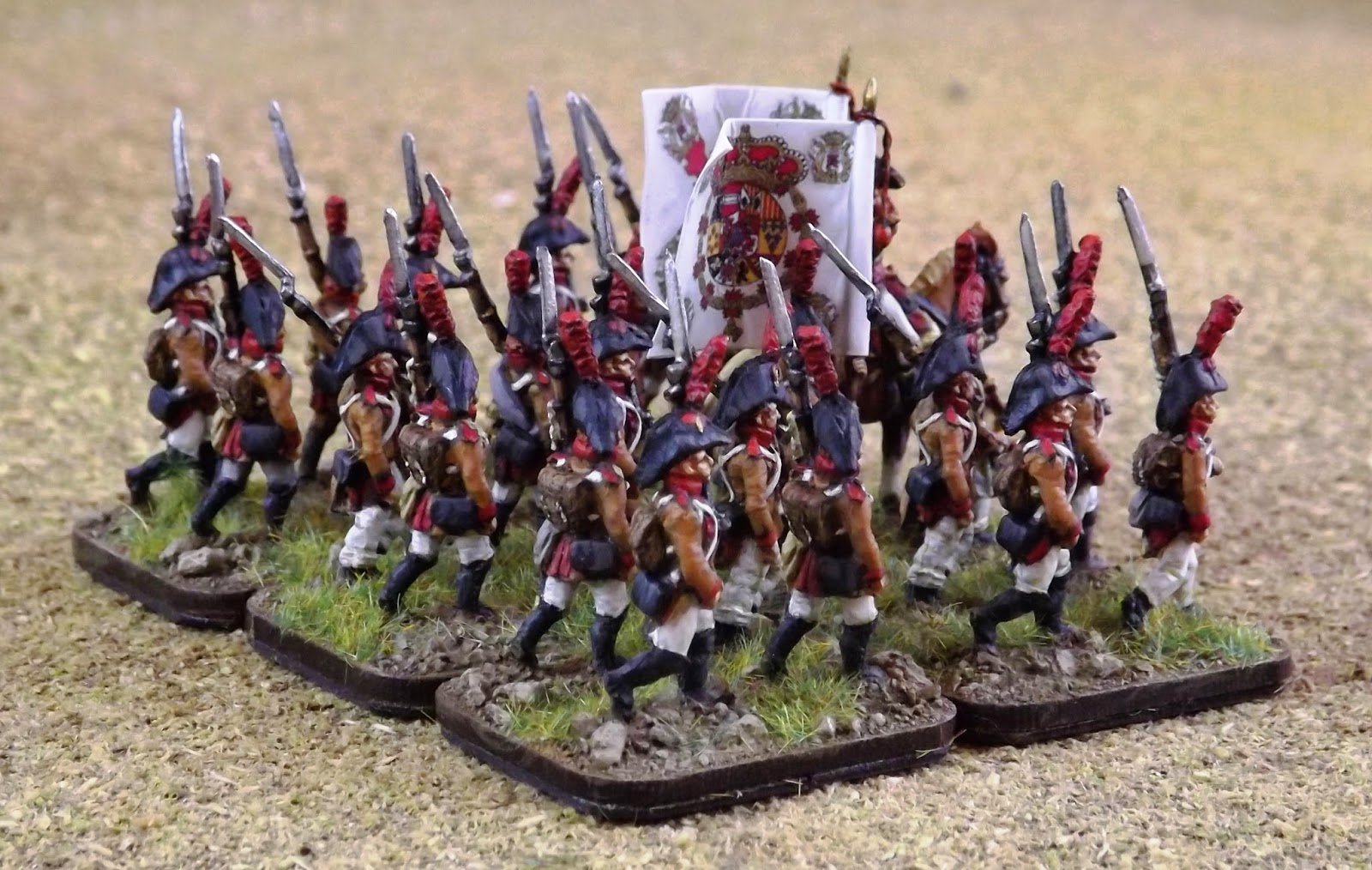 In September 1808 the Army of Estremadura was part of the Spanish national mobilisation following the Madrid uprising in May and the defeat of Dupont's French army at Bailen in July. The French occupation army had fallen back to behind the Ebro and the Central Junta was directing the forming of the various Spanish armies. These various armies were organised and gradually followed the French to the Ebro with the Army of the Centre under Castanos and Galluzo, Blake's Army of the left composed of troops from Galicia and Asturias and the Army of the Right under Palafox and Vives. 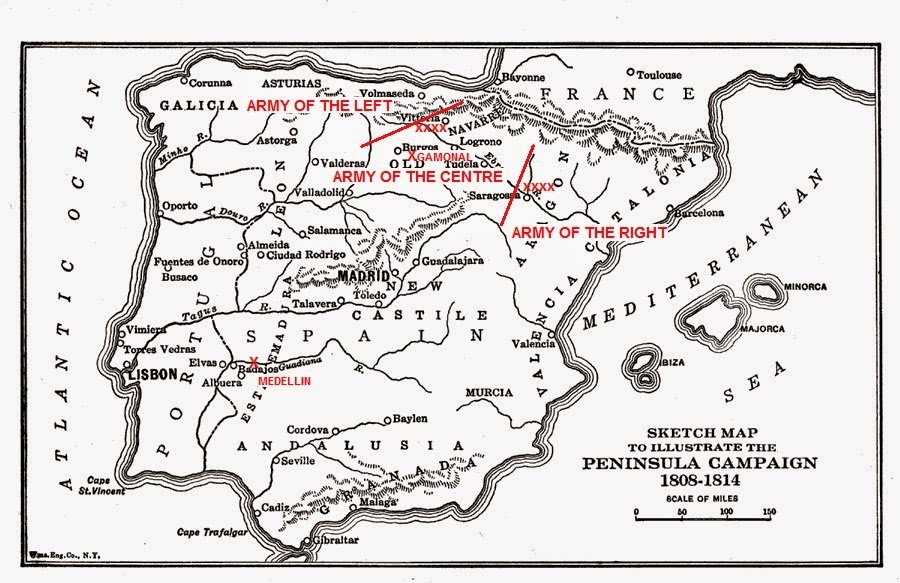 Galluzo's force was tardy in its arrival alongside Castanos, not arriving until October, with the blame being laid at the reluctance of the Provincial Junta in Seville to release the Estremaduran troops for the national cause.

With the inability of the Central Junta to appoint Castanos as overall Spanish supreme commander and thus coordinate a Spanish offensive on a weak French army, the initiative swung back to the French and with the arrival of Napoleon in November and significant reinforcements the Grande Armee numbered over 350,000 men. The French offensive was a masterpiece in swift manoeuvre and the line of the Ebro was soon  pierced.

The Army of Estremadura now under the command of a headstrong young aristocrat, the Conde de Belevedere, following the recall of Galluzo to answer charges by the Supreme Junta, was caught and badly defeated at the Battle of Gamonal (Burgos) (see the post on the Badajoz Volunteer Infantry Regiment). The Provincial de Badajoz as part of the 3rd division failed to move up in time to join the rest of the army and so were spared the worst of its results. 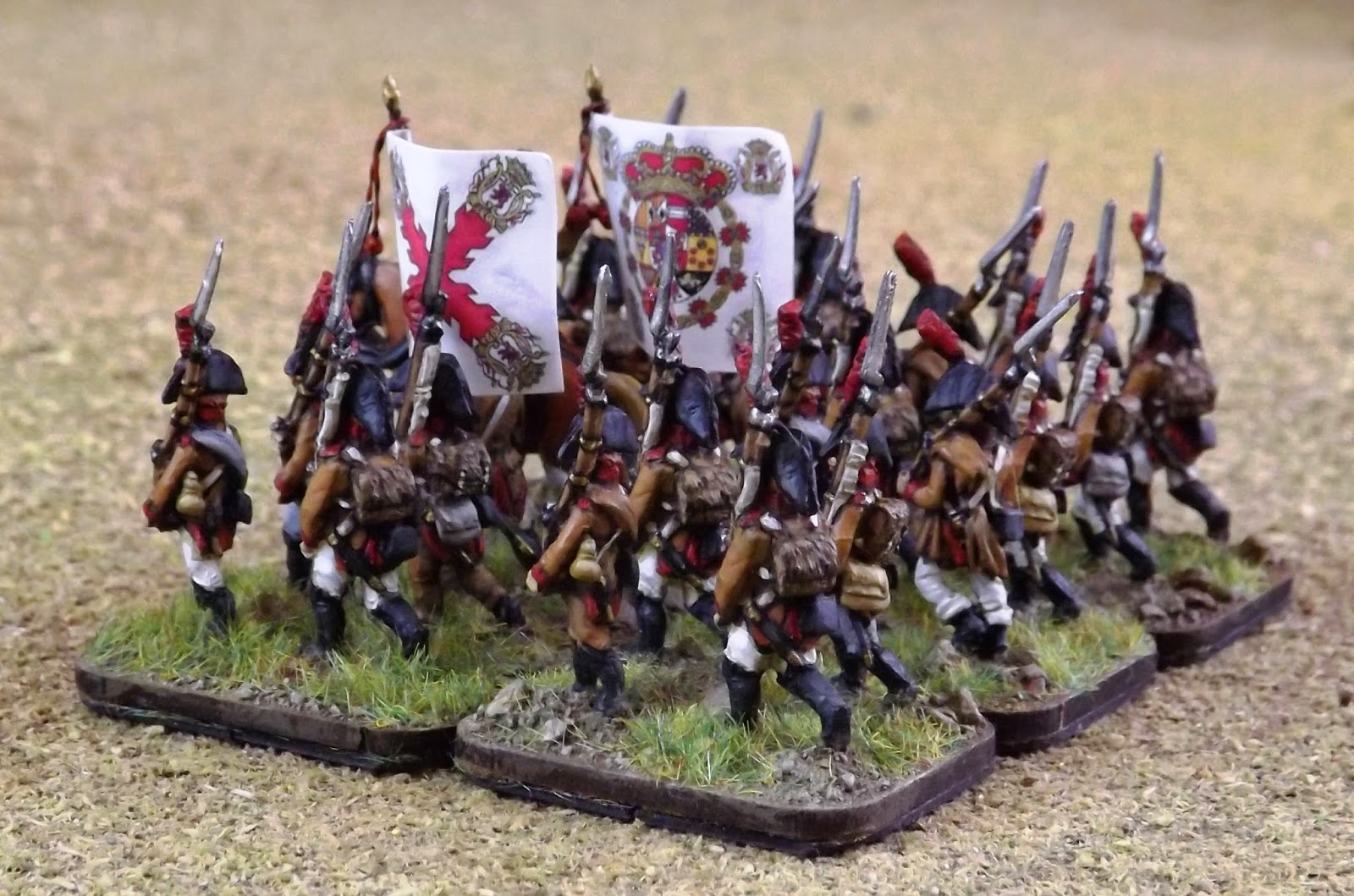 The complete destruction of the Spanish armies was averted with General Sir John Moore's campaign, drawing the bulk of Napoleon's forces away into the Galician mountains as he was pursued back to Corunna.

The Army of Estremadura, was back in its home province by the spring of 1809, facing off against the French forces south of Madrid under Marshal Victor. Like their comrades in the Badajoz Volunteers, we see the regiment included in the order of battle for Medellin in March 1809 under General Cuesta, where they were involved in the defeat by Victor.

On the 4th of April 1809 they are shown with a strength of 500 men and with the Army of Estremadura, forced to retire on their home city, Badajoz, to "lick their wounds" and prepare for the upcoming campaign with a new British army, into the Tagus Valley and the retaking of Madrid. 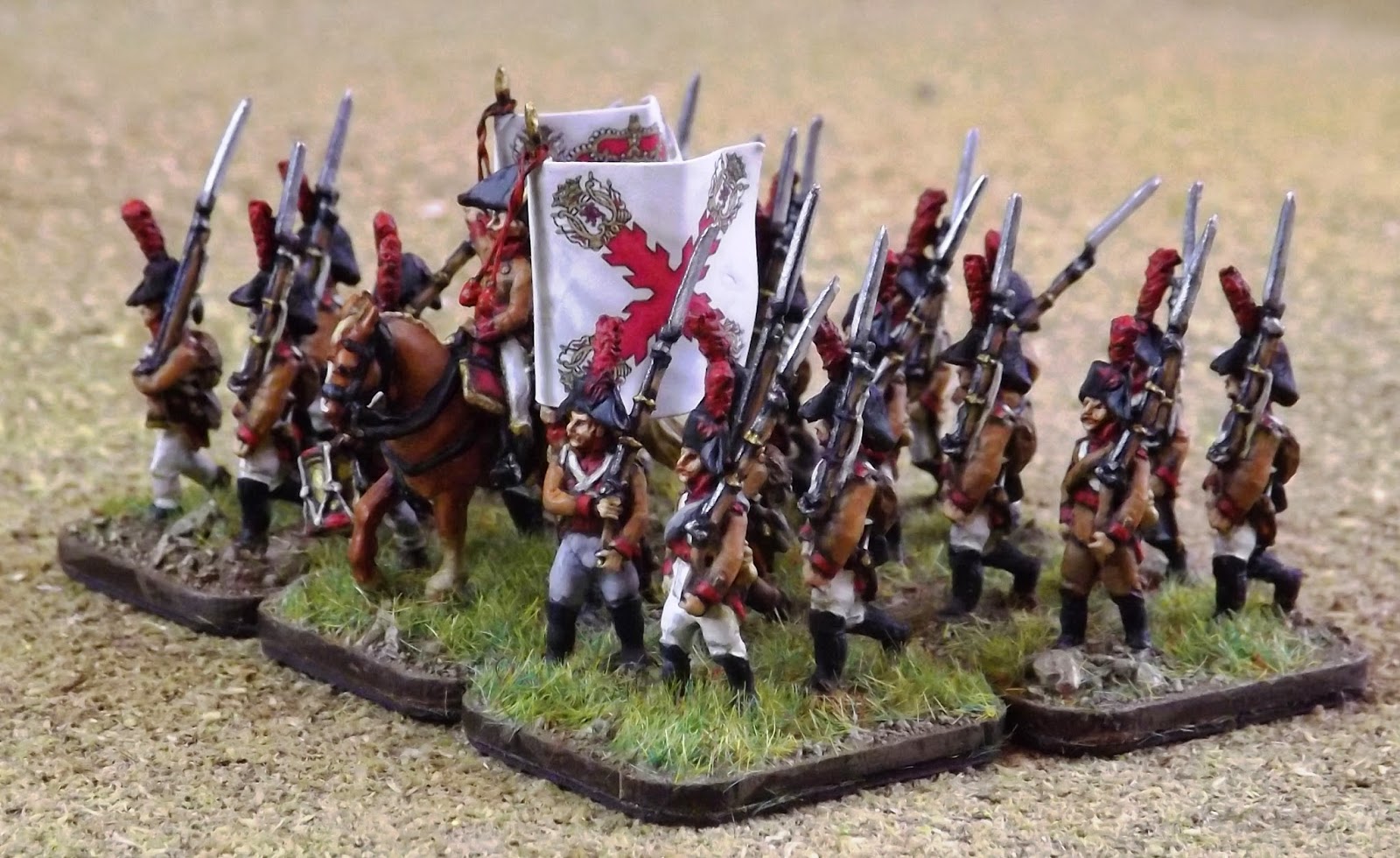 My Provincal de Badajoz Regiment is composed of figures from AB with my Colours from GMB Flags. As a single battalion regiment I have given the Badajoz Militia two Colours, the Coronella and Ordenanza, alongside Colonel Montoya.