Talavera - A Series of Linked Battles 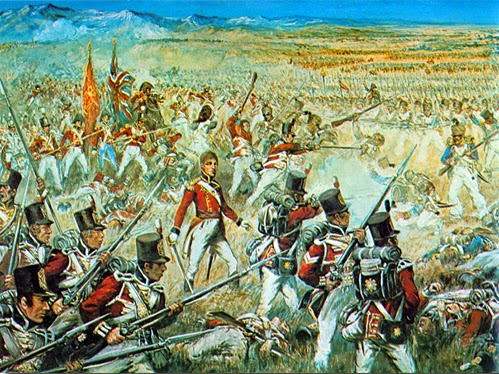 Tonight will see the second play test of the Casa de Salinas scenario, with an AAR to follow this weekend. I like to try out different ideas with each test game, and tonight we will be using an order of battle generated from a list of all the units present at Talavera on the eve of the battle, with the idea of using this game to set up a series of linked scenarios.

On the lead into the Talavera project I discussed the plans back in May 2014 with a general outline of the models I would work on and the games I would do to capture the events of the battle.
http://jjwargames.blogspot.co.uk/2014/05/talavera-plans.html

This outline plan took a step further when I reviewed the campaign as a whole, by which time I was well into the orders of battle for both the Allies and French.

It is quite clear that the battle is composed of a series of actions occurring in the space of two days with the climax reached on the afternoon of the 28th July with the almost all out assault on the British centre/right of the line and sputtering out with the debacle of the charge of the 23rd Light Dragoons in the northern valley on the British left. The map below helps to illustrate where the principle clashes occurred. 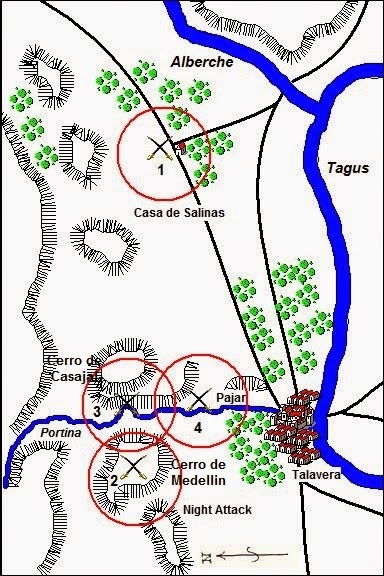 As you will know, I like to use my wargaming to try and model the events of the historical action whilst having the fun of the game, not knowing what might occur in our refights. One of the great benefits of using C&GII is that it offers gamers, the opportunity of creating the forces involved as a master list order of battle that can provide units for individual scenarios that form part of a whole linked series. The casualties and morale effects can be carried from one scenario to the next and thus help create the whole two days of combat, fatigue and casualties.

I haven't been able to use this facility with the battles recreated so far, but Talavera presents a whole new challenge, and so I have built a series of four games scenarios that can be played separately as stand alone games or as part of a series of linked battles.


It seems clear from the series of actions that Marshal Victor, in particular, was unimpressed with the British army that confronted his veteran forces on the 27th and with the two actions on that day he looked to take a moral ascendancy over his enemy by inflicting loss of casualties and confidence by attacking them when they least expected such an attack and when a more experienced force would have been better prepared. In addition, in the night attack he attempted to turn the whole allied line out of a strong position and leave it exposed the next day to being broken into its two parts and harried across more open terrain, better suited to his cavalry reserve.


The dawn attack that heralded the beginning of the battle on the 28th July was a formula that had been used with incredible success against all other major European armies to that date, and there seemed no reason for it to fail this time. When it did fail, Victor put the repulse down to lack of support and failing to stretch the defences enough to ensure success. It seems that Joseph and Jourdan were less sure of this diagnosis, but with news that Soult would not be appearing behind the allies for at least a week and that Madrid was threatened by the advance of Venegas' Spanish army to their rear. they somewhat reluctantly agreed with Victor's plan of attack in the afternoon to break the Allied army before dealing with the other issues.

Thus with these parameters outlined I have put together the four actions with the principle forces involved operating under the plans constructed by Victor and his staff. The objectives will mirror those plans, and will encourage the players to pursue a policy of striving to win each game and build a pot of victory points that will have a bearing on the outcome in the final scenario. In addition the attrition caused in each will be in effect in the following games.

As it stands at the moment, I have constructed about half the units needed for Scenario 4. All are done for Scenarios 1 and 2, with just a few needed for 3, so I aim to post on the play test games as we work towards the big game. Once all the scenarios have been thoroughly play tested I will release the work.

I should add that in addition to working these games up for C&G in particular, the nature of scenario design today is to make them user friendly for other rule sets and I plan to consider ways of carrying forward the attrition aspects of each game with other rules in mind. However with the units based on real numbers of men and a broadly generic morale rating, they should be easily translatable anyway.

The test for linking these games begins with the second playing of Casa de Salinas where the order of battle for both sides is taken from the master list of units involved in the battle as a whole and I will be transferring them back into it prior to moving on to the Night Attack scenario.

As always, feedback and comments welcome.
Posted by carojon at 01:00