The next unit completed as part of General Portago's 3rd Spanish Division is the 2nd Antequera Infantry Regiment of Volunteer Light Infantry (Cazadores). 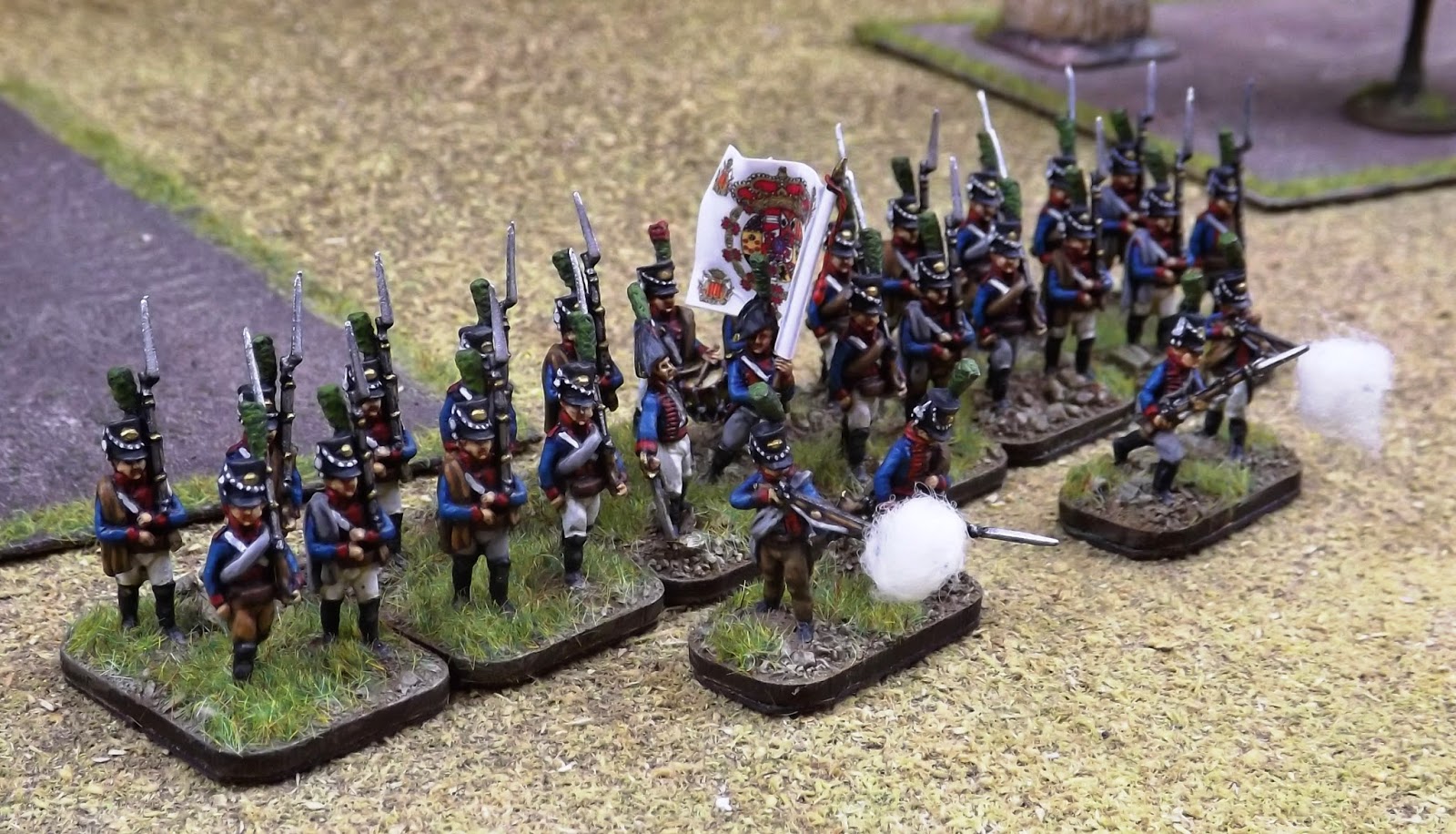 The city of Antequera is located in the heart of Andalusia and can trace its origins back to Roman times. Even today it is an area popular with hunters of small game and wild boar, so perhaps it unsurprising that a unit representing the city in the Spanish order of battle should be a cazadore (light infantry) regiment. 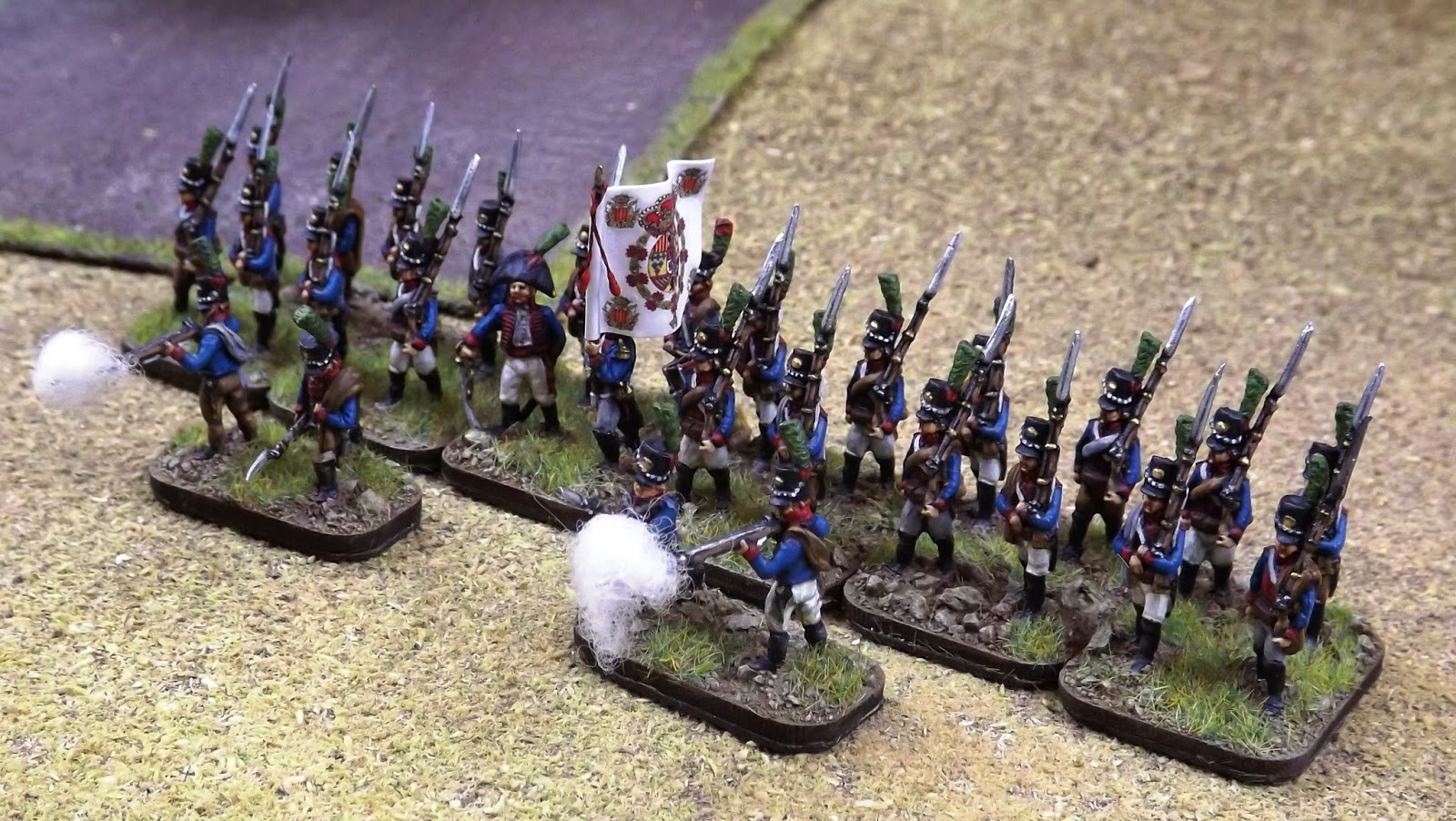 The Cazadores de Antequera Regiment, consisting of two battalions were formed in September 1808, according to Esdaile and were still on the lists of the Spanish regular forces in 1814, although their first battalion was lost with the surrender of the Figueras garrison in July 1811.

*(Note see the comments on the post about the Imperial de Toledo, link below, where Teodoro Reding points to their origins being based on the 6th Volunteers of Granada where they were in action at Mengibar and Bailen in 1808).

The 1200 strong Antequera Regiment appear in the order of battle for the Battle of Valls 25th February 1809 as part of Marti's division under the command of General Reding with a force of 11,800 men. 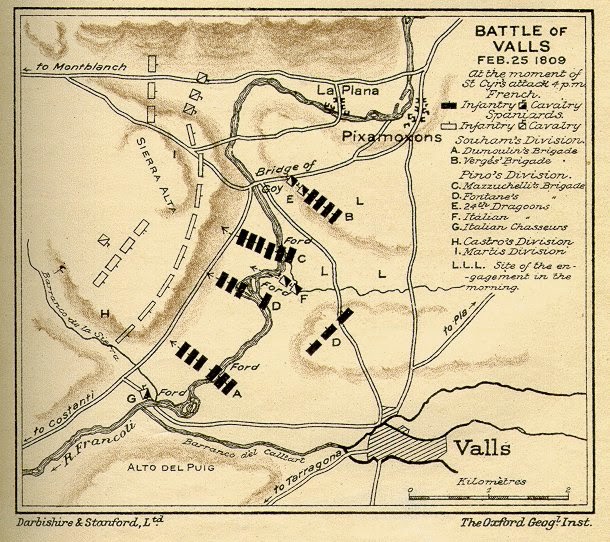 On 28th March they are shown as part of General Henestrosa's vanguard division at the Battle of Medellin where Oman shows the Antequerans with 893 men. On the 12th of April 1809 the 1200 strong regiment is recorded as detached from the Army of Granada and under orders to reinforce the Army of Estremadura joining its 3rd Division and presumably falling back on Badajoz with the rest of Cuesta's badly mauled army. 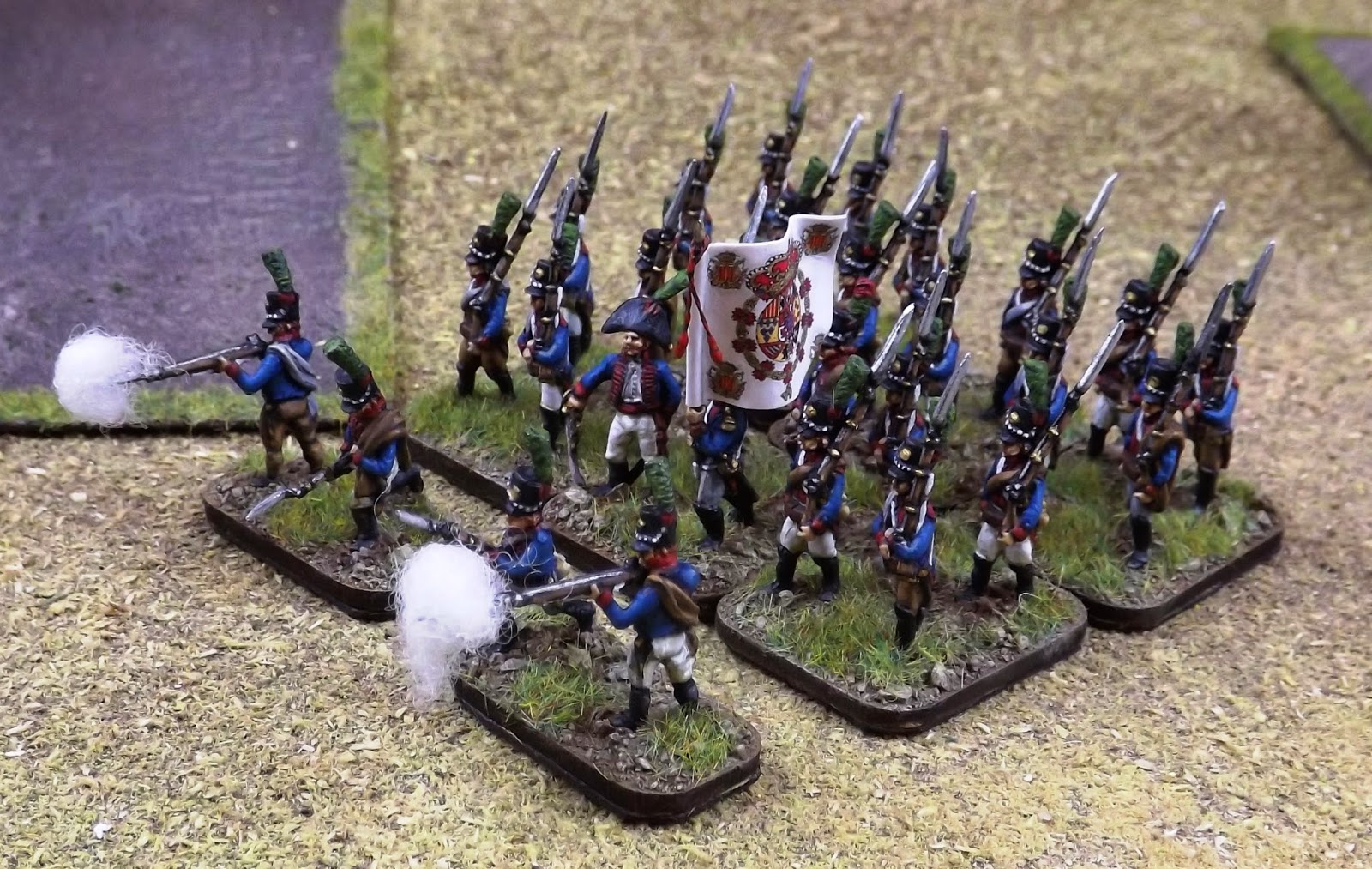 Thus by the spring of 1809 the regiment had seen a lot of action with the French, all be it with little success to show for it and it would seem that they would have had a cadre of experienced troops mixed in with a larger cohort of new conscripts. 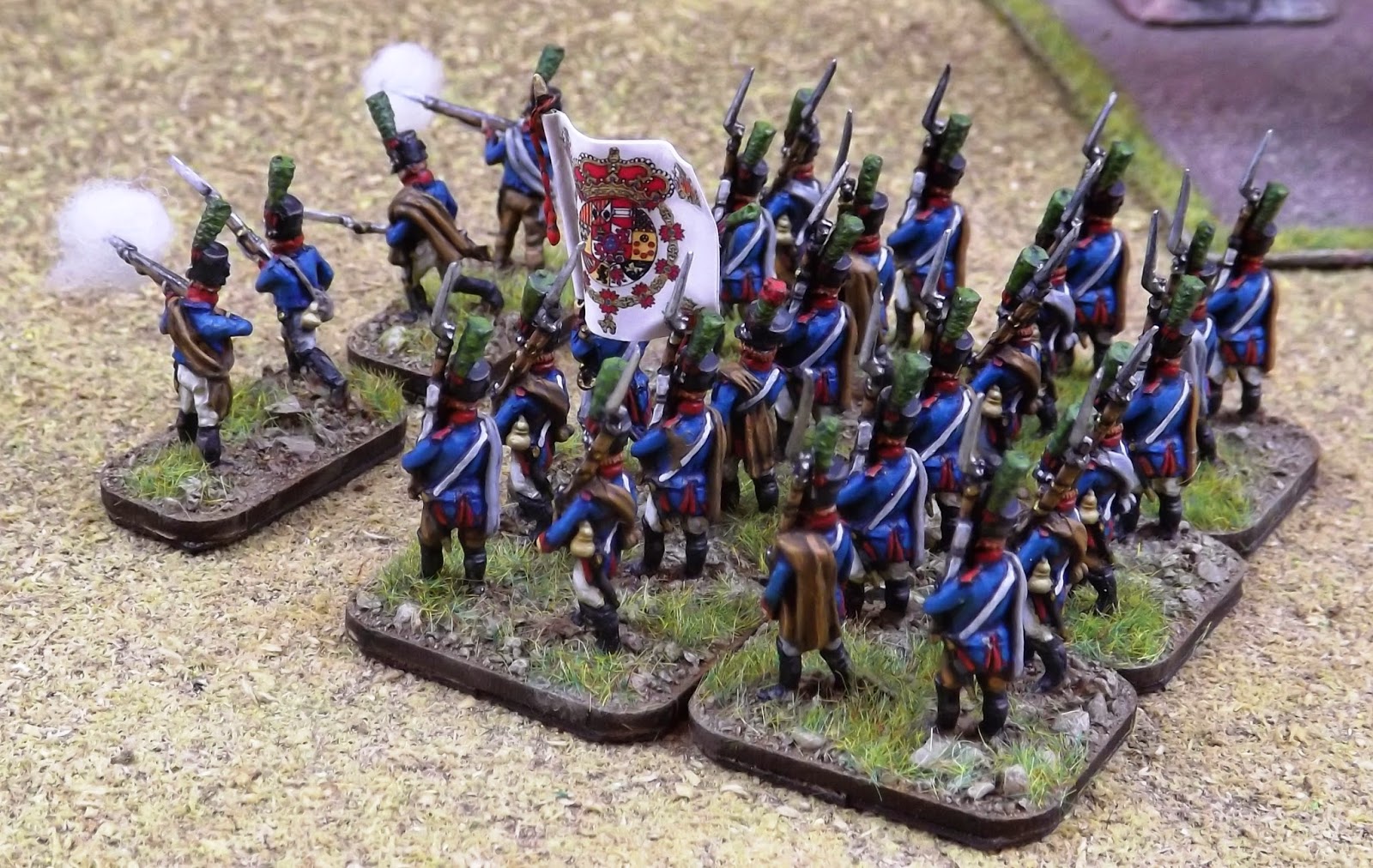 The look of the Antequerans is unclear to say the least and thus the wargamer is forced to make choices when modelling them. I have gone with producing a unit using the new look light infantry uniform that has the men in shakos with the light infantry green plumes. I doubt they were this uniform in appearance and I would again point you towards Teodoro Reding's points about the likely supplies of uniform stocks available to the unit during its formation as being bell topped shakos and top hats. 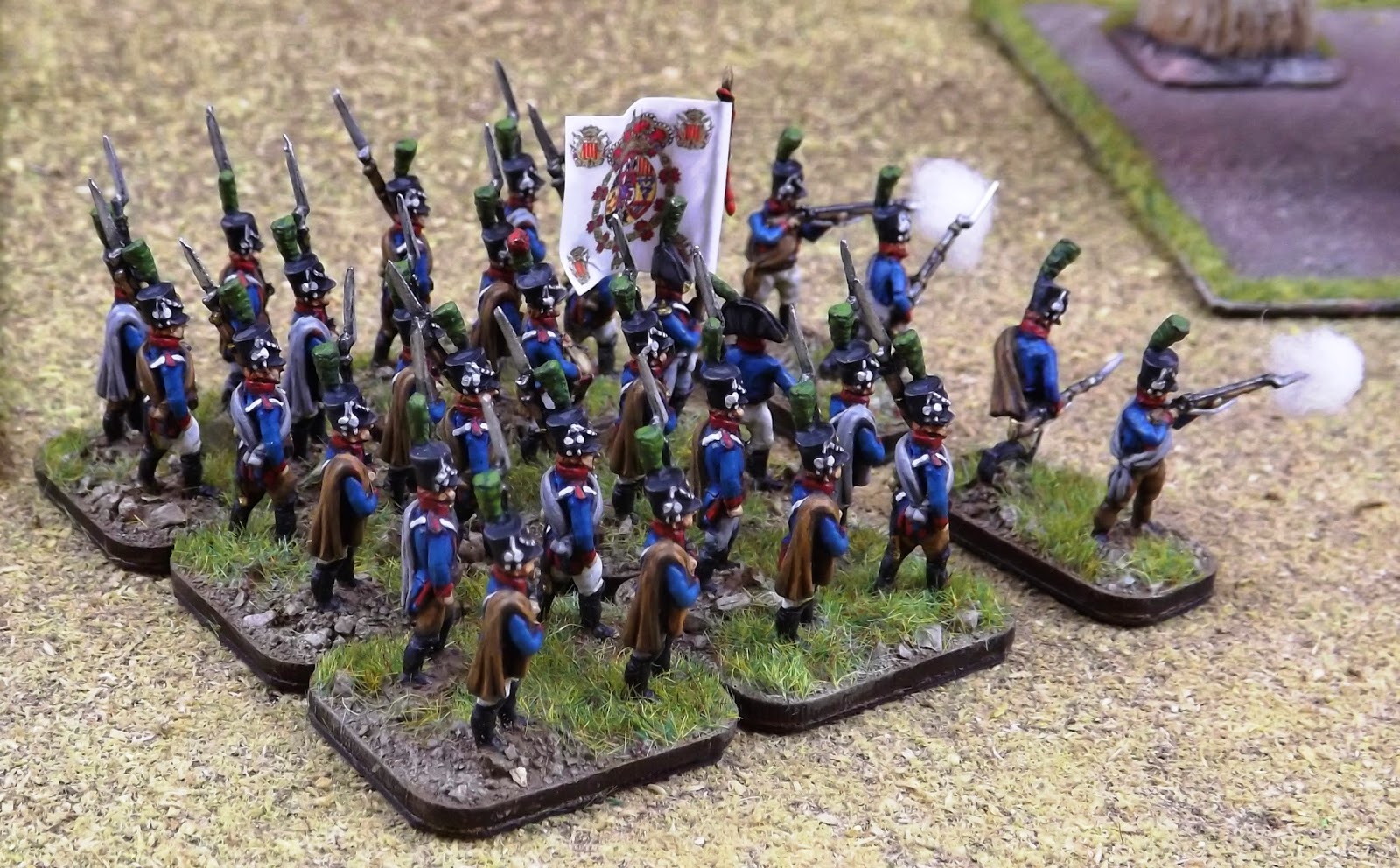 In the end it comes down to a choice and as I am wanting to give my army a look of the Spanish forces as a whole as much as one based on the limited references available for the Estremadurans in 1809, I have, for the time being, decided to refer to this battalion as my tribute to the Cazadores de Antequera. The greatest tribute to pay the unit is that all the battle experience they gained allowed them to stay formed as a regiment on the Spanish order of battle right to the end of the war in spite of the defeats suffered by the various armies they were part of. 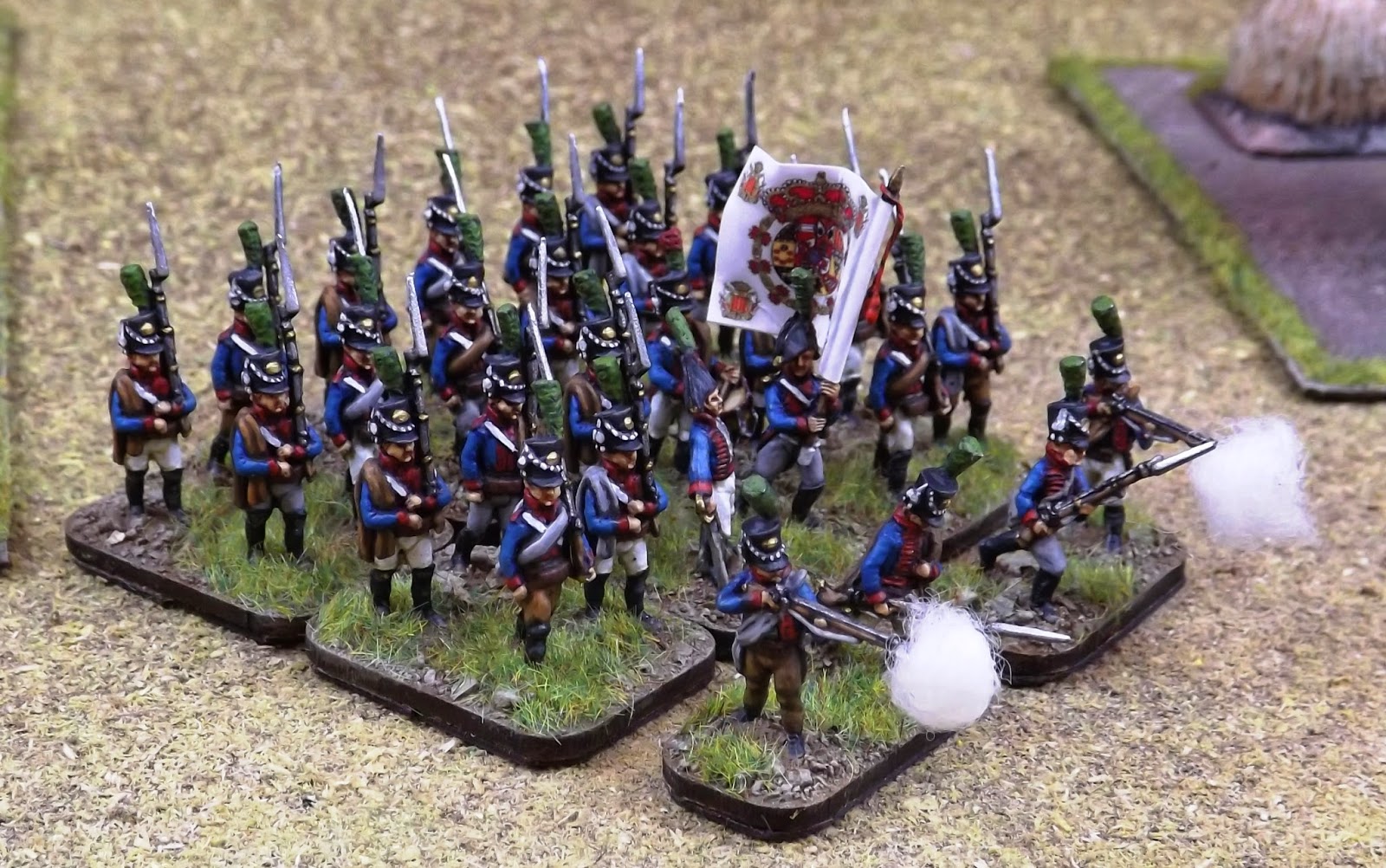 My regiment is formed using figures from the AB range, with scratch built skirmishers with head transplants and the Colour is from GMB Flags.