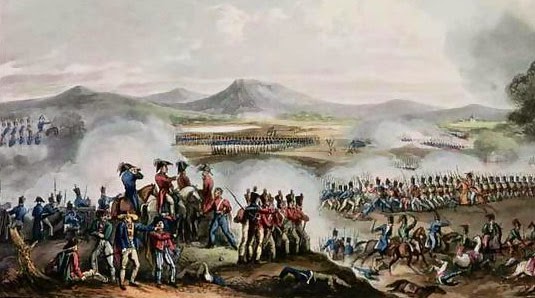 With the completion of the Casa de Salinas play tests, the Talavera game plan moves on to the next two scenarios, which take place on field of the main battle.

The night and dawn attacks made by Marshal Victor on the 27th and 28th of July were focused on French attempts to gain control of the feature that dominated the battlefield, the Cerro de Medellin.

I thought I would set the table up as if I were doing these two games as stand alone scenarios, and thus I have just set up the terrain for the northern half of the French and Allied lines.

The contours shown are 100 foot intervals, with the Medellin above and overlooking the lower height of the French position on the Cerro de Cascajal. 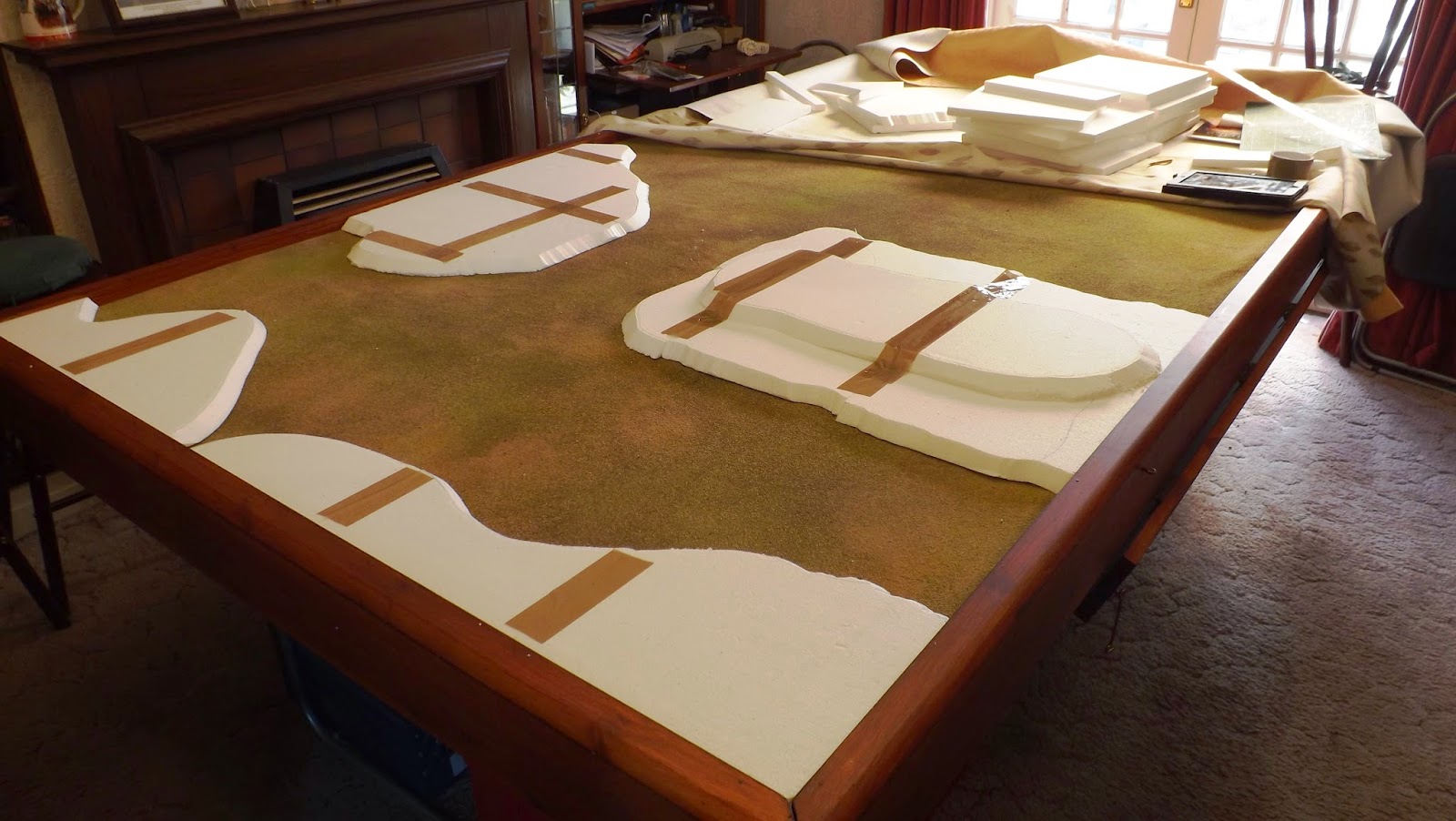 These are my contours constructed as per the map and they are taped together and then pinned to the foam board that underlays my gaming mat. To smooth out the levels into a more realistic slope, I simply place a heavier felt cloth over them before replacing the mat over the top. 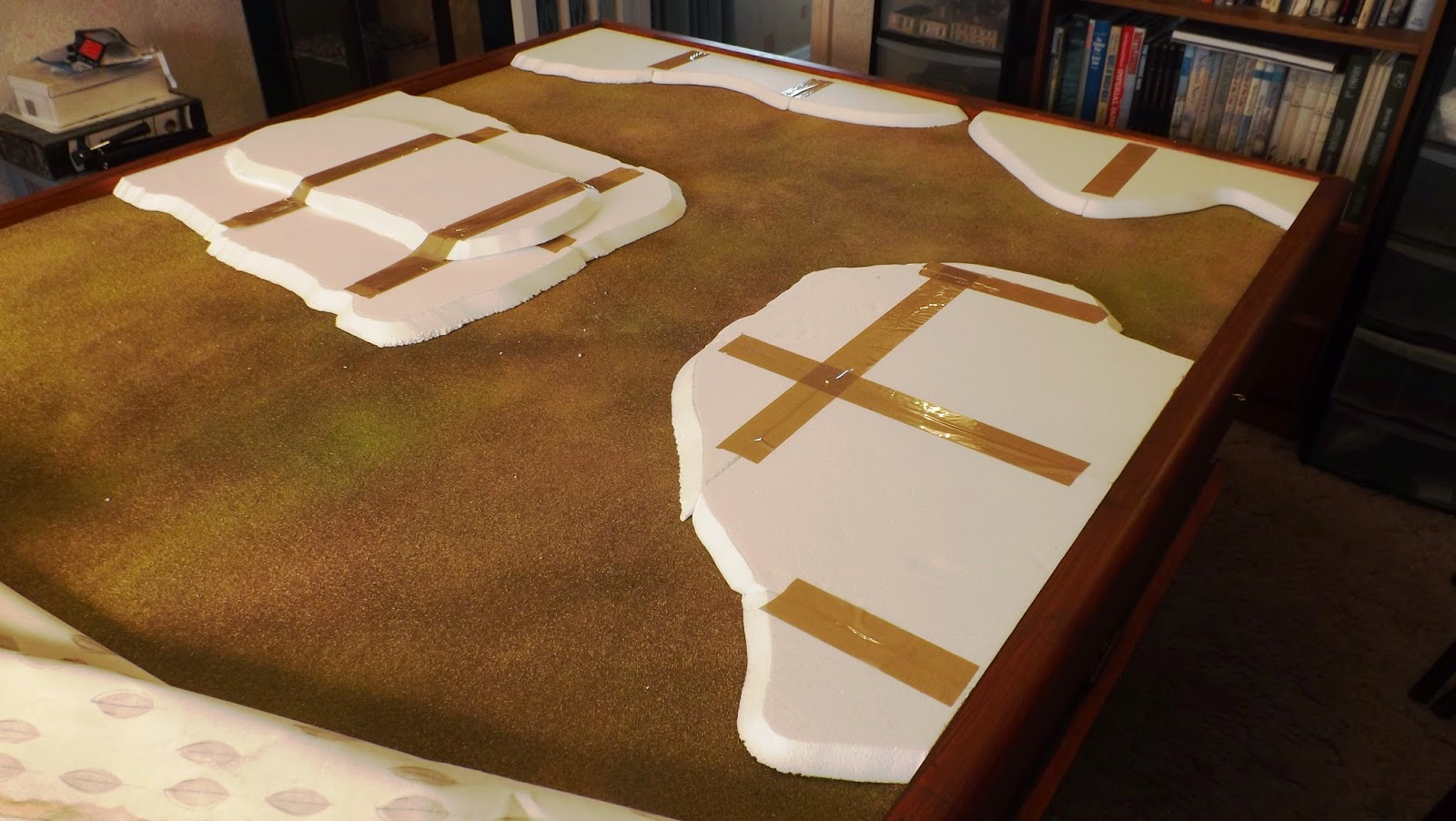 The next stage is to lay out the road and Portina brook, with the brook being pinned to hold the mat down in the bottom of the valley between the two slopes, thus emphasising the gradient. In time I intend to add a few rocky outcrops to capture the rough terrain, particularly on the Medellin.

Fighting the battle in 18mm means that I can include the northern valley when we do the full battle, and using a few strategically placed areas of broken ground to show the treacherous nature of the terrain, should anyone think of planning a reckless cavalry charge, I have again been able to pin the bottom of the valley floor. 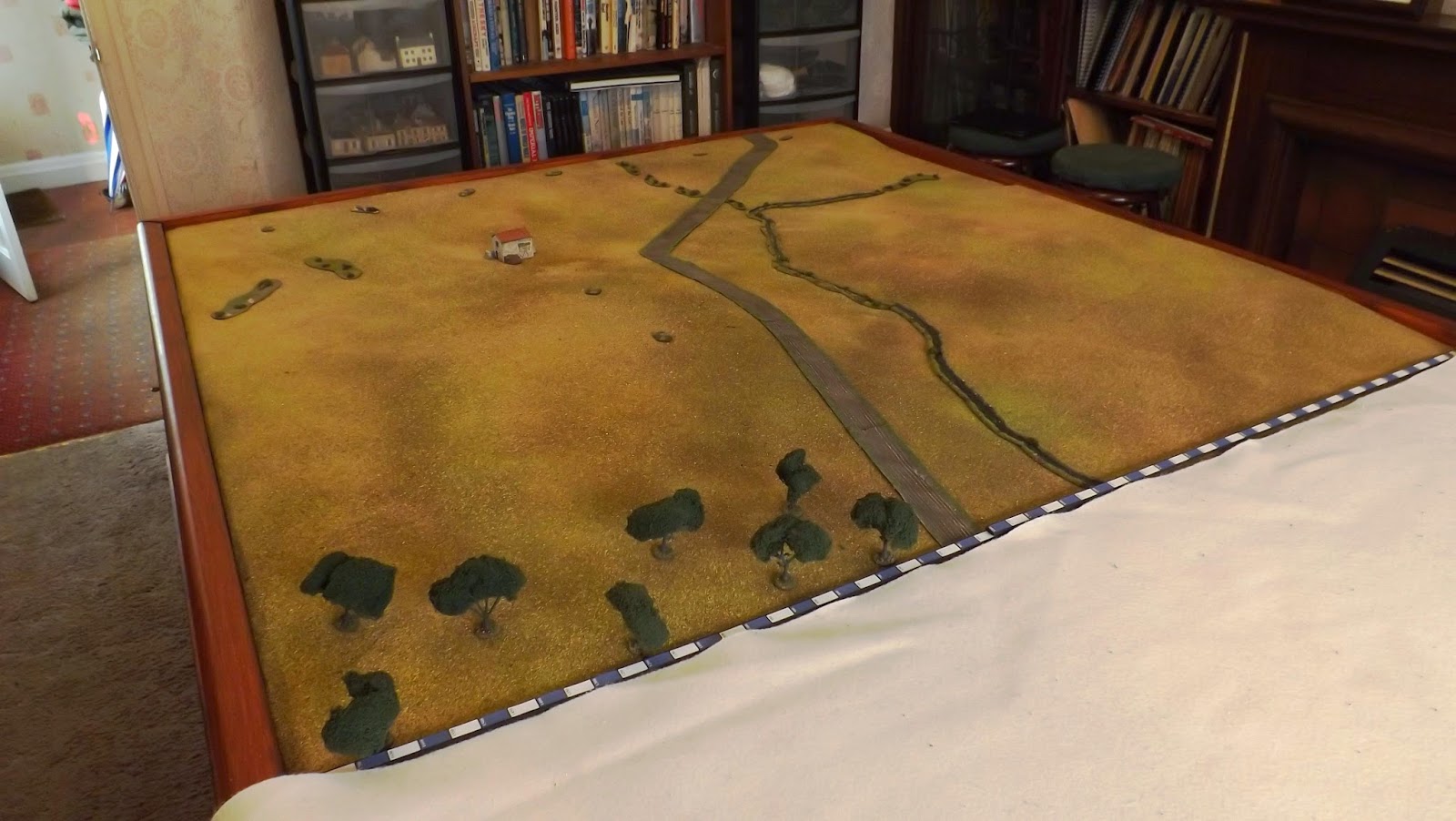 Nestling on the lower northern slope is the ruin of Valdefuentes Farm, with the lower slopes of the Sierra de Segurilla bodering the northern limit of the valley, where Bassecourt's Spanish infantry operated in the afternoon of the 28th July. 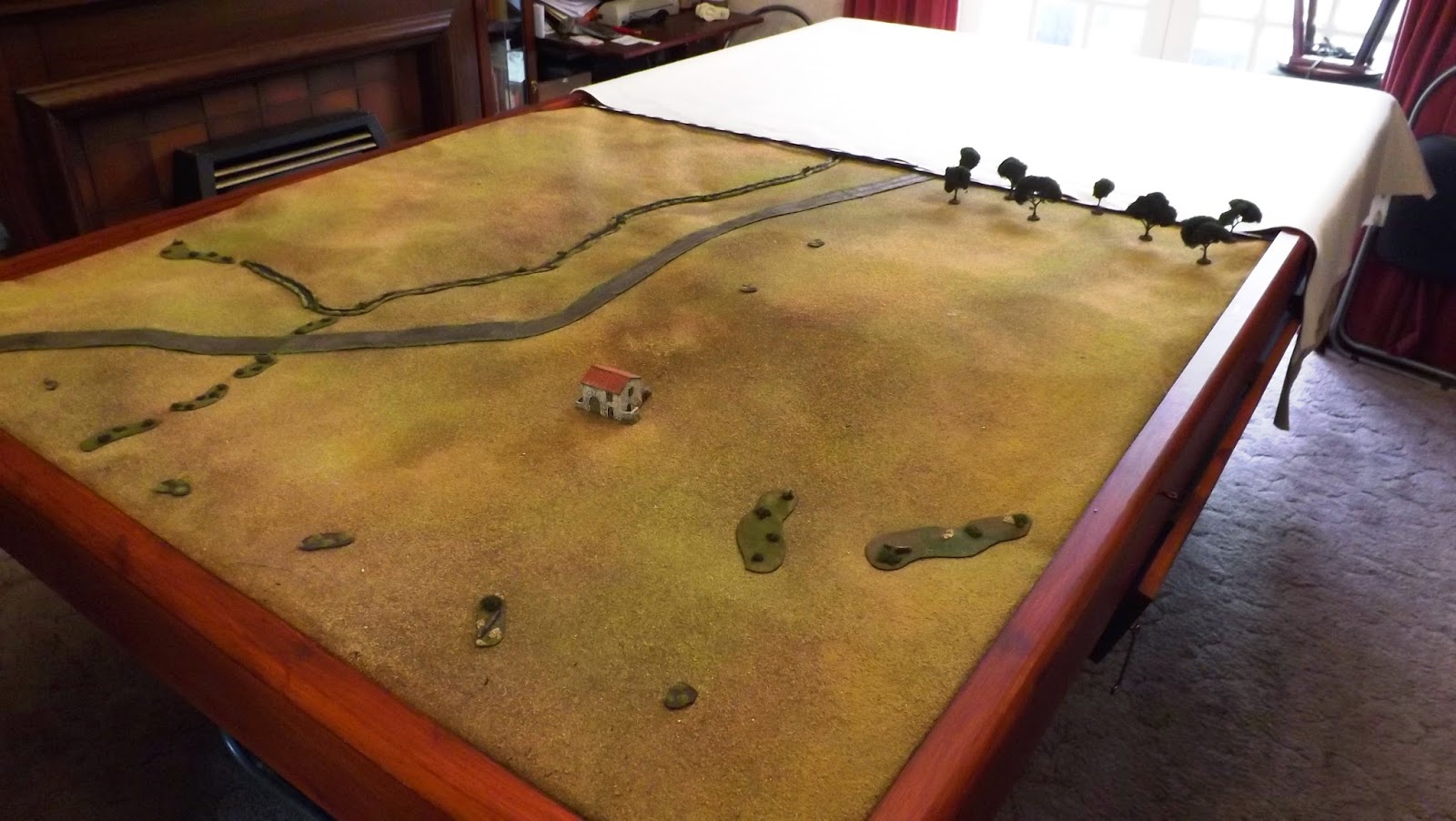 The top of the Medellin has two specifically placed little rough ground markers behind which is the military crest, should the British chose to step back and avoid the worst of any French artillery fire. 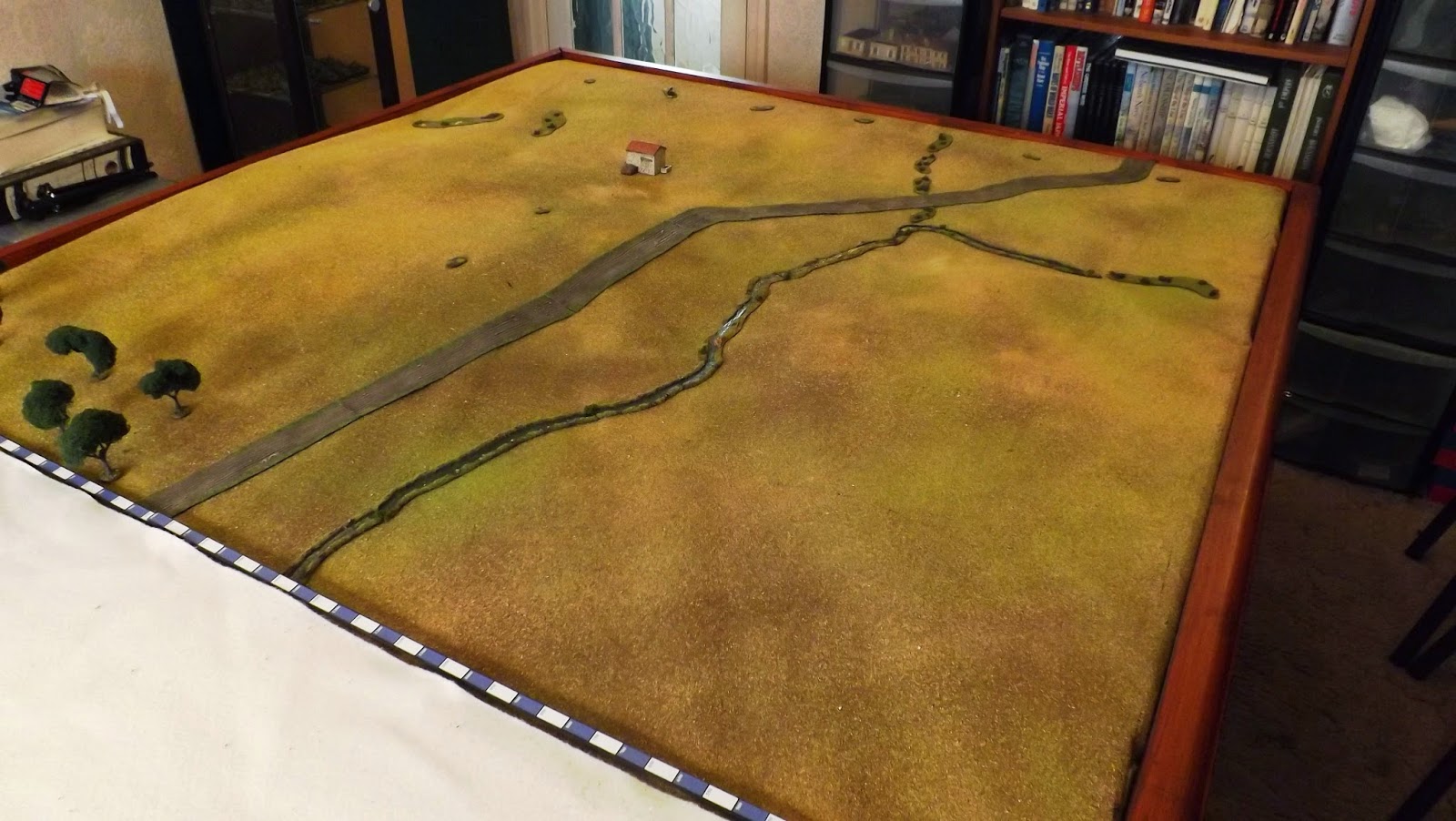 I really enjoy setting up a new table and trying to capture the look of a given battle, and there is a feeling of excitement when the map gets translated into the terrain. With the orders of battle needing some slight adjustments and the figures in the tin ready to go, I just need to get some dates arranged to play the next scenario, Night Attack - Talavera.

Next up the Badajoz Militia
Posted by carojon at 09:04