Poland is one of those countries that, over the centuries, has found itself in the unfortunate position of being surrounded by powerful neighbours often seen by them as a buffer between opposing power blocks and a useful possession to supply manpower and wealth. This position has often led to its partition and forced Poles into a struggle for unification and recognition of its borders.

Such a partition between powerful neighbours occurred in November 1795 when the country was divided up between Russia, Prussia and Austria and its King, Stanislas Augustus, forced to abdicate and an early retirement in Russia.

France, alone, opposed this partition and became the natural refuge for Polish exiles and a recruiting base for the nucleus of Polish legionary units fighting for France against the occupiers in the years following.

The culmination of the rise of Napoleonic France reached its pinnacle with the defeats of Russia, Prussia and Austria in the campaigns of 1805, 1806 and 1807 and the signing of the Treaty of Tilsit between Napoleon and Tsar Alexander of Russia and King Wilhelm of Prussia on a raft moored in the centre of the River Niemen.


One of the results of the treaty was the creation of the Grand Duchy of Warsaw under the nominal control of the King of Saxony, not quite the position the Poles had struggled for over the years, having pressed Napoleon for the reconstitution of an independent Poland set up on the borders of 1795. The creation of the Duchy, though not meeting the expectations of Poles was to prove a future source of tension between France and Russia and one of the principle causes for a return to war between the two empires in 1812.


A new Polish army of about 40,000 men was established under the command of General Poniatowski constructed on the French model and contained twelve infantry regiments each of three battalions, seven cavalry regiments and three artillery battalions each of four batteries. The new army incorporated units from the former Legion du Nord but saw the former Italian Legion left separate from the Duchy's army and renamed the Legion of the Vistula consisting of three infantry regiments of three battalions and an uhlan (lancers) regiment. 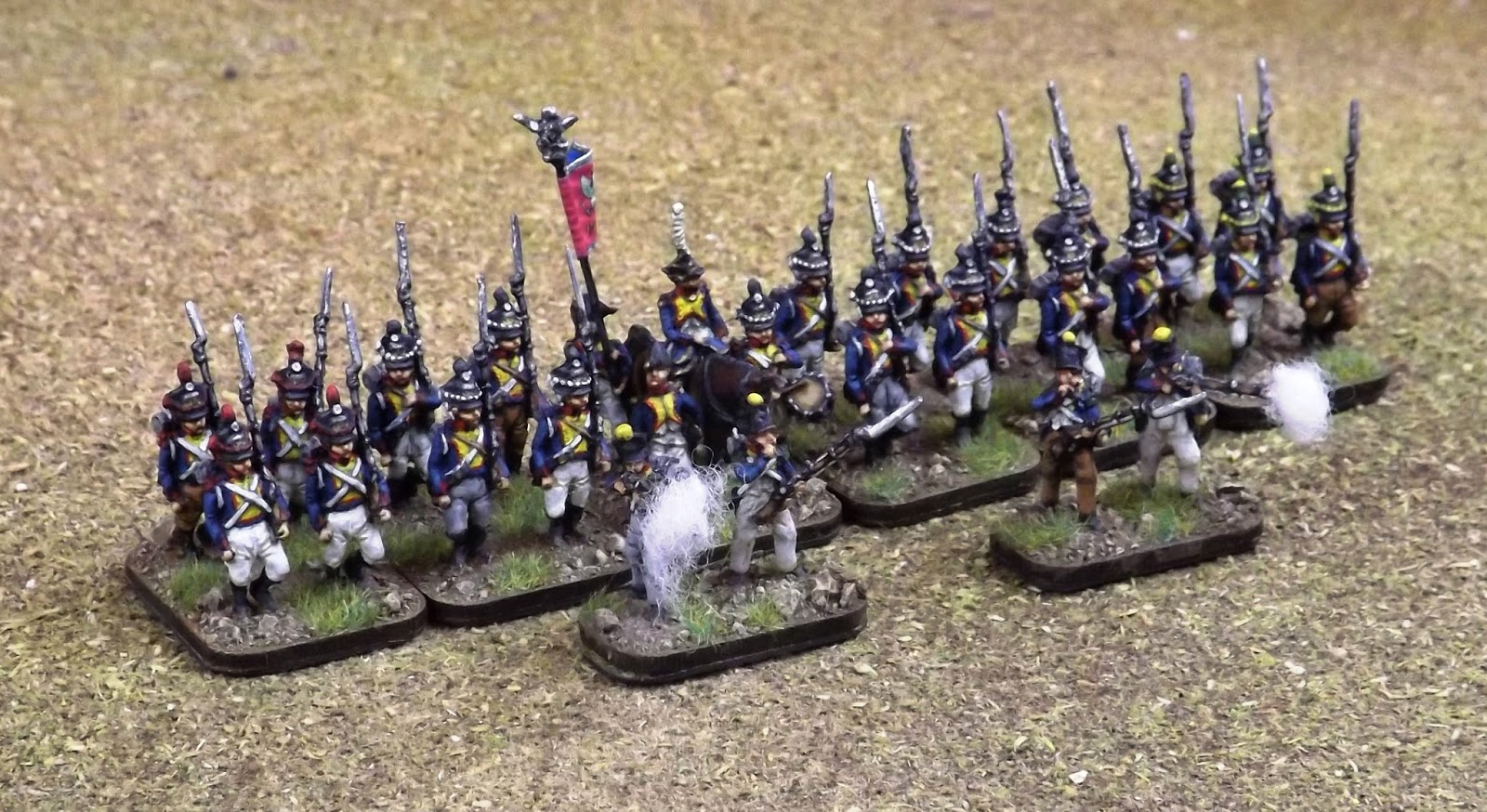 In the spring of 1808, Napoleon ordered the Vistula Legion into Spain, later reinforced by a Second Legion bringing the force up to four infantry regiments, a battery of 8 lbr guns and the uhlan regiment. This force was followed in the August by the best units of infantry in the Grand Duchy's army, the 4th, 7th and 9th regiments each of two battalions.

With the re-invasion of Spain in November 1808, the Grand Duchy Infantry regiments were part of Lefebvre's IVth Corps, 3rd Division under GdD Valence 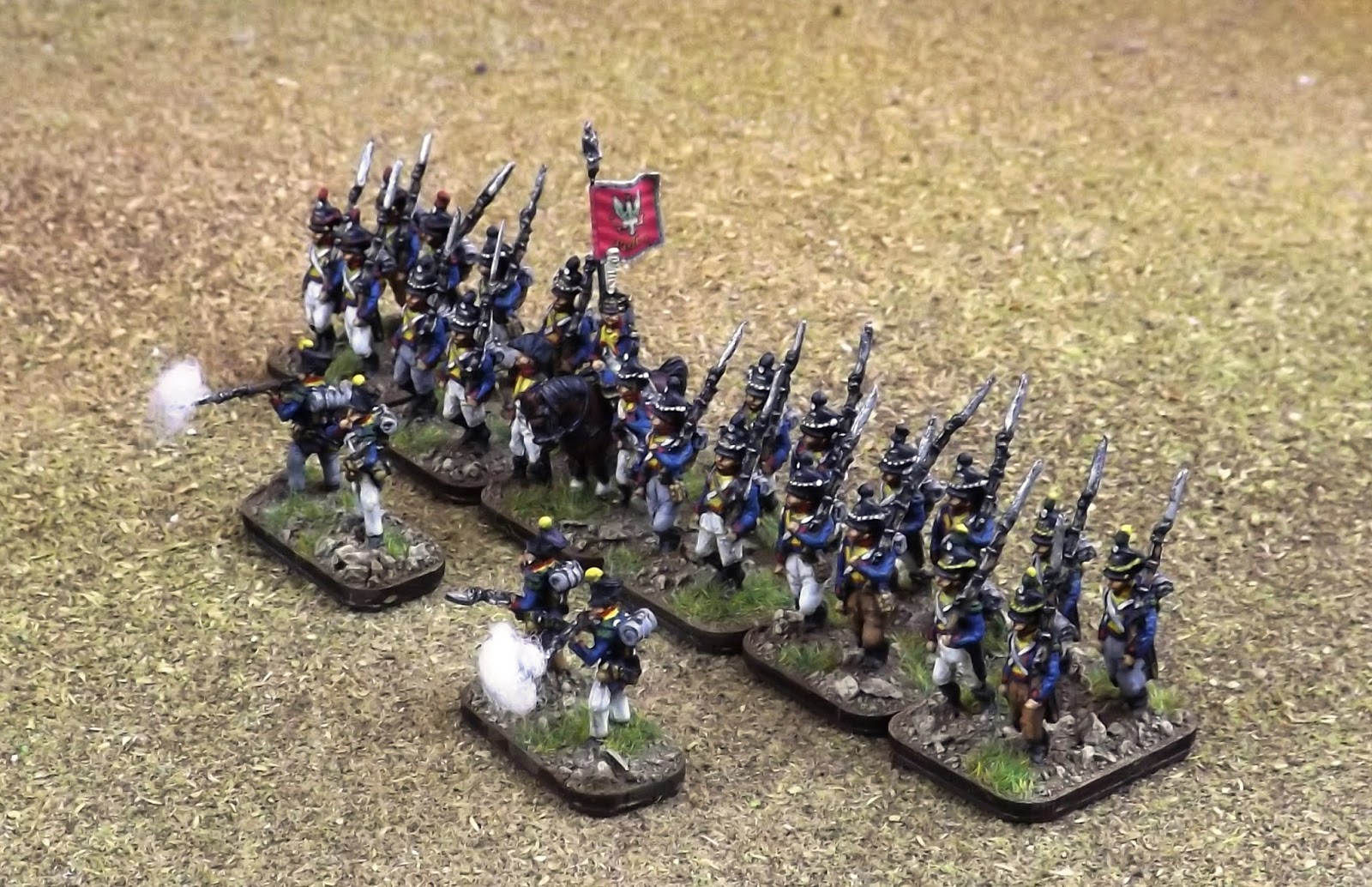 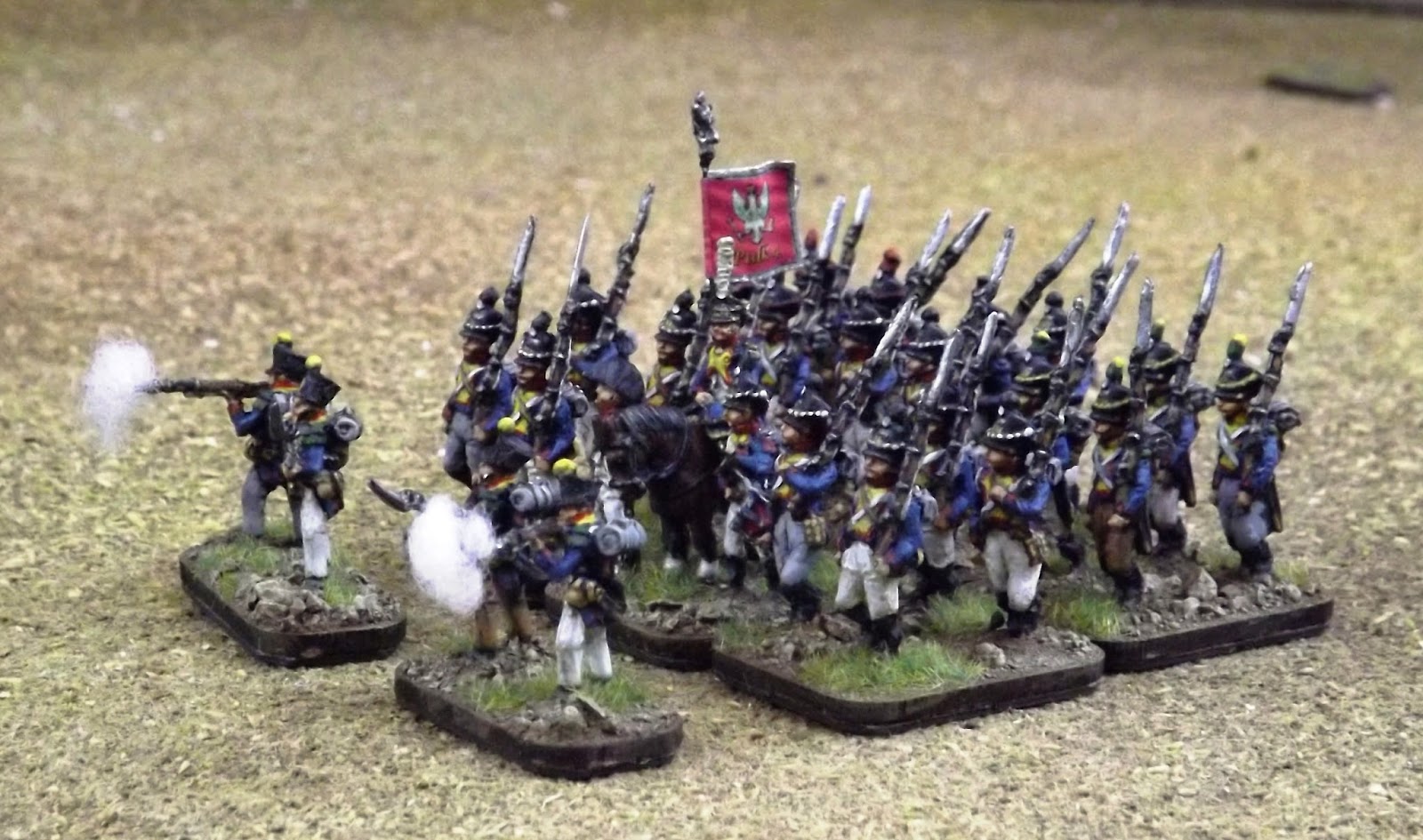 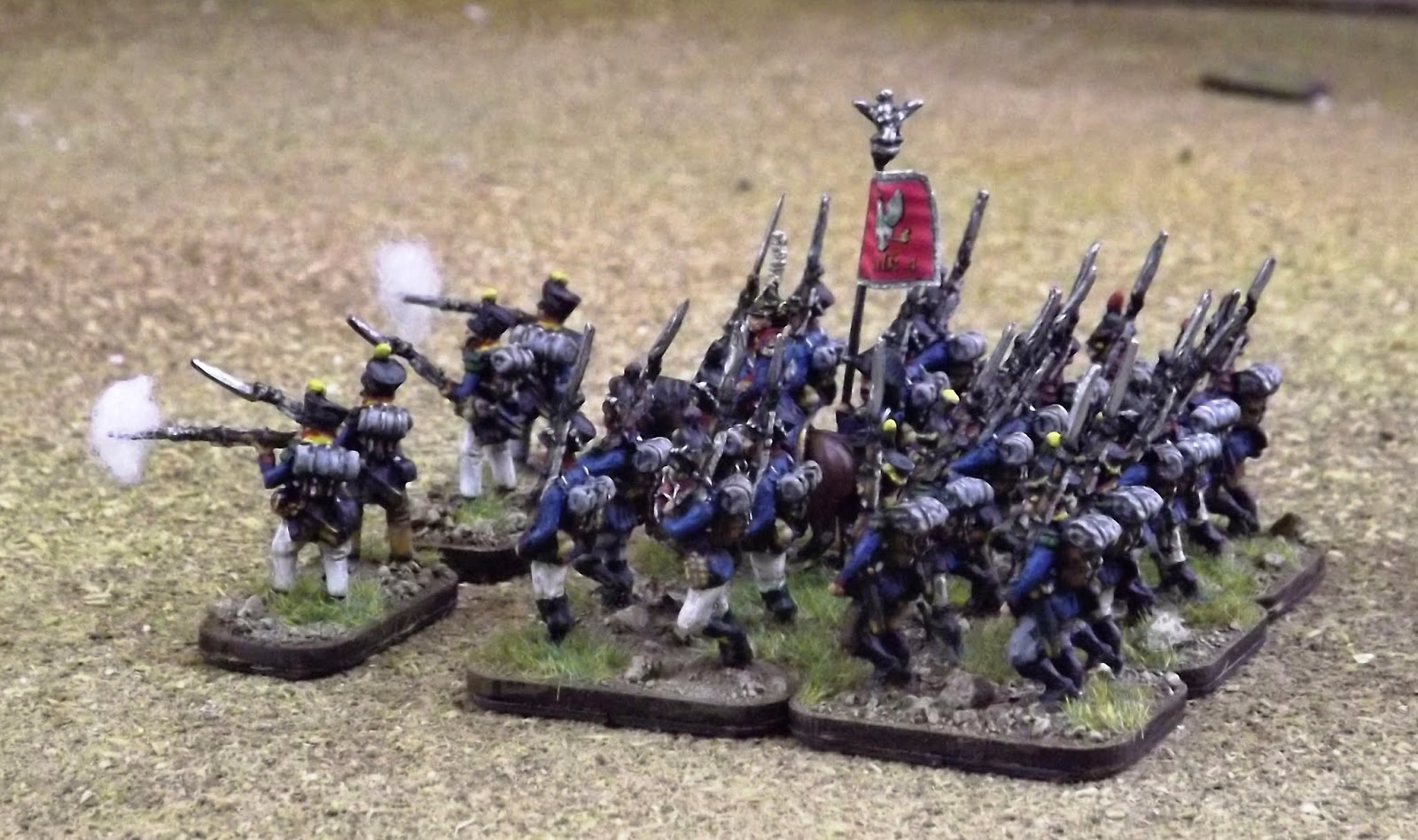 * Numbers are officers; sergeants; corporals, musicians; and gunners.
Oman, A History of the Peninsular War

The corps was reorganised by the time of Talavera with the the second and third divisions exchanging titles. Only the 4th Polish Regiment under Colonel Comte Felix Potocki, joined the rest of IVth Corps at Talavera, being attached to Leval's "German Division".

GdD Valence and the other two Polish regiments of the now 2nd Division were left at Toledo to watch General Venegas and the Army of La Mancha. 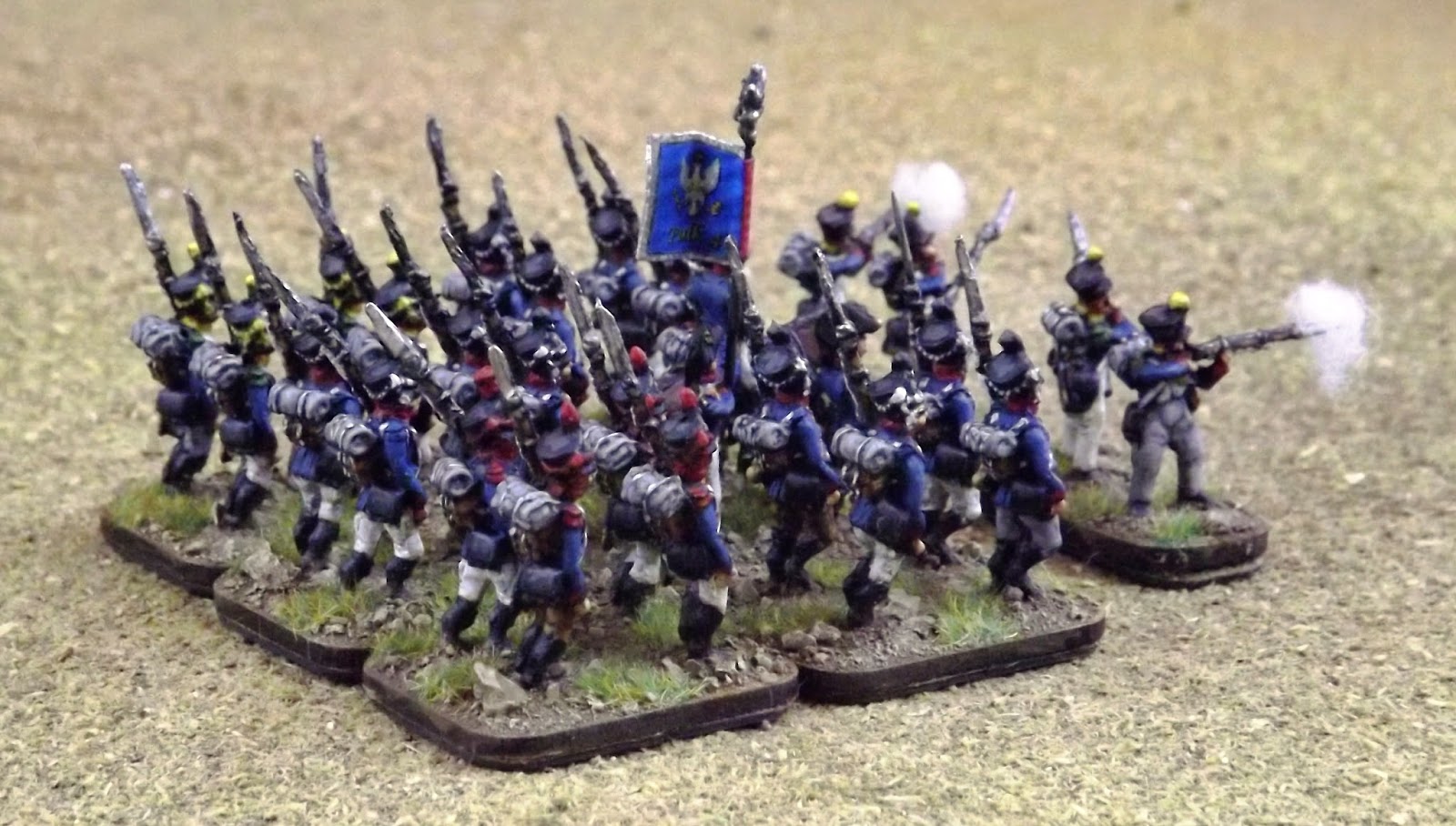 This decision to leave the Polish troops as a strategic reserve was mirrored with the deployment of the 4th Polish Regiment being left in tactical reserve during the Battle of Talavera. All through the campaign the French and certainly King Joseph were torn between the anticipated arrival of Soult's forces in the rear of the allied army and the threat to their own rear and a potential attack on Madrid by General Venegas. This explains the conservative retention of cavalry and infantry reserves (King Joseph's personal guard) not being thrown against the allied line during the battle.

The choice of the Poles to be in the reserve seems to have been a good decision if their fighting record is anything to go by and certainly the 4th Regiment would give a very good account of itself in the following year at Fuengirola where 300 members of the regiment defeated ten times their number of an Anglo-Spanish force sent against them.


The wargamer has an interesting time trying to piece together the various, often contradictory, written and visual references on the infantry of the Grand Duchy of Warsaw with a preponderance of sources focusing on the later period of Polish activities from 1812 with their recall and re-uniforming in time for the invasion of Russia.

The three Polish regiments were described as being in a very ragged state when, after being raised, they marched into Paris on their way to Spain and were entertained by the Imperial Guard. The units were issued with French uniform articles and most sources seem to agree that they entered Spain wearing bell topped shakos rather than the Polish style czapka issued to them later for the 1812 campaign in Russia. Thus I have opted to use the Warmodelling Vistula Legion infantry, suitably adapted but having a very early French style of dress with appropriate shakos and knee high leggings typical of French units earlier in the period. The flag is from Adolfo Ramos. 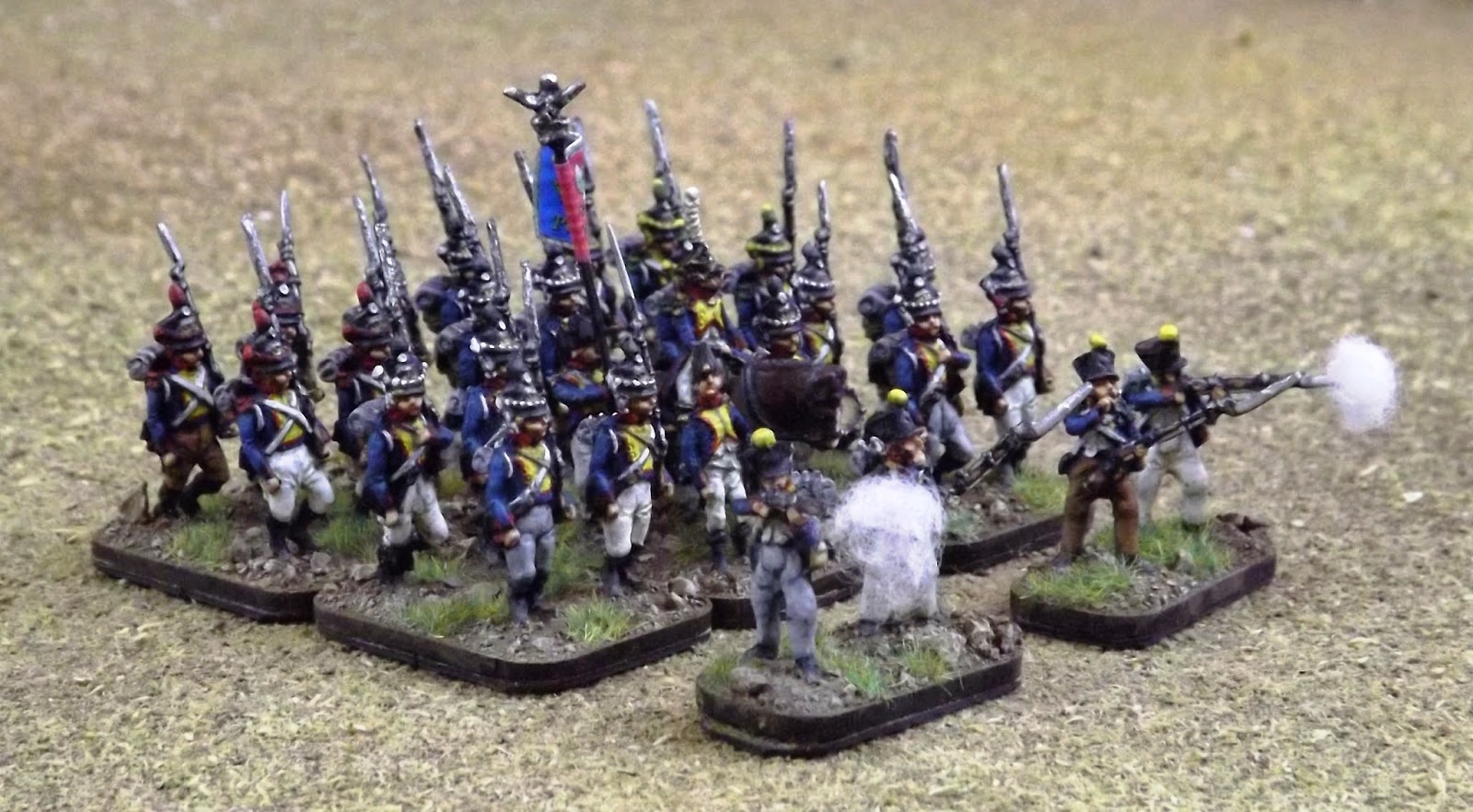 The shakos needed a Polish eagle painted over the brass plate above the peak (not seen on Vistula Legion infantry - see the two uniform illustrations for comparisons) and I had to scratch build a Polish eagle with raised wings to put on the standard pole. By no means perfect I am pleased with the overall look of the first battalion and they will make a very suitable reserve unit for the IVth Corps when set up on the table.

Next up Talavera Night Attack, Game Two and the 2nd/4th Regiment Grand Duchy of Warsaw Infantry.
Posted by carojon at 05:25