Regular followers of the blog will know that on completion of a divisional project, I usually put up a group post to get a feel of how the corps will look on the table amid the battle lines.

If you want to see the units individually and read about their history up to and including Talavera, you can follow the links above that were posted as each unit was done.

I am really pleased with the overall look of the division, which reflects the change in appearance that was starting to impact Spanish forces as they went into the second year of the war. 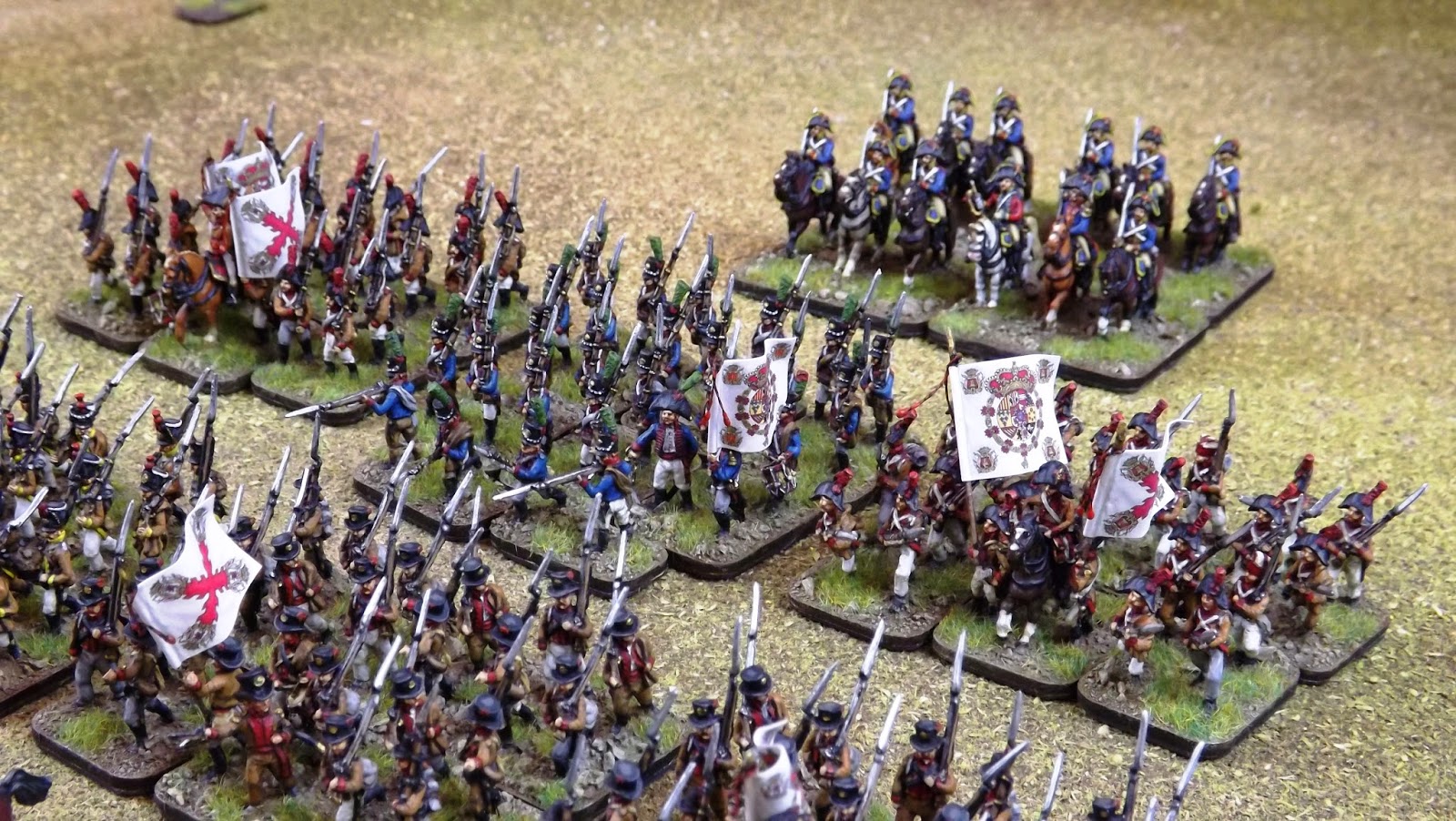 The brown, locally produced, cloth predominates, contrasted with the blue of the cavalry and light infantry, and the division will stand out when next to the other Spanish infantry division I plan to do, namely Bassecourt's 5th Division of regulars where the 1805/6 regulation white uniform will be the norm. 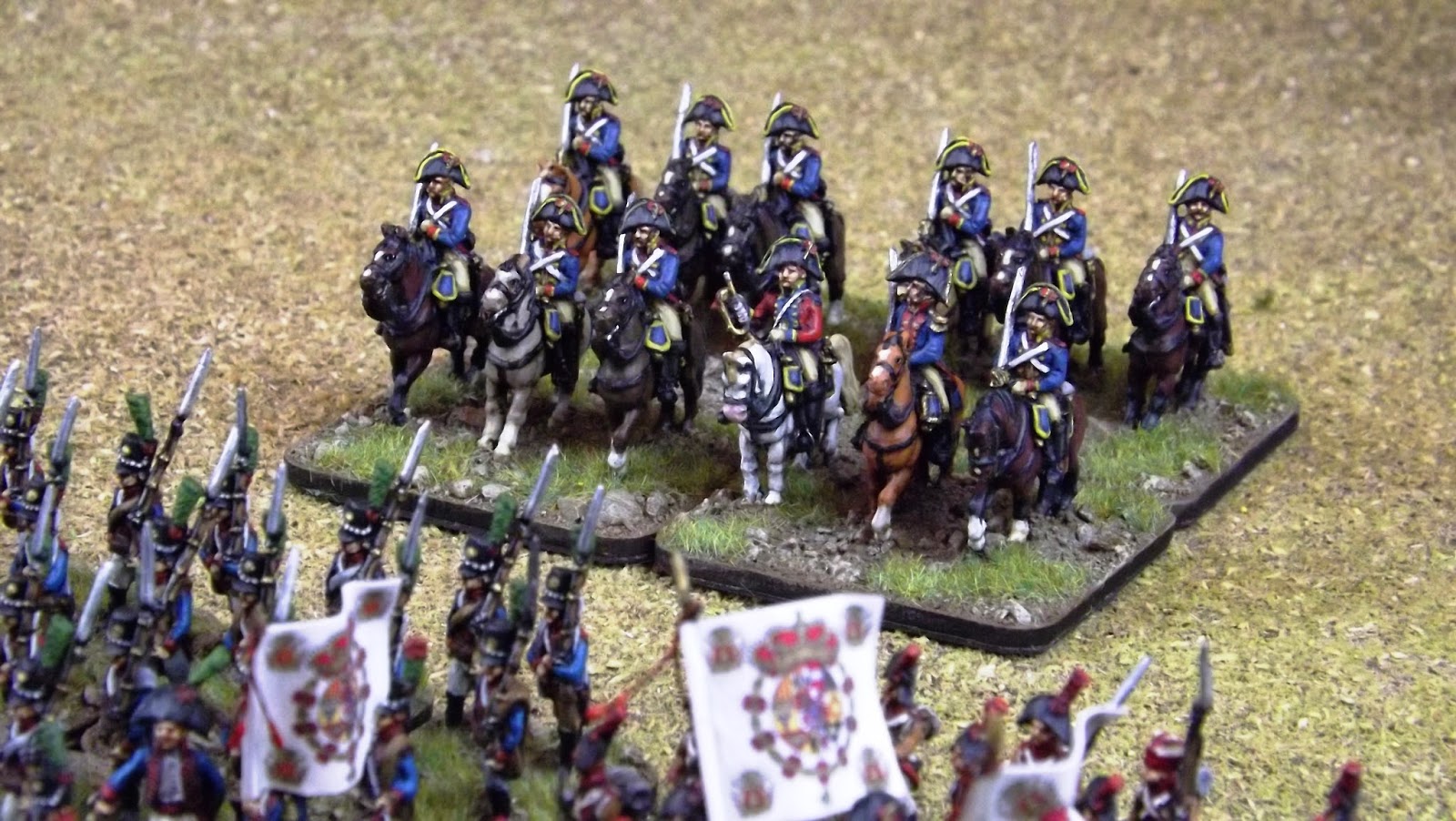 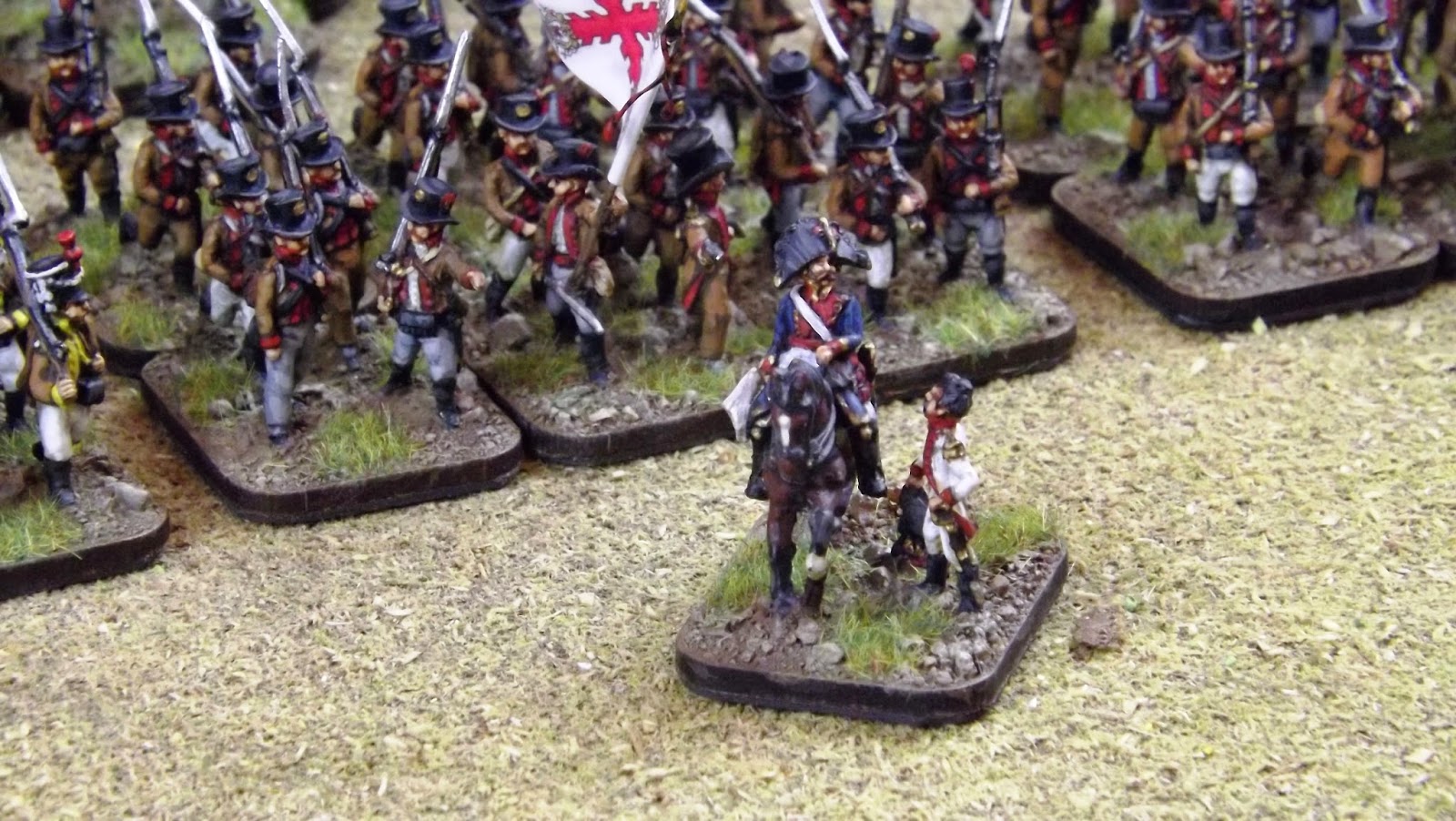 With the completion of this division, the formation of the forces required for the full battle that took place on the afternoon of the 28th July 1809 is moved a major step forward and for the allies, it leaves just seven regiments of Spanish cavalry, seven battalions of Spanish infantry, a battalion of redcoats and the Spanish artillery, which will be featured next. 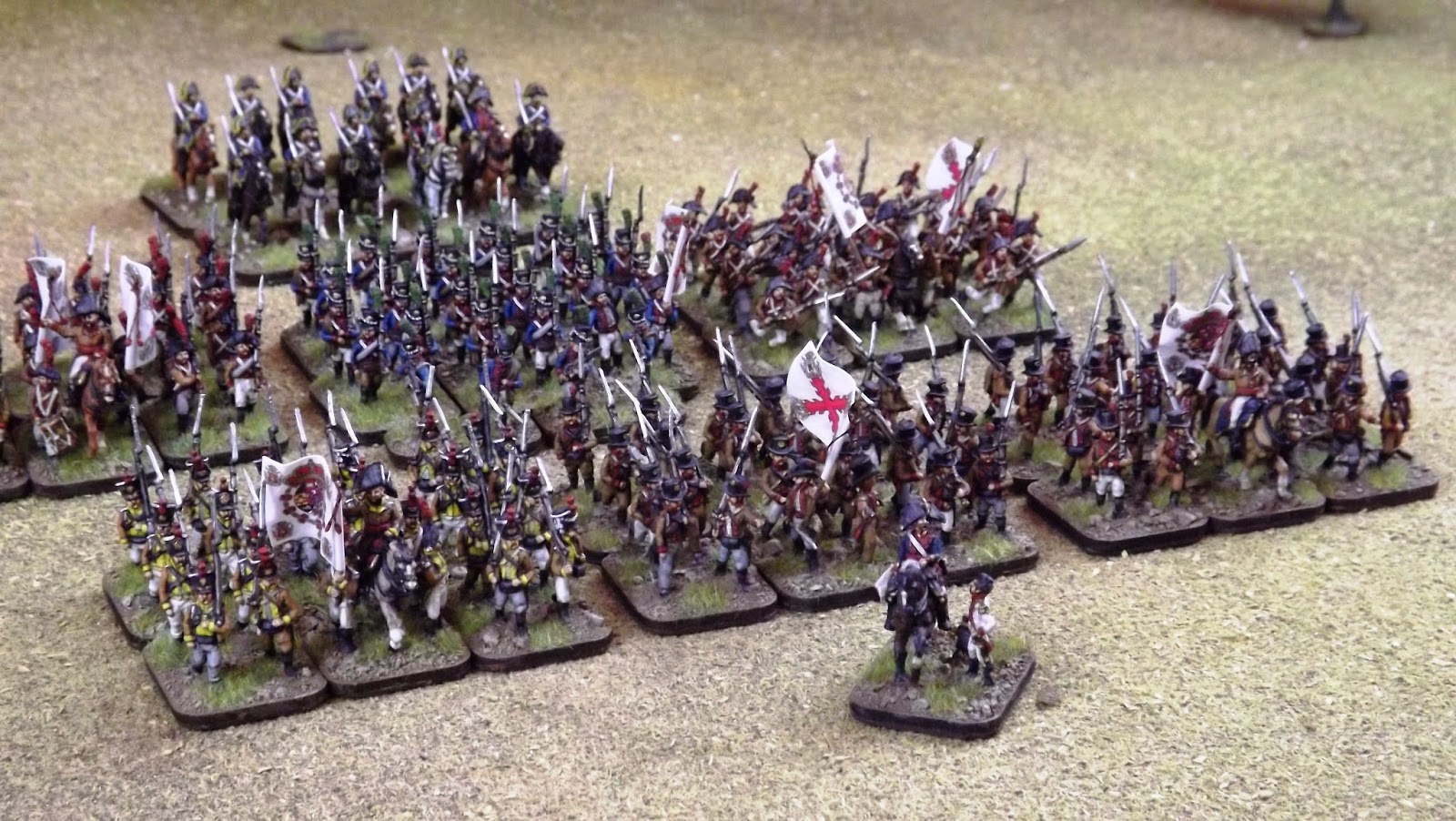 As you will know from my previous posts about the project, there is a plan to play scenarios from the battle as the collection grows, and Portagao's division adds to the work done last year on Leval's German division. Thus with the completion of the Poles and Spanish artillery, I will be able to put together a scenario looking at the attack on the Pajar Vergara redoubt.

This together with my new 6' x 4' Terrain Mat, being produced as I write this post, will allow me to set up a few scenarios with the guys at the Devon Wargames Group. 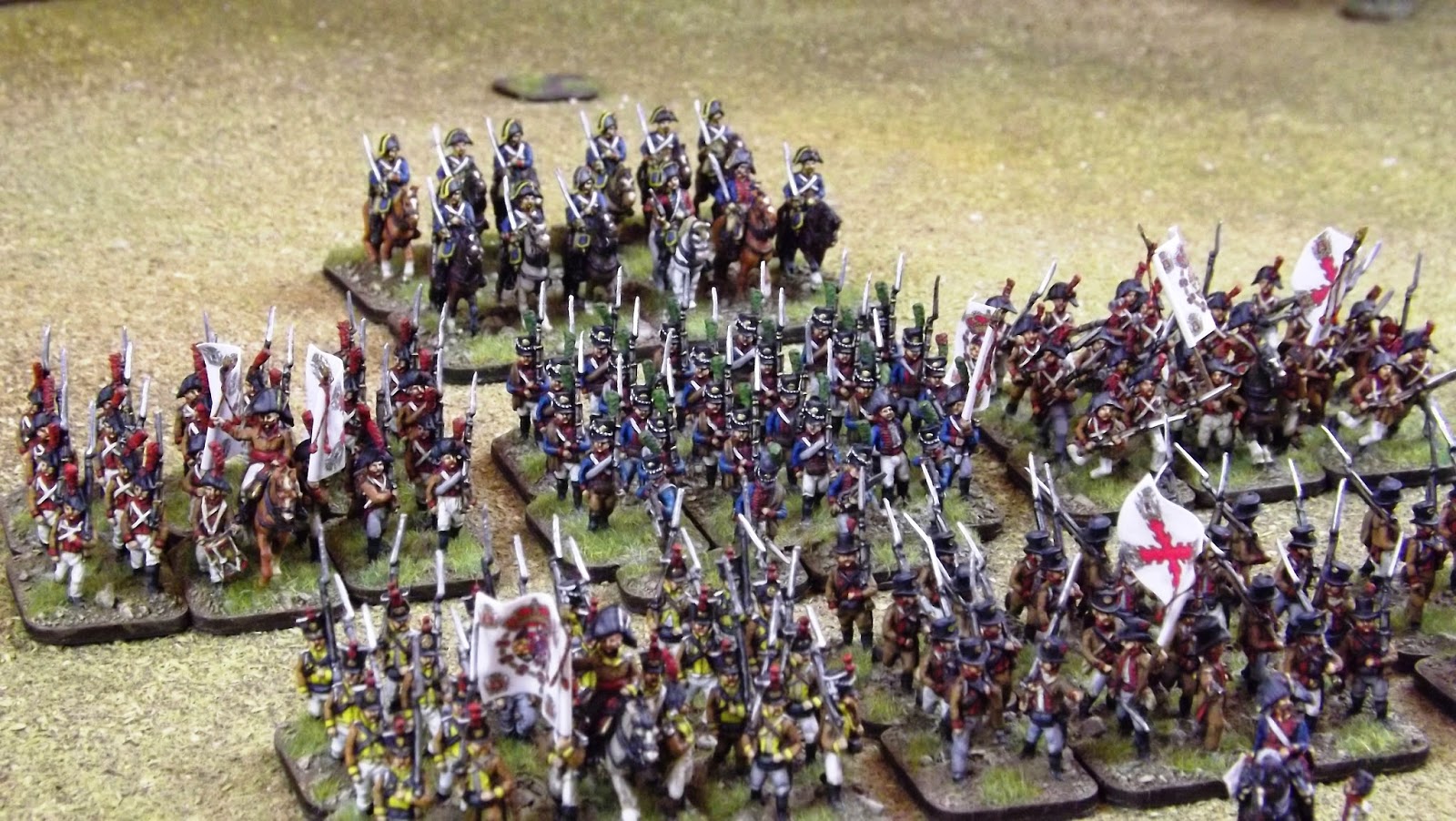 One addition to the division, that wasn't featured in previous posts on the individual units, is General Portago himself, which is using one of the Warmodelling Spanish general officer figures conversing with a militia officer sporting his new model white uniform. 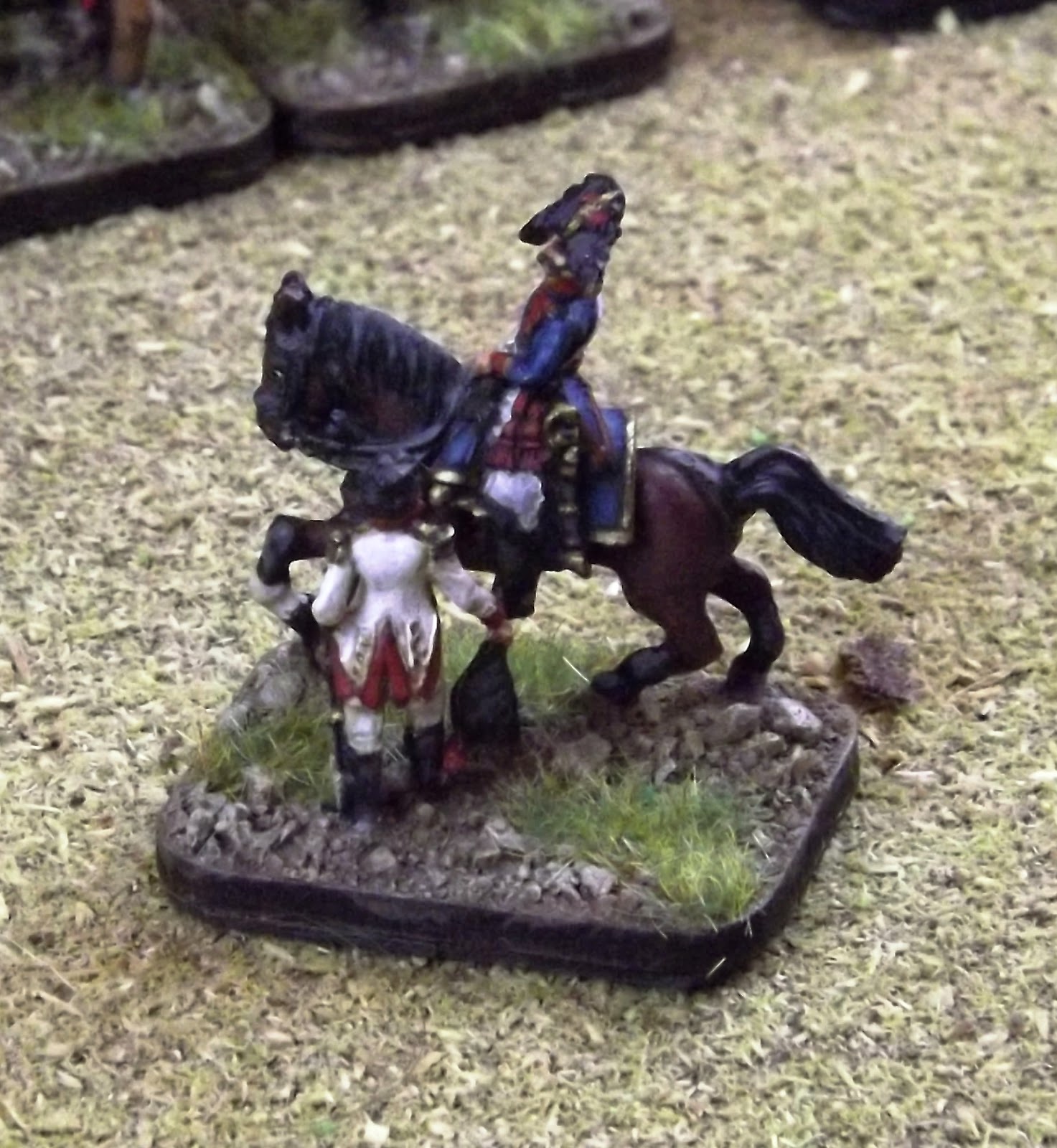 Using Carnage & Glory, I am able to model this work load, by Portago having the attributes of a brigade level general officer, principally a small radius of command, about 300 - 350 paces, as against the normal radius for a divisional commander being twice that span. 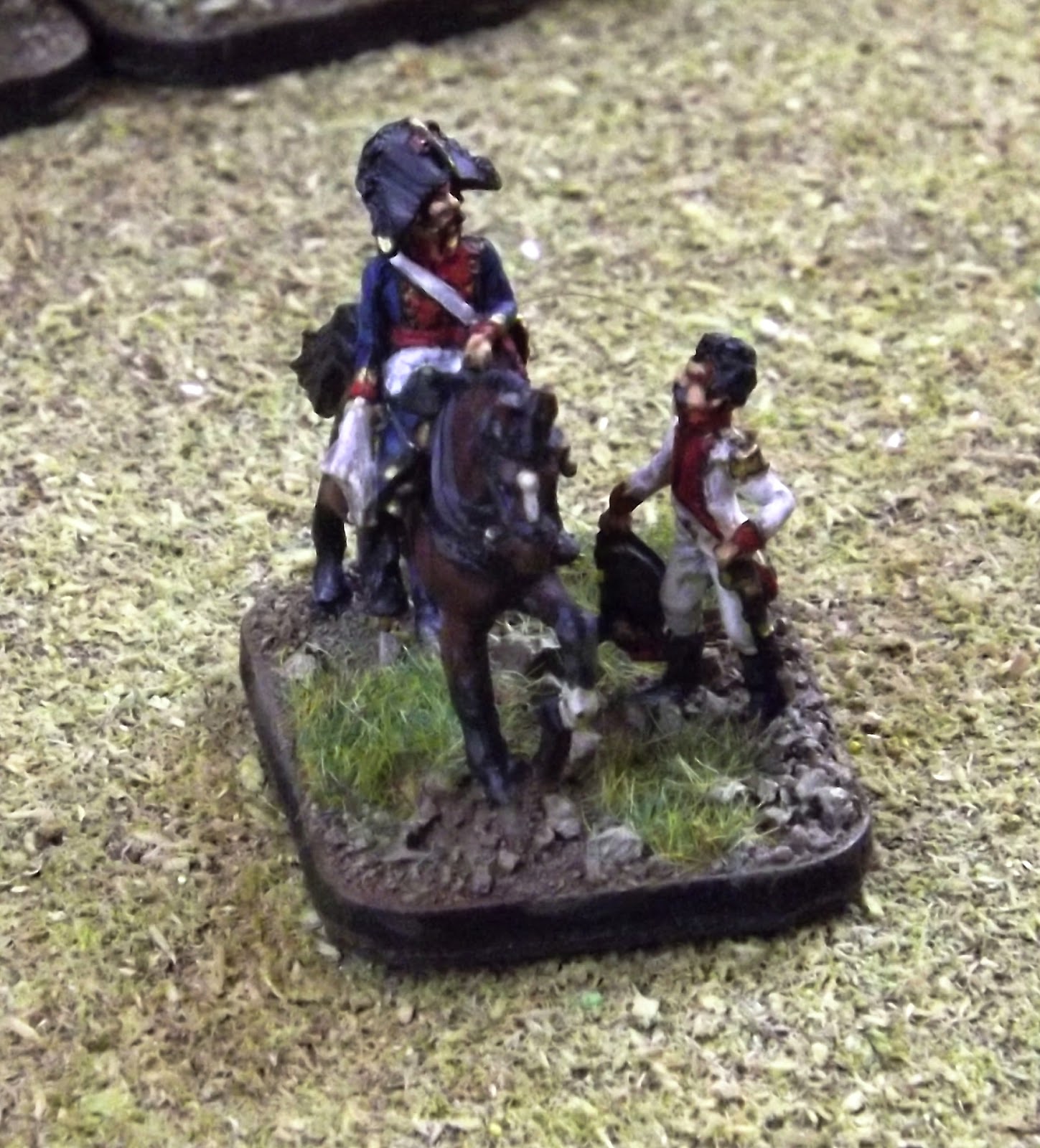 This will impact on any wargamer rashly throwing this division into mass combat, as when morale problems start to arise, which they will inevitably do with a Spanish force, Portago's command radius will severely restrict his ability to keep his division functioning as a controlled fighting force.

The ability to fight this division with any success will entail the careful selection of times when to fight and when not to, and being careful not to commit or expose the division to too much wear and tear. In addition given the brittle record of the front rank units, the Toledo and Badajoz Regiments, extra care will be needed when deciding to use these units. The glaring deficiency that will cause any opposing French commander to lick his lips with anticipation is the almost total lack of skirmish cover and the opportunity to degrade the command and control of each of these battalions by softening them up with a cloud of voltigeurs

Thus a new skill set will be required by any budding Spanish Napoleonic commander, and frankly fighting with British or French troops will be a "doddle" compared to having these chaps still under command at the end of a game.


So next up will be a few Spanish supernumeraries, in the form of a few skirmish Spanish militia which will be supporting the gunners in the Pajar redoubt, plus some casualties and running away figures which I use in C&G to mark units that have poor morale effects and compulsory movement restrictions. Then it will be on to the Spanish gunners and their mighty 12lbr cannon that roughed up the Baden Regiment. Once these chaps are done it will be on to the Polish infantry, cavalry and Westphalian Cheveau-Legere.