Progress with the Talavera project continues with the completion of the first part of the Spanish forces involved in the fighting, with the addition of Spanish artillery and supernumeraries. 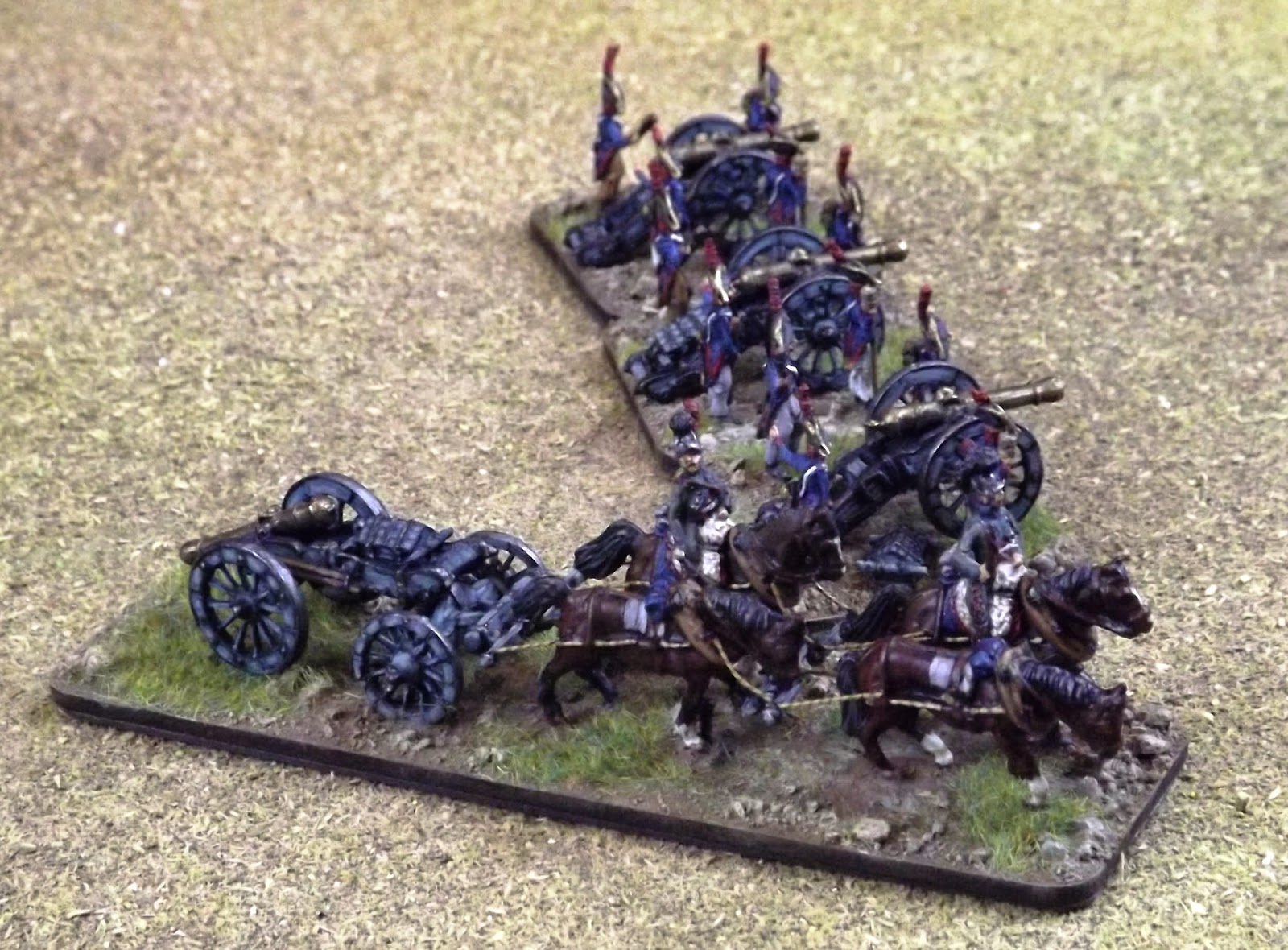 The gunners were known to fight their guns, often to the last man given their poor mobility due to a lack of suitable draught horses. Many batteries ended up as position units relying on mules and bullocks to relocate them. 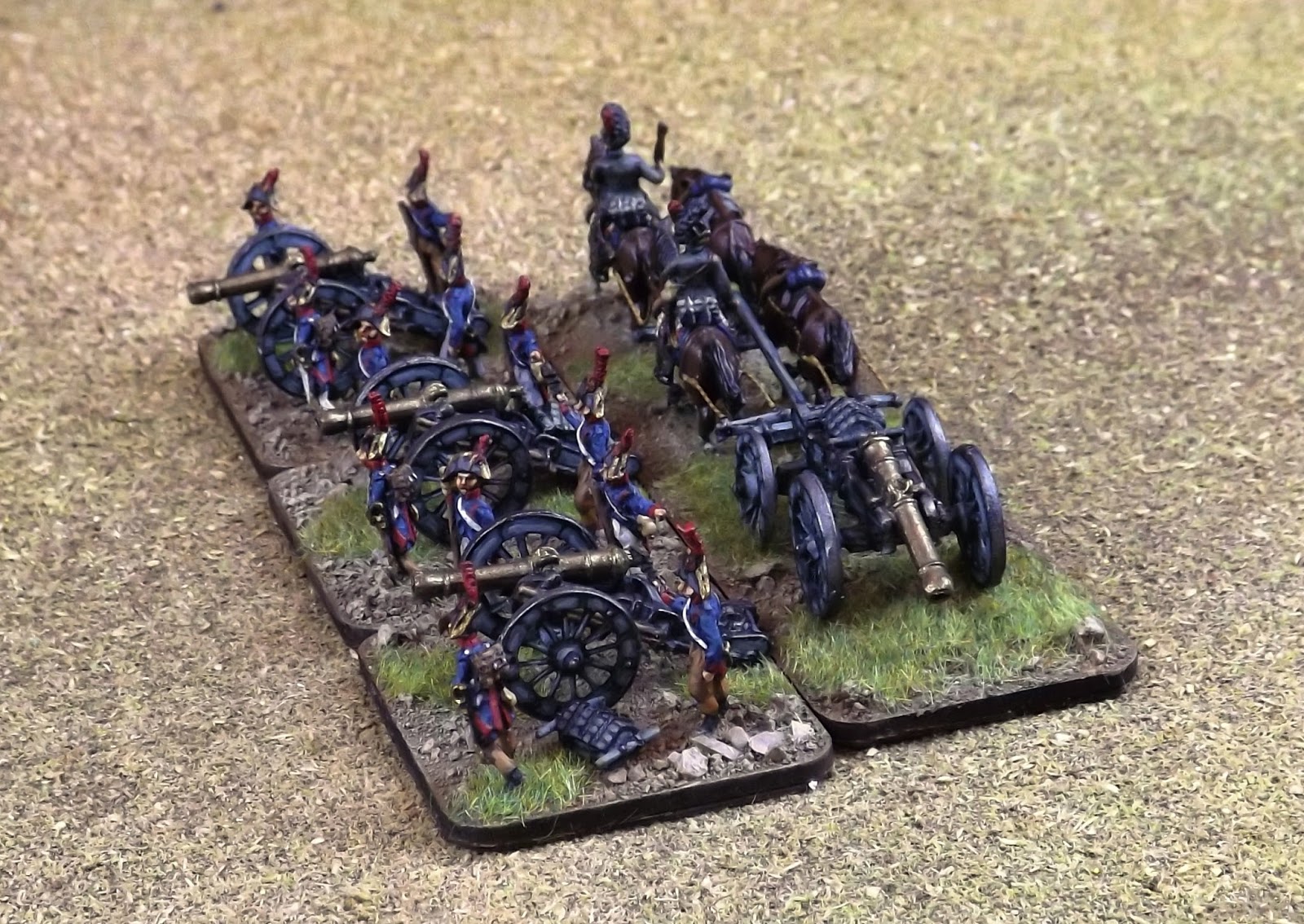 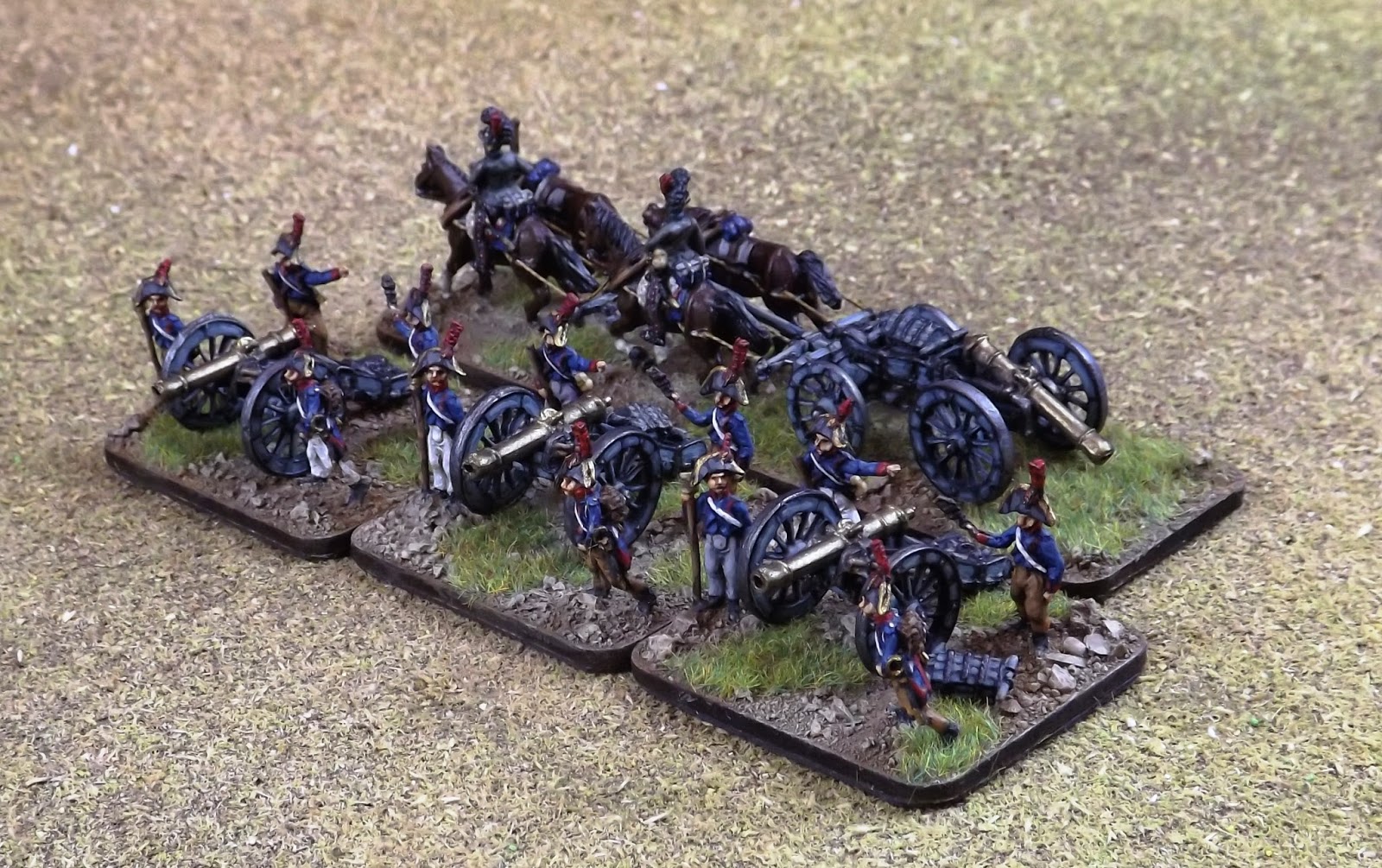 The 12lbr guns were pivotal in bringing their heavy fire power to bear at the Pajar Vergara redoubt with four of their guns emplaced their along with Lawson's six 3lbr Royal Foot Artillery battery. It was these guns that stalled the attack of the German Division as the Baden regiment came face to face with the two batteries, losing about 300 of their number including Colonel von Porbeck and causing the Badeners to break back to the cover of the olive groves and causing their neighbours to halt in disorder.

Later in the afternoon, half of the battery was redeployed to support British troops on the Cerro de Medellin, providing a long range threat to General Ruffin's troops who were gathering in attack columns at the head of the northern valley. It must have proved uncomfortable for the French troops forced to form square by the threat of allied cavalry to sit under the muzzles of these guns. 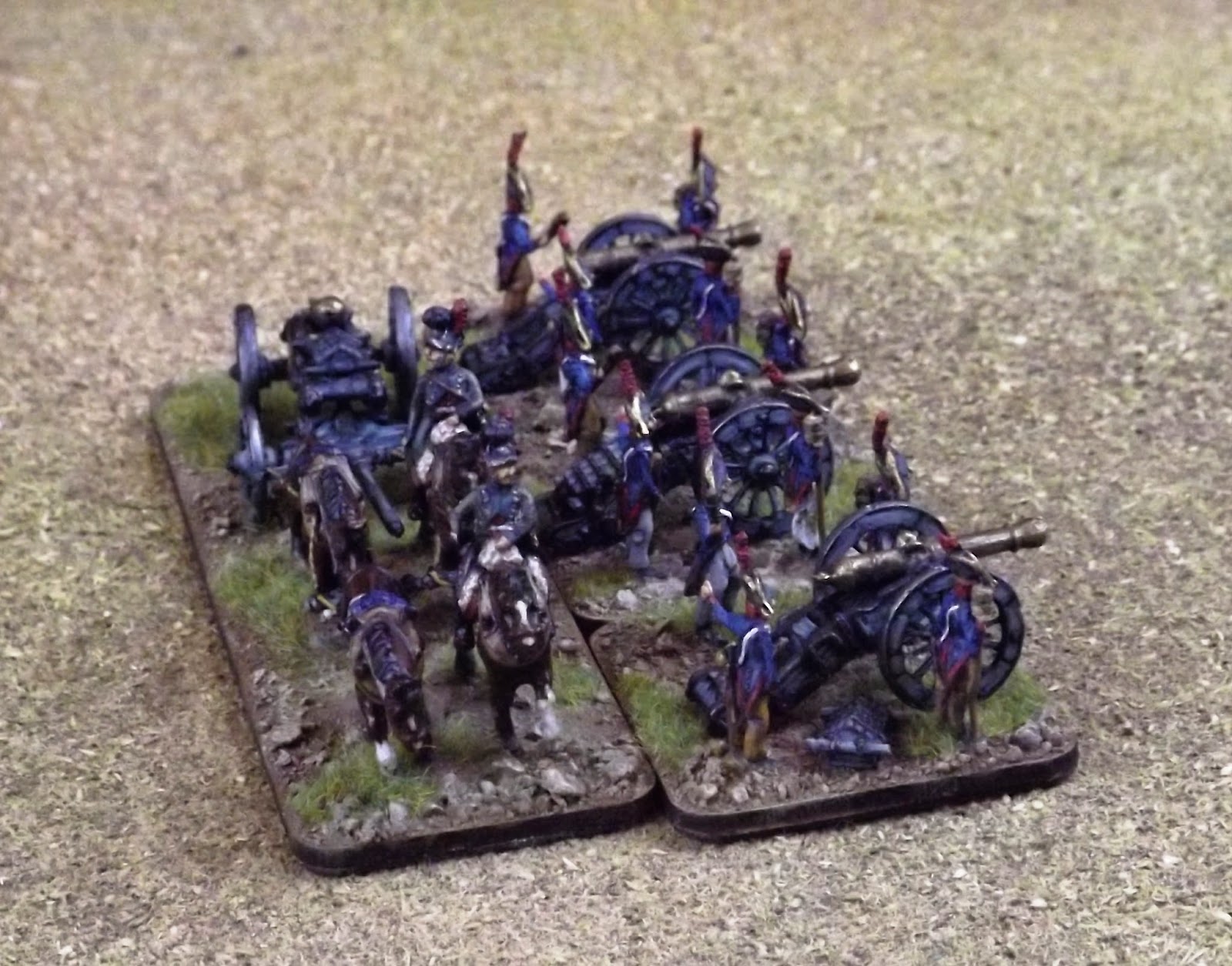 I have built more 12lbrs than I need as my batteries are now modelled on two guns rather than the three to four models suggested with Napoleon at War rules. So not all of these models will be on the table for this project, but still make a handy addition to the collection for future games.

My models are using the range from Warmodelling. The gunners are still in their 1808 regulation dress all be it, "campaigned up". The limber team is rather fanciful as it is based on the 1813 uniform seen above, very unlikely to have been seen at Talavera. In time I will be looking to get some 18mm Oxen to hitch up to a limber to better represent the look of the battery as a whole. Until then, the 1813 team will substitute, and they will come in handy when we get to Castalla. 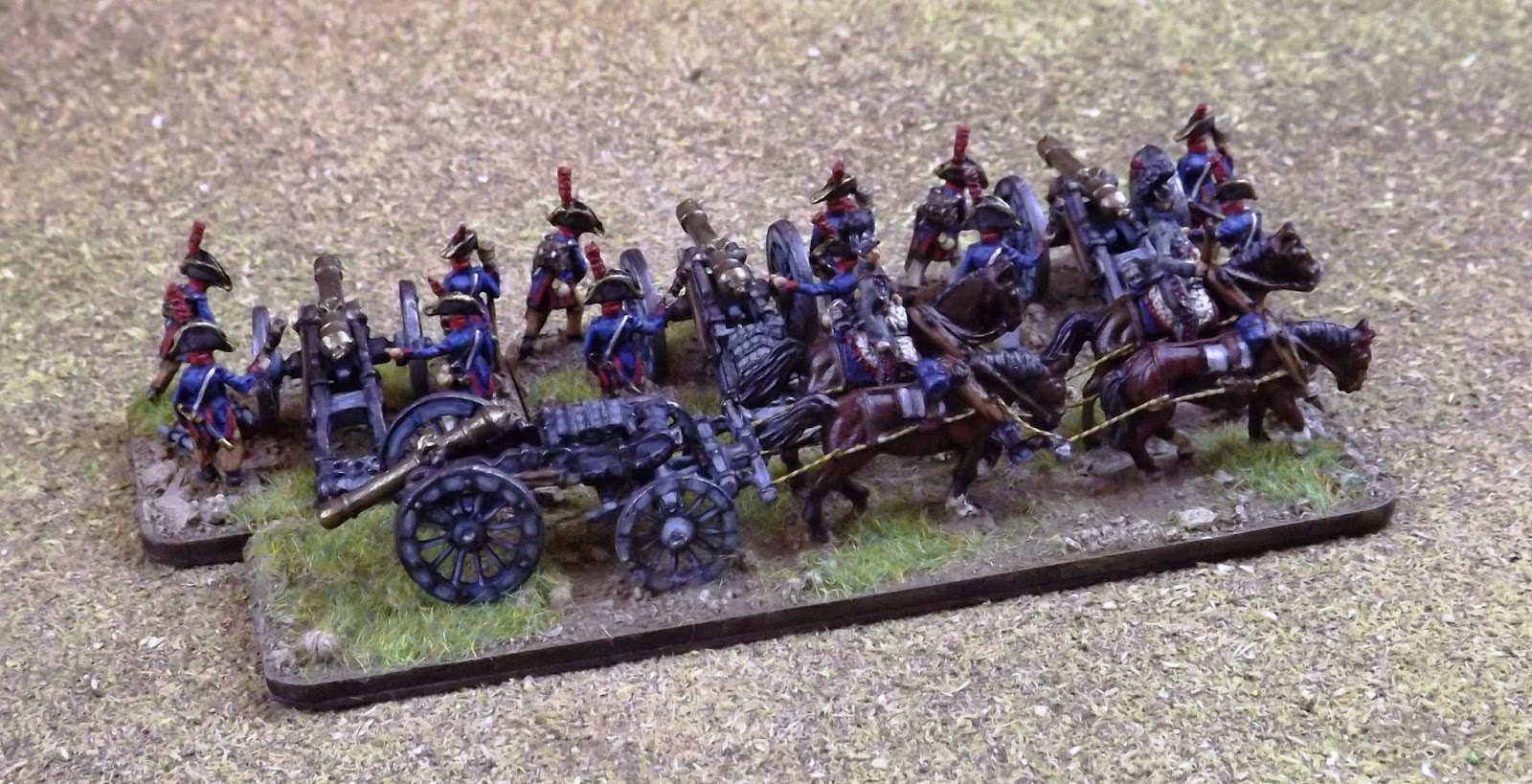 In addition to the Spanish guns I have put together some new gambion embrasures from "Last Man Last Bullet" which will be my redoubt on the Pajar. These gambion sections are perfect for my models as they are produced in 45mm sections that fit my gun base frontages precisely. I gave them an underpinning of mdf and magnetic tape that raises them to the same height and allows a bit of ground texturing.

With a few barrels and boxes stacked nearby, this should form a nice centre piece on the British right flank.

The last bit of work done this week was to get some Spanish supernumeraries done. With Carnage & Glory, the damage inflicted on units will cause some of them to become subject to compulsory movement (halt disordered, retire, rout etc) that causes them to be unavailable to the player in the next turn.

I always try to keep markers to a minimum on my table, limiting it to charge markers, little coloured counters to show the range of a charge move, if the defender breaks to reveal other potential targets, and little flag markers that when turned over reveal charge orders at the start of a turn.

For compulsory move restrictions I like to place a casualty marker next to the unit or commander so players know which are affected next turn. So now my Spanish forces have appropriate markers. 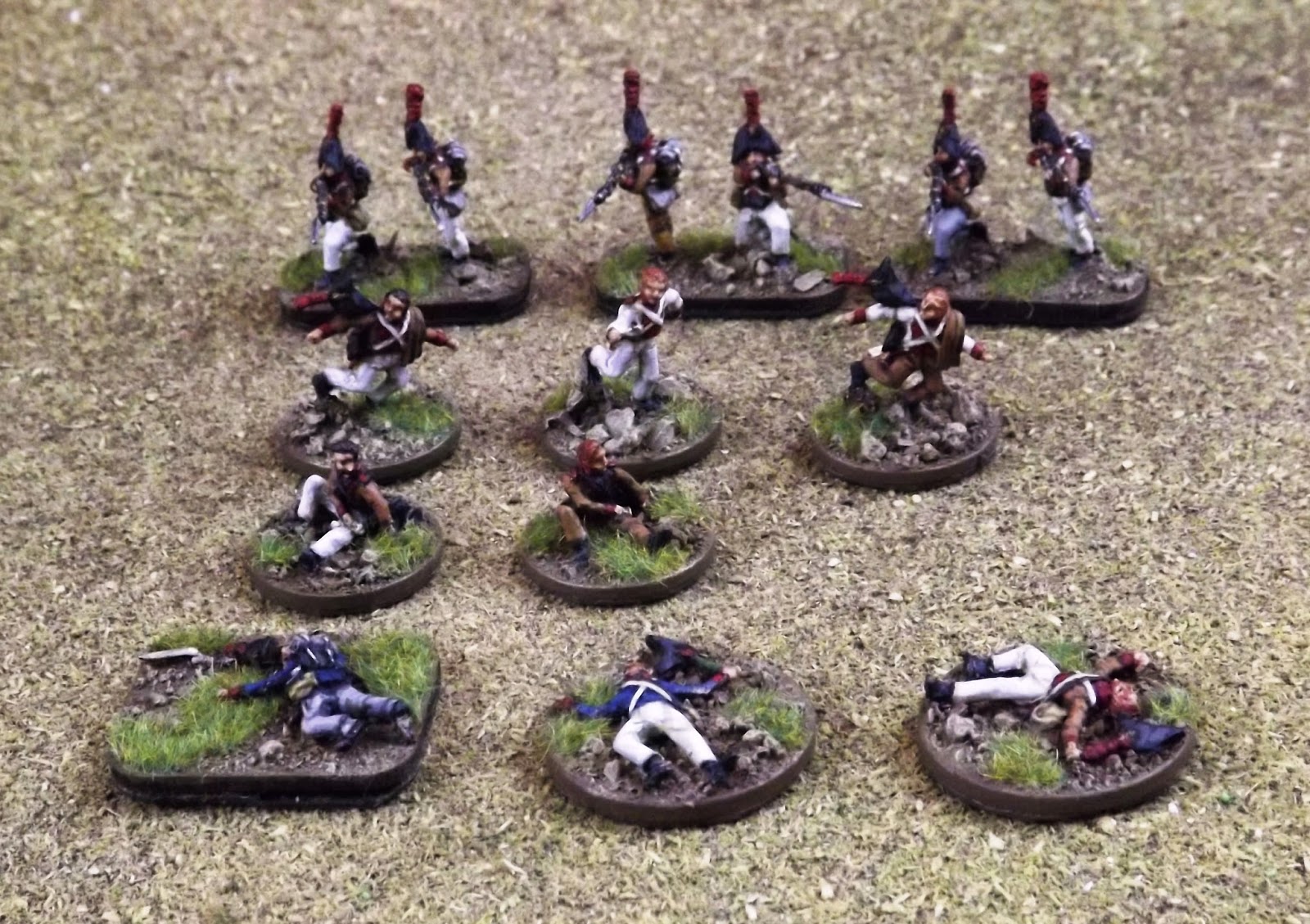 As you will have seen, not many of the Spanish units are modelled with skirmish elements, given their tactical doctrine. However these bases come in handy to represent small forces, garrisons etc and so I have done a few bases for when the need is required. All the models are from Warmodelling. 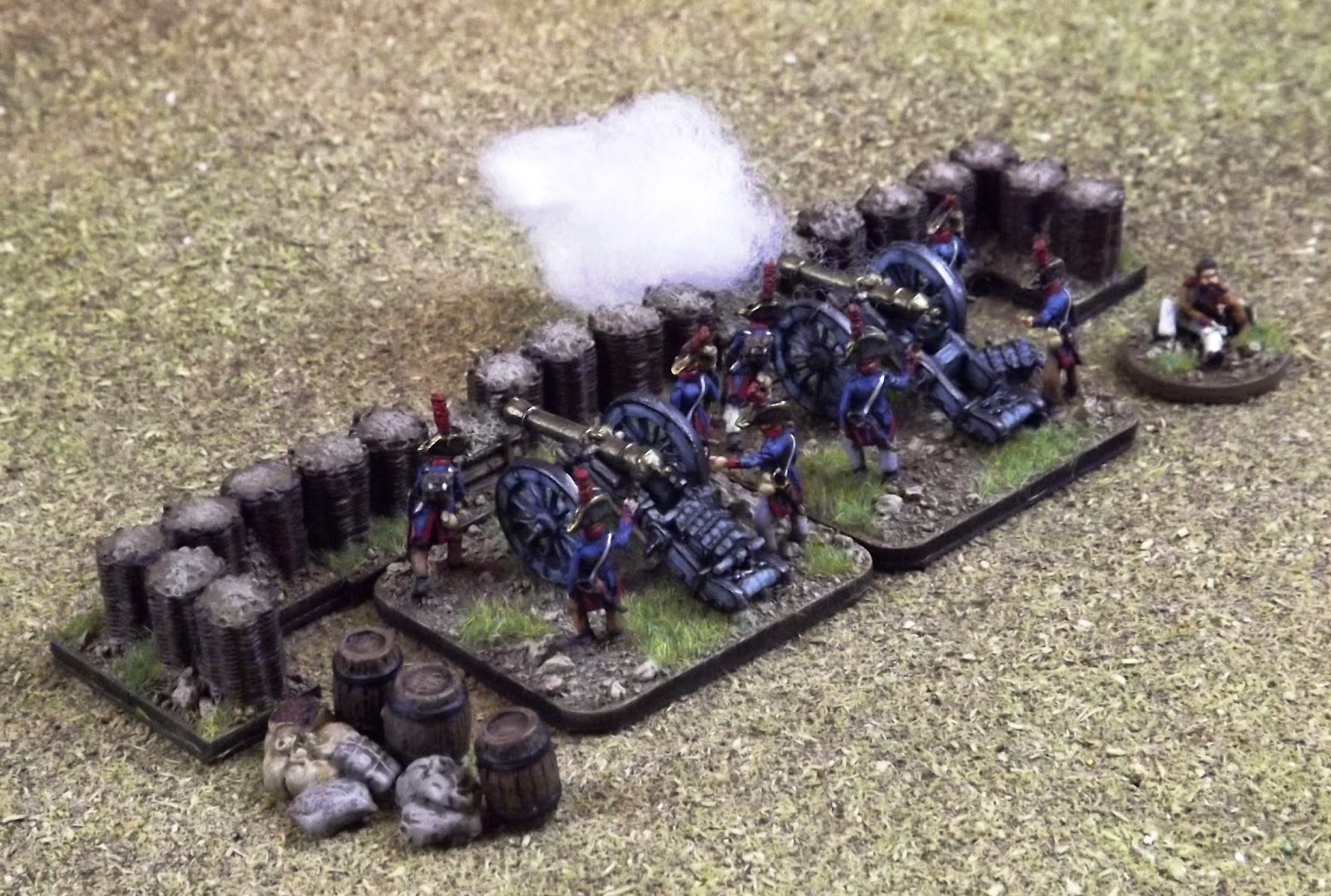 Sources used in this post include;
Alfons Canovas' blog showing some great pictures of examples of Spanish artillery uniforms throughout the war.
http://miniaturasmilitaresalfonscanovas.blogspot.com.ar/2013/02/uniformes-de-la-artilleria-espanola-n-3.html