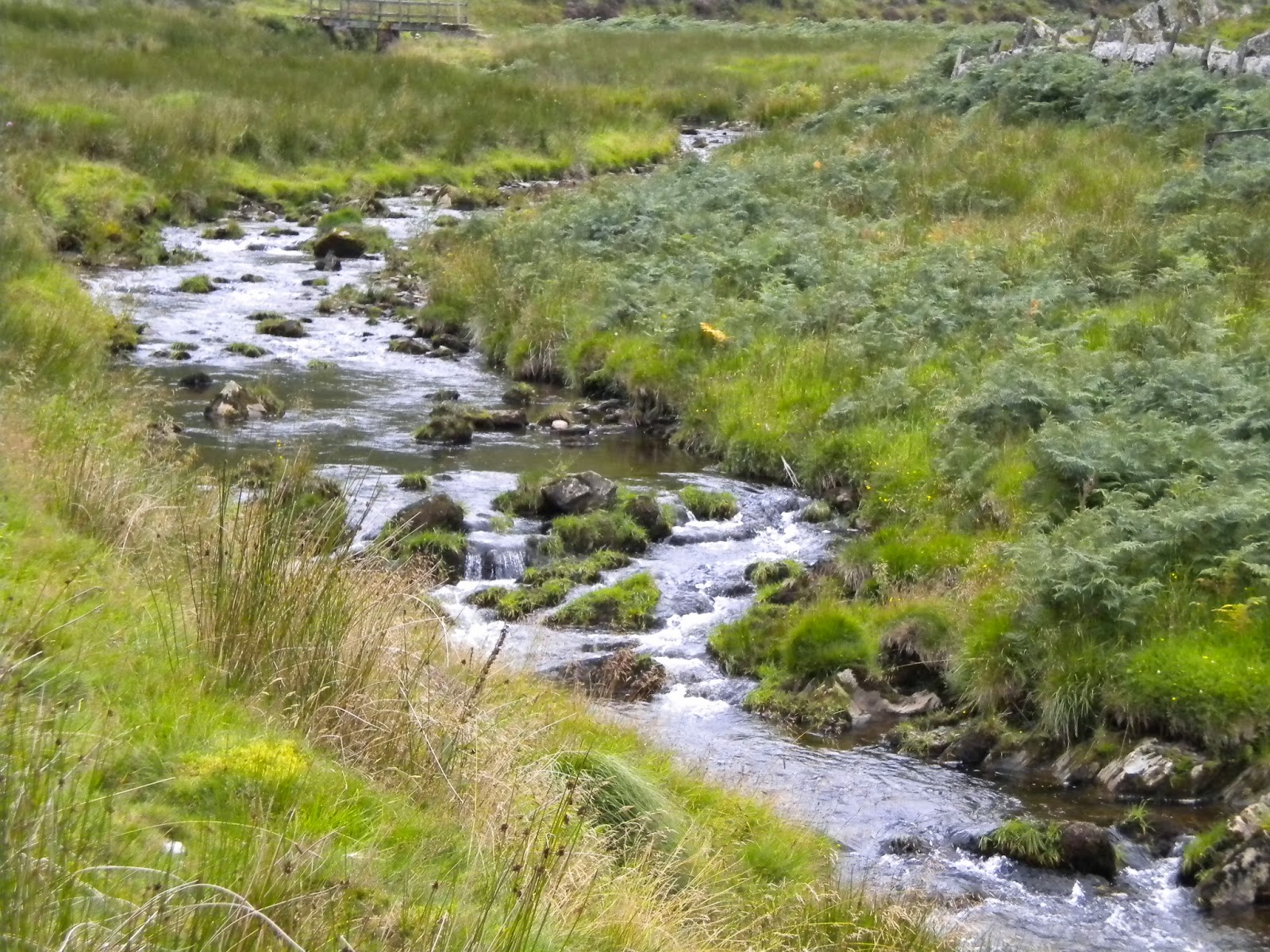 Back in October 2013 I put together some stream sections for my planned Vimeiro game using a very versatile material, roofing felt. I have had questions about these simple bits of terrain so thought I would run through the construction.


The battlefield of Talavera has quite a bit more water running over it than at Vimeiro and so I needed some more stream sections. This is part of a general project to get the terrain done for the southern sector which was started with the completion of the Pajar Vergara gambions done in conjunction with the Spanish artillery.

Later I will be adding to my small olive tree collection and I plan to do some more cloth roads to add to my current collection.


The Iberian peninsula is land covered in mighty rivers with many small tributaries and streams leading into them and so having plenty of these little bits of terrain is really useful.

As before, I cut lengths of roof felt and then added little off cuts along the edges fixing them with general purpose glue. I should say that I work with the smooth side of the felt rather than the gritty weather protected side.

The next stage was to paint a layer of PVA glue on the water section which makes that area smooth and slightly textured giving an impression of water.

Once dry I covered the banks in PVA and added the sand and grit for texture.

The next stage was to take a jar of household water based emulsion in a suitable dark chocolate brown and paint the whole sections. In the UK I like to use the Craig & Rose 1829 Edinburgh range of chalky emulsion 100ml tester jars, clove brown. It really dries dark and washes out of the brush easy. 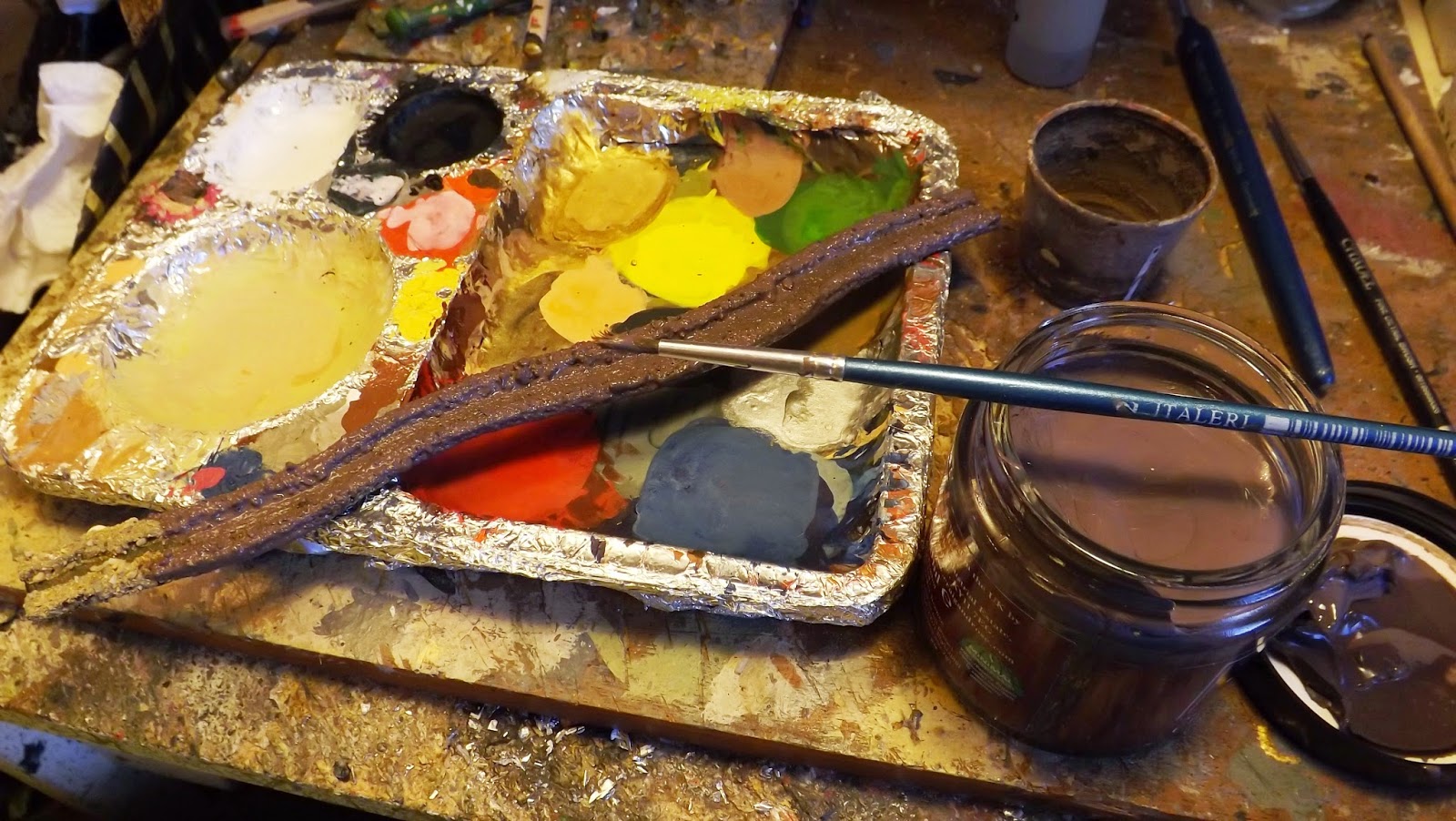 Once dry I then dry brushed the ground work with a light brown and cream shade of acrylic paint and painted the water area a dark green (citadel dark angels green - they probably have a new name for that colour now). 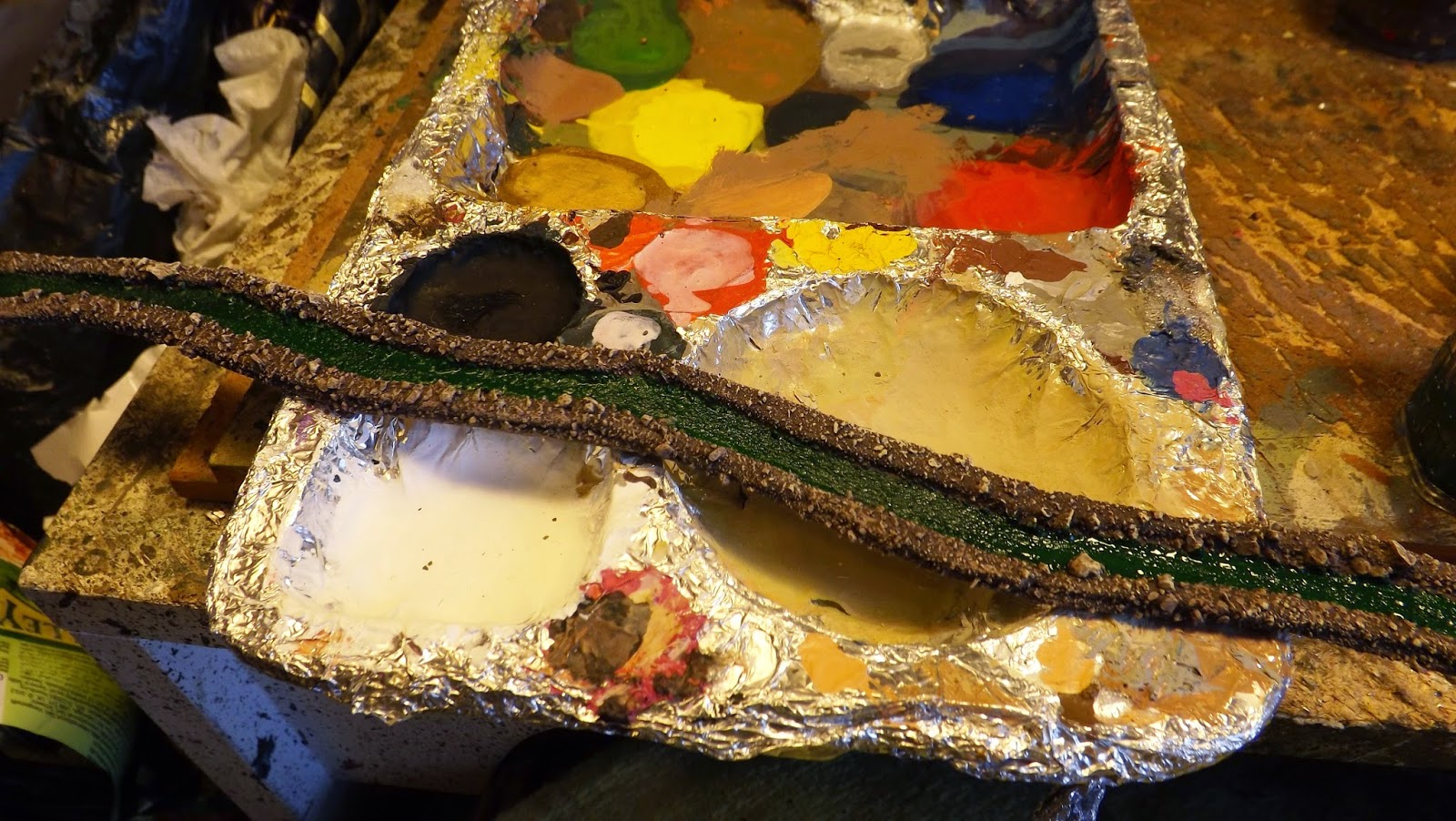 Once the green is dry I added a coat of gloss varnish to give my water a bit of shinny depth. I should add that if this was a wider water course I would shade the green lighter from the centre to the banks to create a shallows effect near the ground work. 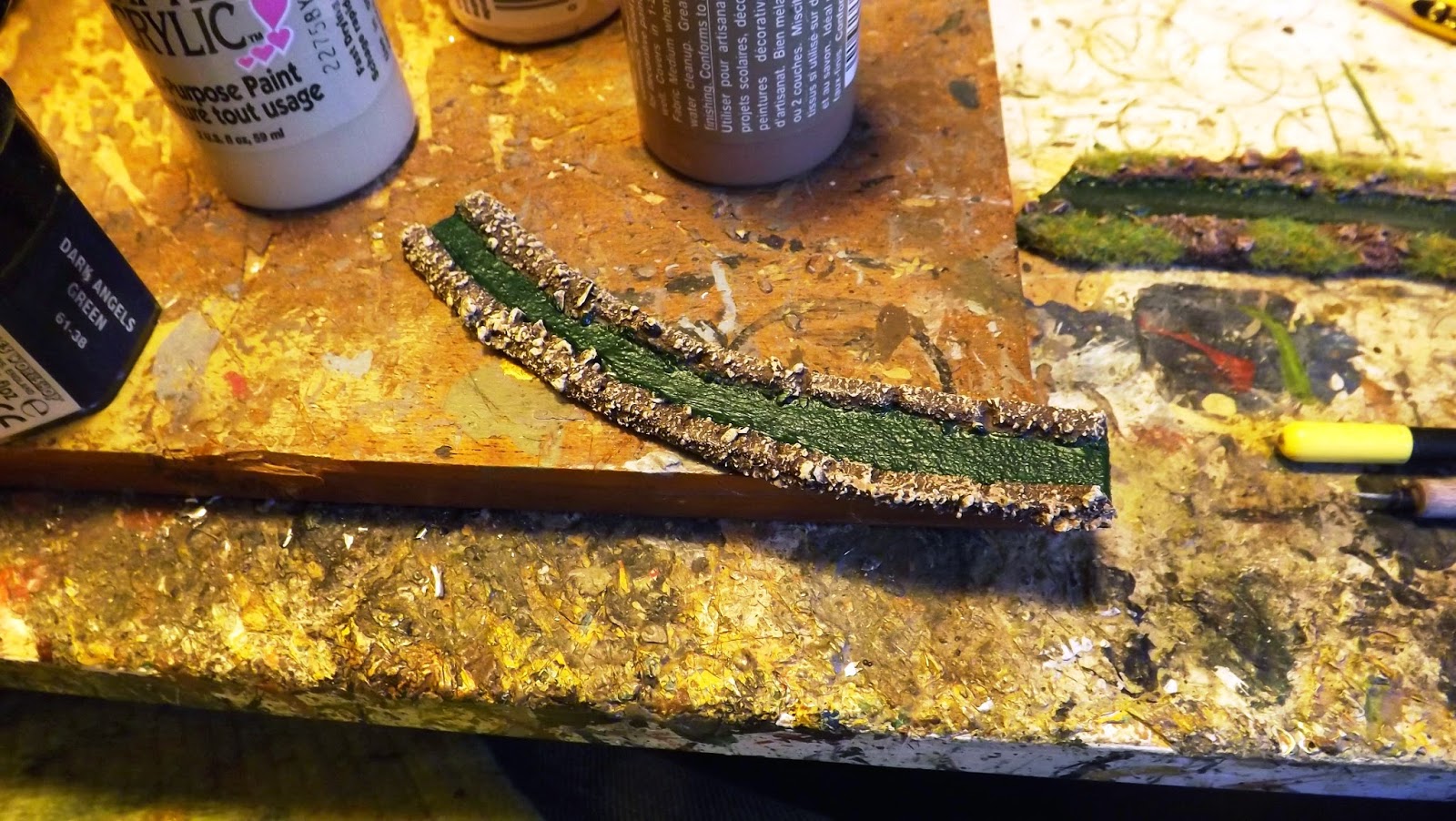 Once the varnish was very dry, I then started to paint PVA along the banks and add two shades of static grass plus a few grass tufts of various shades to create an impression of reeds and rushes at the water edge. 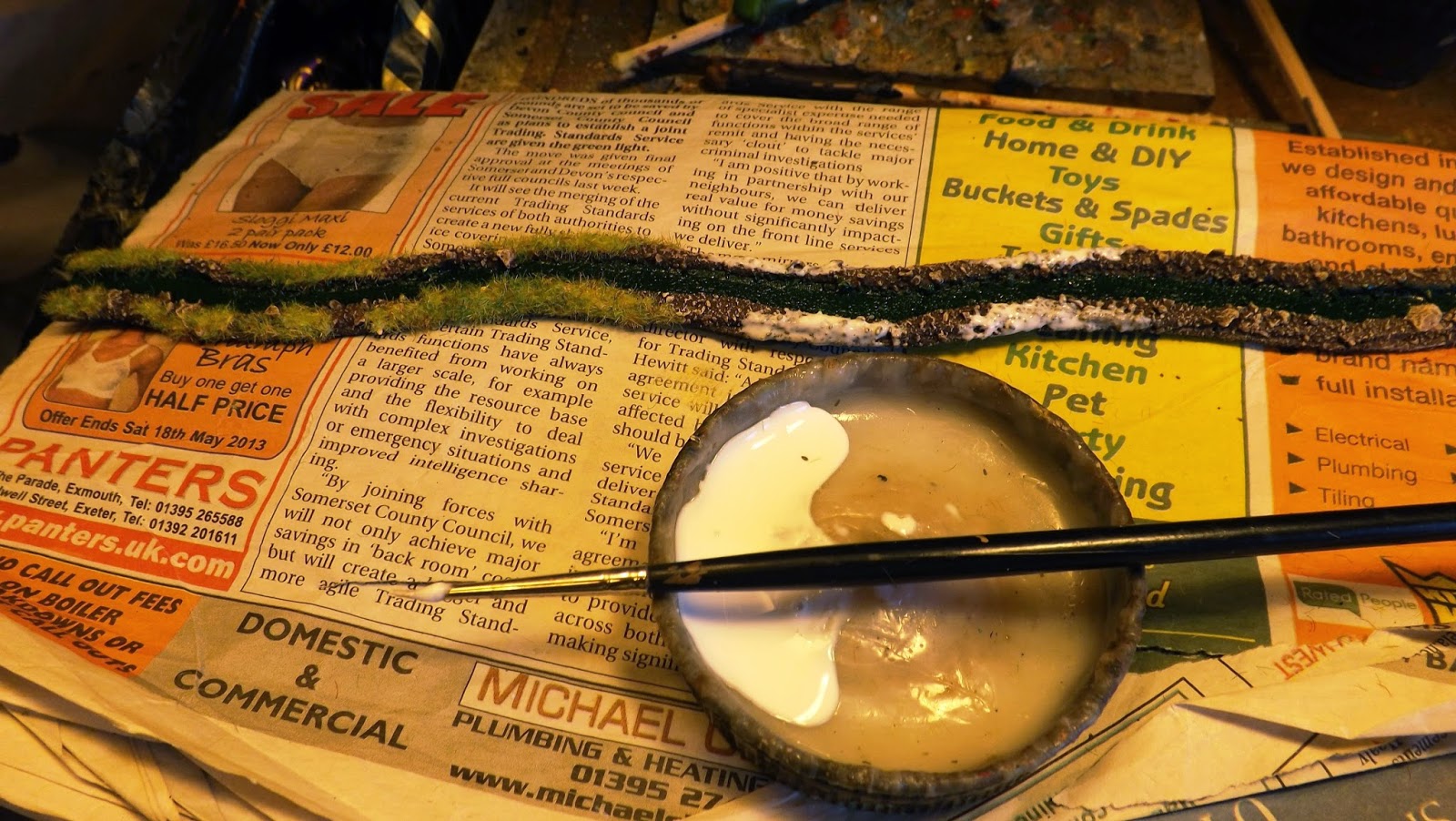 The finished sections can be seen below on the cutting board. In 18mm these little sections represent a noticeable stream as pictured in the photo heading this post. 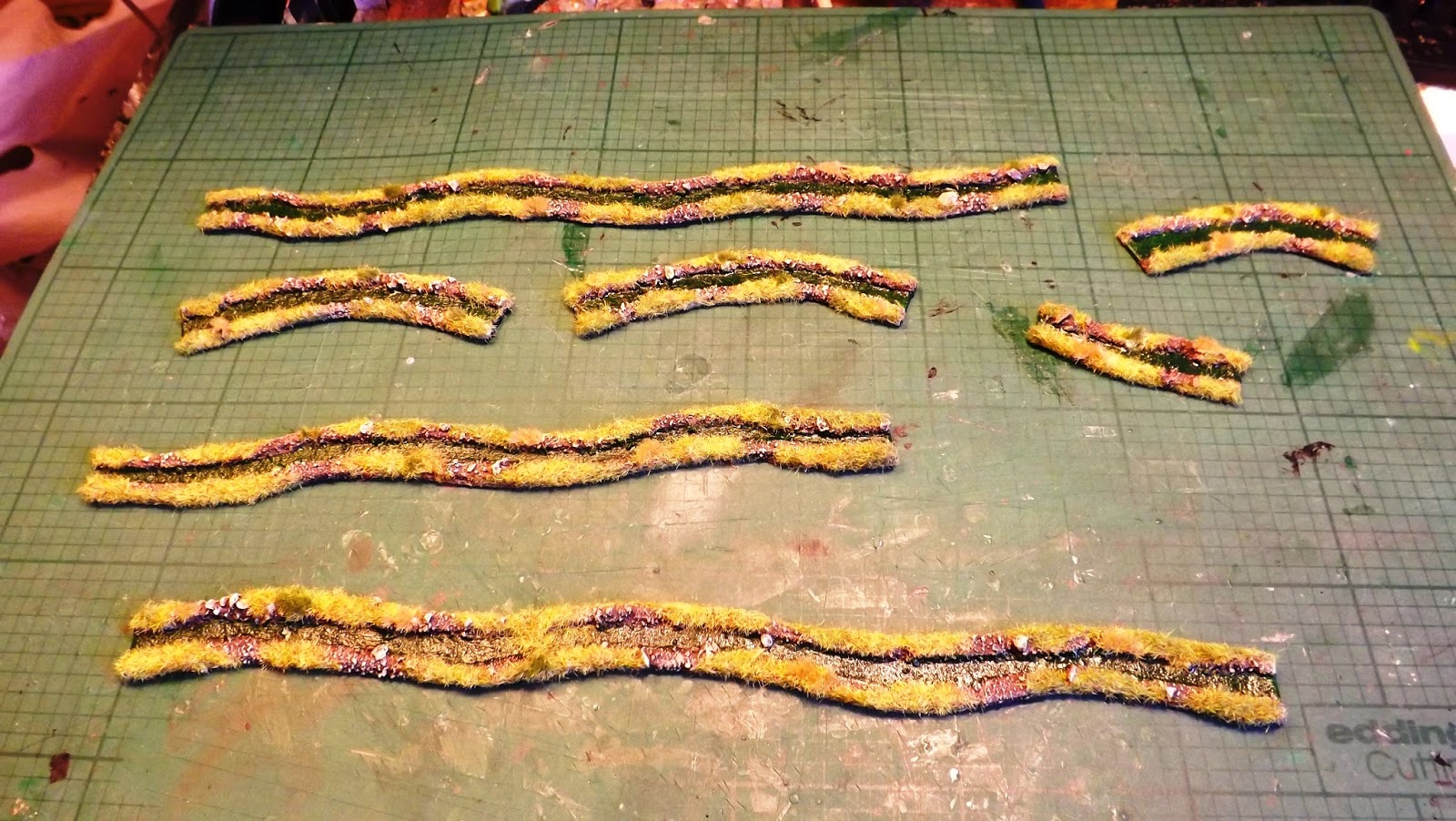 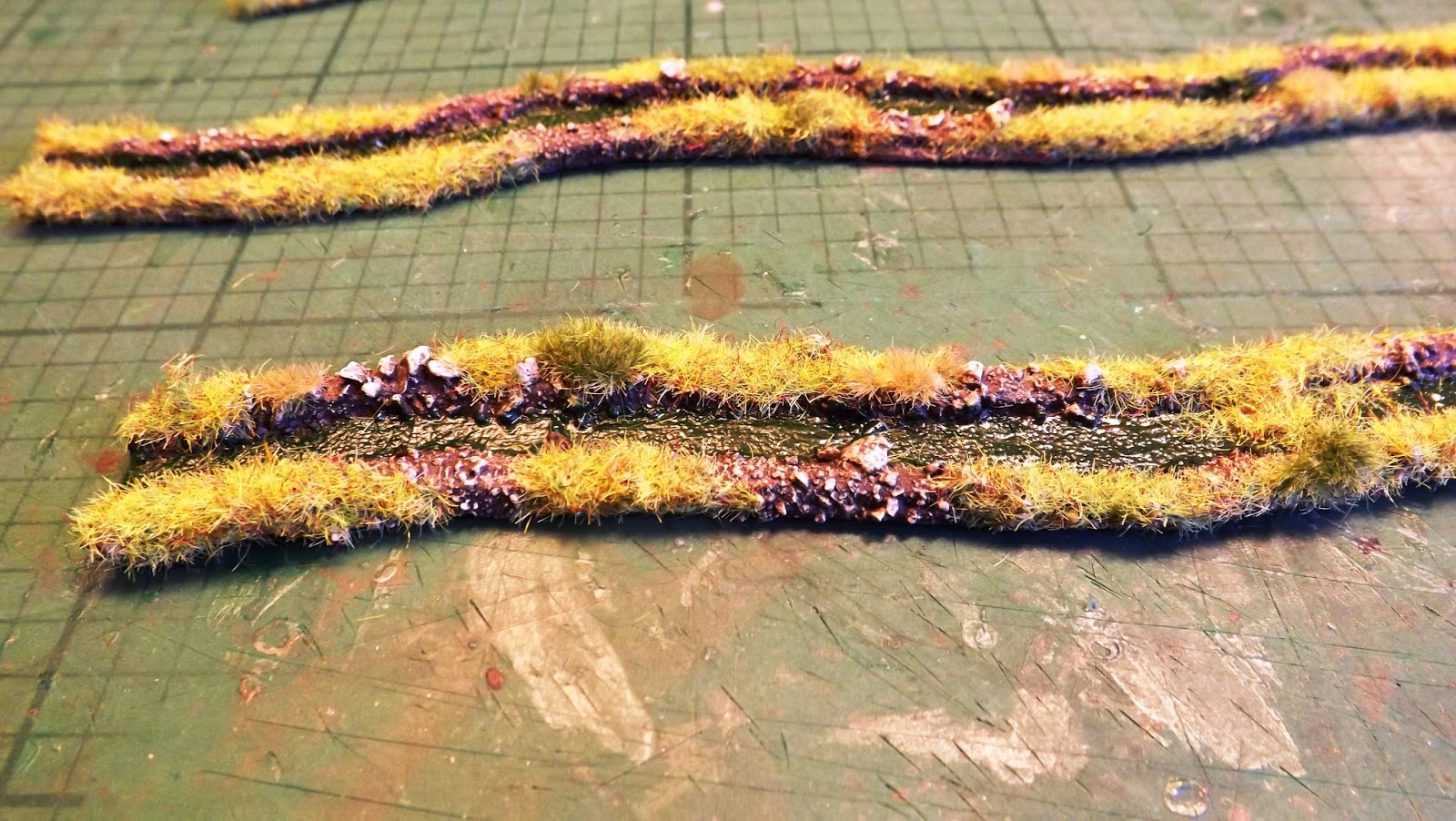 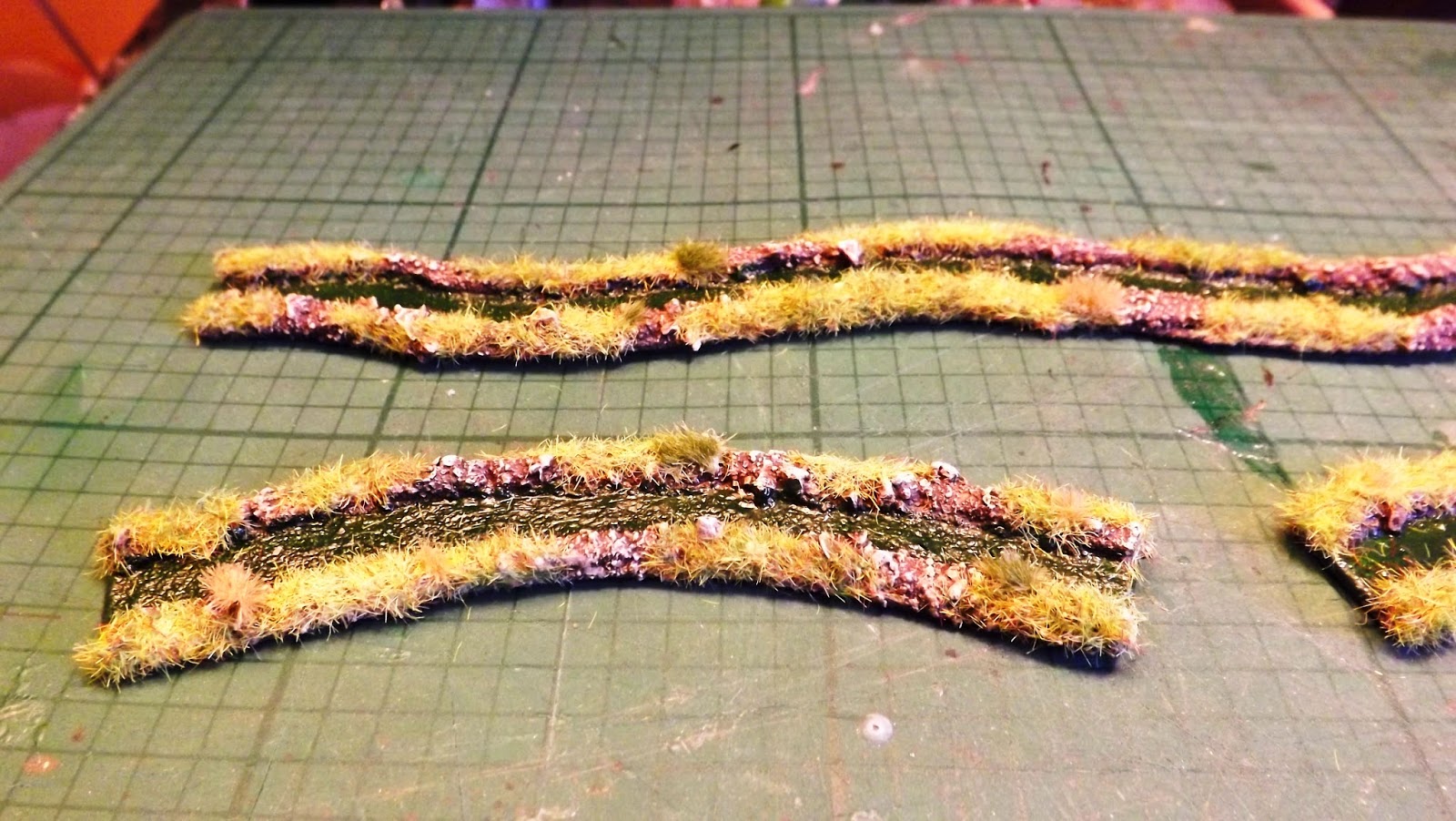 The really great thing about these roof felt streams is that they remain flexible and I am able to get them to conform with my rolling terrain mat and with little dressmaker pins suitably disguised with a piece of clump foliage pin them in place so they don't get moved around in the heat of battle and they secure the mat in the bottom of the valleys. The pins also make sure the sections of stream stay aligned and the clump foliage softens the joins.


So that's the Portina done, just some roads and trees to come.

Next up, Talavera, the complete table build and the 2/4th Grand Duchy of Warsaw Infantry
Posted by carojon at 23:27