I really enjoy looking at the natural world and the creatures that inhabit it wherever I am, but I have to say I am not that familiar with the fauna in this part of the world.

That said I was unable to identify one of the dragonflies pictured, so if you know what it is please drop me a comment.

The first creature pictured is a very large emerald green wasp that I saw on the path as I wandered around the ancient ruins at My Son. This wasp has a particularly ghoulish way of attacking the host for its larva, the common cockroach, see the attached link for more fascinating detail.

My Son as well as being an attraction in its own right can be found among natural forest, that overgrew the site after its abandonment by the Cham and its use by the Viet Cong in the Vietnam War.

This terrain is a great habitat for butterflies and dragonflies that constantly crossed our path as we thread our way through the ruins. As you will see, I have attached links for more information where I have been able to make an identification.

The Blue Moon butterfly is large when compared to common British types and its languid slow flight with large black wings immediately catches the eye. However the bonus is when it opens the wings to reveal those iridescent blue circles surrounding the white moon like patches that give this stunning insect its name.

The dragonfly below was pictured rather hastily as Will and I were filming what I think are called locally, "Touch me not" plants whose feathered leaves closed immediately on being brushed by the finger.

I don't know what particular species this is, so please let me know if you know.

The song of the Magpie Robin is usually the first thing that draws your attention to this "blackbird" size bird (British readers will know how big that bird is), as the song is really captivating and explains, sadly why I have seen this beautiful bird in cages in Vietnam.

Thankfully this example had grabbed a high perch in the forest and was "giving it gravy" so to speak, as we passed by.

I pictured these two eye-catching dragonflies on my post about Hue City and I think from the links attached I have managed to successfully identify them as the Common Clubtail, for obvious reasons, and the Tiger Dragonfly with its rather distinctive wing patterns.

Some of the creatures observed have turned up at the most unexpected times, particularly when my attention has been focused on things of a military history interest.

The next two examples are typical of the situation described where in the first case I was peering into a reconstruction of a bamboo improvised booby-trap at the Cu Chi Tunnels when I noticed this golden brown "beastie" manoeuvring between the bamboo barbs. 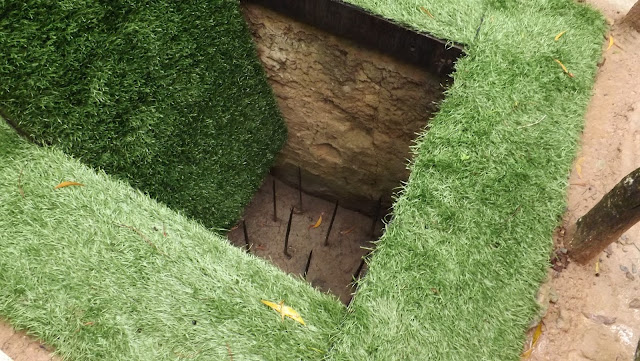 Millipedes are one of the oldest creatures around with a fossil of one variety dating back 420 million years ago. They are relatively harmless but should be treated with respect as they can produce a toxin that can cause skin irritation when they are alarmed.


Like wise while checking out the hardware on display at the War Remnants Museum in the former Saigon, a loud squawking call from the trees above drew my attention upwards, to be rewarded with a sight of the magnificent Pied Hornbill seen below.

Reports to follow on the tunnels and museum together with an update on that Vietnamese T54 (59) pictured at Long Khan earlier in the holiday.

As a traveller from "blighty" these rather exotic creatures provided much entertainment in trying to identify and moved me right out of my comfort zone when looking at the more familiar British examples.

Next up, the last post from Vietnam 2016 looking at the war in more detail at the Cu Chi Tunnels and the War Remnants Museum, followed by a book review after two weeks of holiday reading.
Posted by carojon at 06:21