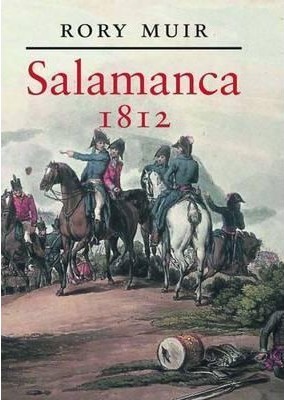 I have a couple of Dr Rory Muir's books in the library, Wellington's Peninsular Army and Tactics and the Experience of Battle in the Age of Napoleon, and have found his writing both insightful and, equally important, easy and engaging to read. See below for my thoughts on those books.

Thus when I saw this title was by the same author, it was a simple decision to get a copy and it accompanied me on my holiday to Vietnam this summer.

The Battle of Salamanca in 1812 was perhaps the Duke of Wellington's finest battle, seeing his Anglo/Allied army of about 51,000 men decisively defeat a French army of about 50,000 men, inflicting casualties of over 25% with estimated losses of about 12,500 men killed, wounded or taken prisoner and with four regiments losing more than half their strength in the battle; this whilst Anglo-Allied casualties were kept to about 10%, losing an estimated 5,220 casualties, all causes. The victory catapulted the reputation of the Duke to heights not seen since the glorious victories of the Duke of Marlborough.

The victory sent shock waves through the French forces engaged in the Peninsula struggle, after seeing, for the first time in over a decade, a French field army of such size decisively broken and routed from the field of battle, prompting the famous tribute from one of the vanquished French generals, General Foy:

"the battle of Salamanca is the most masterly, the most considerable, allowing for the number of troops, and the most important in its results, battle that the English have gained in modern times. It raises Wellington almost to the heights of the Duke of Marlborough. Previously one recognised his prudence, his choice of positions, his ability at using them; at Salamanca he showed himself a great and able manoeuvrer; he kept his dispositions hidden almost all day; he watched our movements in order to determine  his own; he fought in oblique order; it was like one of Frederick the Great's battles."

One would think then that such a decisive and important battle such as Salamanca would be well enough documented by the numerous participants to allow the historian to easily piece together the sequence of events that developed the characteristic choreographed movements that go to make up the story of a battle of this period.

One only needs look at the timed sequence of events that have been told and retold about the Duke's last and most complete victory at Waterloo to see how these events relative to each other allow the picture of the battle to be created in the minds eye of the general reader.

The Battle of Salamanca was a technically superior victory to Waterloo, carried out with daring conception and skillful execution compared to the slogging match of the latter battle, however as Dr Muir illustrates most skillfully, Salamanca well illustrates the Duke's famous quote about the history of battles being like the history of balls;

" The history of a battle, is not unlike the history of a ball. Some individuals may recollect all the little events of which the great result is the battle won or lost, but no individual can recollect the order in which, or the exact moment at which, they occurred, which makes all the difference as to their value or importance..."

As someone who enjoys understanding how a battle developed and the forces at play that caused it to develop in the way it did, I am always on the lookout for books that forensically break down battles in such a way that informs me in the construction of my games and the scenarios I create to model the historical event and Rory Muir's "Salamanca 1812" is one of those books.

However the caveat to my previous statement is that the story of Salamanca as re-told over the centuries since it occurred is based on a very incomplete and often contradictory historical account. Thus Muir sets out to retell the story of the battle breaking the events up into the established timeline of key points which form the basis of each of his chapters. After each account he then looks at the original sources available to determine, based on those sources, the validity and timings of the accounts we have had passed down to us. It is then that the Duke's astute insight comes to mind as again and again the sources contradict or have such large omissions that one is forced into a lot of educated guess work.

To support this educated guess work and begin the detective work of piecing together possible scenarios, Muir stresses the importance of battlefield walking, from which he has been able to gauge likely approach routes and the impact terrain would have had on the combats related in the source material.

Thus we are presented with the evidence with all its contradictions together with the ground on which the combat is assumed to have taken place and an analysis of the formations and likely position of the forces engaged, summarised with the casualties and outcomes, again with all the contradictions that data brings from the various sources.

Thankfully we have Muir's expert opinion to guide the reader through the most likely of events, with excellent diagrams and maps to help illustrate what is assumed to have happened.

So in detail the book is laid out in the following structure;
Chapter One - The Campaign
Chapter Two - Armies and Generals
Chapter Three - Preliminary Manoeuvres and Skirmishing: Morning and Early Afternoon
Chapter Four - Pakenhan and Thomieres
Chapter Five - Leith and Maucune
Chapter Six - Le Marchant and the Destruction of the French Left
Chapter Seven - Collapse and Recovery in the Centre
Chapter Eight - Pack's Attack on the Greater Arapile
Chapter Nine - Ferey and the French Last Stand
Chapter Ten - Foy and the French Retreat
Chapter Eleven - The Victory
Chapter Twelve - The Aftermath
Chapter Thirteen - Consequences

The book has twenty-nine illustrations and photographs to accompany the text, with the battlefield photographs really useful for understanding the terrain on a battlefield little changed in two-hundred years.

In addition there are nineteen really useful maps that accompany the chapters and that I found very helpful in allowing me to follow the text.

As you can see from the listed chapters the battle is broken down into the individual combats that made the whole battle and I would suggest this is a must have title for those interested in breaking Salamanca down into more easy to handle wargame actions. This together with some excellent detail on the armies and their commanders should allow for all those tweaks in morale/training ratings and commander ratings we gamers need as much information on to make those calculations.

As you might have guessed, I really enjoyed reading this book and it will definitely be my turn to reference when I get on to re-fighting my own version of Salamanca.

The book has 322 pages excluding the preface, contents index and lists of illustrations, maps and abbreviations. There is a copious list of the sources referred to in the text, essential in a well researched piece of history.

The book was published in 2001 and is readily available in hardback and paperback with mine being a second hand hardback ex library book through Amazon for £20.63 inc post and packing.

Recommended reading for the Peninsular War enthusiast.
Posted by carojon at 23:25